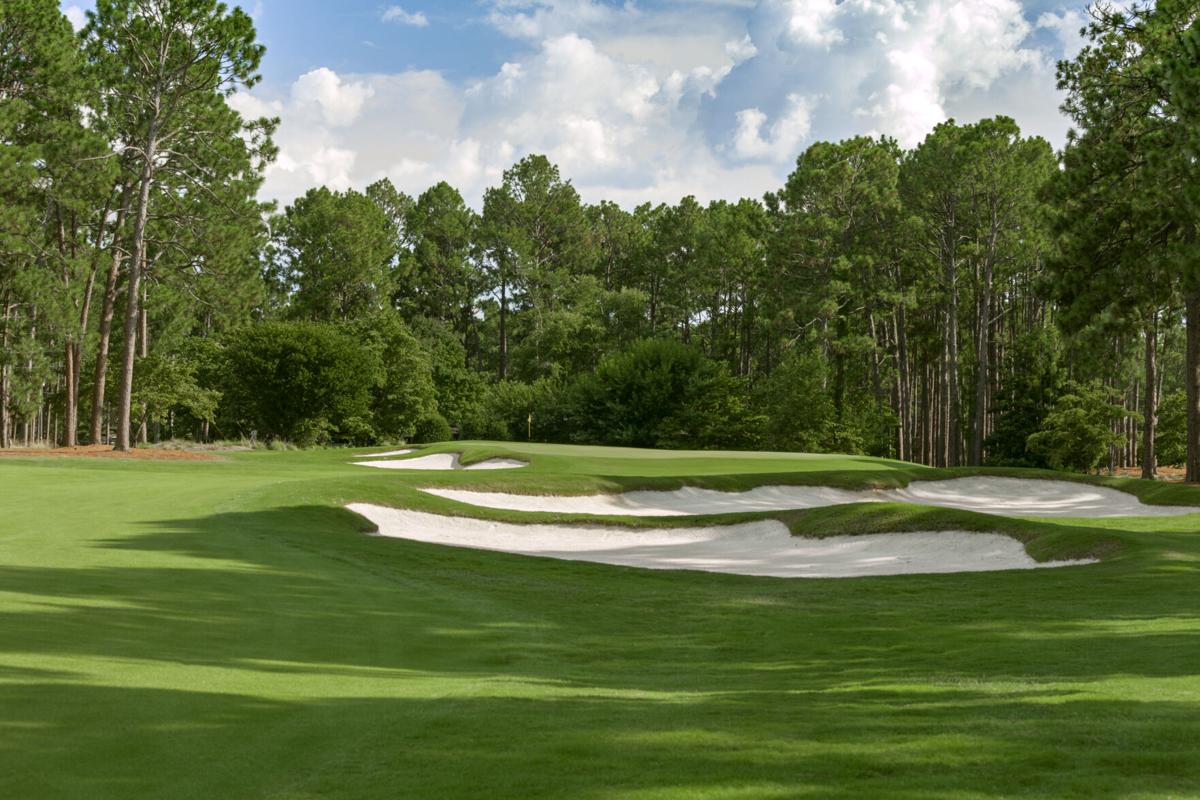 The 10th hole of the Country Club of North Carolina Dogwood Course. 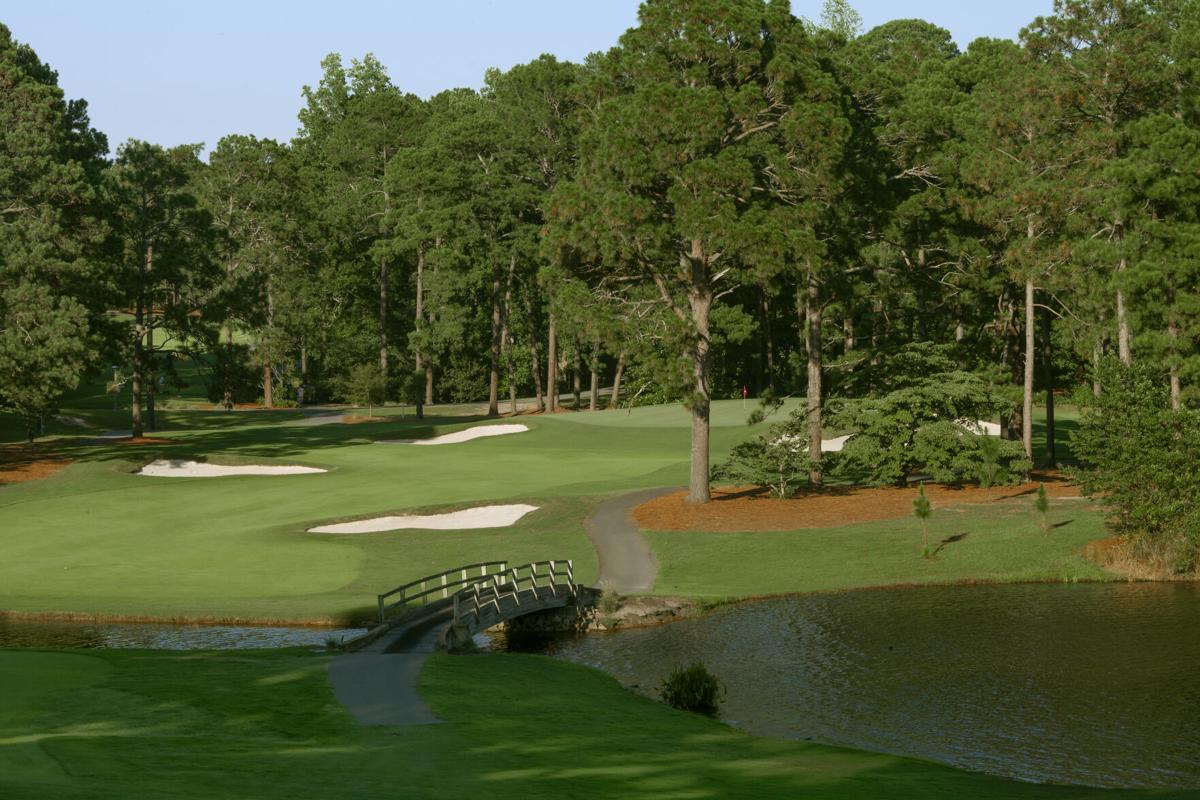 The 11th hole of the Country Club of North Carolina Dogwood Course. 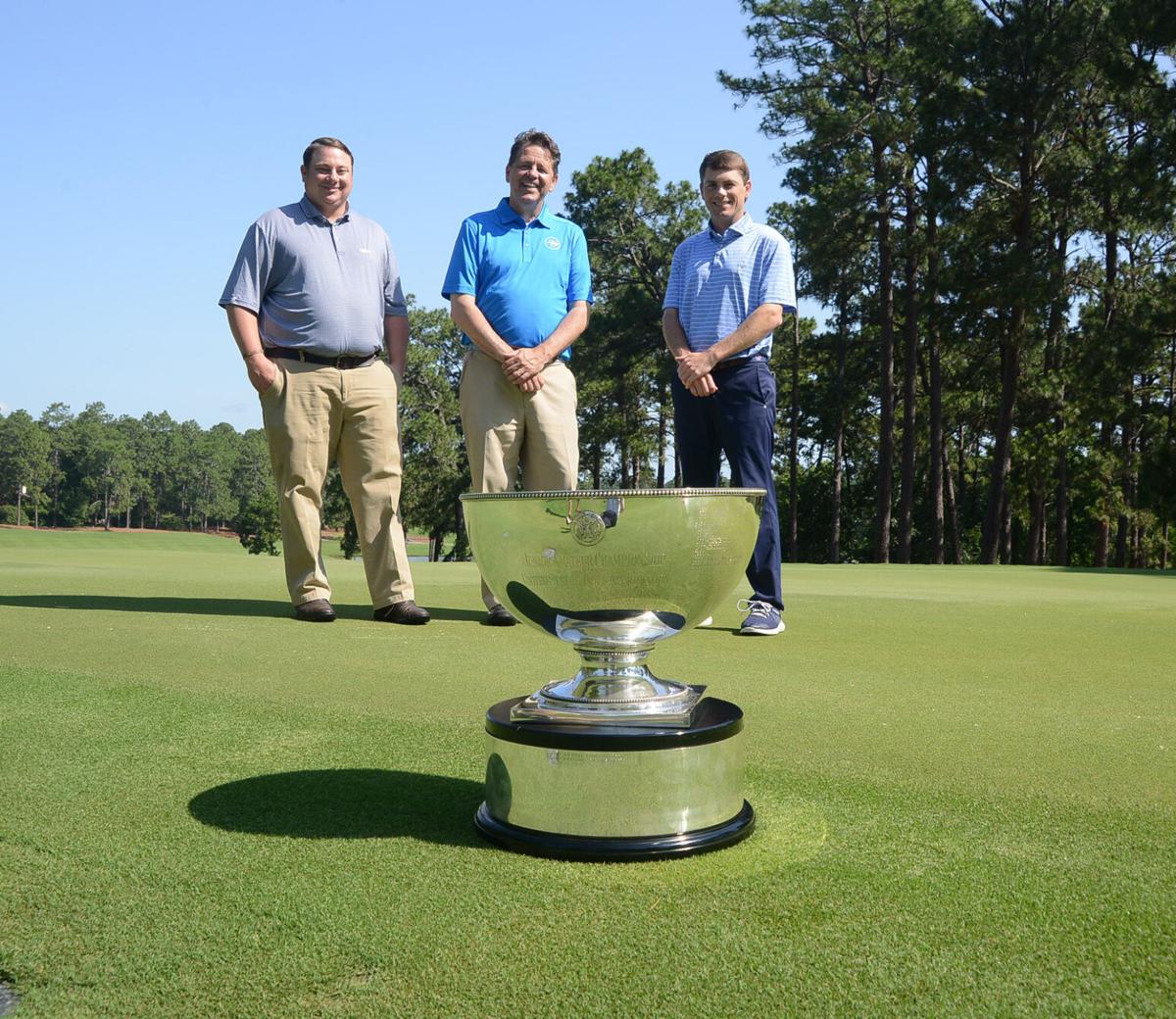 Representatives from the USGA and the Country Club of North Carolina pose behind the U.S. Junior Amateur trophy on the 18th green of the Dogwood Course. After four years of prep work, the club is ready to host the top 264 junior golfers in the country for what is the “U.S. Open for junior golf” starting Monday. Pictured from left to right are Greg Sanfilippo of the USGA, Don Hunter of CCNC and Reese Moseley of the USGA.

It started as a thought four years ago when the idea of the Country Club of North Carolina hosting a U.S. Golf Association championship again for the first time in over a decade was initially pitched to the membership.

Now CCNC is on the precipice of making history.

The best 264 junior golfers in the country will compete at CCNC this week – starting with stroke play on Monday and Tuesday, and finishing with six match-play rounds from Wednesday to Saturday – in the largest U.S. Junior Amateur field in the championship’s 73-year history. Also a remarkable feat for the championship will be played on two courses, the Dogwood and Cardinal, to accommodate the larger field.

“When you think about this amount of players and the logistics that go into it, it’s taken every bit of four years to get this done right,” said CCNC Chief Operating Officer Don Hunter.

The field will be star-studded with golfers who are years away from competing on the PGA Tour, and this comes as one of the last chances to watch them play in person for free. There will be no charge for admission to the championship. Anyone wanting to come watch the action, can park at Pinecrest High School and take a complimentary shuttle to the club that runs daily from 5:30 a.m. until 8 p.m. Masks must be worn inside the shuttle, regardless of vaccination status.

More fan information can be found at: https://www.usga.org/content/usga/home-page/championships/2021/u-s--junior-amateur/articles/fan-info.html.

Last year’s championship was canceled due to COVID-19, the missed feeling of crowning a champion will return to people, like Greg Sanfilippo, the USGA’s director for the championship, who put in the years of work to host the championship across the country.

“Usually when we hand out that trophy, the hairs will stick up on my arms. It’s just so awesome to see this life-changing event that we are all a part of,” Sanfilippo said. “You look at the CCNC staff and the USGA staff all coming together and operating under one logo, which is the championship logo, and it’s nice to be able to do that. I missed that last year.”

The large field required an infrastructure at the club to accommodate the influx of golfers, and CCNC checked off the boxes needed to hold the large number of participants.

“Starting four years ago when we went through our future sites process, we started with the golf course, and then we work ourselves in,” Sanfilippo said. “We look at if it can host 264 players for dining and if it has the practice facility and the range to accommodate that. Don and his team have been planning for four years to prepare for 264 players. We’ve got great infrastructure and a great team here.”

And in doing so, the USGA wanted to do it in a safe fashion in accordance with local and state health guidelines.

“What we did remain strong on was limiting those who would have access to the clubhouse,” said USGA’s director player services Reese Moseley. “We want to protect the players at all costs.”

Now the last-minute preparations by the club and the USGA involve finishing the final touches on the plans that are put in place.

More than 700 local volunteers went through training Thursday and Friday in preparation for the championship, and even then there were a number of applicants that were turned away to help, Sanfilippo said.

CCNC announced earlier this week that Subway has donated more than 2,000 meals for the volunteers for the championship.

The 264 golfers in the field will be trimmed down to the top 64 after two rounds of stroke play on Monday and Tuesday. The Dogwood Course will host the match play portion of the championship from Wednesday to Saturday’s 36-hole final, and its four-hole closing stretch is expected to play a big part in who leaves with the U.S. Junior Amateur trophy Saturday evening, Sanfilippo said.

While this is the third USGA event that CCNC has hosted, behind the scenes it’s a community effort.

“It’s not just CCNC in this championship alone,” Hunter said. “We’ve had great cooperation with our friends at Pinehurst with volunteers that have worked the Open and the Women’s Open. We’re kind of all in this together and when it’s their turn, we will be behind them as well.”

Hunter said that plans have been made to prepare the club and the championship for any possible scenario that could arise after four years of preparation for this unprecedented championship for CCNC and the USGA.

And just like the prep work, the six days of golf are expected to be just as remarkable. The winner takes home the trophy and gold medal, and bids into the next two U.S. Amateur championships as well as a spot into the 2022 U.S. Open at The Country Club in Brookline, Massachusetts.

“With the players that will be competing here, history will be made,” Moseley said.