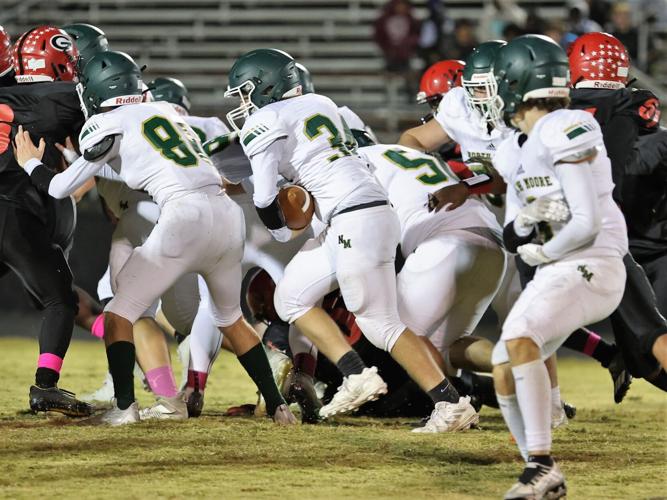 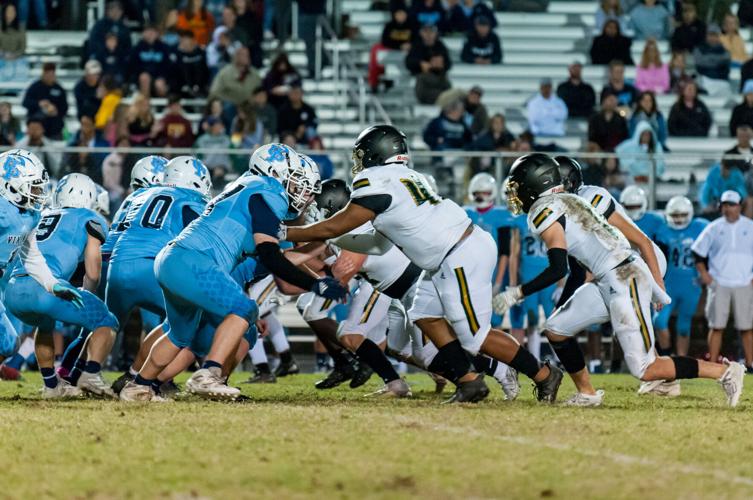 There was plenty of action in the trenches during the “Battle of the Pines,” a Sandhills 3A/4A Conference game between the Union Pines Vikings and the Pinecrest Patriots last season.

The last five times that Pinecrest and Union Pines have faced off on the football field has been lopsided, to say the least.

The Patriots have reeled off five wins with an average margin of victory of nearly 47 points per game over their rivals from Cameron, dating back to 2008. This year’s matchup brings one of the best teams in Pinecrest history, on the cusp of claiming the school’s first outright conference football title with a win, against a Union Pines squad that has hung around with some of the Sandhills Athletic Conference’s best teams in recent weeks.

Kickoff for the first matchup of the Battle of the Pines in Southern Pines since 2010 is set for 7:30 p.m. Friday.

Even with the noise that comes around a rivalry game, Pinecrest (7-2, 5-0 Sandhills) is trying to keep it business as usual in the final week of the regular season.

“We are getting ourselves better for not only Union Pines, but down the road as we continue to do. Just focusing on the big picture, it’s a chance to wrap up a perfect conference season. That’s what we want to do and it’s obviously not been done before, so they want to continue to break those records or set those new marks, however you want to put it,” Pinecrest coach Nick Eddins said. “That’s what their focus is, and Union Pines is just the next opponent that we’re trying to do that with.”

On the outside looking in as far as the playoff picture for the 3A classification, Union Pines (3-6, 1-4 Sandhills) needs a win and some help to keep the season going. Facing off against its green and gold clad rivals doesn’t require much more of a pep talk leading into Friday.

“The guys know that it’s Pinecrest, the neighborhood rival as far as that goes. The kids are excited about it. We didn’t fare too well last year,” Union Pines coach Jason Trousdale said. “We’re excited about the opportunity. It’s going to be a very good environment, and we’re going to treat it like it’s the Super Bowl.”

Pinecrest comes into the matchup after claiming another convincing win over Hoke County last week. With an offense back to full strength behind junior quarterback Mason Konen, and a stable of running backs, the Patriots’ balance makes them hard to stop.

Konen has passed for more than 1,200 yards and 10 touchdowns. Three running backs, seniors Nahjiir Seagraves and Brandyn Hackett, along with sophomore Zymire Spencer, are averaging more than 6.9 yards per carry behind a veteran offensive line, led by Seagraves with 833 yards and seven scores. Senior Hunter Neifert has been a top target in the passing game with 33 grabs for 706 yards and seven touchdowns.

The Pinecrest defense has allowed 17.8 points per game on average to its opponents in conference play.

“I think I’ve said it week in and week out about these teams that we’ve played. Obviously they are really good, they’re undefeated in conference,” Trousdale said. “Now that I’ve watched everybody, they’re really good at every position and they are the best team in the conference.”

The Vikings have built confidence from losses that were closer than last year’s margins against Scotland, Richmond and Hoke County, and a win over Southern Lee last week.

Eddins and his staff who are facing Union Pines for the first time know that the 64-6 margin last year can’t make the team complacent.

Union Pines’ varying offense has centered around athletic junior Ethan Biggs with more than 500 yards rushing and more than 400 yards receiving. The Vikings’ offense has gone through changes this season, with Ben Finkelstein moved from quarterback due to injury, and now playing several positions on both sides of the ball.

Christopher Gilbert has had a nose for tackles this season as the team’s leader in stops. He also had a pair of fumble recoveries in a strong defensive game for the Vikings against Southern Lee.

“The kids are excited about the way we were able to play defensively. We forced seven turnovers,” Trousdale said. “(Southern Lee) has got a ton of athletes and to hold those guys to seven points says a lot about what we did defensively.

“Our kids should be confident going into this game,” Trousdale added. “They know this is going to be a tall task and nobody expects us to win the football game, but the score starts at zero, and we’re going to give it our best to be victorious.”

Eddins is no stranger to big rivalry games, having coached in the West Montgomery and East Montgomery rivalry before coaching in the Shelby versus Crest matchup. Those weeks always provided a lift for him as a coach.

“The in-county stuff, the kids get a little more juiced up. When the kids have got the juice, as a coach a lot of times you’ve got to bring the juice and they feed off of you, but rivalry week the kids already bring the juice,” Eddins said. “The juices flowing and the excitement in the air is always second to none.”

Pinecrest has won the last six meetings in the series, with Union Pines’ last win coming in 2006.

North Moore’s chance to accomplish feats that haven’t been attained since the 1990s comes down to matchup against a familiar foe Friday at home.

The only thing standing in the way of North Moore’s first outright conference title since 1996, and the first undefeated regular season since 1994, is rival Chatham Central for a 7:30 p.m. kickoff.

"We've had a really good week of practice, and last week I feel like we didn't," North Moore coach Andrew Carrouth said. "I really challenged the guys on Friday night after the game with Graham that we've got to practice better. This week, we've been pretty competitive."

North Moore (9-0, 5-0 Mid-Carolina) has won 11 regular season games in a row, dating back to last season, and is one of two 1A teams still unblemished heading into the final week of the regular season.

"I think for our guys, just confidence and playing with a lot of swagger," Carrouth said. "One of the things we've been stressing to our team is that you can throw the records out when Chatham comes to town. We've got to come and bring our 'A' game."

The Bears’ (1-8, 1-4 Mid-Carolina) lone win this season came in a 21-7 victory over rival Jordan-Matthews, and offense has been hard to come by for Chatham Central, averaging less than seven points per game this season.

Seniors Malachi Moore and Trey Clay have played a big role on offense carrying the ball.

North Moore has won seven of the last nine matchups against the Bears, including a 36-6 win last year.

The game marks the final regular season home game for 16 seasons on the North Moore roster.

"It's such a special group that's changed the face of North Moore football," Carrouth said. "Just an incredible group of young men. They're unselfish playing as a team and they don't want to be a star, they want our team to be a star. We're going to miss them, but we want to keep this ride going as long as we can with them."

Get unlimited digital access and support award-winning local journalism, for just 9.50 +tax a month. This includes access to the electronic replica edition of The Pilot.

Check your email for details.

Submitting this form below will send a message to your email with a link to change your password.

An email message containing instructions on how to reset your password has been sent to the e-mail address listed on your account.

Your purchase was successful, and you are now logged in.

A receipt was sent to your email.

This offer is currently unavailable.