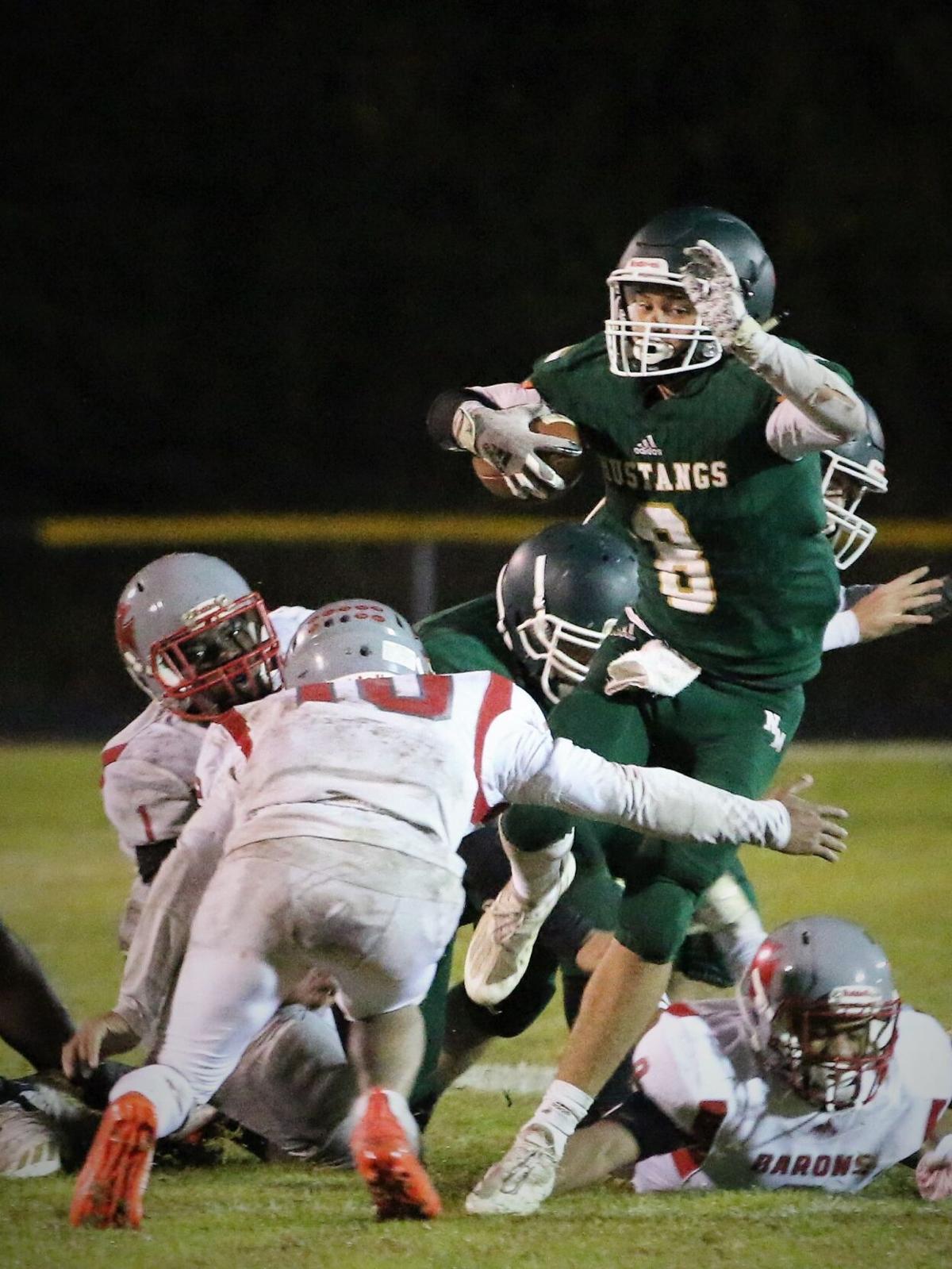 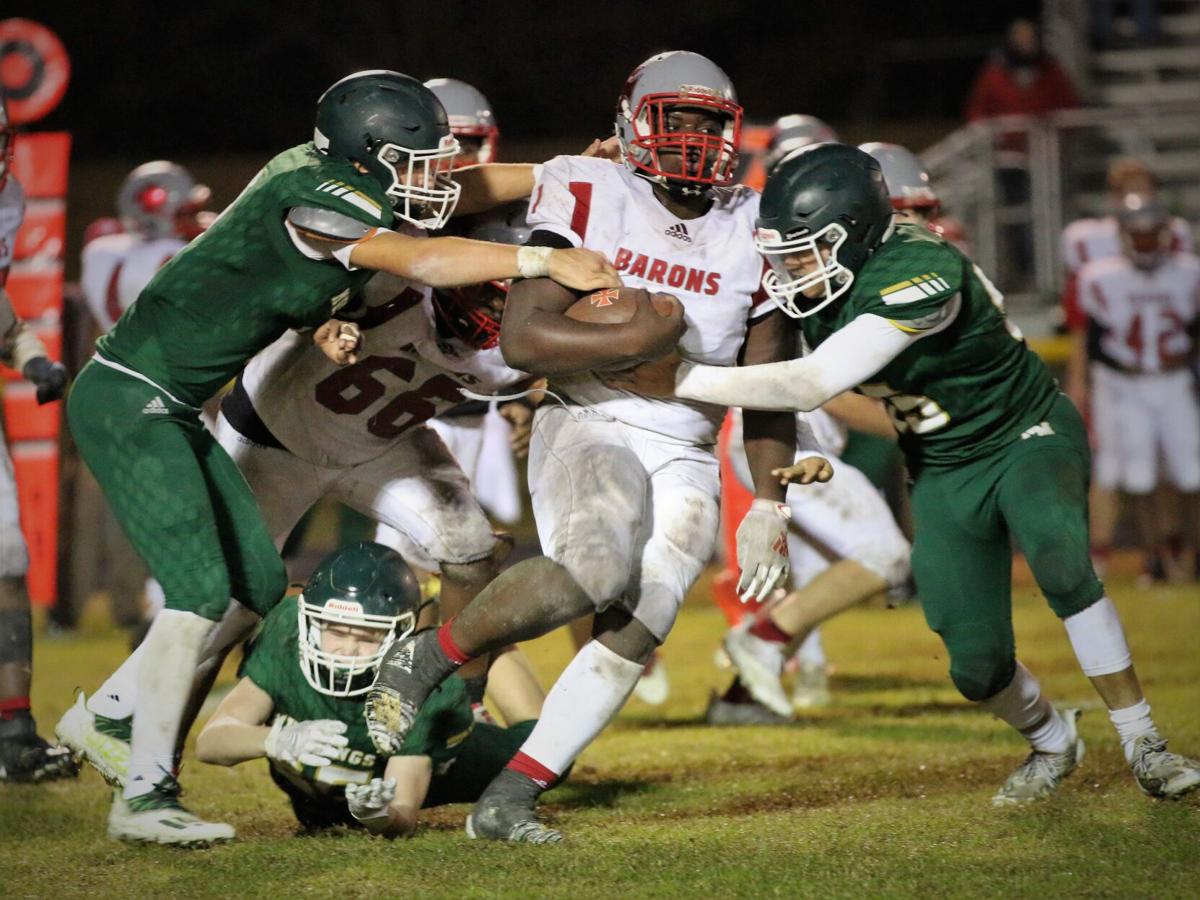 North Moore's Drew Brewer and Jonathan Brown converge for a tackle on Gates County's Damari Cooper (1) in the second round of the 1A state football playoffs at home Friday. The win over the Red Barons gave the Mustangs their first playoff win since 1996.

The North Moore football team has built up a reputation locally with their style of play. Hard-nosed and blue-collar like the area the players have grown up in, the Mustangs take pride in power running the ball and a stifling defense.

The state playoffs bring teams that aren’t too familiar with each other together, but the Mustangs’ second-round opponent in the 1A N.C. High School Athletic Association Friday, Gates County, brought a lot of the same mentality that North Moore prides itself on.

“I just think that with our mindset, we were more locked in, we were more physical,” junior offensive lineman Kael Freese said. “We stayed lower to the ground and we hit them in the mouth.”

By setting the tone in the second quarter, and carrying it over into the second half, North Moore won its first playoff game in 25 years, 30-8 and did so in the first home playoff game in just as long. The Mustangs remain at home in the third round of the playoff next Friday against Pender.

“It’s survive and advance right now. We told our guys this whole week that it’s not going to be pretty, and a lot of times it’s going to be very ugly, but you’ve got to do what you’ve got to do to be successful,” North Moore coach Andrew Carrouth said. “They kind of tested our resolve a little bit. We did a great job of executing our game plan.”

North Moore (10-1) stood tall on the defensive side of the ball, despite being undersized against a handful of Red Baron (4-5) ball carriers. A collective group of Mustang defenders limited Gates County to one score, while the visitors rushed for 278 yards.

Run People Over, better known as “RPO” by the team, is the mentality and those three letters were painted with white paint in both end zones to send the message to visiting Gates County.

“We just came in with the mindset that we were just going to outplay them,” sophomore lineman Sawyer Nall said. “We just had to keep moving onto the next play. We couldn’t help what happened so we went out and hit them in the mouth again.”

North Moore jumped on three fumbles, two on mishandled snaps, that set up the offense to score four rushing touchdowns.

Junior lineman Jase Nelson fell on a loose ball on defense, and was a part of the underclassman offensive line that cleared the way for 323 yards rushing for the Mustangs.

“We might not be the biggest, but we are the baddest around here,” Nelson said.

After both teams had empty drives in the first quarter, the opening play of the second quarter put the Mustangs up 3-0 when Miguel Lopez drilled a 41-yard field goal.

James Ross and Justis Dorsett had rushing touchdowns in the second quarter to make it a 16-0 lead at intermission.

To set up the Ross touchdown, junior Parker King made one of several momentous plays in the game. King, who was inserted into the starting lineup for the playoff contest, came in on a mishandled punt attempt by Gates County, rushing after Semaj Cross with open field and a chance to convert a first down with no other defenders in sight. The shoestring tackle by King forced a turnover on downs and set up a score two plays later.

“I was just trying to tackle him. I just grabbed his foot just a little, and he went down,” King said. “I was nervous at first because I hadn’t started all year and they needed me for the playoffs. I just stepped up and made some plays.”

King made a play to start the second half on an onside kick by the Mustangs the junior gathered while the ball bounced on the turf to send the North Moore offense back out. Dorsett scored his second touchdown four plays into the drive from 32 yards out to make it a 23-0 ballgame.

Dorsett rushed for 208 yards and three scores behind his offensive line, tight ends and blocking backs.

“They blocked great. The whole opened for about three or four yards and I was able to bounce it outside. It was there all day,” Dorsett said.

Ross and Jovanny Benitez-Cruz jumped on fumbles in the win for the Mustangs.

A packed home side of the stands at Vergil Shamberger Stadium on Friday rivaled a homecoming crowd, and the team mentioned how the energy could be felt in the biggest football stage they had played on.

“The adrenaline really starts pumping and it feels great to know they are supporting you,” Dorsett said.

“Can’t nobody beat us at our own game in our own house. It just ain’t going to work,” junior lineman Wyatt McNeill said. “We ain’t taking that disrespect.”