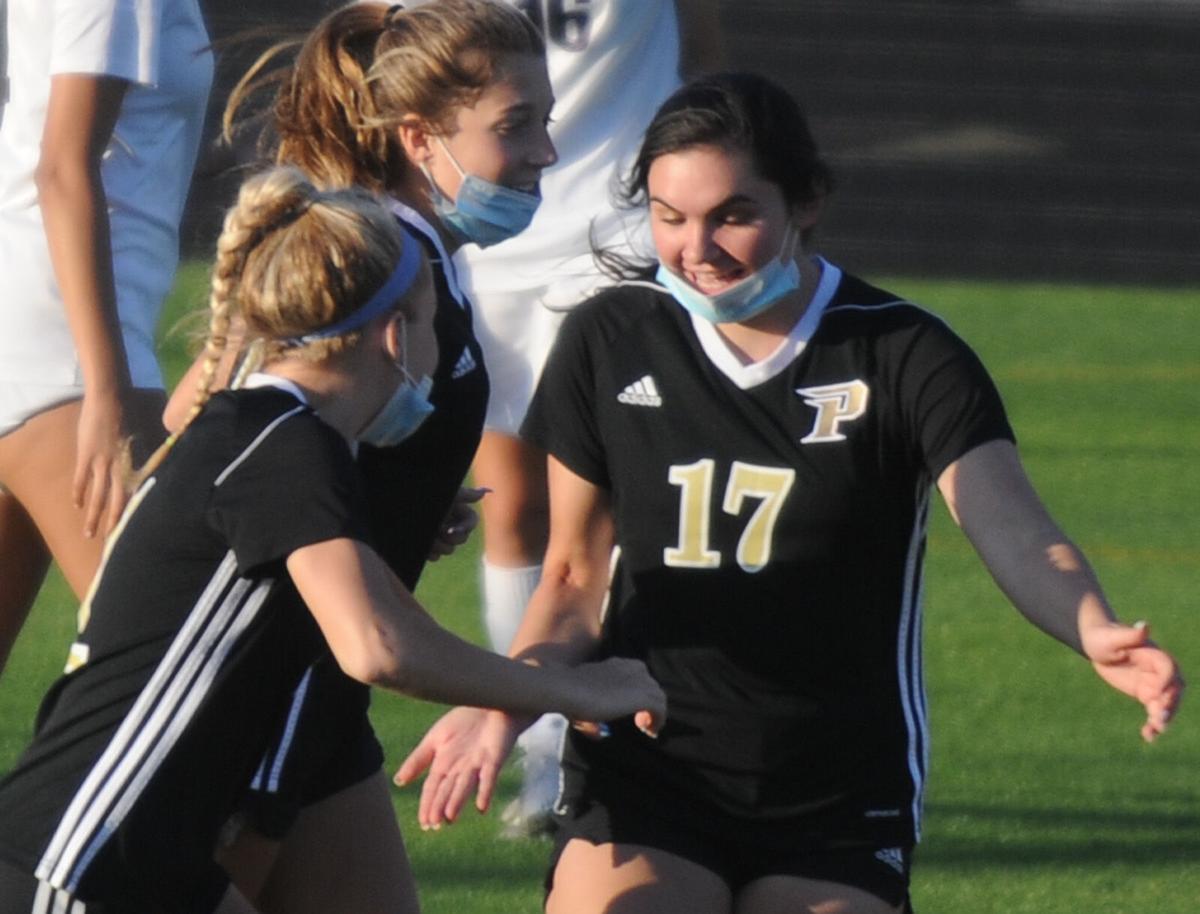 Pinecrest sophomore Savannah Dunahay (17) celebrates with teammates during the win over Jack Britt earlier this week. 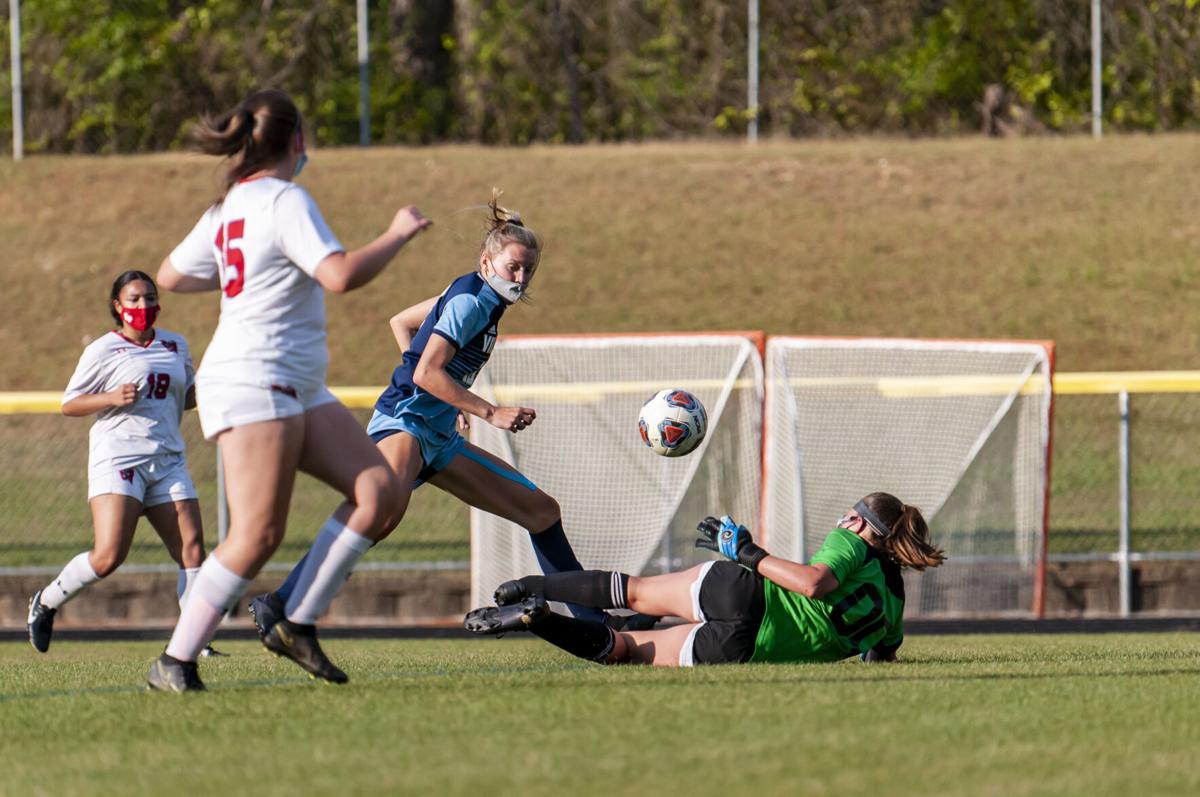 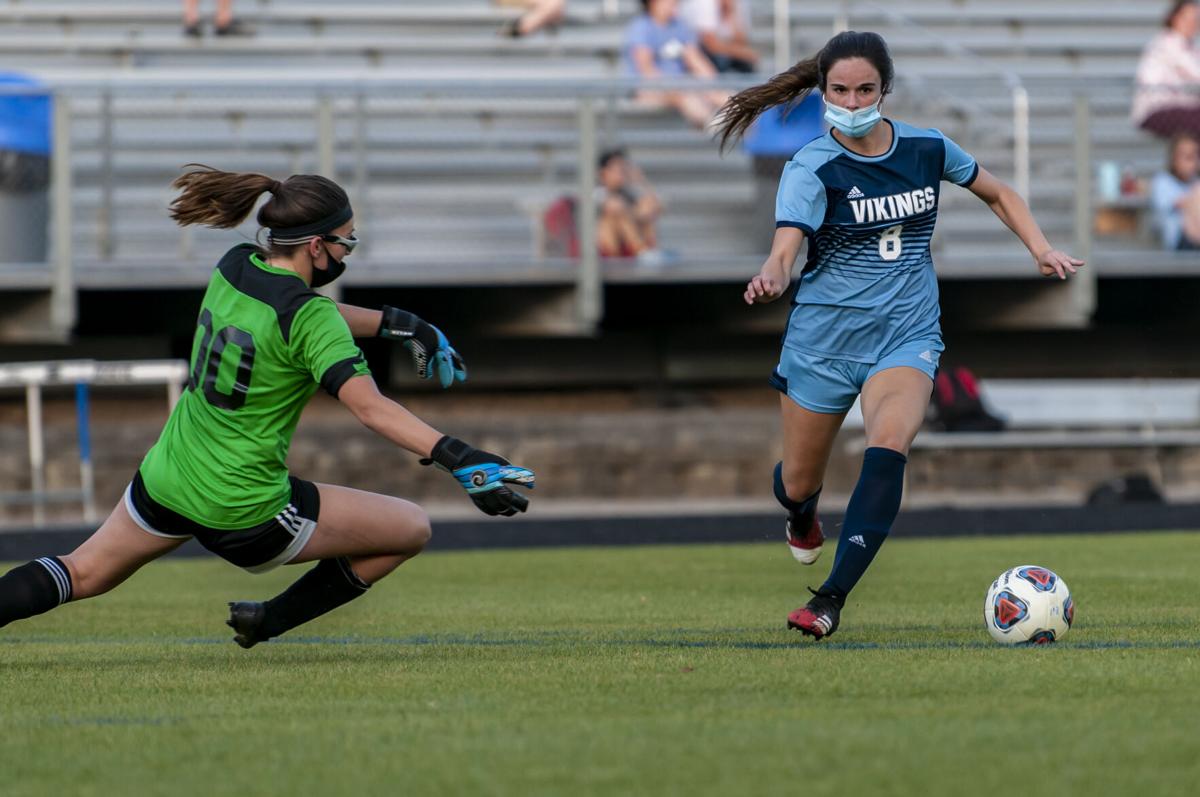 For the first time since the 2015 season, the Union Pines girls soccer team closed the regular season out with a perfect record as the Vikings claimed a 9-0 victory at home over Western Harnett Wednesday at home.

The regular season finale was another chance for the Vikings (13-0, 9-0 Tri-County) to use their passing and personnel that has made them so hard to defend on offense, and their pressure on defense rarely allows opponents to get chances to attack their goal.

“We’ve all played together so it’s kind of more team bonding than anything,” senior Emma Ring said. “I think if we just play as a team we will be fine in the playoffs and hopefully we can get a home game to start off.”

“She has really solidified the midfield,” Horwath said. “She’s been scoring a lot the last couple games. Teams are so focused on Emily Bowbliss that she’s scoring because she is getting open because they’re not worried about her. It’s hard to mark two people.”

The spreading of the offensive load is what Ring has been pleased with as a senior leader the last few games to close out the regular season. Five of the goals scored came off assists.

“We can easily pass around these teams and I think that we just need to possess because we can’t just play the through balls,” she said. “This week we’ve learned to possess more around the team. It just prepares us better.”

Along with Ring scoring three goals, fellow senior Sage Doughtery scored twice and Bowbliss scored twice as well. All three of those seniors had an assist each.

Senior Olivia Ivey scored a goal 15 minutes into the match on a free kick from outside of the 18-yard box to make it a 3-0 spread. The other goal came from Alexis Robbins in the 46th minute on a penalty kick to make it 7-0.

Ivey had an assist on Bowbliss’ second score in the second half and Eva Reinhardt set up the finishing score from Ring as Horwath said that the match on Wednesday was an improvement passing the ball from the match at Harnett Central on Tuesday.

The final home regular season contest came with a laser-like focus from the team, Horwath said; one that has to stay for the next two weeks if the team wants to make a state title run.

“The bottom line is they came out tonight like it was a playoff game, and they need to,” he said. “The minute we stop playing like that, we’re done. I think everybody knows that.”

When looking at the second undefeated regular season for Union Pines in the last six years, Horwath said the Northwest Guilford and Carboro wins early in the season were matches that attest the perfect season.

Ring said that this puts the Vikings in good footing heading into a seeding process for the playoffs that is out of anyone’s control. Seeding for the playoffs will happen on Saturday and the first round will be played on Monday.

Patriots Down Hoke to Stay Perfect

After a quieter than normal first 40 minutes of the road contest at Hoke County, the Pinecrest girls soccer team ran off seven goals in the second half to close out the regular season with a 9-0 win on Wednesday.

The Patriots (14-0) used a hat trick from senior Lauren Landry in the second half to kickstart the offense. Sophomore Savannah Dunahay had two goals and an assist on one of Landry’s scores in the win.

The perfect regular season is the first since Pinecrest went 20-0-1 in the 2019 season. That year, the Patriots finished the season 26-1-1 and lost in the state championship to Heritage.

Hoke County scored a run in the bottom of the eighth inning to defeat the Pinecrest softball team in extra innings for a 5-4 win to end the season with a win on Wednesday night.

Pinecrest (1-11) scored runs in the top of the sixth and seventh innings to push the game into extra innings.

Senior Ashlee Ogburn had three hits in her final high school softball contest to lead Pinecrest and she scored two of the four runs in the loss to Hoke County (1-11).