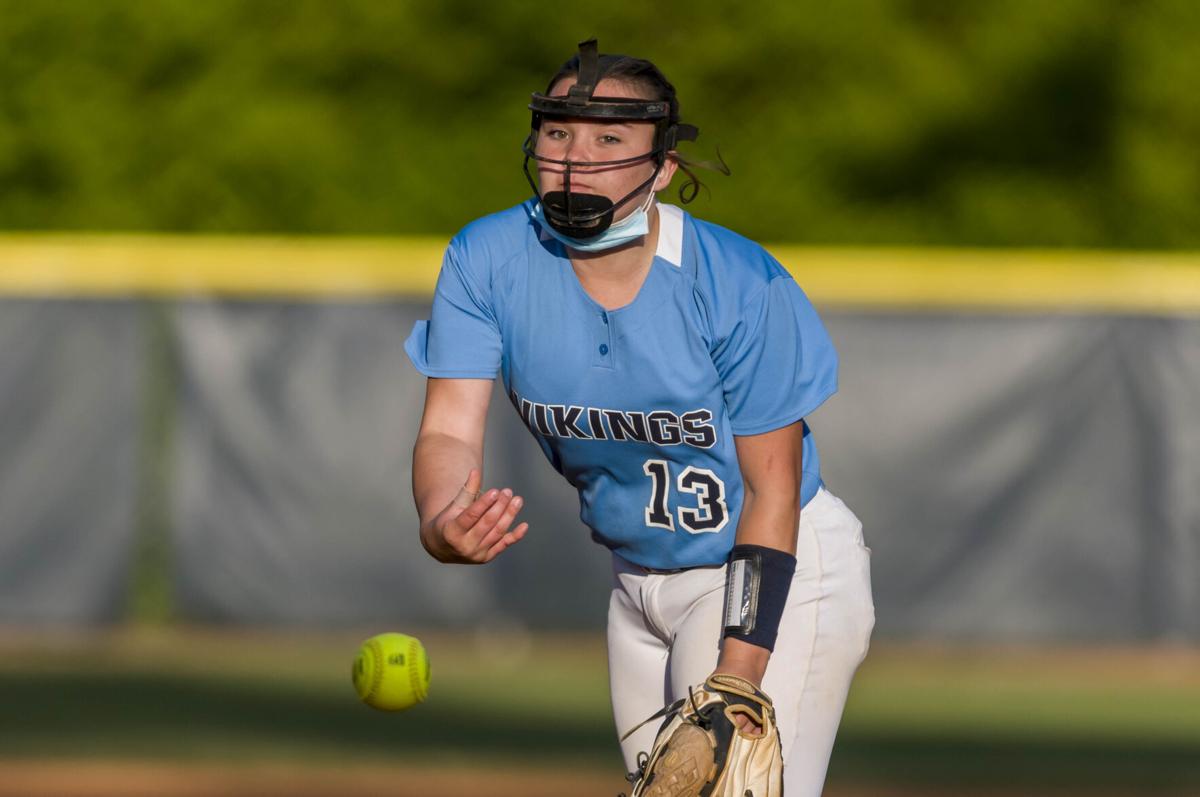 Union Pines Divonna Yonts (13) delivers a pitch during a nonconference game between Union Pines and North Moore Wednesday in Cameron. Yonts was a force in the circle and at the plate for the Vikings in the win. 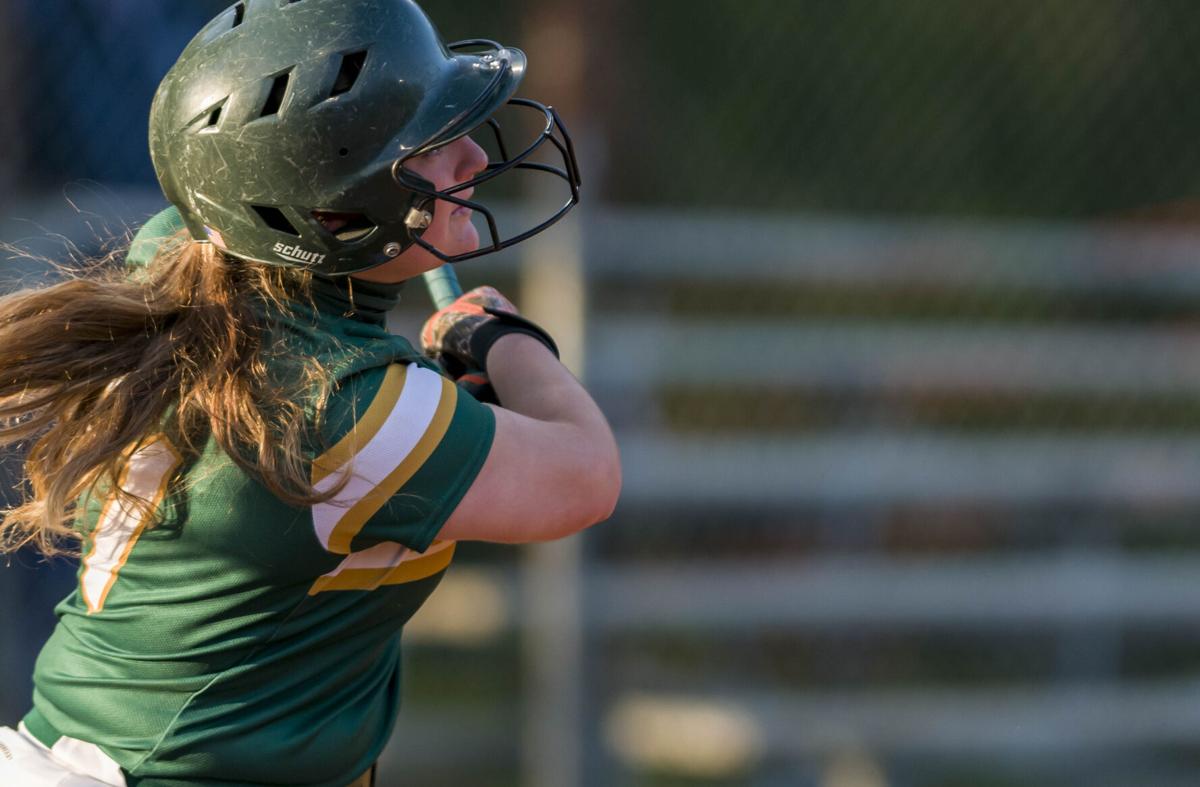 Nine of the 11 batters that the Union Pines softball team sent to the plate in Wednesday’s nonconference matchup at home against North Moore recorded a hit, including eight of the batters in the starting order.

That high offensive efficiency helped the Vikings claim a 10-2 win over the Mustangs as Union Pines prepares to hit the homestretch of the season.

“It’s just patience, making sure the ball was in their zone,” Union Pines coach Ley Crawford said of his team’s offensive showing. “The challenge is getting used to different pitchers, different speed and getting that timing down.”

Union Pines (3-4) scored every inning after hanging a zero on the scoreboard in the first inning.

North Moore (3-5) found confidence in the first inning after scoring a run in the top of the first inning when Kennedie Mercer crossed home after a fielding error by Union Pines that would’ve got the Vikings out of the jam unscathed.

“It boosted our confidence to let us know that we can play,” North Moore coach Jasmine Wray said. “We have had a bit of a struggle the last couple days, but this showed us that we’re still ball players on varsity. No matter how big their school is and how small ours is, we can play.”

The Vikings scored five runs in the bottom of the second inning to jump ahead for good.

Freshman pitcher Divanna Yonts drove in a pair of runs to start the rally. She then scored on a Corryn McCutchen double. Two more runs crossed in that inning on a North Moore error in the infield.

Yonts led Union Pines with two RBIs, and also struck out four in her four innings in the circle.

“She’s a freshman and has played JV all season. Due to some COVID quarantines, I had to move her up to pitch and she did very well,” Crawford said. “Being a freshman JV player to come into a varsity game, into a big stage. She settled in and handled it like a veteran.”

Crawford brought in sophomore Marissa Fuller to close out the final three innings, and she did so by striking out four and not allowing a hit.

“She’s pitched for me for two years now. She’s a great pitcher and I can depend on her,” Crawford said.

Mercer, who has been a leader in the infield this season for the Mustangs, showed why she is not a typical leadoff batter in the top of the third when she hit a solo homer to centerfield to make it a 5-2 ballgame.

“She’s maintained the position I thought that she would hold,” Wray said. “A lot of people’s leadoffs are slappers or bunters. She does slap on the side, but she hits the ball well from the right side.”

Mercer was the only Mustang player to reach base multiple times, and did so with her single in the first, home run in the third and reaching on an error in the fifth inning.

Junior Taylor Parker and Trissa Salazar and freshman Adelette Gutierrez each had two hits to lead Union Pines in the contest.

Gutierrez had an RBI groundout in the bottom of the fourth to make it an 8-2 Viking lead after Karma Morrison drove in a run with a triple earlier in the frame. Fuller helped her cause the next inning with an RBI groundout to make it 9-2, and a Lillian Jolly sac fly in the sixth brought the score out to its final.

In other county softball action, Pinecrest lost 13-2 at Scotland. Both teams were in a scoreless tie entering the third inning before the Scots rallied off 10 runs in the bottom of the frame.

After Union Pines and Southern Lee took a scoreless tie into halftime, the Vikings scored four goals in the second half at home to claim a 4-0 Tri-County Conference win on Wednesday.

Emma Ring had one goal and one assist. The other goal came from Lexi Robbins and Lillian Richard added an assist in the win.

The Vikings travel to Harnett Central on Friday.

Playing its third match in as many days, the Union Pines boys tennis team claimed an 8-1 win at home on Wednesday over Southern Lee.

In a rebound from Tuesday’s nonconference loss, the Vikings (6-1) swept the doubles matches and won in singles play in the top five matches.

Luke O’Donnell and Caleb Downing won the Nos. 1 and 2 singles matches, respectively, and then joined together for an 8-3 win in No. 1 doubles.

Brothers Jake and Davis Moubry won in Nos. 4 and 5 singles to remain perfect on the season, and then won in No. 2 doubles together, 8-2. Southern Lee took the No. 6 singles match.

The No. 3 doubles match saw Landon Patterson and Aaron Scodius team up for the 8-4 victory. The win was Patterson’s first.

The Vikings host Triton on Monday.

The Pinecrest girls soccer team matched its highest goal total of the season for a match, and did so against the same opponent as the Patriots claimed a 14-0 win over Scotland on the road on Wednesday.

Lauren Landry scored five goals for Pinecrest (12-0) in the win, including three in the first five goals of the match.

Blair Rice, Lauren Comstock and Savannah Dunahay each found the back of the net twice. Monica Etowski and Sami O’Reilly each had one goal.

Pinecrest plays at home against Jack Britt on Monday.