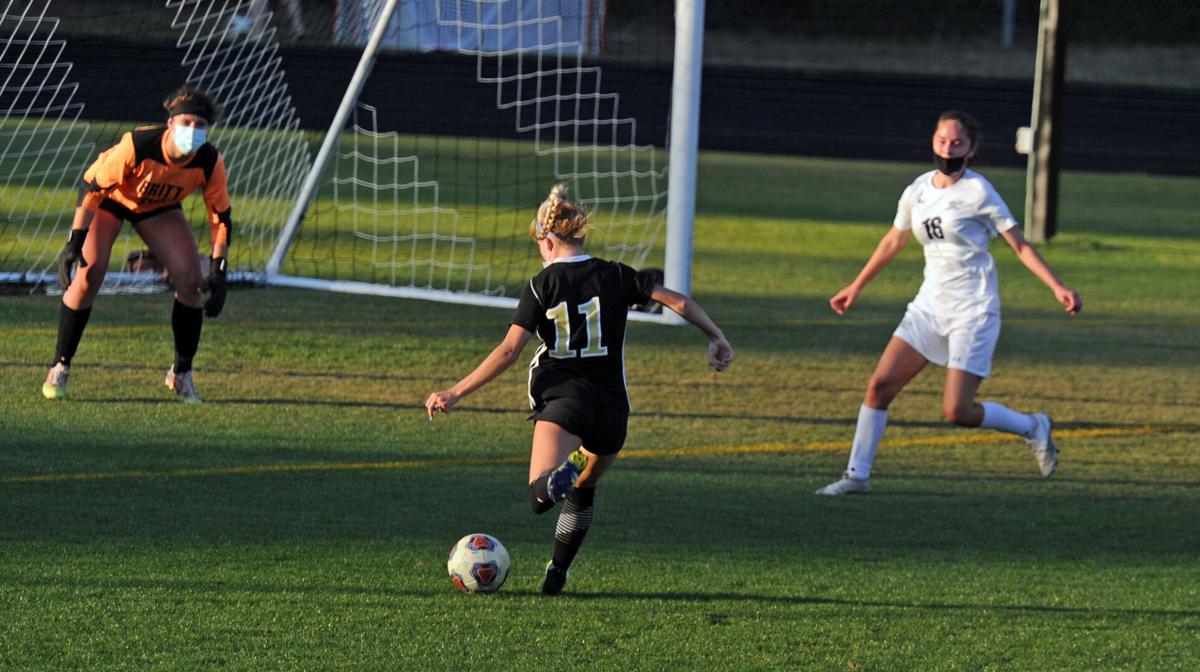 Pinecrest junior Blair Rice (11) takes a shot against Jack Britt for a first-half goal on Monday. 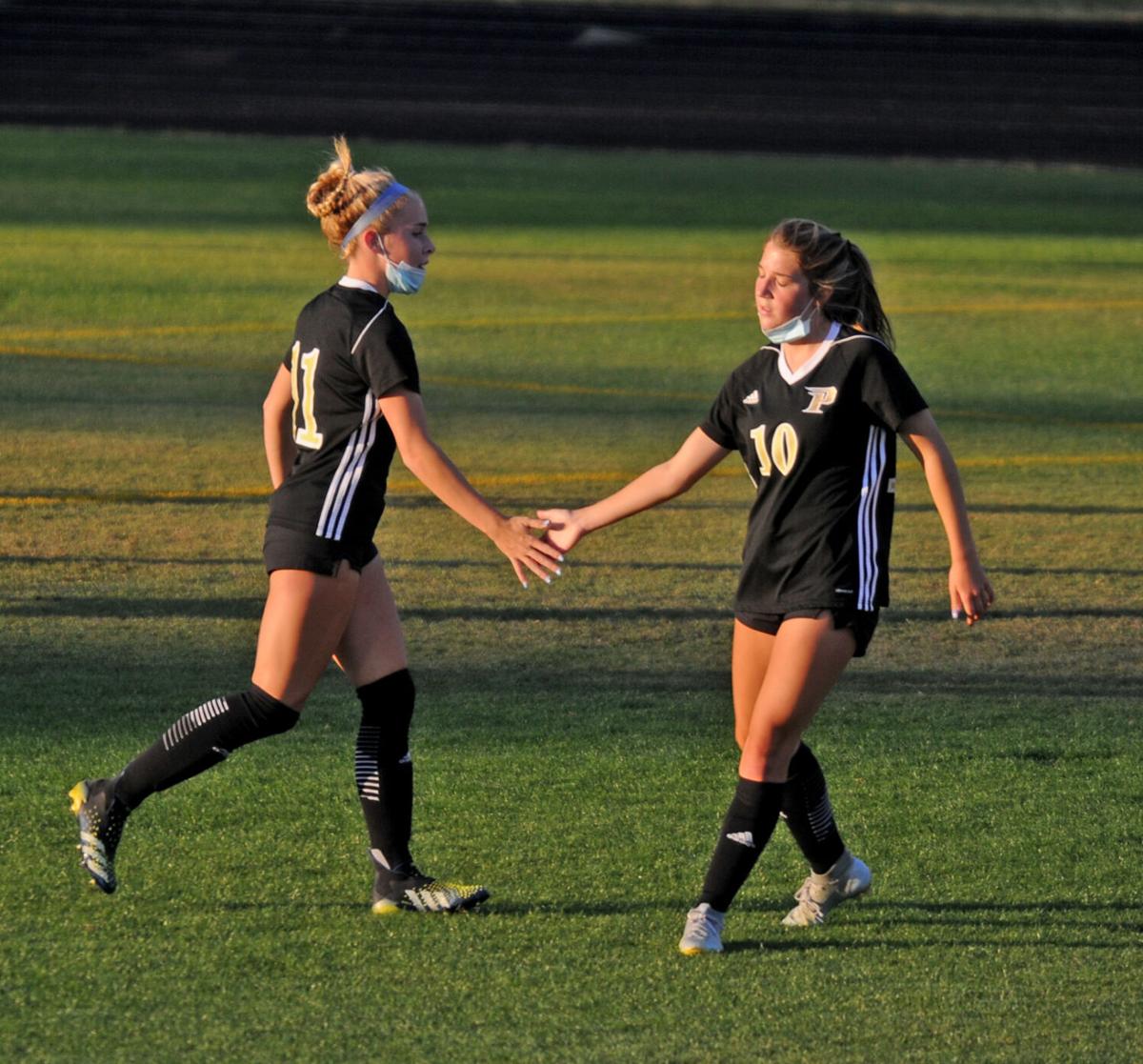 Pinecrest's Blair Rice, left, and Lauren Landry celebrate a goal for Rice in the first half of the 9-0 win over Jack Britt at home Monday. Both players have been major keys to the offense this season, and scored eight of the nine goals in the win. 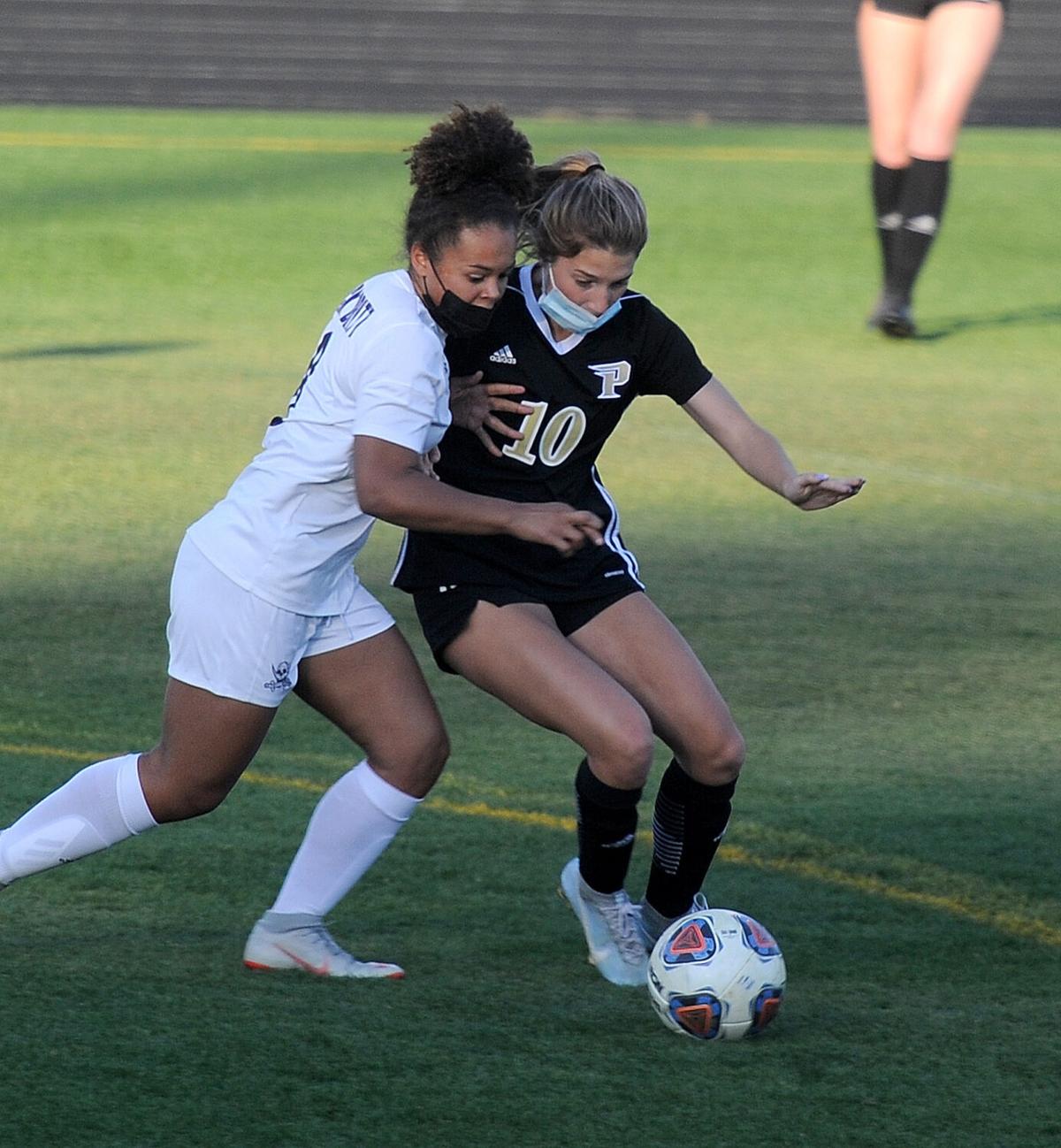 Pinecrest's Lauren Landry fends off a Jack Britt defender during the home conference match at home. Landry scored five goals in the win.

Many times, teams will look to get revenge after facing a team that beat them when a rematch happens later in the season.

Not often do teams have those same feelings like the Pinecrest girls soccer team had going up against Jack Britt, a team it beat last time out, at home on Monday night.

“We kind of wanted revenge for that. We were a little bit upset about the game last time,” junior Blair Rice said.

After the Bucs took the Patriots to the end of the match earlier this season as the only team to do so, six goals in 21 minutes of second-half action helped the Patriots to a 9-0 Sandhills Athletic Conference win and seal the conference title outright.

“The away game was tough. We only came out of it with a 4-0 win, and today we really passed around and moved around them. We had a lot more confidence coming into the game to just want to win,” senior Lauren Landry said. “They were super excited the last time, and we were like, ‘all right, we’re going to show you who we are.’ I think it was just preparing us for the playoffs too.”

Landry scored five goals in the match, and missed the prior contest with Jack Britt in Fayetteville earlier this month. The senior worked with sophomore midfielder Savannah Dunahay for five of the six goals in the second half.

Pinecrest (13-0) jumped out with three goals in the first six minutes of the second half after taking a 3-0 lead into halftime. Two of the goals came from Landry as she collected the hat trick with a goal in the 46th minute, and Dunahay took a perfectly-placed pass over the Jack Britt defense for a goal two minutes into the second half.

“We were just moving the ball around well. Savannah was up top and we were connecting well together,” Landry said. “I think we were just in the right place at the right time too.”

Rice took a pass from Landry in the 54th minute, beat out Jack Britt’s encroaching goalkeeper with her shot that was her third goal of the match. Rice posted two early goals in the first half.

Landry’s fifth goal came with 19 minutes to go off a pass from Camden Lewis into the box for a shot right in front of the goal to make it a 9-0 spread for the 12th mercy rule win of the season.

“I think we kind of just want to run teams into the ground, honestly,” Landry said. “I know it’s kind of mean, but when we’re prepping for the playoffs, we want to make sure we are going in as best as we can. That comes with scoring goals and working on our finishing.”

“It’s very encouraging for the team, especially with playoffs being next week. It helps us get more confidence,” Rice said. “Other than that, we’ve just kind of got used to it. That’s how it’s been since we’ve all been here.”

Landry and Rice were a part of the last Pinecrest team to play in the state playoffs, a run that went all the way to the state championship game that the Patriots lost in a penalty kick shootout to Heritage. After being underclassmen on that team, Landry and Rice now are seen as leaders for this year’s team.

Head coach Corey Rice has seen the pair develop over their careers and now into a role of seniority to lead the team on another deep playoff run that starts next week.

Pinecrest closes out the regular season at Hoke County on Wednesday.

Six errors in the field and seven hits at the plate hampered the Pinecrest softball team at home on Monday against Jack Britt in a 13-2 loss.

The Bucs scored a run in six of the seven innings in the win as Pinecrest’s two runs came in the bottom of the third inning on hits by underclassmen.

Freshman Maggie Drake and sophomore Frances Hanshew each drove in a run for the Patriots (1-10) in the loss. Drake had a pair of hits, as did senior Ashlee Ogburn. Other hits for Pinecrest came from Hanshew, Aniyah Jackson and Amy Webb.

Jack Britt pitcher Carlie Myrtle had 12 strikeouts in the win.

Pinecrest closes out the season at Hoke County on Wednesday.