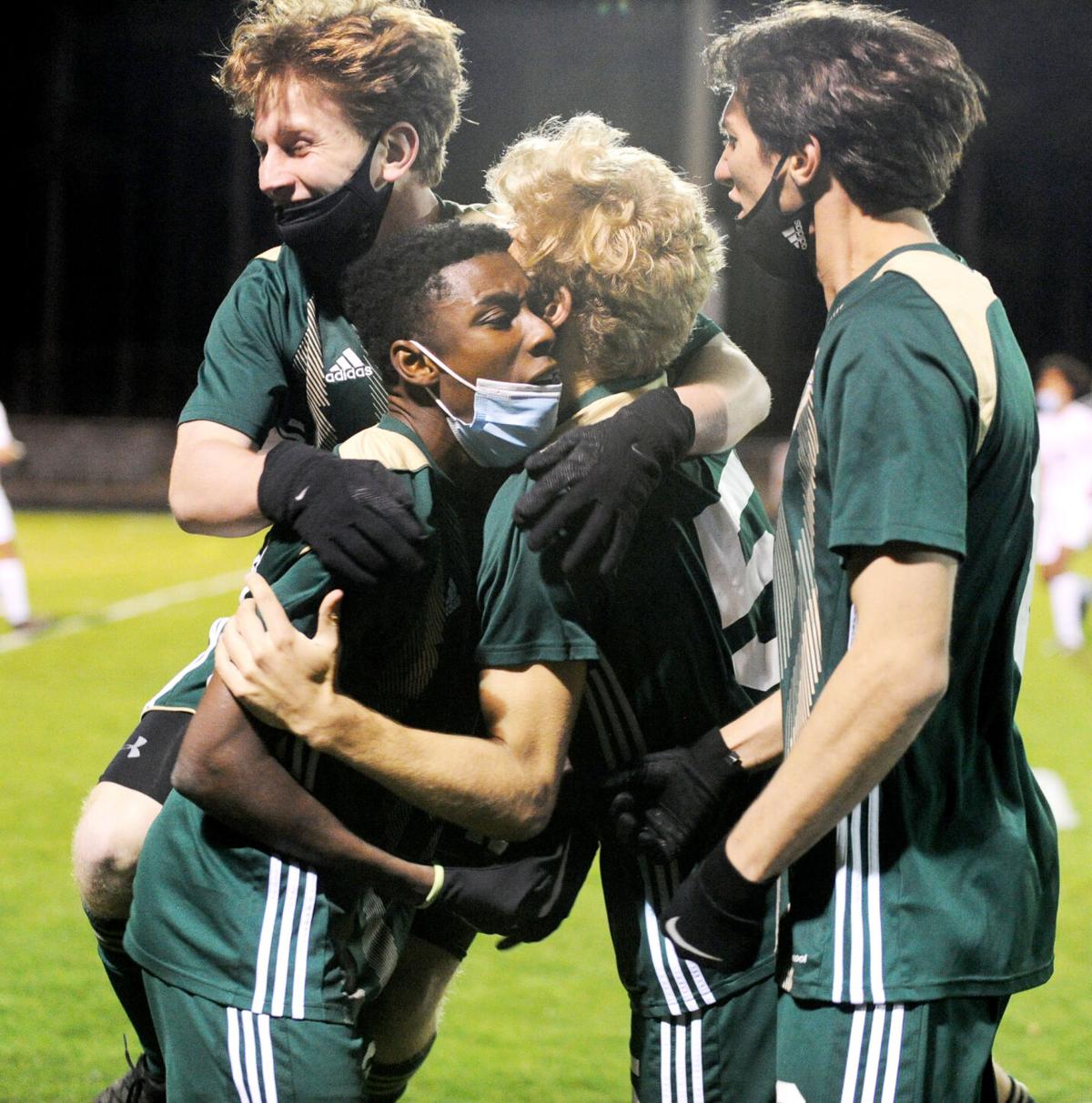 Pinecrest's Gerald Ofosu is embraced by his teammates after scoring Pinecrest's first goal against Jack Britt on Monday. 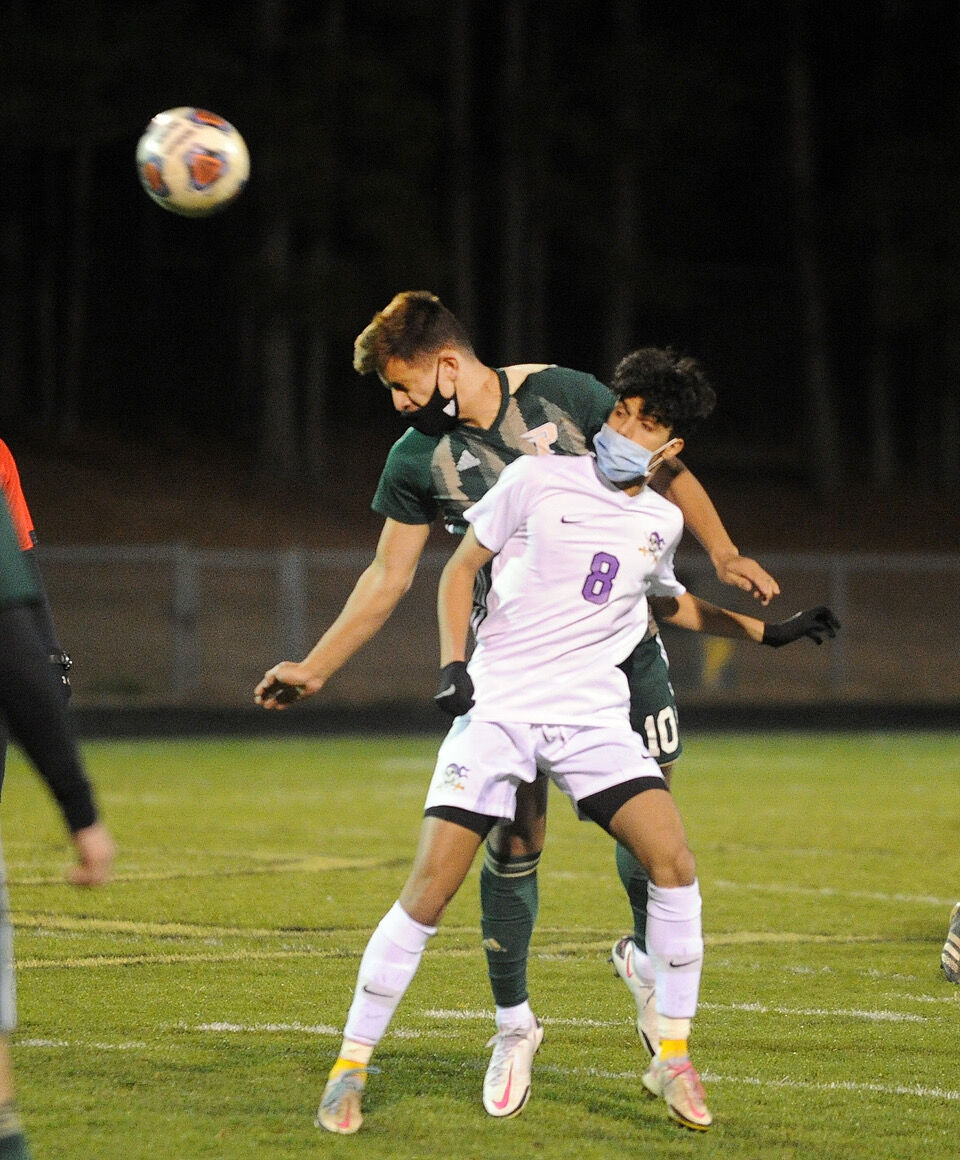 Pinecrest's Nick Vences (10) fights for a header against Jack Britt's Amin Hasan (8) during Monday's conference match. Pinecrest clinched the outright conference title and the top playoff seed out of the league with the win. 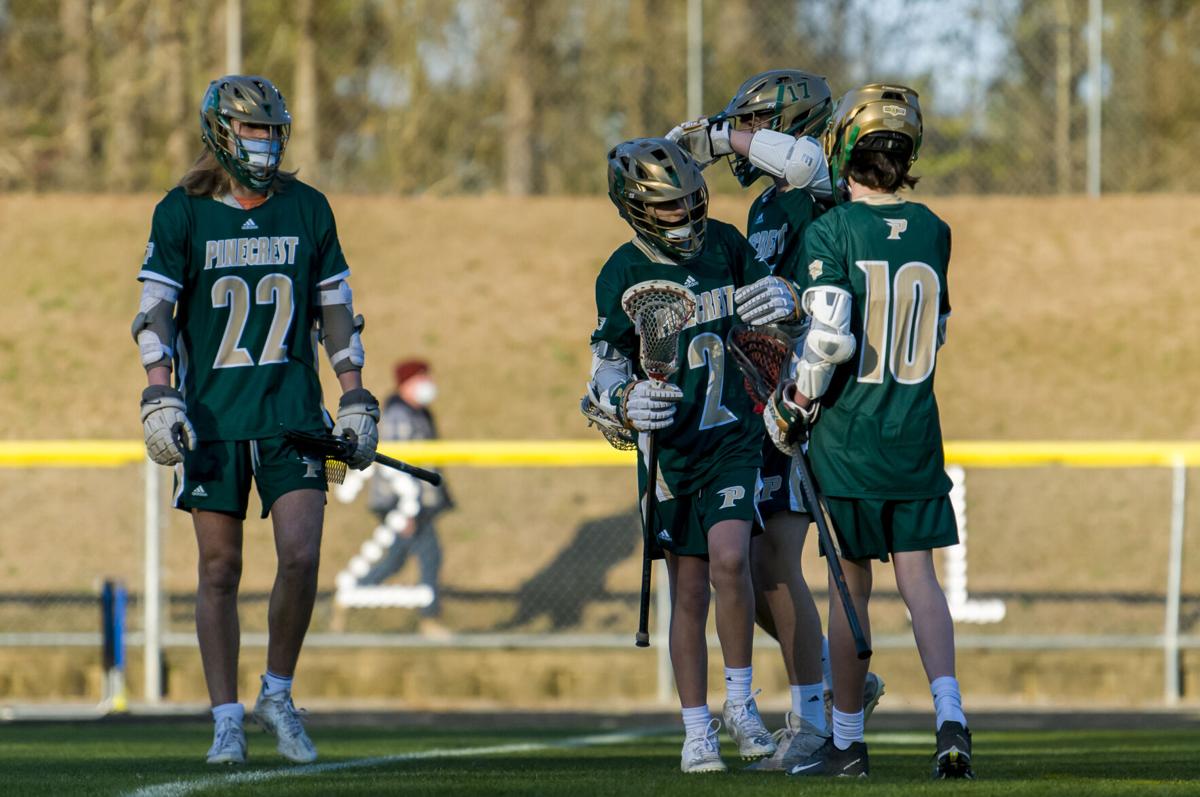 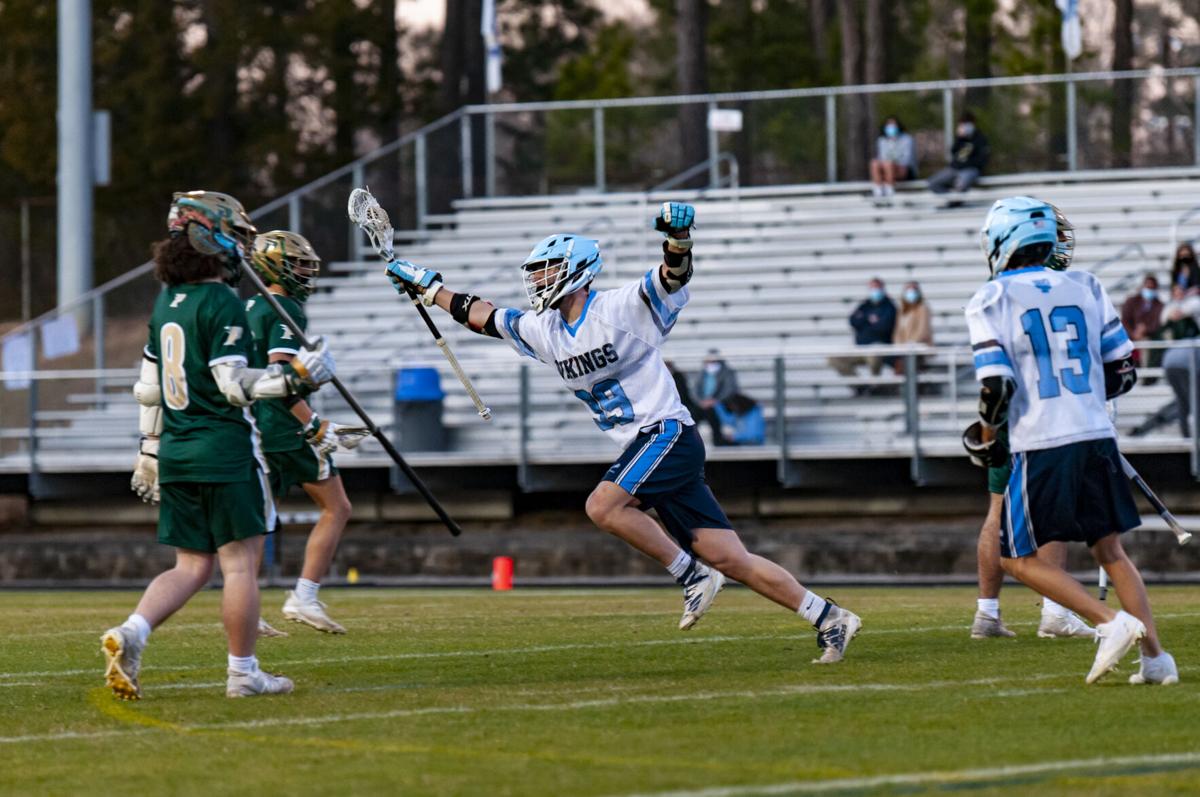 Union Pines Vikings Michael Moneymaker (99) celebrates his goal at home against Pinecrest on Monday. Moneymaker was one of six seniors honored before the match.

A win over Jack Britt was the goal of the Pinecrest boys soccer team on Monday night to not just win the Sandhills Athletic Conference title outright, but to give the Patriots a better showing than last time the two teams met in Fayetteville earlier this season.

“We knew we had to come out and prove that we were ready,” senior Nick Vences said. “Last time we knew we struggled a little bit so we knew we needed to come out strong and show them what we can do in the conference.”

The Patriots got both in a 4-0 victory at home over the Buccaneers, for a ninth shutout of the season.

Pinecrest closes out with road games at Hoke County and Richmond on Wednesday and Thursday. “One game at a time” is the approach that Vences and the rest of the Patriots are taking with the state playoffs starting next week.

Vences said he sees his role on the team that of doing whatever is needed to help the team succeed.

“It doesn’t matter if I score the most goals, have the most assists or help a lot defensively,” Vences said.

On Monday, that included scoring twice and then helping hold down the defensive back line with a sizable lead over the closing minutes.

Vences scored his first goal off a Cade McLaughlin pass from a free kick in the 15th minute of the game, and again on a penalty kick with 16 minutes left in the match.

Pinecrest’s (12-0) offense took more of an active approach against the pressure being put on by Jack Britt (9-3), Vences said, leading to some of the scoring runs. Pinecrest played the entire half up a man after a red card on a Jack Britt player late in the first half.

“We did a good job counter attacking them. Most of the time we had possession of the ball. We just tried to focus up and press as a team to make them make mistakes,” Vences said. “We had to assert dominance and give 100 percent. We wanted to make them want to get on the bus early.”

Junior forward Gerald Ofosu extended his Sandhills Athletic Conference goals lead by notching his 19th and 20th goals of the season against the Buccaneers. Ofosu’s 20 goals is two goals ahead of Lumberton’s Luis Izeta and five goals ahead of Vences in third.

“At the start of the season, we didn’t know he was going to be able to score 20-plus goals,” Vences said. “He’s always at the right place at the right time. He’s just a great player.”

Ofosu scored less than three minutes into the contest off an assist by Gray Smith, and his second goal came early in the second half off a pass from Binka Woody.

Over the next week, Vences said the Patriots are looking to continue the season-long goal of becoming the best version of themselves ahead of the postseason.

In what was the final game before the Union Pines boys lacrosse team will field a varsity team next season, the future of local lacrosse was put on display Monday.

The Pinecrest boys lacrosse team, playing with a majority of its younger players, claimed a 10-2 win. The showcase of the future also came with acknowledging the ones who have helped build the Vikings lacrosse program.

“There’s a brighter hope for the future now than there was two years ago,” Union Pines coach Jason Friedman said.

Union Pines’ six seniors — Jacob Hefner, Michael Moneymaker, Gavin Olvera, Wilson Raines, Jaquaries Donaldson and Juan Garcia — got a chance to play on their home field in a lacrosse match against their in-county foes for the first time. For those players, it was a long time coming.

Moneymaker and Olvera scored the two goals for the Vikings in the match.

“Once we settled down and got our feet underneath us, everyone settled down and we stopped making stupid passes,” Friedman said. “Once we figured out they put their helmets on the same way we do, and they are high school kids the same as we are, it just started to work out.”

For the Patriots, the outing was the first time the team has taken the field in a game since falling to Fuquay Varina last week.

“They really came together as a team and they showed sportsmanship and class,” Pinecrest coach Brad Thomson said. “For the growth of the sport in the county, we want them to do well. We want them to be successful.

“I’m hoping this turns into a rivalry and we play each other every season. From what I’ve heard they will come into our conference next year when they go varsity.”

Freshmen Gavin Laton and Thomas Mann eached scored twice for Pinecrest. Laton’s scores came in the first quarter as Pinecrest built up a 5-0 lead heading into the second quarter, and the regular in the varsity attack also set up several goals for the Patriots.

For Thomson that was the goal with a lot of younger players on the field for Pinecrest. Thomson kept some experienced players sprinkled in at all three levels to keep continuity with the team.

“I pretty much told the guys beforehand, ‘it’s not about you. You’re there as a support for them,’” Thomson said. “I wanted them to direct and coach them from the field where I can’t get to. I think they did a really good job with that.”

Pinecrest awaits for the playoff seeding on Saturday.