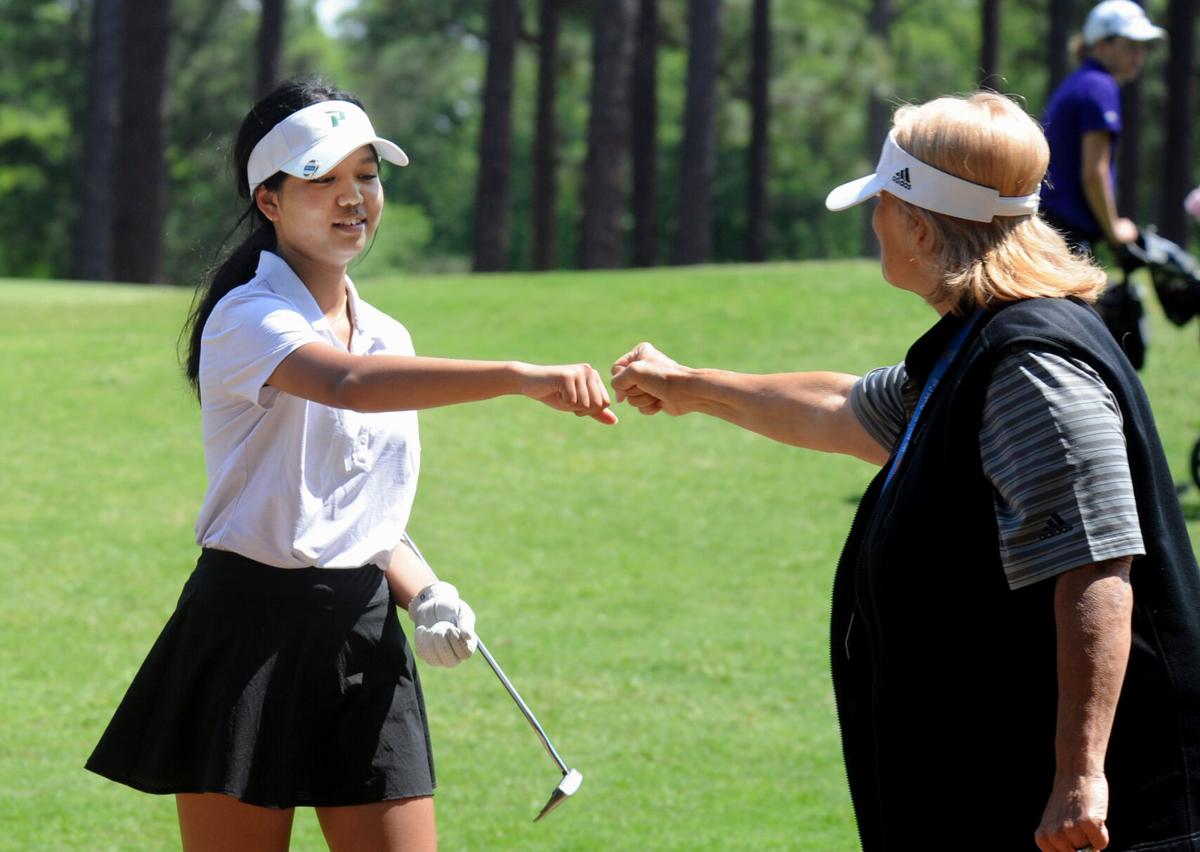 Pinecrest's BB Rujiranan competes in the NCHSAA state championship at Pinehurst No. 1 Tuesday. Her coach Lynne Beechler gives her a fist bump on the seventh hole. 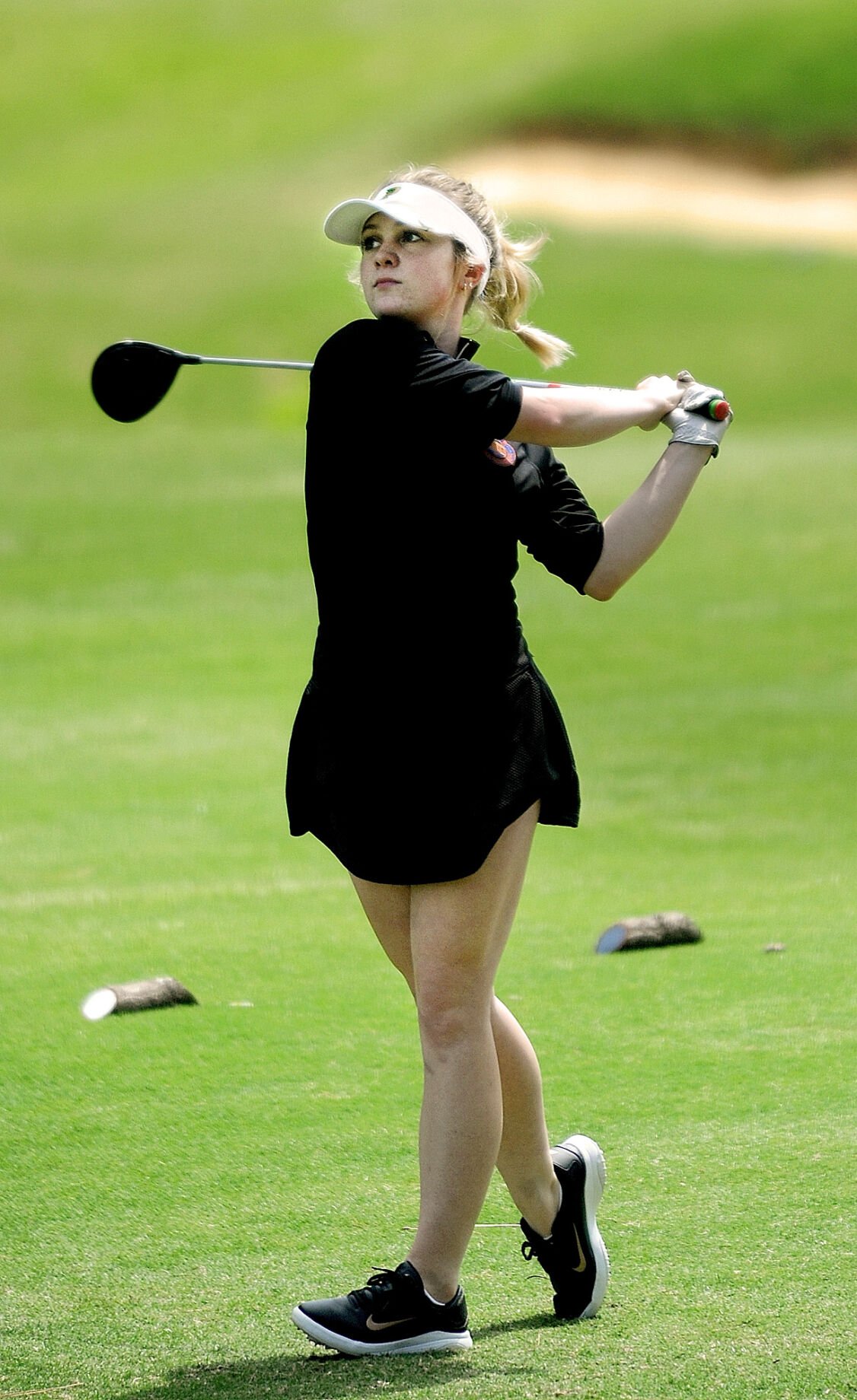 Pinecrest's Kitson O'Neal hits a tee shot in the NCHSAA state championship at Pinehurst No. 1 Tuesday. O'Neal rebounded late to finish with an 80 for the tournament.

When the tough times hit the pair on the course, the experience of playing other types of tournament golf helped them.

O’Neal competed last season on the 4A state title teams as a freshman, and her return visit to states saw her improve her best score by a stroke. She finished in a tie for 28th with a round of 80.

She showed that it’s not how you start, but how you finish as she closed with back-to-back birdies on No. 1.

“The course looked really nice. I struggled for the first nine, but then picked it up once I got to (hole Nos.) 15 and 16, and I started hitting my drives better,” O’Neal said. “(The two birdies) felt good because I definitely wasn’t in a good mood at first.”

After going out in 41, O’Neal finished with a 39 coming in as she went 1 under the final five holes.

Last year, O’Neal’s scores were 83 and 81 at the state championship.

“I like seeing me grow and starting to hit the drives further and my irons further. I’ve been definitely getting better and practicing more,” she said.

Over the weekend, O’Neal competed in a Peggy Kirk Bell tournament in the Myrtle Beach area, which she lost in a playoff in the 39-player field.

“Playing in those tournaments really makes a difference,” Pinecrest coach Lynne Beechler said. “When these kids play in individual tournaments, that gets their tournament mentality even stronger.”

Rujiranan, the Sandhills Athletic Conference player of the year, finished 38th with her round of 83. The freshman battled nerves early.

“I’ve got some good experience,” Rujiranan said. “I was really nervous. The first three holes, I was shaking so bad.”

She made the turn in 39 after a relatively quiet front nine with two bogeys and a double bogey. Coming back to the clubhouse she carded a 44 with four bogeys and two double bogeys.

“I tried to not overthink it. Just treat it like another tournament I’ve got to play,” she said. “I still feel like I need to go practice.”

The pair will be a part of the leadership nucleus of the team next season, and the season after that.

“We have a young team and we look to add some more players next year and come back even stronger,” Beechler said. “The two of them, they really contributed a lot to the team.”

Through their experience on Tuesday, O’Neal expects this to play a big part in helping get the team as a whole back to the state championship.

“We like seeing each other grow throughout the round and we’ve definitely seen that this year,” O’Neal said. “We definitely can build on how we play the courses and how we work together as a team more than anything.”

Raegan’s Macy Pate won the individual title with a round of 68. Raegan also won the team title with a combined score of 213.

The Union Pines varsity baseball team opened up Tri-County Conference play against the Harnett Central Trojan Tuesday night. The Vikings started off slow against the Trojans, but built momentum through the middle of the game. They held off the Trojans late to secure a 4-2 victory.

To start the game in the top of the first. Brandon Barefoot got the Trojans (0-2) hit into a fielder's choice to drive in the first run of the game to put the Trojans up, 1-0.

The Trojans answered back in the top of the sixth inning with an RBI Single to right by Barefoot to bring a Trojan runner in from third, to make it 4-2. But it wasn't enough as a late comeback fell apart in the seventh inning for the Trojans as the Vikings held on for the win.

The Vikings will travel to Harnett Central Friday for the second game of the two-game series between the teams.

(The story was contributed by Zack Ciboth, a student at Union Pines)

North Moore pitchers Robert Garner and Will Early combined for a combined three-inning perfect game and struck out all nine batters Gray Stone Day sent to the plate on Tuesday for a 19-0 win.

Garner pitched the first two innings and claimed six strikeouts, and Early struck out three batters in the bottom of the third.

Early led the Mustangs (5-0, 3-0 Yadkin Valley) at the plate with three hits and had an RBI. Justis Dorsett had two hits and an RBI. Other RBIs came from Clayton Allred, Justin Garner, Colin Dunlap and Ashton Monroe.

Despite out-hitting Purnell Swett, the Pinecrest baseball team was unable to push a run across home plate Tuesday in a Sandhills Athletic Conference matchup in Pembroke.

Two runs in the first for Purnell Swett led the Rams to a 2-0 win and hand the Patriots their first loss of the season.

Nick Dicarlo and Pierce Perrotta each had a pair of hits, while R.J. Sales, Cam Bunker, Jackson Kuhn and Aidan Nix each had a hit.

The teams play again Thursday at 7 p.m. at Pinecrest.