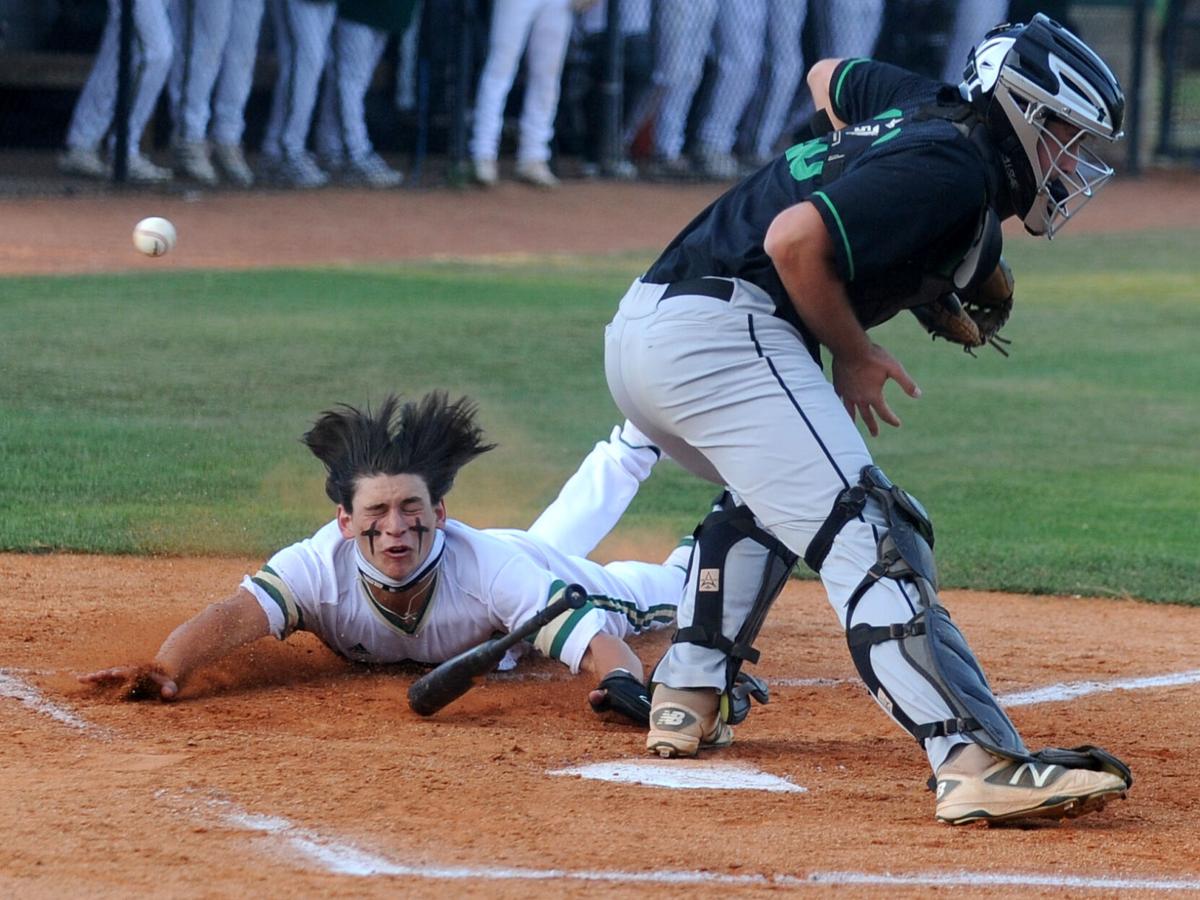 Pinecrest sophomore Colby Wallace dives into home plate against Myers Park at home Friday. Wallace had a grand slam in the fourth inning on the win. 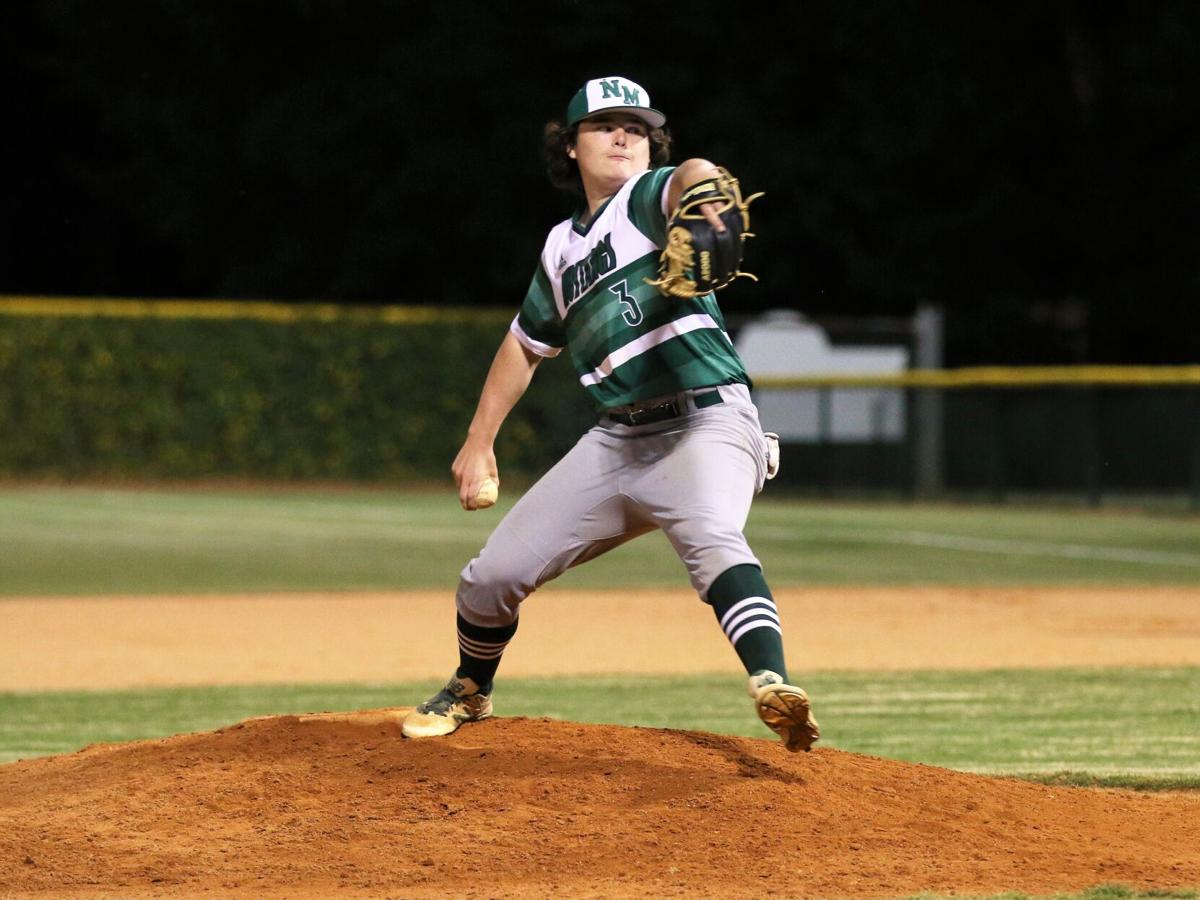 North Moore's Clayton Allred delivers to home against Western Harnett on Friday at home. Allred's pitching held the Eagles at bay to set up the walk-off win for the Mustangs. 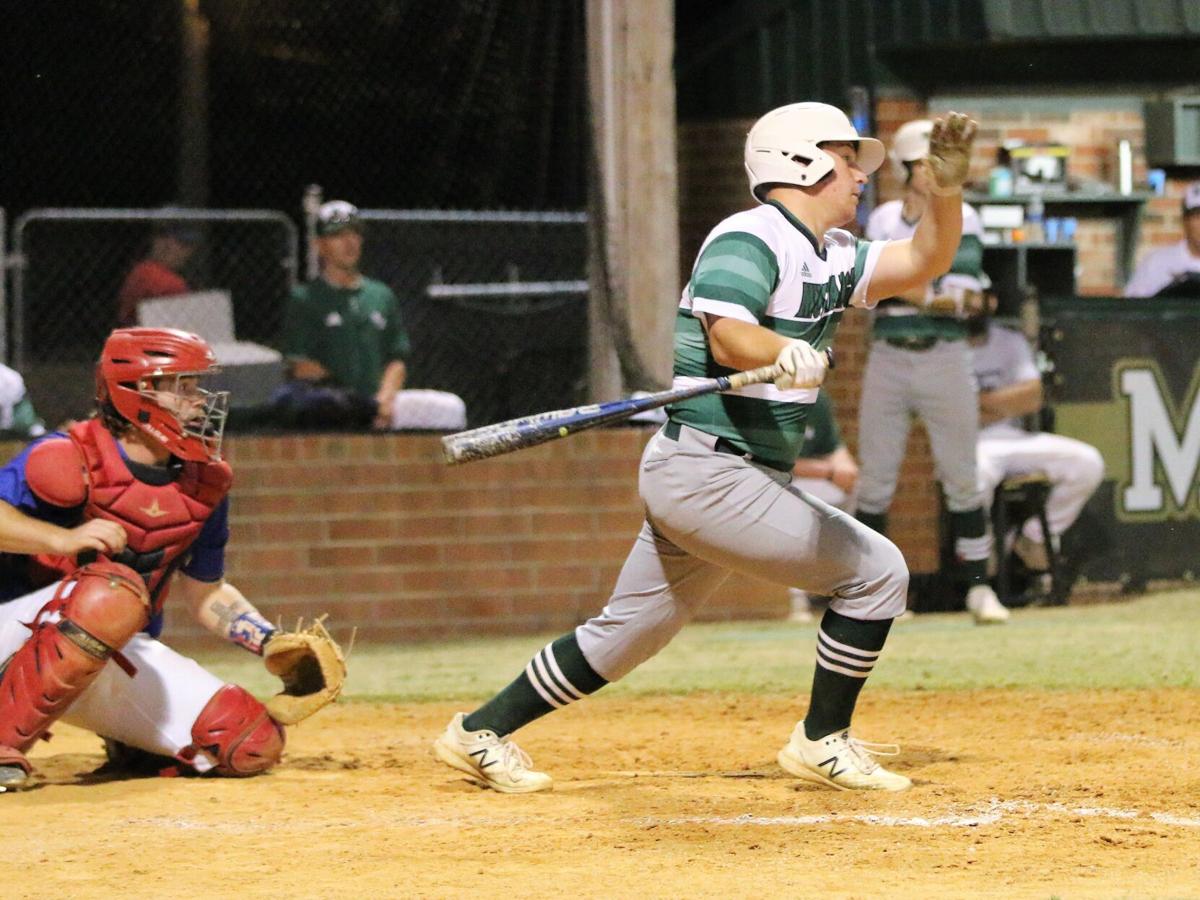 North Moore's Robert Garner rips a base hit against Western Harnett on Friday. Garner had a pair of hits, including the game-winning two-run single in the bottom of the fifth in the 10-9 win.

Robert Garner got the start on the mound for the North Moore baseball team on Friday, and things didn’t go as planned for his first start of the season.

Pulled from the mound midway through the top of the third inning where Western Harnett took early command of the nonconference matchup in Robbins, Garner kept his mind on the next play. With unwavering confidence  that remained until his final at-bat, the Mustang junior delivered the 10-9 win for the Mustangs.

“It took a lot of confidence. I was just thinking (to hit it) middle or back side when I got up to bat,” Garner said. “I saw a fat fastball right down the middle. That’s all I saw.”

With runners on second and third with one out in the bottom of the seventh inning, Garner ripped a base knock into shallow right center field to score both runners as the Mustangs (2-0) posted three runs in their final at-bat to come from behind.

Western Harnett (0-2) led by as many as six runs on two occasions in the game, but the young North Moore team with three seniors on the roster didn’t let the lead, and sloppy play early, deter them.

“The two-run home run was the only runs they produced. We made errors,” North Moore coach Billy Kennedy said. “We didn’t throw strikes, we were behind in almost all our counts up until probably the fifth inning. It comes to a point where we can’t talk anymore as coaches, we’ve just got to let them battle through adversity and get after it.”

The Eagles posted eight runs in the first three innings to lead 8-2. Six of those runs came in the top of the third inning when Garner was pulled. Errors and defensive mishaps started the inning and kept the Western Harnett bats coming to the plate.

Three run-scoring hits came during a four at-bat stretch for the Eagles, and Nate Jolley drove in two runs on a single to cap off the inning.

The bottom of the fourth saw North Moore chip away at a 9-3 lead with RBIs from Gabriel Swarms and Ty Allred. Allred then advanced to third base with steals and crossed home after an error attempting to pick him off by the Western Harnett catcher.

North Moore’s Clayton Allred shifted momentum with one swing in that same inning with a solo homer to straight away center field, making it a 9-7 score after four innings. He was later called on to pitch in relief in the fifth inning, and his pitching kept the Eagles at bay to close out the game, as he threw two perfect innings.

“We all just get pumped up as a team,” Garner said. “We all got confident in each other and then we came back.”

Both teams hung zeros on the scoreboard until the bottom of the seventh when Colin Dunlap scored a run with a double before Garner’s heroics, which came as a payoff for the work that Garner had put in for the last 14 months.

“He’s one of the hardest workers. Every time the doors have been open, he’s been here,” Kennedy said. “Just for him to come through, that’s huge for his confidence, especially at this point in the season. A hit like that, that can spring a kid like Robert.”

Junior Logan Ritter drove in two North Moore runs in the bottom of the first with a single. Western Harnett answered with a two-run home run from Seth McLamb in the second inning.

Garner, Dunlap, Ty Allred, Clayton Allred and Justis Dorsett each had a pair of hits in the win.

North Moore plays Tuesday at South Stanly, and Kennedy hopes that the win will provide confidence for his team.

“This gives us a great look for what we need to be seeing going into conference next week,” Kennedy said.

With a grand slam in the bottom of the fourth inning from sophomore Colby Wallace, the Pinecrest baseball team scored eight runs to take a commanding lead at home over Myers Park and cruise to a 9-3 win at home Friday.

The four RBIs from Wallace were a game-high as run-scoring hits also came from R.J. Sales, Nick Dicarlo, Cam Bunker and J.D. Scarborough.

Sales claimed the win on the mound pitching four scoreless innings, allowing three hits and striking out eight batters. Ryder Douglas came in for the final three innings and struck out six batters for Pinecrest (2-0).

The Patriots play at Richmond on Tuesday.

Ten runs scored in the bottom of the fifth inning helped the Union Pines baseball team finish off Montgomery Central in a run-rule victory at home on Friday.

The Vikings hit three long balls in the 17-6 win, and collected 15 hits against the Timberwolves.

Purvis pitched three innings and allowed six runs, two of which were earned, while striking out three batters. Jonathan Foster came on in the fourth inning and struck out three Montgomery Central batters.

Finley Spicer and Ethan McKay each had a pair of hits for the Vikings.

Union Pines plays at home against South Johnston on Tuesday.

Vikings Open 3-0 on the Mats

The Union Pines wrestling team started the 2021 season with a trio of wins this week. The Vikings hosted a dual meet with Southern Lee and Triton, and then they traveled to Cardinal Gibbons on Thursday to claim a 53-23 win.

In the 66-12 win over Southern Lee, seven wins came by forfeit for the Vikings.

The 71-12 win over Triton included seven wins by forfeit for Union Pines. Colton Collins, Sam Bullard, Aaron Faison and Perkins won by fall in the match, and Aiden McCafferty won by tech fall.

In the road trip to Raleigh, Union Pines controlled the middle and upper weight classes to secure the win.

Faison won by tech fall at 160 pounds as Union Pines won the next five matches by fall, and earned a forfeit win at 106 pounds.

Mascolino, McCafferty, Pettine, Collins and Bullard won by pin over the Crusaders.

The Union Pines boys tennis team won the Tri-County Conference title with a win by forfeit on Thursday over Trtion at home.

The mark is the 41st time has won a conference championship in 55 seasons the school has fielded a boys tennis team.

The Vikings finished the season 7-1, with no losses in conference play.

The Pinecrest wrestling team started the season with four wins in the first week of the season.

The first pair of wins came against Currituck and Clayton on Thursday.

The Patriots hit the road on Friday and took on Surry Central and Elkin.

Against Surry Central, Pinecrest came away with a 45-30 win. Among the Patriot victors in the match were Gavin Millard, Jayden Dobeck and Matt Rowland. Pinecrest then defeated Elkin 71-6.