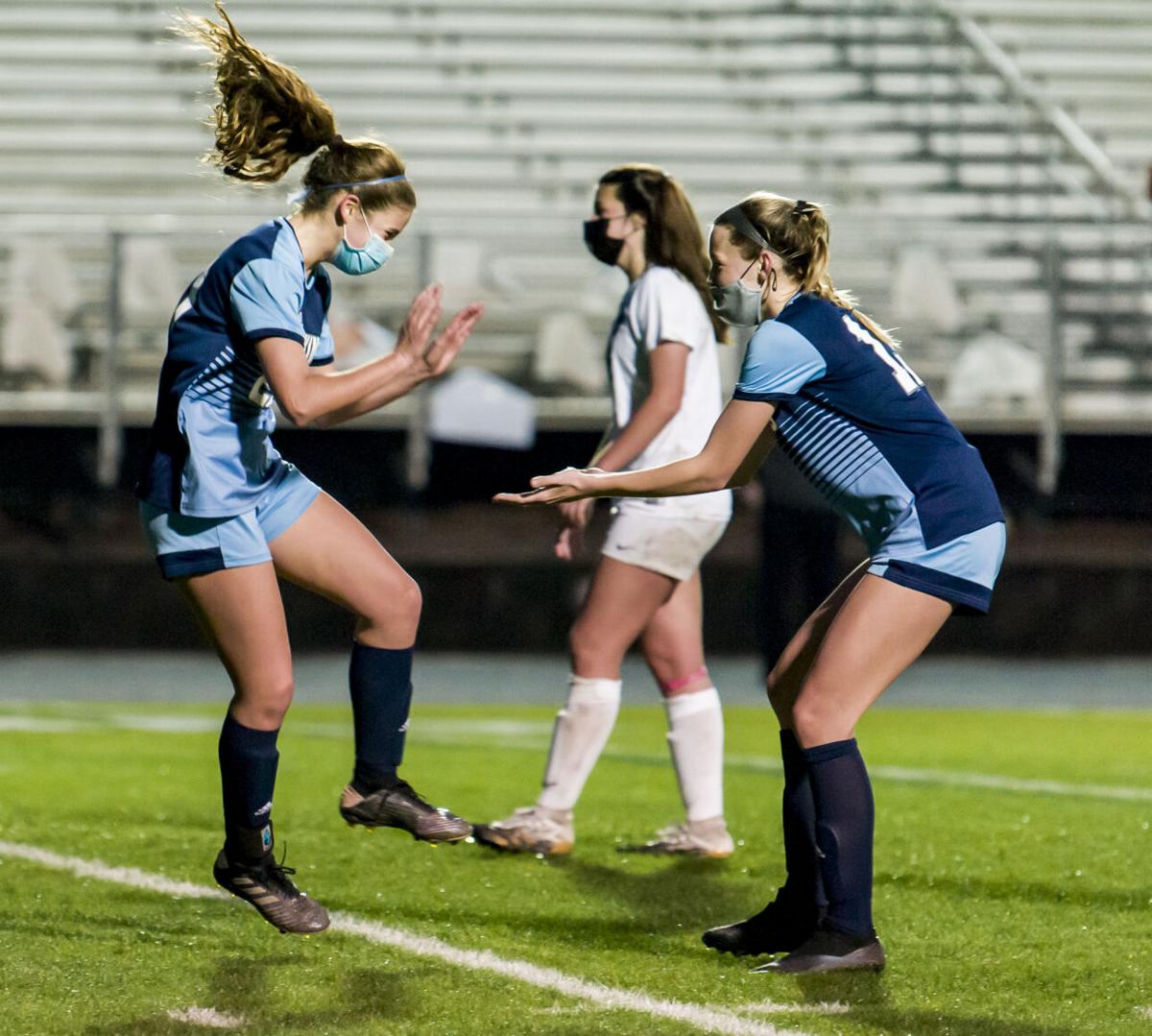 Union Pines midfielder Eve Reinhardt (20) celebrates her goal with Emily Bowbliss (13) in nonconference action between the Union Pines and the Carrboro on Wednesday at home. 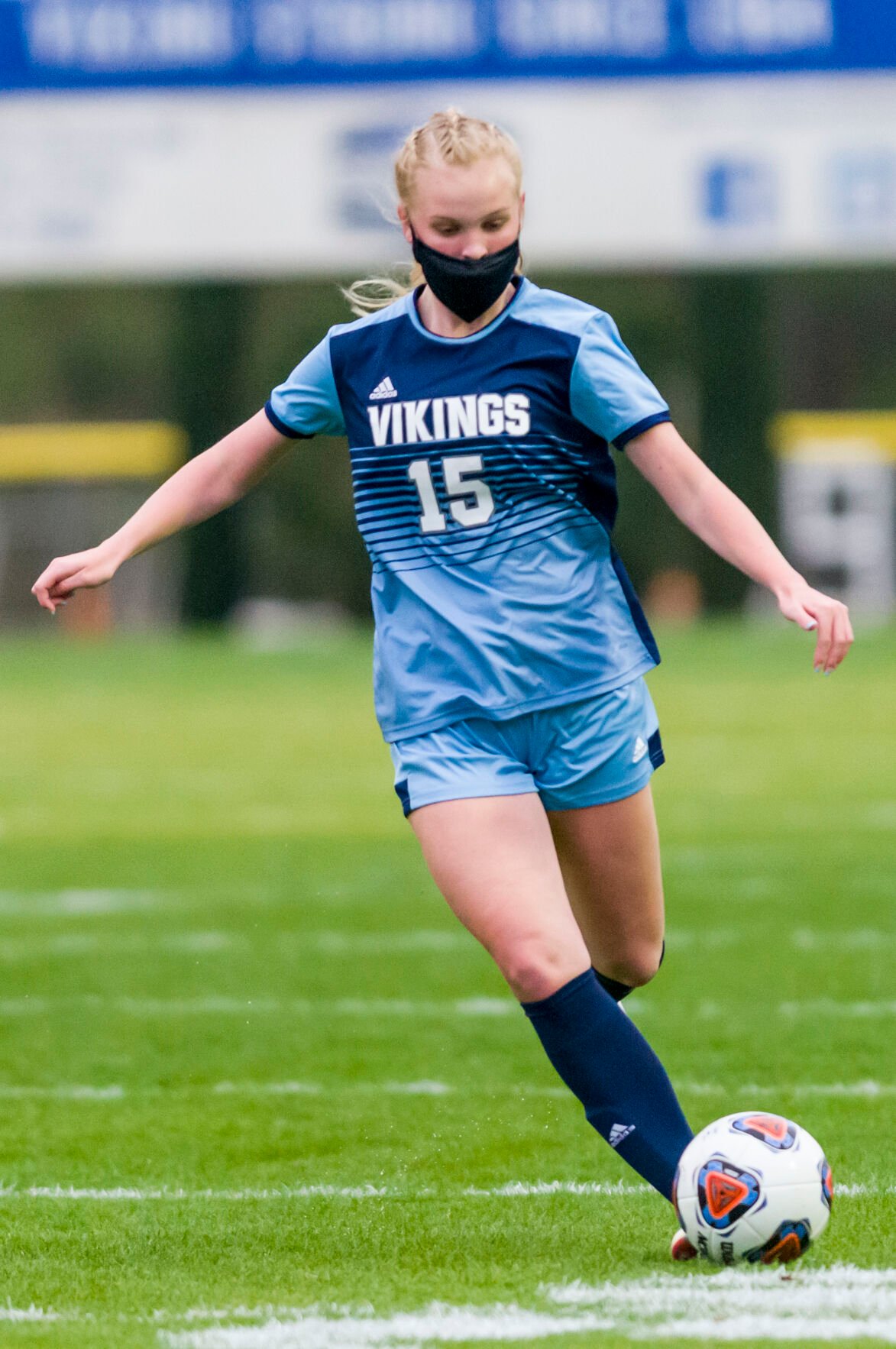 Turning up the pressure midway through the second half of Wednesday’s nonconference soccer match, there was a feeling it was only a matter of time before the Union Pines girls soccer team would find the back of the net to break a tie with Carrboro at home.

With less than 15 minutes left, three goals came quickly for the Vikings to help seal a 4-1 victory over the defending 2A state champions.

“Being able to put four goals up on this team when their keeper and their defender are on the top 20 to watch, it’s an accomplishment,” Union Pines coach James Horwath said. “We did very well in this game. What impressed me the most, beyond goals and beyond our scoreline, was the amount of quality shots they had. They didn’t have a lot of quality shots.”

After having last season pulled out from under the team due to COVID-19, the Vikings’ (2-0) return to their home field came with mixed emotions.

“It feels amazing and I missed it a lot,” senior Olivia Ivey said. ”I was very sad to see it get cut off last year because I thought we were going to be very good.”

With games scheduled against Carrboro, and upcoming matches with West Johnston and Northwest Guilford, the aim for the program was to prepare for the Tri-County Conference slate and carry that over into the state playoffs.

Ivey broke open the scoring in the match on Wednesday when she scored off a pass into the 18-yard box from Eva Reinhardt in the 15th minute of the game.

“I saw us come together and actually fight because we knew coming into this it was a serious game,” Ivey said. “We had that momentum going from the start and it worked.”

Carrboro’s scoring chances were limited by the Vikings, with the lone goal from the Jaguars coming on a free kick late in the first half from Navia Mosley.

Over that last 20 minutes of the match with the score tied at 1-1, scoring chances became closer and closer for the Vikings. Then a Gianna Silvestri free kick from 30 yards out snuck past the outstretched hands of Carrboro goalkeeper Lucy McDaniels in the top left corner of the goal to break the tie.

“We just had to realize how bad we wanted it. I think we knew going into the game we wanted to win. Once they scored, it caught us off guard,” Ivey said. “Once we started scoring toward the end, I was just thinking we had to slow it down, get it and boot it toward the end,”

The floodgates opened from there as Reinhardt scored on a shot from the left side of the goal two minutes after Silvestri’s goal with 11 minutes left in the game.

The Vikings’ leading goal scorer in recent history, senior Emily Bowbliss, was scoreless entering the final minute, but the UNC Wilmington recruit would not be denied.

After McDaniels collected a ball in front of the goal and stepped back to clear it down field, Bowbliss went in a full sprint to deflect the pass, gathered it inside of the six-yard box and posted the final goal of the match with 40 seconds left.

“The fourth goal was probably one of frustration,” Horwath said. “She did what I told her to do. We press until the end of the game. She high pressed her and that’s what we do.”

Bowbliss added an assist as well in the match and Sage Dougherty also assisted on a goal.

Union Pines plays at home against West Johnston on Monday.

Pinecrest Lacrosses Falls in Second Round

Fuquay-Varina was an opponent that had the Pinecrest boys lacrosse team’s number this season.

In the third meeting between the teams this season, Fuquay-Varina defeated the Patriots once again by a two-goal spread to advance to the third round of the 4A state playoffs on Wednesday with a 12-10 win.

Fuquay-Varina scored four goals in the opening quarter and led 4-1 entering the second quarter. From there, the Patriots played catch up the rest of the game.

Patriots Down Richmond in Home Opener

Junior Keaton Clark scored four goals to lead the Pinecrest girls soccer team to a 9-0 win over Richmond at home on Wednesday.

Clark scored a hat trick in the first 22 minutes of the match as goals came early and often for the Patriots. Junior Blair Rice scored a goal and assisted on a pair of other goals.

Abigail Kennedy scored a goal and passed for another goal. Other goal scorers for the Patriots (2-0) were Anika Gulovich, Lauren Landry and Savannah Dunahay.

The Pinecrest softball team had two hits and committed eight errors in its home opener against Richmond on Wednesday that ended with an 11-1 defeat in five innings.

Emily Jones and Frances Hanshew had the hits for Pinecrest (0-1). Jones pitched the entire contest and struck out four batters.