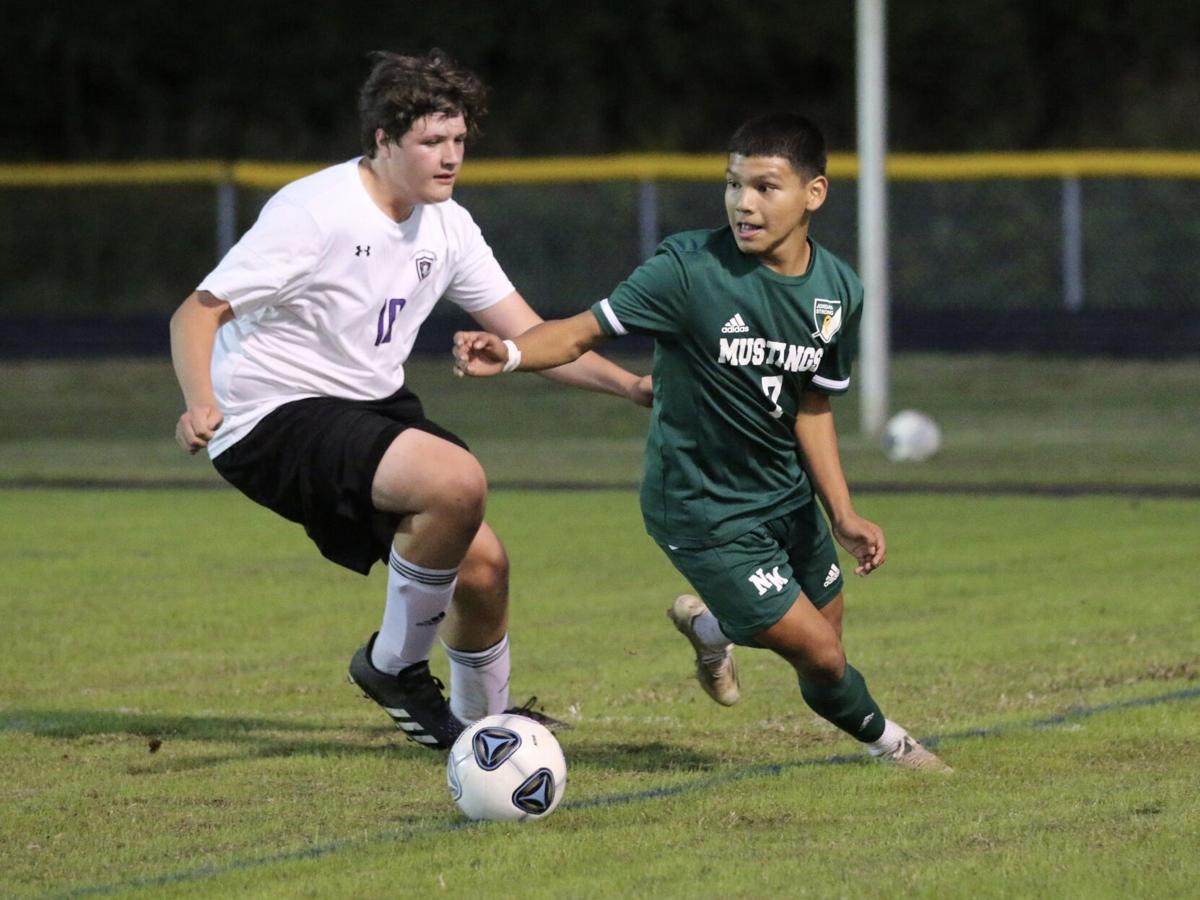 North Moore sophomore Ricky Bentancourt (7) dribbles around a Chatham Charter defender at home Monday in the first round of the state playoffs. Bentancourt scored three goals in the 7-0 win. 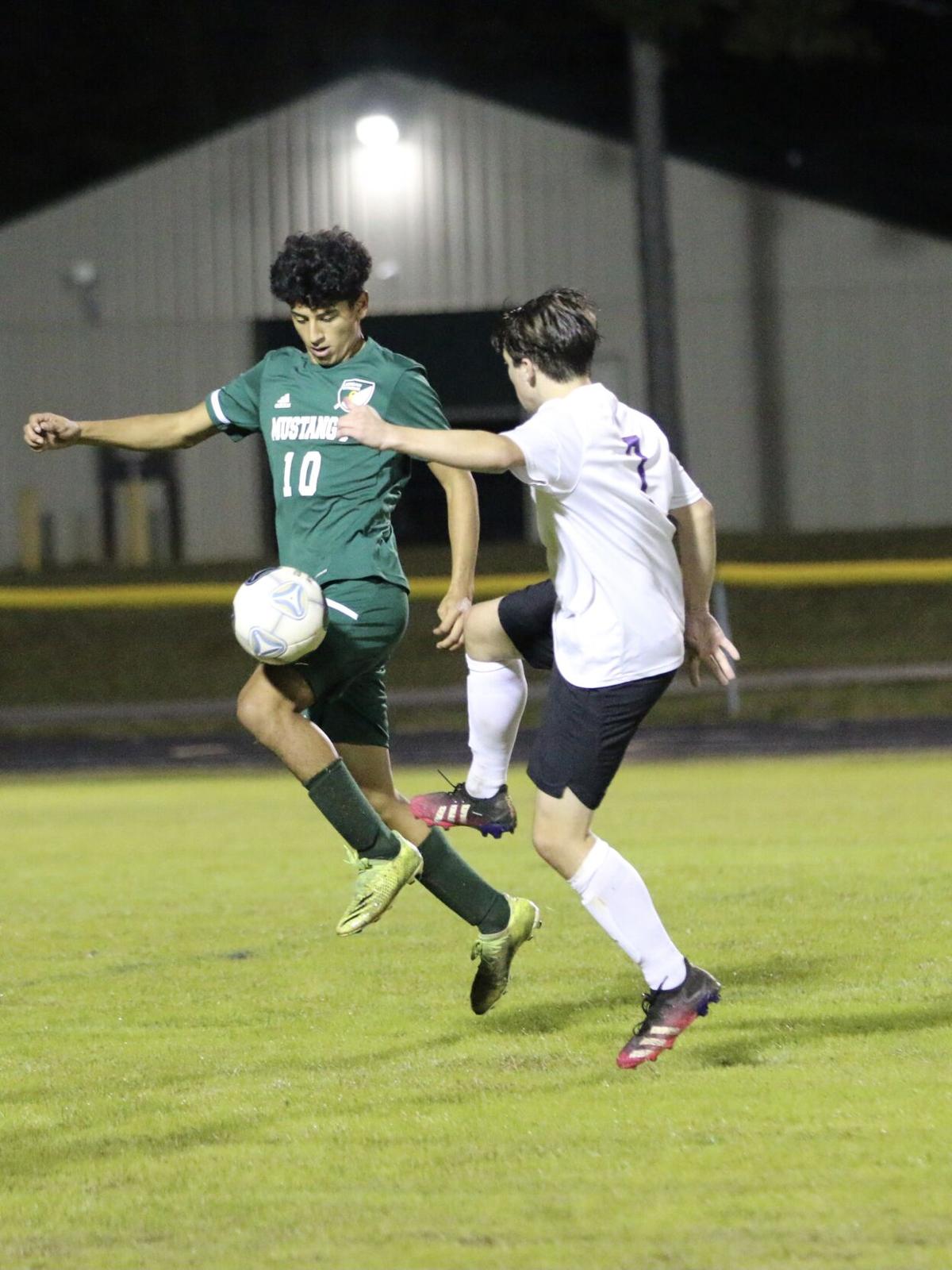 Lightning quick with the ball in his possession, North Moore sophomore Ricky Bentancourt has a way of making goal-scoring look easy, but his coach wanted him to try to variate his offensive attacks in the first round of the N.C. High School Athletic Association 1A state playoffs Monday.

“I told him, ‘Today is the day you need to start thinking about shooting whether it is with your right or your left.’ I think with the first goal he shot it with his left and scored,” North Moore coach Luis Peralta said. “Obviously Ricky is one of the most talented players I have as far as ball skills.”

Against Chatham Charter at home, the Mustangs’ offense got off to a slow start, but Bentancourt provided the initial lift needed for a 7-0 win.

“I just thought that the defense was weak and I could beat them with my speed,” Bentancourt said. “I started talking more with them and everything just clicked.”

North Moore hosts Neuse Charter Thursday in the second round.

His left-footed strike after stealing away a muffed goal kick from the Knights (0-18) put the Mustangs (8-5-2) on the board with seven minutes to go in the first half.

Locked in a scoreless tie for the first 33 minutes of the match, North Moore’ seven goals came at a higher rate as the team became more vocal.

“We had to start talking more and communicating more,” Bentancourt said. “

After building up a 5-0 lead with 12 minutes to go, Bentancourt added a pair of goals over the final seven minutes of the match for the hat trick. His second goal came off a pass from Daniel Sales.

On top of making sure to communicate better to help out the passing, North Moore also took into account the value of playoff games and needing to play with a sense of urgency.

“It was like they were still thinking that it wasn’t a playoff game yet. I’m not sure,” Peralta said. “I think Chatham Charter played really well in the first half and that complicated things.”

While only a sophomore, Bentancourt said last year’s first-round playoff loss was a lesson learned that the entire team didn’t want to have happen again.

Senior Fernando Martinez scored the second goal of the first half for the Mustangs on a roller that zipped past the Chatham Charter goalkeeper. Three North Moore goals came in the first 18 minutes of the second half from freshman Gabriel Solache, senior Cesar Becerril Gonzalez and senior Roque Velazquez Avila.

Pinecrest Into Second Round; UP Loses To Jacksonville

Behind a 4-1 win over Durham Riverside at home Monday, the Pinecrest boys soccer team advanced to the second round of the 4A state playoffs.

The Patriots will host Holly Springs Thursday at 6 p.m. The winner of that matchup gets the winner of Cardinal Gibbons and Wake Forest.

The Union Pines boys soccer team lost 6-0 to Jacksonville in the first round of the 3A state playoffs.

The Union Pines girls tennis team lost in the third round of the 3A dual team state championship at Terry Sanford Monday, 6-0, after the match was sealed by six wins for the Bulldogs in singles play.

The Vikings finished the season with a 13-3 record.