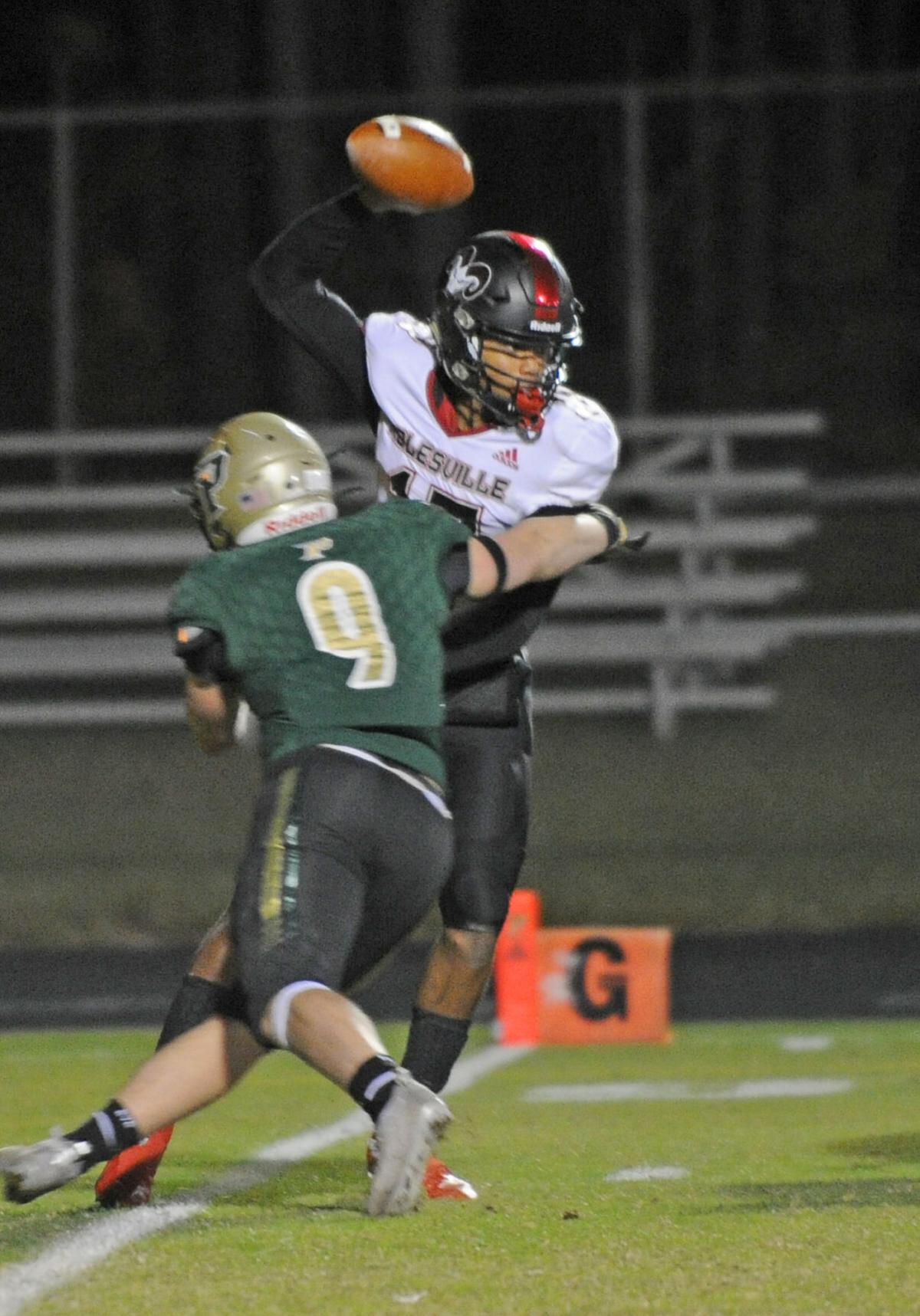 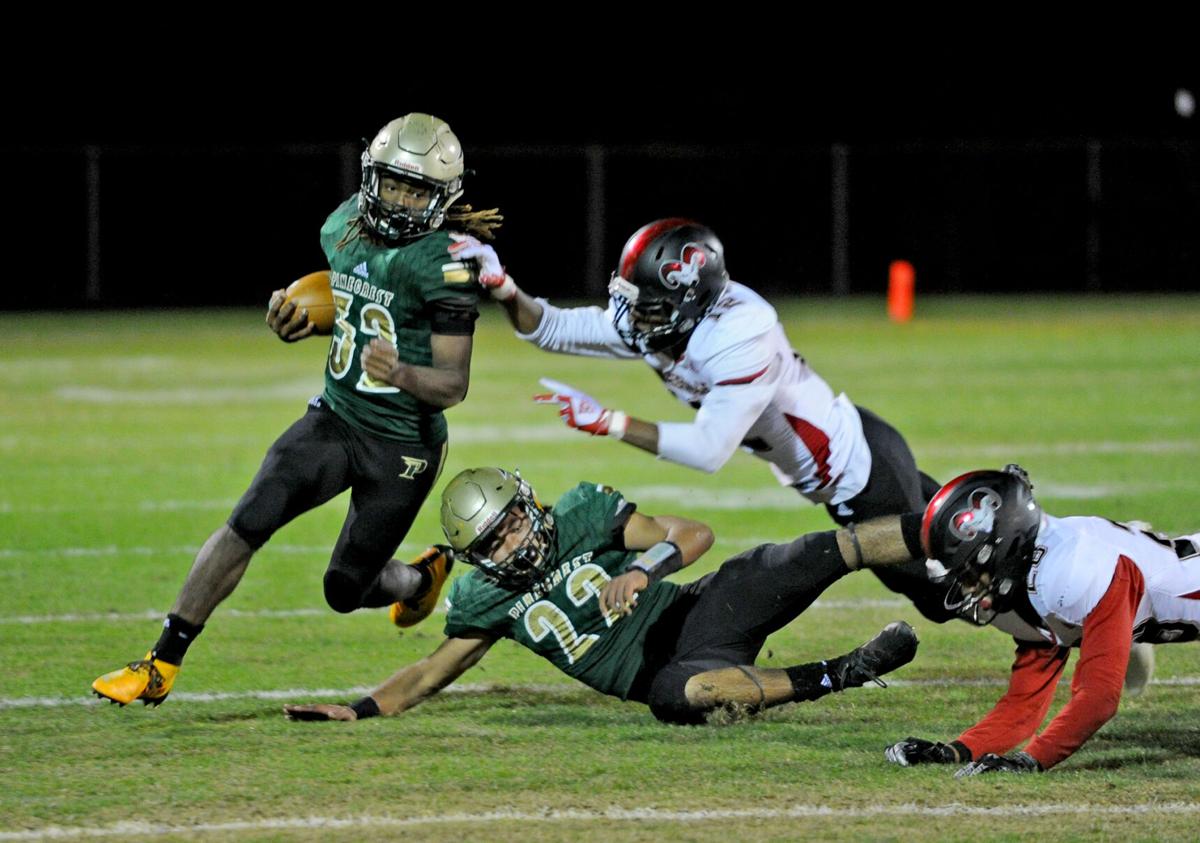 Pinecrest junior Nahjiir Seagraves (32) looks for the edge against Rolesville's defense at home in the first round of the 4A state playoffs.

While the matchup was the same opponent as the one to open the season for the Pinecrest football team, the second half of the rematch Friday showed a Rolesville team battle tested and developed from the Week 1 version the Patriots claimed a win over.

A 56-32 loss for Pinecrest came from the second meeting between the teams as the Rams claimed the upset in the first round of the N.C. High School Athletic Association 4A state playoffs Friday night in Southern Pines.

“The guys played their hearts out. We let a few things slide. We let a few things get the best of us in terms of a few plays,” Pinecrest coach Bob Curtin said. “Sometimes there’s so much adversity a kid at 17 can take on, and we, the adults, have to step in and help them out.”

Climbing back into the game at halftime, and looking to build momentum early in the third quarter, two plays that have typically gone Pinecrest’s way this season made a difference while the Patriots were attempting to get their footing out of the intermission.

The 13th-seeded Patriots (8-3) were set to receive the opening kickoff of the second half, trailing 27-25, but they were unable to recover an onside kick attempt where Rolesville’s kicker booted a line drive at a Pinecrest blocker on the front row for one of the Rams on the coverage team to recover, which the visitors did.

A rare empty drive in the second half for Rolesville preceded the Patriots driving the ball into the red zone where senior running back Xavier Dowd coughed a fumble.

“We don’t normally turn the ball over and normally special teams is one of our powers, one of our strengths,” Curtin said. “That’s just two unfortunate turnovers that we don’t normally have happen to us because of the quality of our kids.”

What followed after the fumble was three straight scoring drives from the Rams (6-5). Senior quarterback Byrum Brown torched the Pinecrest defense, which was without several starters in the back end.

Brown connected with Rory Jones for a 37-yard touchdown four plays after the Dowd fumble, on the next offensive he had a 74-yard touchdown pass to Noah Rogers and a 45-yard touchdown connection with Dejaun Mickens on the following possession pushed the lead to 49-32.

The senior quarterback passed for 363 yards and six scores in the win with a talented receiving corps that snagged highlight reel catches throughout the game. Jones was his top target in the game with 132 yards and three touchdowns.

A second comeback attempt from Pinecrest never came to fruition in the second half. In the first half, Pinecrest faced a 13-0 deficit that morphed into a 21-9 hole.

“It was an incredible fight the whole way through,” Curtin said.

To set up scoring drives in the first half, the defense got the offense back on the field with a pair of turnovers. Senior defensive end Will Brock played a part in both turnovers in his final high school game. The first was a ball that popped free that Brock fell on late in the first quarter to set up a Nahjiir Seagraves touchdown run of 22 yards, making it a 13-9 score.

A Mason Konen touchdown pass to Omar Pemberton on the next drive for the Patriots made it 21-15 with less than seven minutes until halftime.

Brock then had a strip sack of Brown that Tristin Griswell recovered for Pinecrest. Seagraves scored his second touchdown of the game six plays later as every play call on the drive went to him. His touchdown and Braden Cole’s extra point made it 22-21 with 3:47 until halftime.

Brown and Jones had their second touchdown connection of the night on the following drive with 19 seconds left to put the Rams back up, and for good.

Senior kicker Braden Cole hit field goals from 35 and 41 yards out. The second field goal came in the closing seconds of the first half.

Seagraves, a junior, rushed for 132 yards in the loss. Pemberton accounted for a pair of touchdowns as well. He had a 1-yard touchdown run late in the third quarter in his final high school football game.

Curtin, who took over this season on an interim basis after the resignation of longtime coach Chris Metzger, said that the 8-3 mark with a second-place finish in the Sandhills Athletic Conference puts the future of the program in the right direction as the administration will begin the search process for the program’s new coach this offseason.

“All I can say is whoever takes this job next is going to have the time of their life, but they better treat these kids with dignity and respect. And they have to understand that we have a Pinecrest tradition here,” he said. “I’m really proud of the coaches, and I’m proud of (Athletic Director) Jeff Hewitt and (Principal) Stefanie Phillips for believing in us. They could’ve just pickeds some guy with a name and went after it, but they went with the community.”