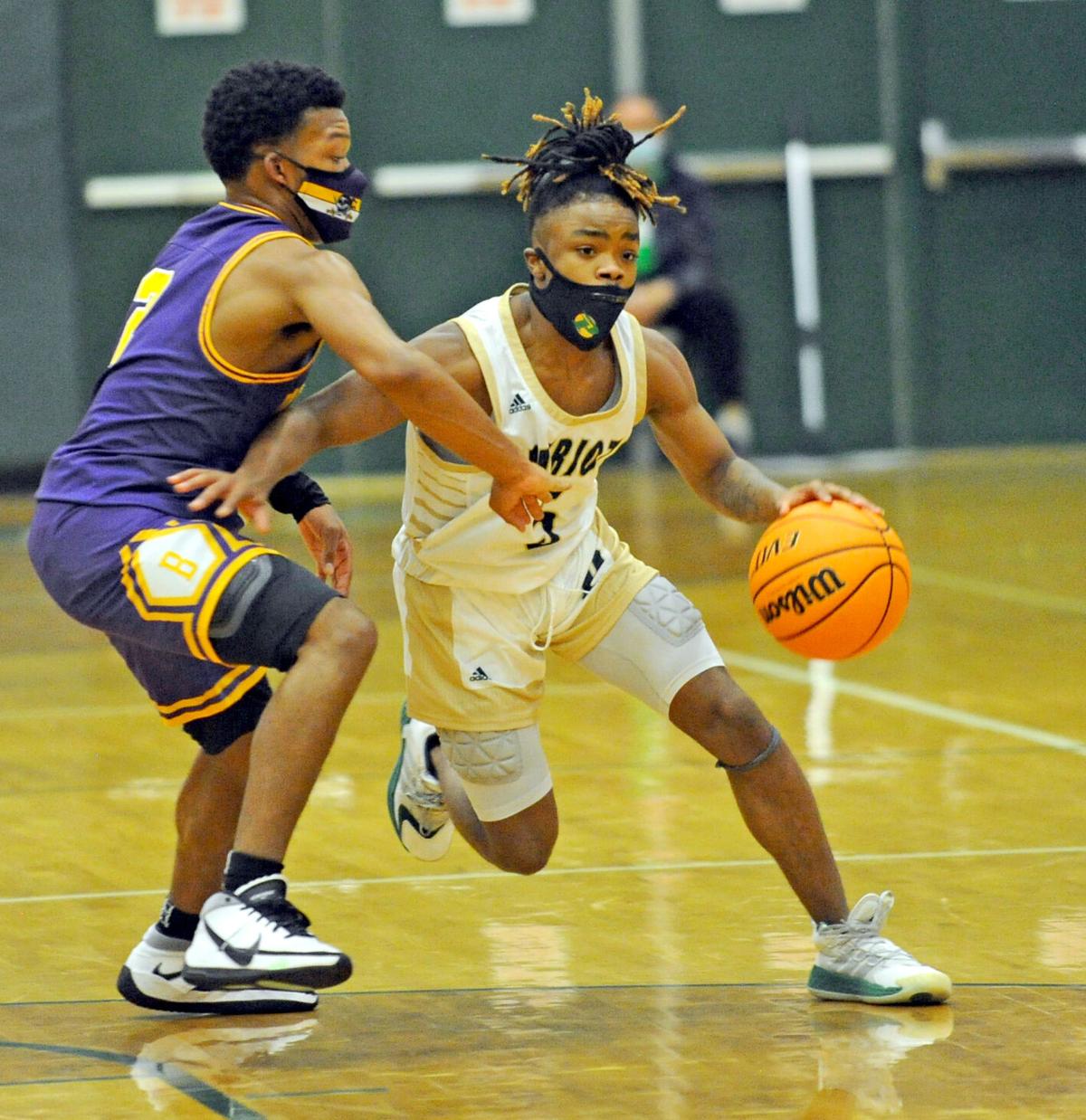 Pinecrest's J.J. Goins (3) drives against a Jack Britt defender in a game earlier this season. Goins had 10 points in the win for the Patriots against Seventy-First to advance to the Sandhills Athletic Conference tournament championship game. 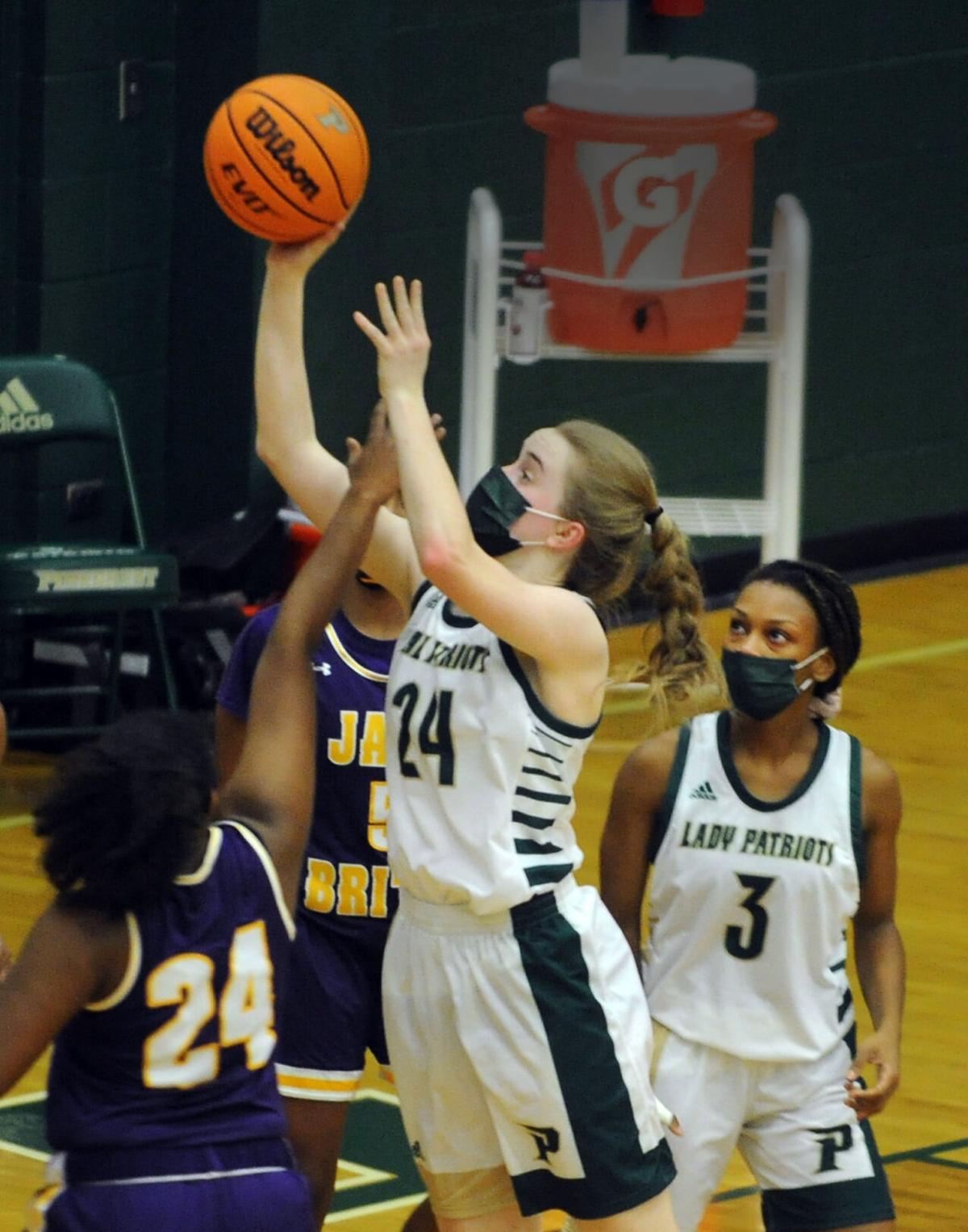 Pinecrest junior Emmie Modlin (24) goes up for a shot against Jack Britt earlier this year. The Patriots play Jack Britt on Friday for the conference tournament championship.

As a 10-point lead for the Pinecrest boys basketball team started to melt away over the final three minutes against Seventy-First at home on Wednesday night in the semifinals of the Sandhills Athletic Conference tournament, coach Ben Snyder saw his team begin to be more passive.

“To lose that 10-point lead, I thought we played not to lose, rather than to win,” Snyder said after the 75-70 overtime win. “It’s a learning experience, especially going forward.

“All the things you don’t want to do, we did them.”

Pinecrest hosts Lumberton on Friday in the conference tournament championship game at 6 p.m.

The response made by the home team in overtime after surrendering the double-digit lead in the final minutes was the opposite of how the team looked while the lead slipped away.

“I told them that 80 percent of teams that lose a 10-point lead going into overtime, they lose that game,” Snyder said. “That shows the character of this team to have all that go wrong, come out and get a bucket and a stop and all of a sudden we are back in control again.”

In overtime, senior Bradlee Haskell went 6-for-6 from the free-throw line to hold off Seventy-First after an early lead was established.

“I know that either I can get myself a good shot, or the defense is going to collapse and one of my teammates is going to be open. I do a pretty good job of getting them the ball when they are open,” Haskell said of having the ball in his hands in late-game situations. “It’s just experience being in those positions, knowing what to do and what not to do.”

Haskell's perfect overtime at the line came after missing two free throws with 12 seconds left in the fourth quarter and the score tied at 65-all.

“Next shot,” Haskell said of his approach at the line.

The senior guard finished with 27 points, 19 of which came in the fourth quarter and overtime.

After a Falcon turnover with five seconds left, Haskell was in position to set up Ian Blue for a 3-pointer in the corner before the buzzer, but the shot was off the mark, forcing overtime with the score knotted at 65.

“The great competitors love big moments and he fits that to a ‘T,’” Snyder said.

Blue had 17 points and J.J. Goins added 10 points for the Patriots.

Pinecrest created separation from Seventy-First in the second quarter on an 8-0 run with all the scoring coming from Blue, and took a 29-20 lead into halftime.

The Falcons cut the lead to 34-30 on a James Scott bucket with five minutes left in the third period. Goins and Haskell hit shots in the closing minute of the third to push the lead out to 44-34.

That lead stayed above six points until a pair of Randy Dockery free throws made it 58-53 with less than two minutes left.

The Falcons went 11-for-15 at the charity stripe in the fourth quarter to help cut the lead down. Scott was perfect, hitting all six free throws and scoring eight of his 14 points in the final stanza.

After scoring five points in the first quarter, the Pinecrest girls basketball team advanced to the Sandhills Athletic Conference tournament final for the fourth straight year with a 55-41 win at Seventy-First on Wednesday.

A matchup with Jack Britt, who beat the Patriots last year in the conference tournament championship, will be Friday on the road.

After the slow start, Pinecrest scored more than 15 points in each of the final three quarters to lock in the conference’s No. 2 seed for state playoff purposes.

Emmie Modlin scored all 14 of her team-leading points in the second, third and fourth quarters. Aniyah Jackson had 10 points, while Britteny Sparrow and Savannah McIntosh each posted seven points.