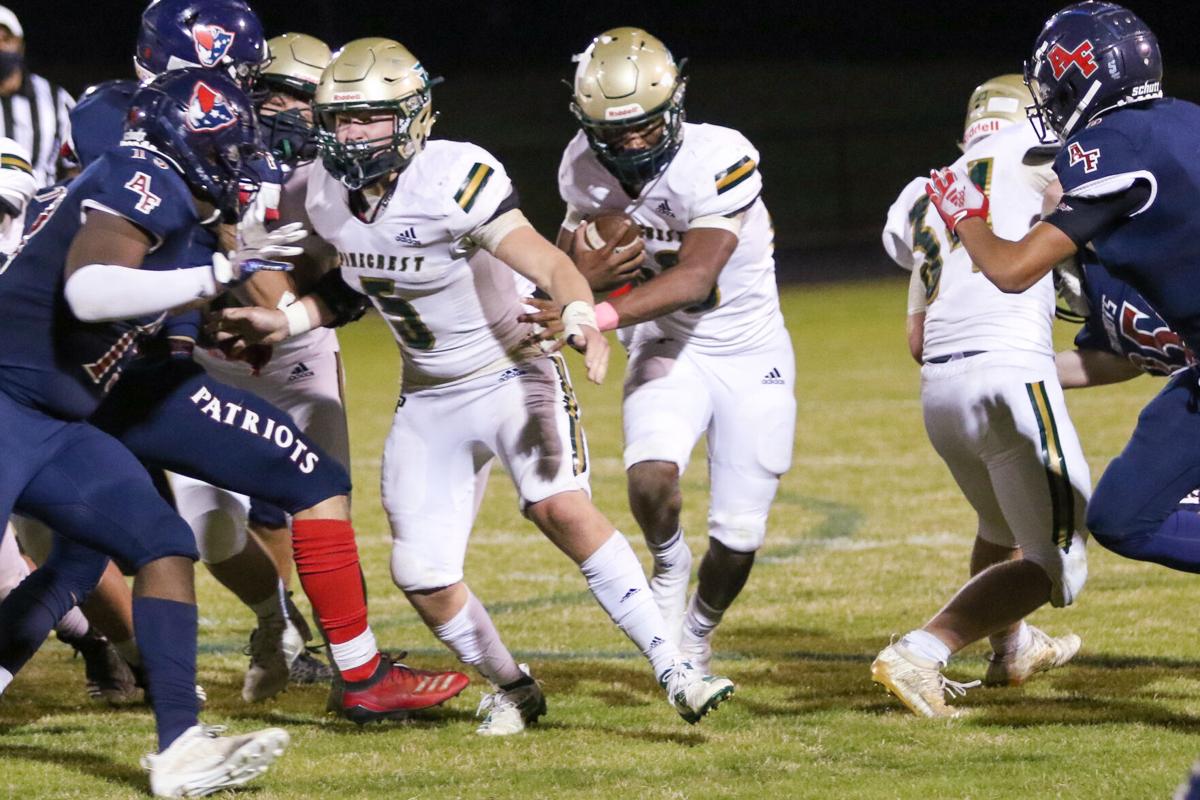 Pinecrest senior linebacker Gibson Macrae (5) sets a lead block for running back Xavier Dowd (38) to seal the win late with a third down conversion over Apex Friendship on Friday in the first round of the 4AA state playoffs. 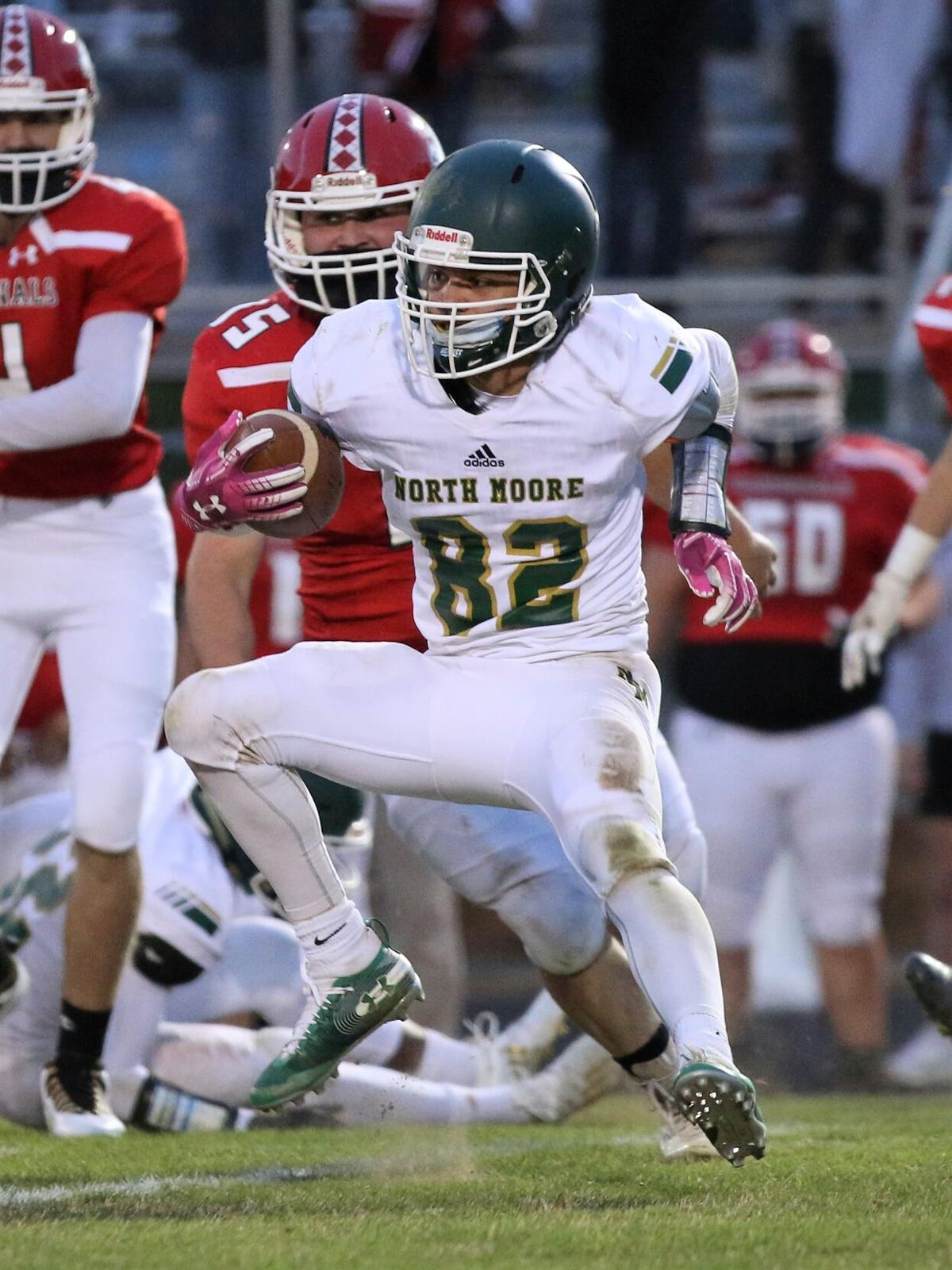 North Moore's James Ross (82) looks for a running lane against East Surry on Friday in the first-round loss in the 1AA football state playoffs. Ross scored the only touchdown for the Mustangs.

Finish has been the one-word mission for the Pinecrest football team this season after losing in the regular season finale and the first round of the state playoffs last year.

That message resonated with a group that were looking for their first playoff win as varsity football players and was exemplified late in the game at Apex Friendship on Friday night.

On a third-and-5 with a little more than a minute and a half left in the game, Pinecrest handed the ball off to junior running back Xavier Dowd and followed the lead block of senior linebacker Gibson Macrae who entered the game to clear the way for his running back. Dowd made contact with the Apex Friendship defense short of the line to gain, and his momentum carried him across the 45-yard line to secure a first down and the 24-17 win on the road in the first round of the N.C. High School Athletic Association’s 4AA football state playoffs.

“It was ugly, but it’s survive and advance,” Pinecrest coach Chris Metzger said. “There was a lot of adversity, but the kids kept responding.

“When you can win an ugly one like that, that’s what it’s all about.”

In a game that was far perfectly executed or cleanly played on both sides of the ball, Pinecrest (6-2) found a way to earn a spot in the second round of the state playoffs next Friday at Wake Forest.

“Elite eight. We’re in the elite eight and that’s a blessing,” Metzger said. “It’s kind of like March madness, but it’s in April. Boy, we’ve got to clean some things up.”

Pinecrest was called for 10 more penalties than Apex Friendship (7-1), and the 15 flags thrown on the visitors accounted for 174 yards lost on offense or given to the No. 1 seed’s pass-heavy offense.

With the score knotted at 10-all entering halftime, momentum shifted in Pinecrest’s favor on the opening drive of the half after Braxton Barber scored on a 1-yard quarterback keeper to cap off a five-play, 80-yard drive.

Dowd and newcomer from the JV team Nahjiir Seagraves carried most of the load in that offensive series and for much of the second half. Dowd finished with 129 yards rushing and Seagraves had 67 yards rushing.

“I’m just so proud of them,” Metzger said. “Those guys (the offensive coaches) just do a great job to get the kids ready and in the end, we did what we had to do to get a win.”

Both teams traded out empty possessions in the third quarter, and the green and gold Patriots ended a drive without points on the first play of the fourth quarter when Dowd came three yards short of a first down at the Apex Friendship 27-yard line.

On the next play, Pinecrest junior linebacker Noah Hartford saw the break he was waiting for all game in the passing lanes when he jumped in front of the route of an intended target for Apex Friendship quarterback Sam Lersch and returned the interception 28 yards for a touchdown to put Pinecrest up 24-10 early in the fourth quarter.

“At the start of the game, I saw the consistency of the flat right, so I started jumping the flat route,” Hartford said. “I just had to take it for the team.

“Losing to Jack Britt, we all had the hate to lose in our eyes so we came out here with 110 percent.”

The turnover was the only one forced on the night for Pinecrest’s defense against the red and blue Patriots, but time and time again the visitors’ defense stood up to the test.

Lersch completed 22 of 48 passes for 254 yards and one passing touchdown. The lone touchdown followed Apex Friendships’ only interception in the game by Jet Ayscue from Barber with 28 seconds left in the first half.

Lersch connected with Payton Bloom for a 54-yard pass and then with Ashton Locklear from 28 yards for a touchdown on a three-play, 82-yard drive in 24 seconds to knot the score at the intermission.

Pinecrest scored on its first drive of the game when Georgio Najm rushed for a 6-yard touchdown to put the Patriots up 7-0 early. Pinecrest’s second to last drive of the second quarter produced the other points on the board when Jeff Yurk connected on a 28-yard field goal to make it a 10-3 ballgame.

Apex Friendship came into the game averaging 31 points per game this season, but needed nearly all 48 minutes to post its 17 points on Friday.

The defending 1AA state champions flexed their muscle against North Moore on Friday at home as East Surry earned a 62-6 win in the first round of the 1AA state playoffs.

The appearance was the Mustangs’ first since the 2016 season.

“Our guys fought. We just made too many mistakes to beat a good football team,” North Moore coach Andrew Carrouth said. “Our focus was on making them drive the football and they did that for the most part tonight. There weren’t any one-play touchdown drives. Our guys rallied to the football and tackled.

The Cardinals (7-1) took a 27-0 lead into halftime before the Mustangs (4-4) put their only points on the board with a James Ross touchdown run.

The score came after North Moore recovered an onside kick on the opening kickoff of the second half.

Ross had to step up in the playoff game due to injuries for the Mustangs, Carrouth said.

“We haven’t had a rash of injuries since the North Rowan game in the first ballgame,” Carrouth said. “Tonight the injury bug kind of bit us a little bit tonight. We lost four or five in this ballgame and that played a role.”

Then East Surry responded by scoring 35 unanswered points over the next 12 minutes of game time.

East Surry quarterback Folger Boaz passed for three touchdowns and rushed for four more in the win. Two of the touchdown passes went to Ohio State commit Benji Gosnell, who had 124 yards receiving.

East Surry hosts Pine Lake Prep in the second round of the state playoffs next week.

Entering the season, Carrouth had doubts on if the Mustangs would be able to play more than three games this season.

“We just got done with our eighth ballgame in a row tonight. Our guys fought their freaking tails off and got themselves an opportunity to be there tonight,” Carrouth said. “They’re one of the 32 best 1A teams in North Carolina so we’re honored to have that opportunity and know what we need to build toward going forward.”