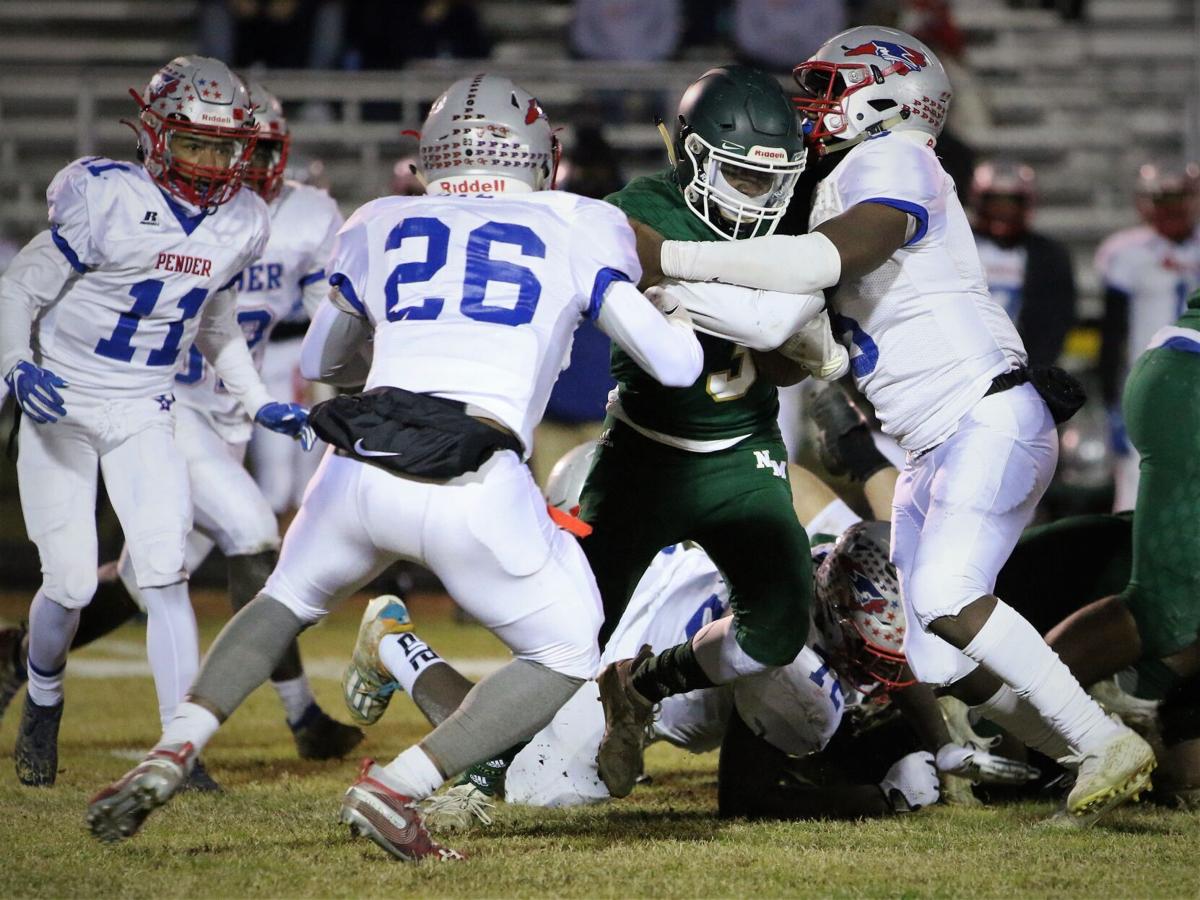 Two Pender defenders stuff a rushing attempt by North Moore's Javory Wall (3) in the third round of the state playoff in Robbins Friday. The 50-12 loss ends one of the best seasons in North Moore football history. 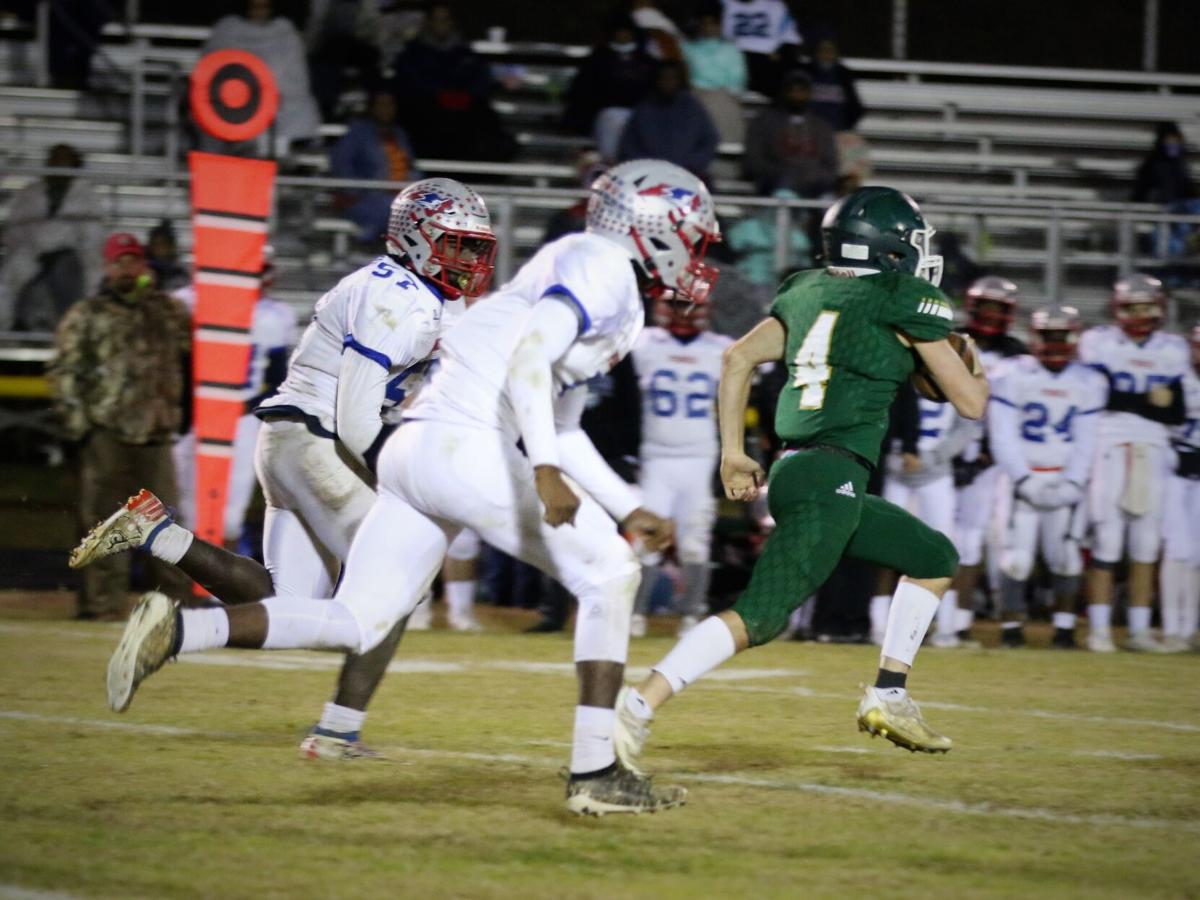 North Moore's Justis Dorsett (4) runs away from the defense on his 75-yard touchdown run Friday that was his final high school football carry.

Gathered under the shadows of one of the goalposts overlooking an empty football field Friday night, one word from North Moore coach Andrew Carrouth resonated through the frigid air to the ears of his team huddled up for one last time in uniform.

A 50-12 loss to Pender at home served as a third-round exit for the Mustangs from the 1A state playoffs. A bittersweet ending to one of the most fruitful football seasons the school has ever seen. The loss also marked the end of a 2021 calendar year where the perception of the program changed from the outside, and set the direction of course for the program moving forward with younger players seeing time late in the contest.

“What these kids have done has been incredible. Obviously not the way we wanted to finish tonight, but I could not be more proud of these kids. They have done such a great job,” Carrouth said.

Playing at home in the third round of the state playoffs for the first time in school history on the gridiron, North Moore (10-2) was attempting to set new program records with a first appearance in the fourth round of the playoffs, and a win would match the school record for wins in a season in the process.

An athletic and empowering Pender (9-3) team had their say, and won to advance to next week’s round of eight at Northside Pinetown.

Controlling the line of scrimmage for much of the game, the Patriots jumped ahead 16-6 at halftime, and then scored 34 unanswered points to further tighten their grip in the win.

Injuries and an early disqualification sent Mustang after Mustang to the sidelines, allowing the reserves to take the field for valuable minutes.

“It was kind of next man in, and it kind of threw us out of what we wanted to do game plan wise,” Carrouth said. “We were already thin, and as soon as those injuries happened, it made us even more thin in certain places. We had a lot of guys that stepped up when they got on the field and got after it. That’s a lot to build off of.”

Before having to go out with an injury in the second half, sophomore Elliott Furr scored on a 4-yard touchdown run early in the second quarter to cut the Pender lead to 8-6.

As one of the leaders that will return next fall, the linebacker and part-time fullback understands what this season meant for both him and the Mustangs as a whole.

“I saw a lot of our guys fight back. Injuries really hurt us; guys went down that were really important to us, but some of the young guys stepped in and showed what they can do,” Furr said. “It’s just handing the torch down. We’ve got to keep winning ball games and make them proud.”

With the change on the field brought a change to the gameday atmosphere, Furr noticed.

“It was amazing coming out here and seeing the stands packed every Friday night,” Furr said. “The whole town was behind us and they shut everything down to come and watch us.”

A two-year starter at running back since coming to the program last school year, senior Justis Dorsett closed his career with the same fireworks that he flashed time and time again through the last 18 games when he rushed for a 75-yard touchdown with less than two minutes to go to bring the score to its final. The play ended up as his final handoff in high school.

“Nothing was really open the whole game. They had me locked down. It felt great for the last play of my high school career to be a really long touchdown,” Dorsett said. “They were a really good team. They were tough, but we didn’t really give up. We had a lot of injuries but we kept fighting.”

Still exploring his options for the next level, Dorsett realized what his short time as a Mustang meant for the years to come for the program.

“It’s something special and something that I think everybody in the senior class will remember for the rest of their life,” Dorsett said.

With the exodus of the top scorer over the last two seasons, North Moore has a lot to build from the most successful team the program has fielded in over a quarter of a century.

“We return our entire offensive line next year, we return both of our tight ends,” Carrouth said. “The big thing for us is to get our guys to understand that against a really good football team like what we played tonight, we’ve got to be lower, physical and more nasty than we were tonight.”