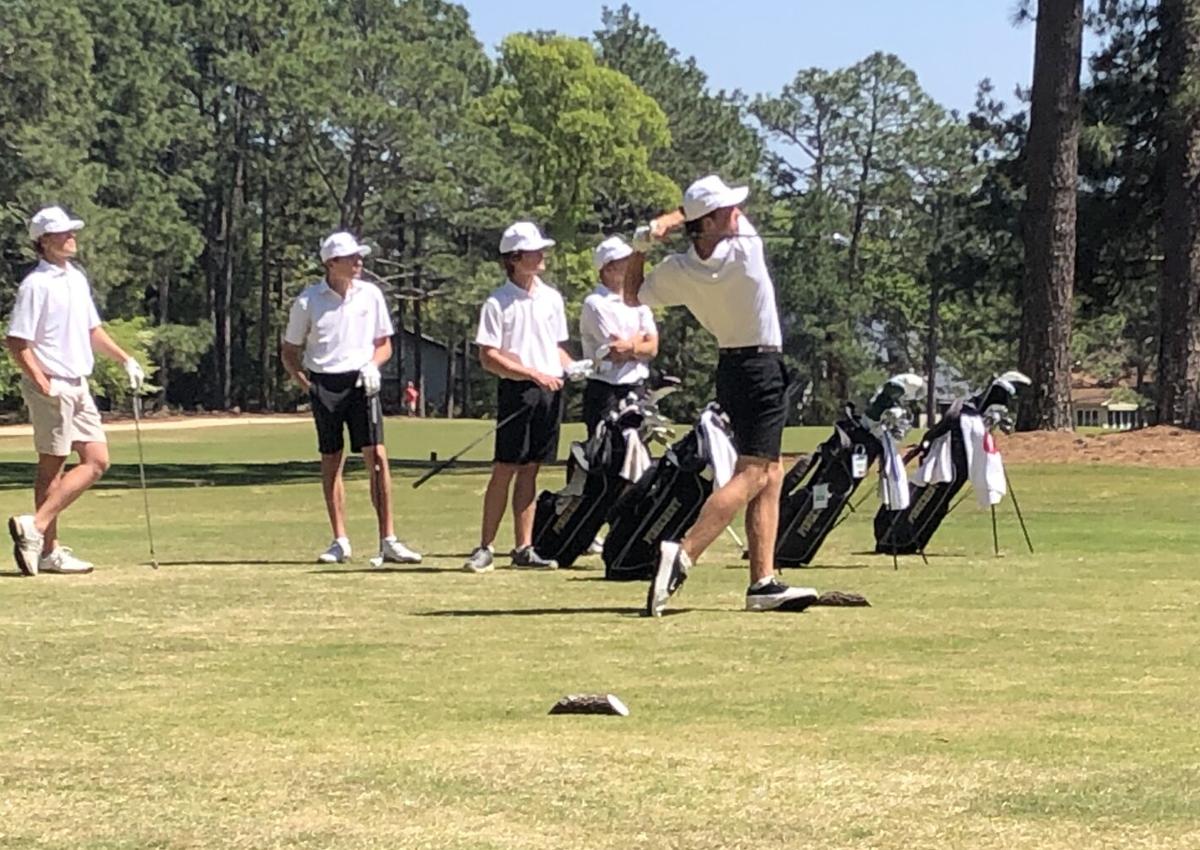 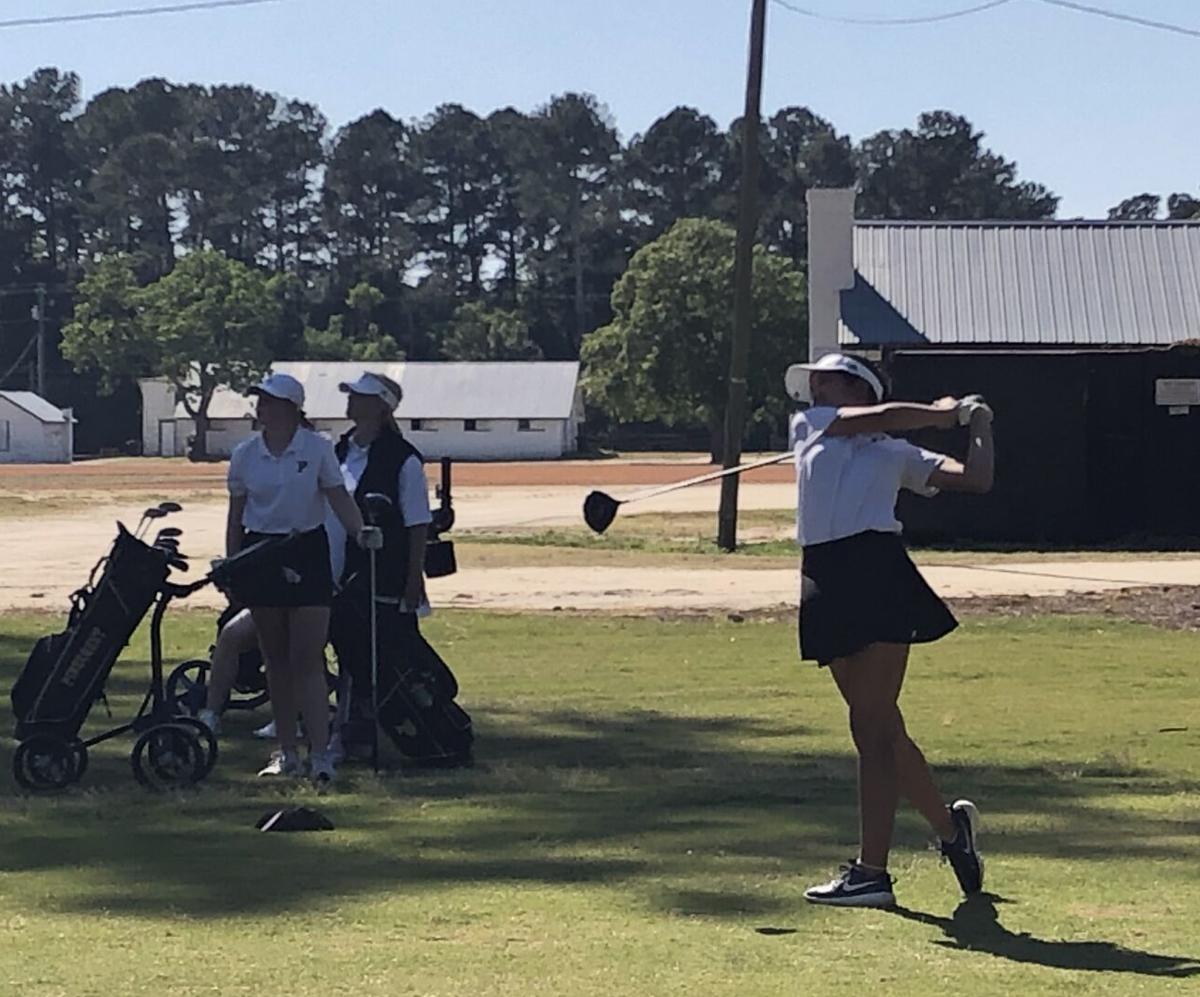 Pinecrest's BB Rujiranan hits a drive off the second tee on Monday during the conference championship on Pinehurst No. 1. Rujiranan claimed medalist during the event.

While there was happiness by the Pinecrest golf teams at the end of the Sandhills Athletic Conference championships hosted Monday on Pinehurst No. 1, the boys and girls champs concluded its domination by continuing to focus on the next step.

That comes next week at the N.C. High School Athletic Association regional tournaments in an effort to secure a spot in the state championships that will be hosted at Pinehurst in two weeks.

The Pinecrest boys and girls golf teams swept the team titles and both teams had the top individual finishers in the event.

Senior Jackson Van Paris finished with a round of 67 to take medalist honors on the boys side, while freshman BB Rujiranan finished off the conference season with a 78 as she won medalist in every event this season. Both players were named conference player of the year.

The Pinecrest boys team score was a 4-under-par 276, and the girls finished with a 355.

The scores from the Pinecrest boys followed up with Colin Dutton’s 68, Jackson Bode’s 70, Caden Bertagnole’s 71and Holland Giles’ 76 on the par-70 tract.

“We’ve had a really good team this year and we’ve been able to set good goals for ourselves the entire year,” Van Paris said. “Our team is deep too. I feel like we haven’t had the same four scores counting all year. It’s really good competition. It’s fun going out there and knowing that each of us have to play well because even though we are rooting for each other, we want to beat each other too.”

Despite the round under par, Van Paris said there were putts he left out on the course, and his final drive of the day landed out of bounds for a double bogey to go along with his four birdies and an eagle on No. 18.

“Anytime you shoot in the 60s is always a good round,” Van Paris said.

The season is Van Paris’ first after transferring to Pinecrest prior to last season. That season was cut short due to COVID, but the group of returners to this year’s team are just as driven given the circumstances.

“We all have to play well to beat each other. I can’t just go out and play decent and expect to be everyone else on the team,” the Vanderbilt golf recruit said. “To have this season with everything going on with COVID and everything, we’re just lucky to be playing golf.”

Over the next two weeks, Van Paris said that focusing on what the team controls is what the team has in focus as it takes on newer opponents at the regional and possibly the state level.

“We’ve just got to do our best,” he said. “We know that if we play our game, I think other teams are going to have a hard time beating us.”

Kitson O’Neal finished two shots back of Rujiranan with an 80 on the girls side, Chloe Peters had an 81 and Chloe Derusseau carded a 116 to round out the Patriots’ scoring.

“I think we’re getting a lot better from the first day I met them,” Rujiranan said. “I want the team to win.”

After playing the first eight holes at 5 over, Rujiranan’s lone birdie of the round helped her improve by four strokes on the front nine. That birdie game via a chip in from right of the green on No. 1.

“The mistake that I had on the first eight holes was my putting. I had a lot of three putts,” Rujiranan said.

Monday’s round was another step in the right direction for Rujiranan as she continues to inch closer and closer to the goal of playing a round at or under par.

“I feel like I could make it to 72 by the end of the season,” Rujiranan said. “I didn’t really expect to get all the medalists this year because I know Kitson is really good too.”

Regionals for the Patriots will be on Monday for the boys and Tuesday for the girls. The boys regional site will be Jamestown Park, and the girls will play at Pinehurst No. 6.