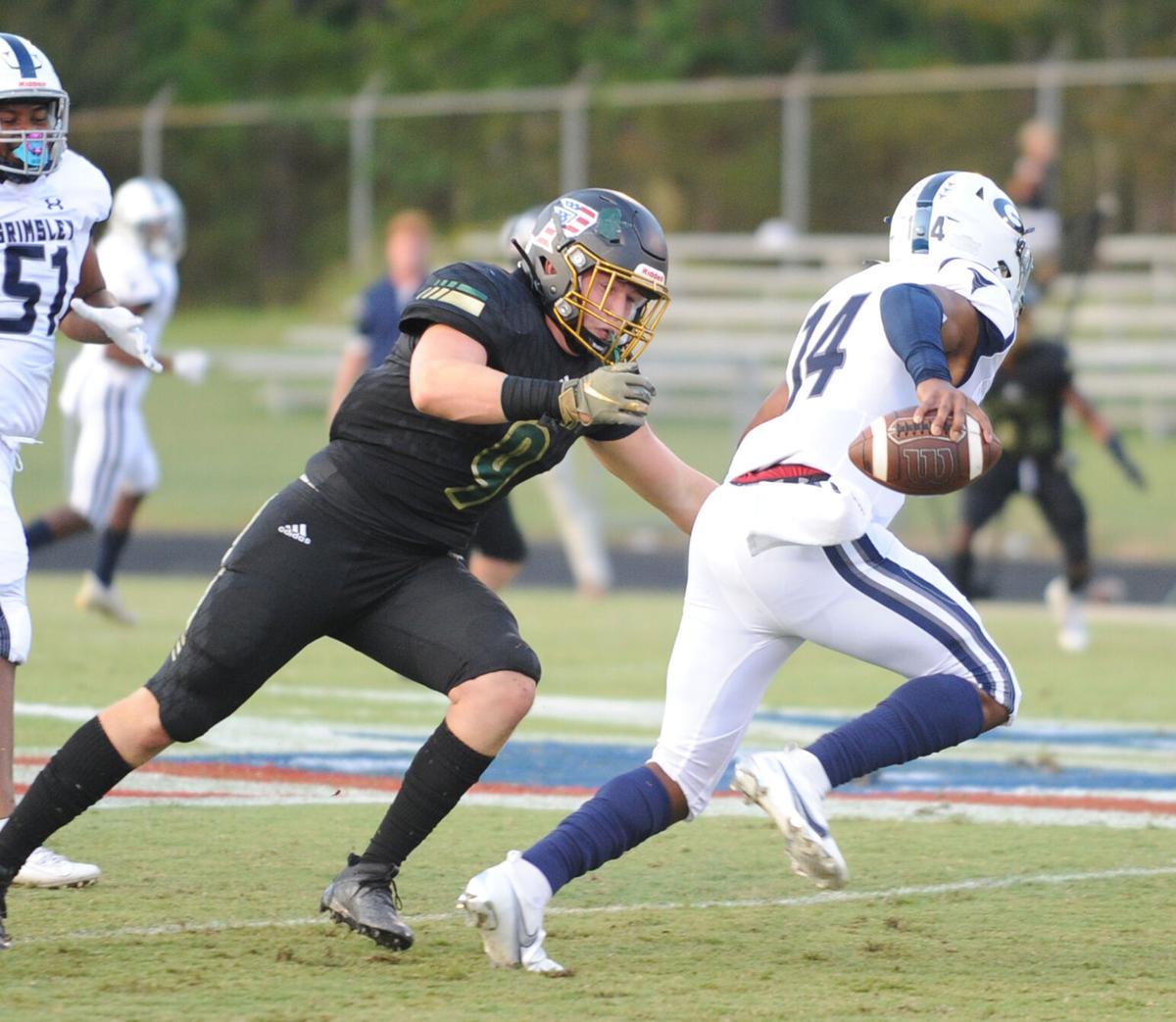 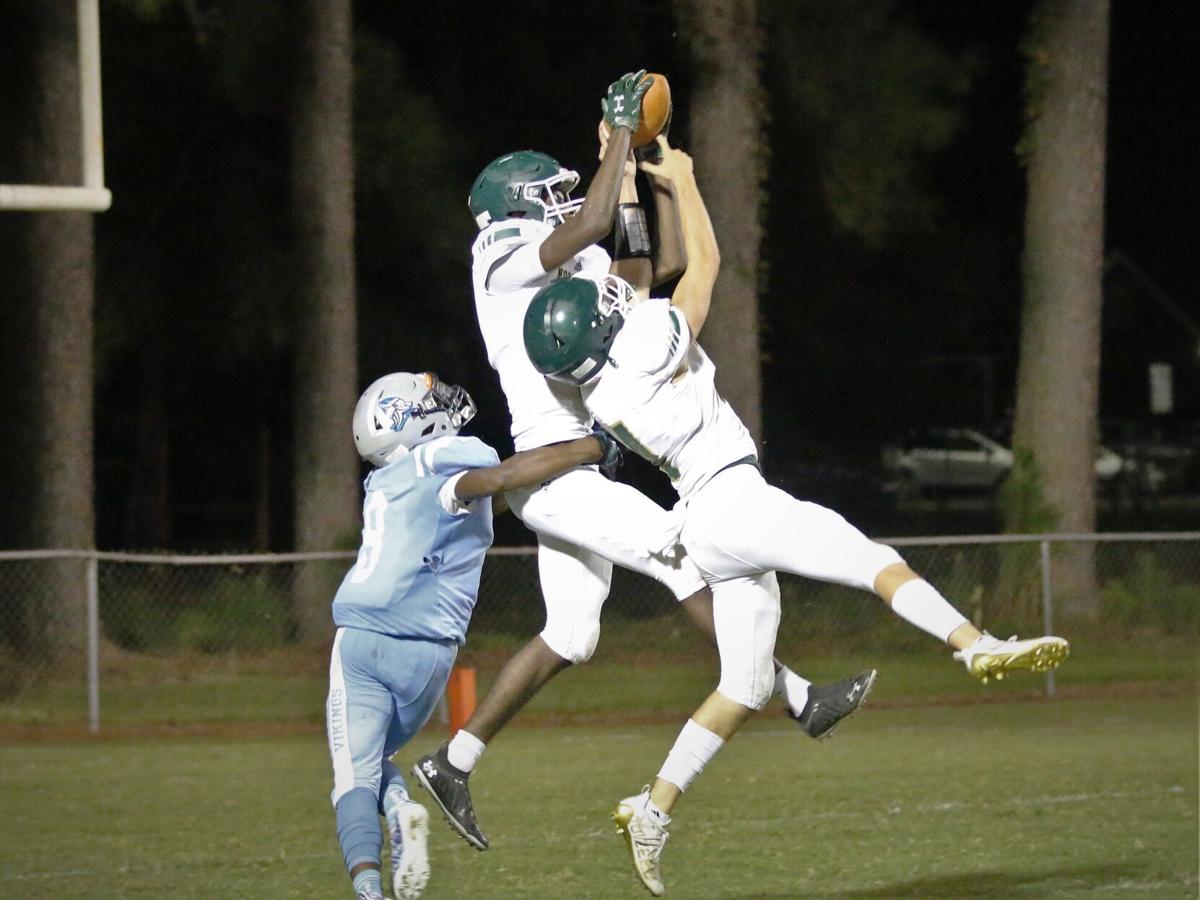 North Moore's Olajawuan Person, middle, and Justis Dorsett, right, go up for an interception against West Columbus Friday. The North Moore defense claimed three interceptions in the win to improve to 4-0. 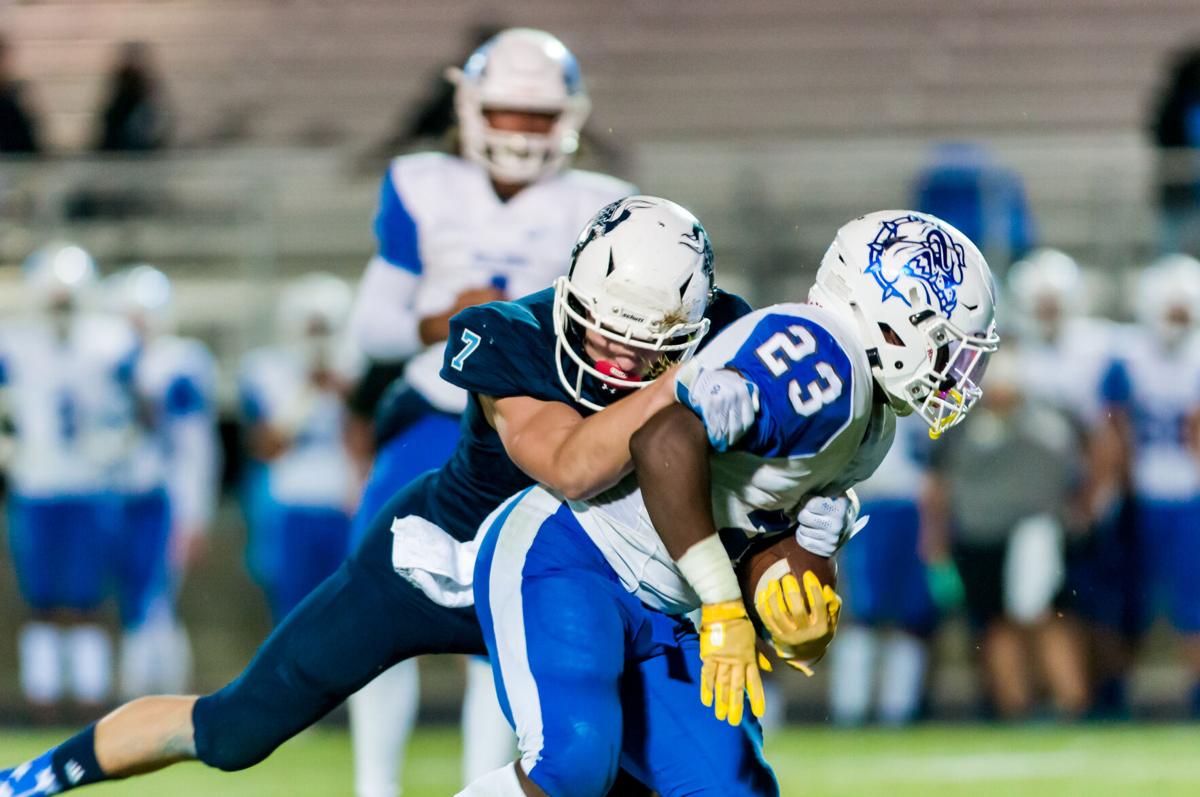 Union Pines' Christopher Gilbert (7) stops St. Pauls running back Kemarion Baldwin (23) in action during a game between the Union Pines Vikings and the St. Pauls Bulldogs Friday. The Bulldogs defeated the Vikings, 48-6.

The passing games for the Pinecrest and Grimsley football teams were polar opposites Friday in Southern Pines.

The visiting Whirlies’ offense was led by the passing of senior quarterback Alonza Barnett III. An injury on the opening drive to Pinecrest senior Brodie Karres forced the Patriots to go to the bench, and six interceptions were thrown by the two back-ups as Grimsley scored two touchdowns in the second half for a 28-14 win.

“You aren’t going to beat anybody with six interceptions,” Pinecrest coach Bob Curtin said. “We just had a lot of trouble turning the field with our offense in the second half.”

Pinecrest (3-1) now heads into its bye week ahead of a matchup to start Sandhills Athletic Conference play in two weeks against Richmond.

After a first half where both teams traded out scores to share a 14-14 tie at the intermission, Pinecrest’s first five plays on offense in the second half produced two interceptions from sophomore quarterback Mason Konen.

“It’s not like I’m upset that we threw them because we were going after some things,” Curtin said. “It was some young guys and some timing routes that may not have been there like they should have been.”

On the drive between the two turnovers, Barnett connected with Terrell Anderson for a 30-yard score to put the Whirlies (3-0) up 20-14. The duo connected for a 14-yard touchdown pass late in the third quarter to put Grimsley up 28-14.

After Konen tossed his fifth interception, and fourth of the second half, Pinecrest went to senior Robert Hyder at quarterback. He completed his first pass to Diondre Morman for a 40-yard gain, moments before a pass into the end zone was picked off by Grimsley’s Tyler Clyburn for his third interception of the night.

Pinecrest struck first on its second drive of the game with a 4-yard touchdown run by Xavier Dowd. Grimsely responded with back-to-back scores in the second quarter when Barnett rushed for a 2-yard touchdown, and then connected with Tyson Resper for a 54-yard touchdown with 2:12 left in the half.

A short field set up by a Nahjiir Seagraves kickoff return led to Pinecrest tying the score on a 10-yard touchdown pass from Konen to Cullen Martin.

Barnett finished with 268 yards passing and three scores through the air.

“We are going to take this and drive harder in practice and go harder in practice,” senior Kesler Atkinson said. “When we’re playing a tough offense, we’ve got to be the one sometimes to bring it every time. Even when we are down.”

Mustangs Come Back to Down West Columbus

Trailing in the fourth quarter for the first time this season, the North Moore football team rallied late on the road to claim a 22-18 win over West Columbus.

"We were talking to the guys this week that we have yet to be in a 10-round heavyweight fight. A lot of our games have been quick knockouts," North Moore coach Andrew Carrouth said. "We wanted to go into the later rounds and see how our guys respond and tonight we did and our guys gutted it out."

The 4-0 start to the season for the Mustangs is the first time since the 1994 season.

The difference in the ballgame came in what many see as a formality. Both teams crossed the goal line for three touchdowns, but North Moore was able to convert two extra-point tries as well as a two-point conversion. Conversely, the Mustangs stopped all three two-point conversion tries by the Vikings.

Carson Brady, Justis Dorsett and Elliott Furr had touchdowns in the win.

Furr also had one of three interceptions for the North Moore defense, as he was helping fill the void that came with fullback/linebacker Brian Loza missing the game due to injury.

"With Brian out, we asked Elliott to really step up offensively and defensively," Carrouth said. "He did and he was huge for us tonight scoring a touchdown and also having that interception."

Olajawuan Person collected his fourth and fifth interceptions of the season in the win for the Mustangs as well.

North Moore enters its bye week this week and will play at home against Bartlett Yancey in two weeks.

Despite the lopsided score, Union Pines coach Jason Trousdale liked the toughness shown by his team against the physical Bulldogs.

"The toughness is definitely different this year from the last two years," he said. "We just have to come back and get more physical in the weight room  and little faster as we continue chopping away at getting better."

The Vikings (0-3) were shut out until the fourth quarter when Jordan Hoffman scored the lone touchdown of the night.

The game also provided the best offensive flow the Vikings have had all season, Trousdale said.

"We kept doing the little things. Just regular, basic football," Trousdale said. "The more we play the better the kids' understanding of the process will be. I can tell that they care based on their eye contact when we talk to them. They want to be better."

The defending 2AA state runners-up were led by three rushing scores from running back KeMarion Baldwin and three touchdowns through the air in the win.

"Now conference play begins and the games will only get tougher," Trousdale said. "That's why playing a team like St. Pauls will help up prepare for those types of opponents."