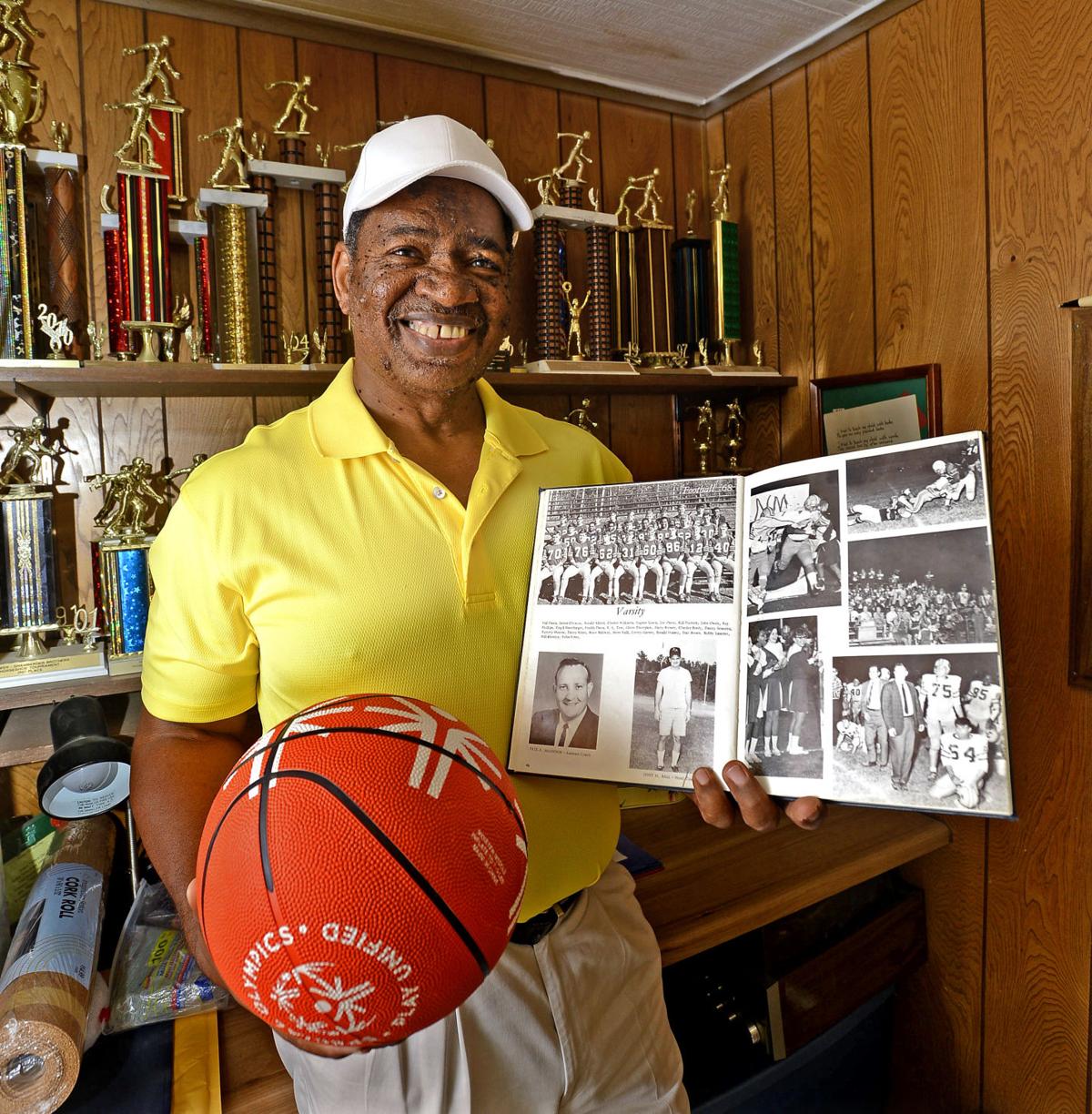 Vergil Shamberger holds a yearbook from his days at North Moore High School in his home. Shamberger passed away on Feb. 18 and is remembered for both his athletic and coaching accomplishments, but for his passion and positivity in the North Moore area. 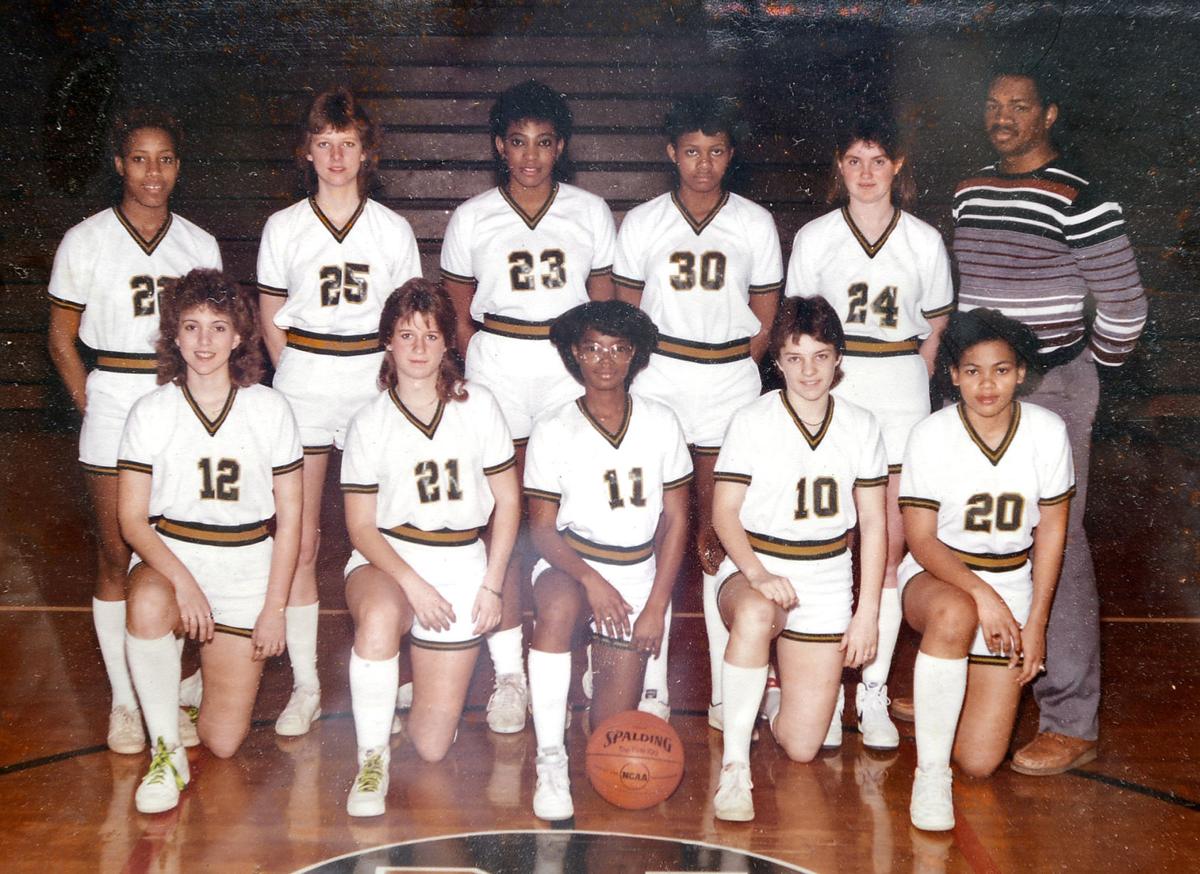 A copy shot of Mr. Shamberger with his first varsity basketball team from 1985. Vergil was a star athlete in track and football and other sports at North Moore. He taught at the school for over 30 years.

Vergil Shamberger holds a yearbook from his days at North Moore High School in his home. Shamberger passed away on Feb. 18 and is remembered for both his athletic and coaching accomplishments, but for his passion and positivity in the North Moore area.

A copy shot of Mr. Shamberger with his first varsity basketball team from 1985. Vergil was a star athlete in track and football and other sports at North Moore. He taught at the school for over 30 years.

As a student, Vergil Shamberger put North Moore High School on the athletics map as its first representative in the East-West All-Star football game and the first to win a state track championship — a feat he achieved in both high and low hurdles.

Upon returning as a teacher and coach, he dedicated another three decades to the school, and to the generations of athletes following in his footsteps.

Now North Moore is considering honoring Shamberger’s legacy by christening its football and track stadium in his honor.

After a collegiate career playing football at Shaw University in Raleigh, Shamberger hung up his cleats to devote his attention to his other calling: teaching.

“Most people that know me will tell you that I really enjoyed working with children, and that one of my greatest assets was working with them,” Shamberger said. “I just happened to get a job in the field of education and enjoyed myself the whole time I was doing it.”

He returned to the North Moore football field without delay, serving as an assistant coach for 32 years. As a head coach, he led the track and women’s basketball teams to conference championships and also coached junior varsity baseball.

Shamberger credits coach Jerry Ball with much of his success as a high school and collegiate athlete, and views his coaching career as a natural progression in the tradition of positive coaching at North Moore.

“I was just glad to have been able to help someone along the way,” he said. “I’ve been fortunate to have some some great athletes come through.”

Gayle Simmons, a North Moore alumna herself, suggested Shamberger as the stadium’s namesake based on his reputation and on her experience with him as her children’s coach.

Rather than regarding a single championship season or star athlete as the pinnacle of his coaching career, Shamberger treasures the memories made as he guided students to grasp the full extent of their abilities on the playing field and in life.

“It was just seeing the maturity grow from year to year as our players developed from the beginning of the year in sports to the end of the year, or if I had them a couple of years, you would see their growth from one year to the next,” he said. “It was just pleasing to see that happen.”

Shamberger retired in 2007 and continues to live in Robbins. The prospect of seeing his name emblazoned on the field that was his second home for 36 years leaves him awestruck.

“It’s humbling to be thought of that highly,” he said.

North Moore will gauge public support for naming the football stadium in a forum at 6:30 p.m. on Aug. 30 in the school media center. The school is also taking input through an online survey accessible at ncmcs.org/nmhs. Respondents can vote “yes” or “no” to the proposal and elaborate with additional comments.

According to North Moore Principal Jenny Purvis, nearly 100 people have already registered their approval of the idea. Many of the respondents have been Shamberger’s former athletes and colleagues, who recall him as a firm but encouraging coach who held his players to a high standard.

“Folks really admire Vergil Shamberger; they know his commitment to the students of North Moore and the community,” Purvis said. “He represents everything we try to get our kids to be, which is kind, good and fair.”

As a coach, Shamberger lived by example and never resorted to belittling his athletes as he helped them improve.

“He knows how to get the best out of people and yet be respectful of them,” said Simmons. “He’s just a very good person. His accomplishments in his career don’t overshadow the kind of person that he is.”

The Moore County Board of Education at its September meeting will review the opinions submitted before taking a vote on the name “Vergil Shamberger Stadium.”

North Moore’s baseball and softball fields will also be named this fall for Johnny Nesbitt and Cheryl Brewer. Those changes have already been approved by the school board.