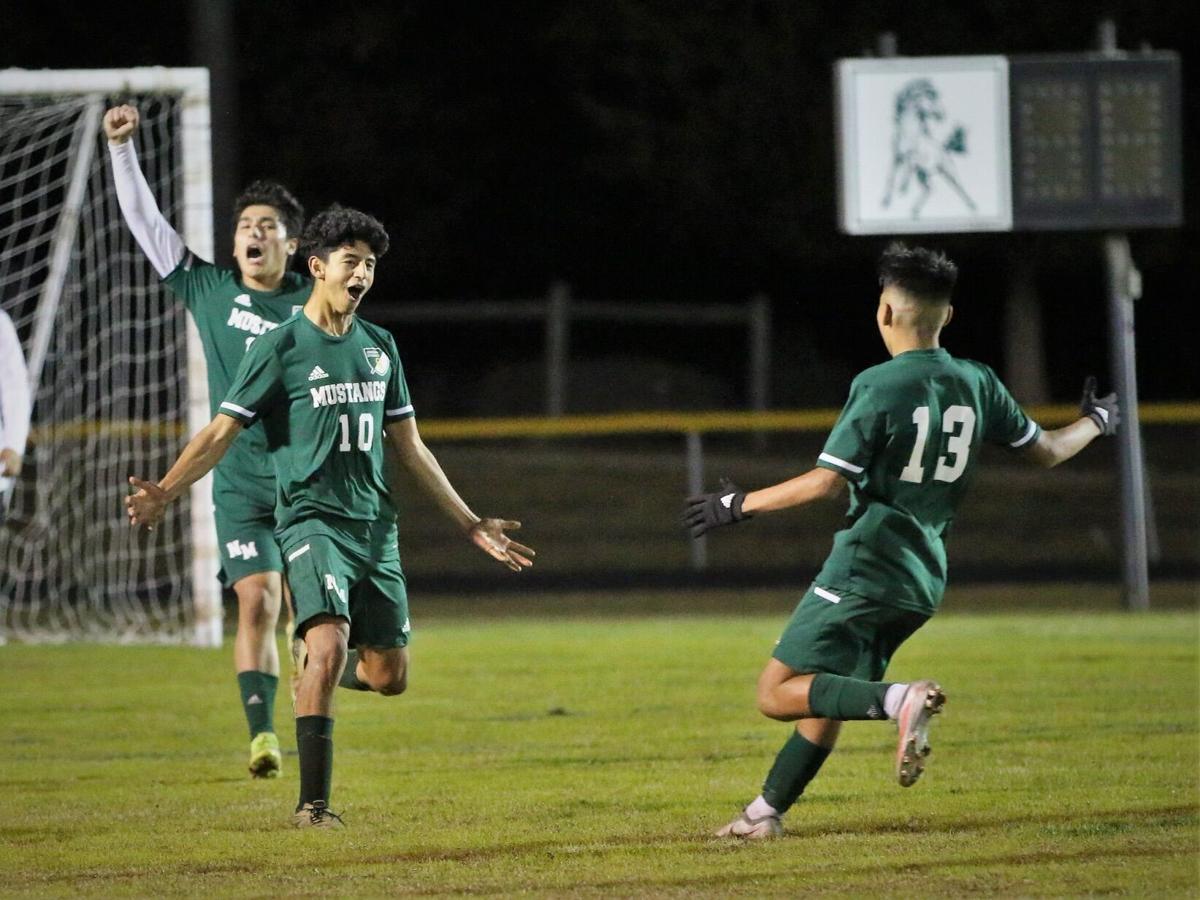 North Moore senior Fernando Martinez (10) celebrates his second-half goal with Christopher Velazquez Avila (13) against River Mill in the third round of the 1A boys soccer state playoffs Monday at home. 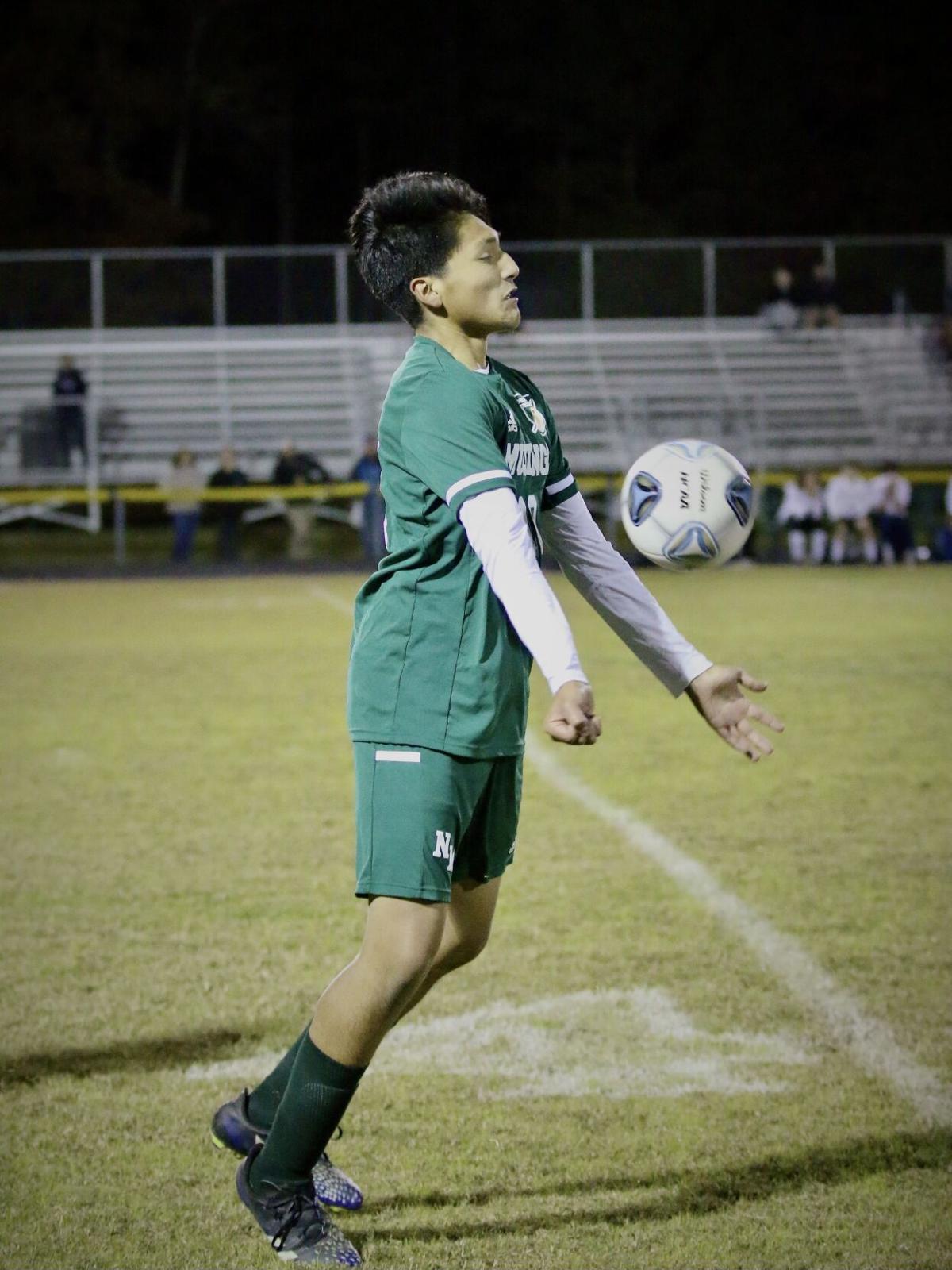 For many of the 10 seniors on the North Moore boys soccer team, making a run to the fourth round of the state playoffs as a freshman has been a marquee moment in their high school careers.

The next two seasons saw the Mustangs fall short of making a deep run back to the regional semifinals, adding fuel to the fire that now is burning strong for the team. With its second shutout win this playoff run, North Moore is back into the fourth round of the 1A state playoffs following a 3-0 win at home over River Mill in the third round Monday.

Coach Luis Peralta was in his first year with the program when the Mustangs made it to the fourth round in 2018, but sees similarities in both runs the program has made.

“It’s a totally different and new group, but we are still Mustangs and we want to continue winning,” Peralta said.

The Mustangs travel to second-seeded Rosewood in the fourth round Thursday.

Even after clinching a spot in Thursday's fourth round, but still unsure of who the opponent might be, senior Fernanado Martinez voiced his opinion on who he wanted to face next.

“We don’t want to play at home next round. We want to go play against Rosewood and see if we can take them down,” Martinez said. “They’ve got a pretty good record, and we want to show them we’re better.”

The last two playoff games have seen the Mustangs play some of their best soccer this season, passing the ball effectively and controlling the midfield against a technically sound River Mill team Monday.

Martinez scored his first of two goals in the match with six minutes left in the first half after a shot from the right wing was deflected by the River Mill defense, right to his feet in front of the goal. A slight bobble of the ball on his first shot attempt allowed the Jaguars defense to close in, but Martinez was able to sneak a shot in for a goal and a 1-0 lead.

Early in the second half, Martinez was on the receiving end of a perfectly-placed cross into the 18-yard box from fellow senior Brian Loza. By getting a head on the ball, Martinez guided his second goal into the net to take a 2-0 lead with less than 32 minutes to go in the match.

“You’ve got to score on a pass like that,” Martinez said.

Peralta said that Martinez is a calming leader for the Mustangs attack when he’s on the field, and his direction helps the offensive flow of the team

“He helps us a lot, whether he is playing forward or midfield, but he’s the guy that can keep the ball and hold it until we have people to help him out,” Peralta said.

The third goal came in the 70th minute from senior Jovanny Benitez-Cruz.

Peralta has seen his seniors take control of the team this season, and that goes past the goal scoring.

“They push each other. Each one of them have become leaders, even the quiet seniors,” Peralta said. “I’ve got 10 seniors and all of them put in a little bit of everything to make this team strong.”

Adding to what is driving the Mustangs this playoff run also is proving wrong those that doubt them.

“We’ve got a pretty good record, and we’ve been playing pretty good in the playoffs,” Martinez said. “People, like our classmates, have doubted us. We want to prove them wrong every game.”