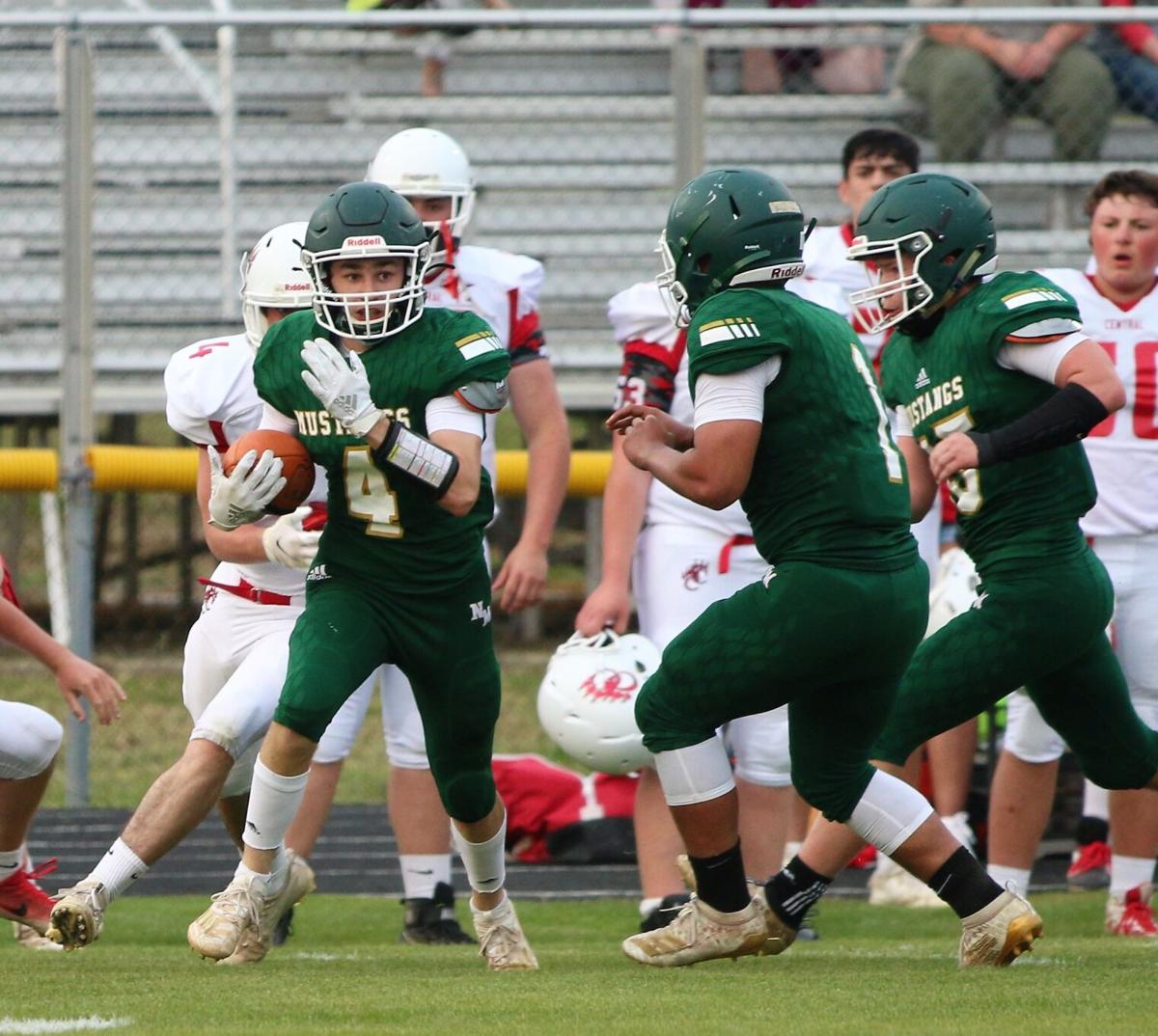 North Moore junior Justis Dorsett (4) runs with the ball against Chatham Central in a game this season. Dorsett was named the Yadkin Valley Conference co-player of the year this season as he helped lead the Mustangs to the playoffs. 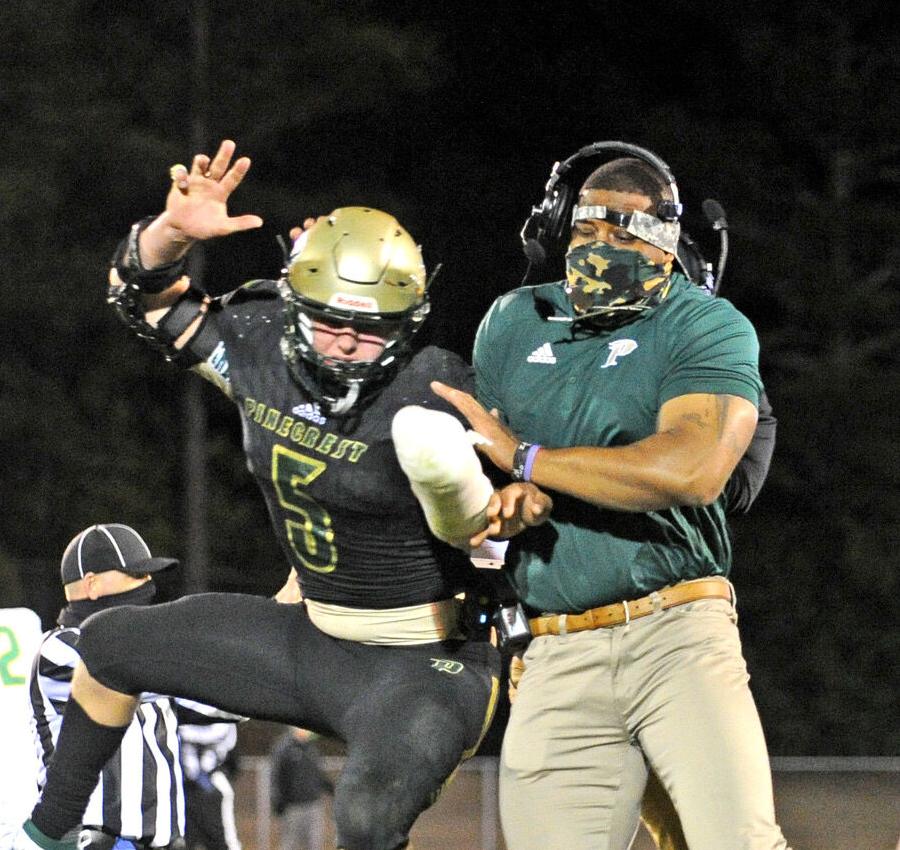 Pinecrest linebacker Gibson Macrae and defensive coordinator Antwon Murchison celebrate after a stop against Richmond this season. Macrae was named the defensive player of the year in the Sandhills Athletic Conference. 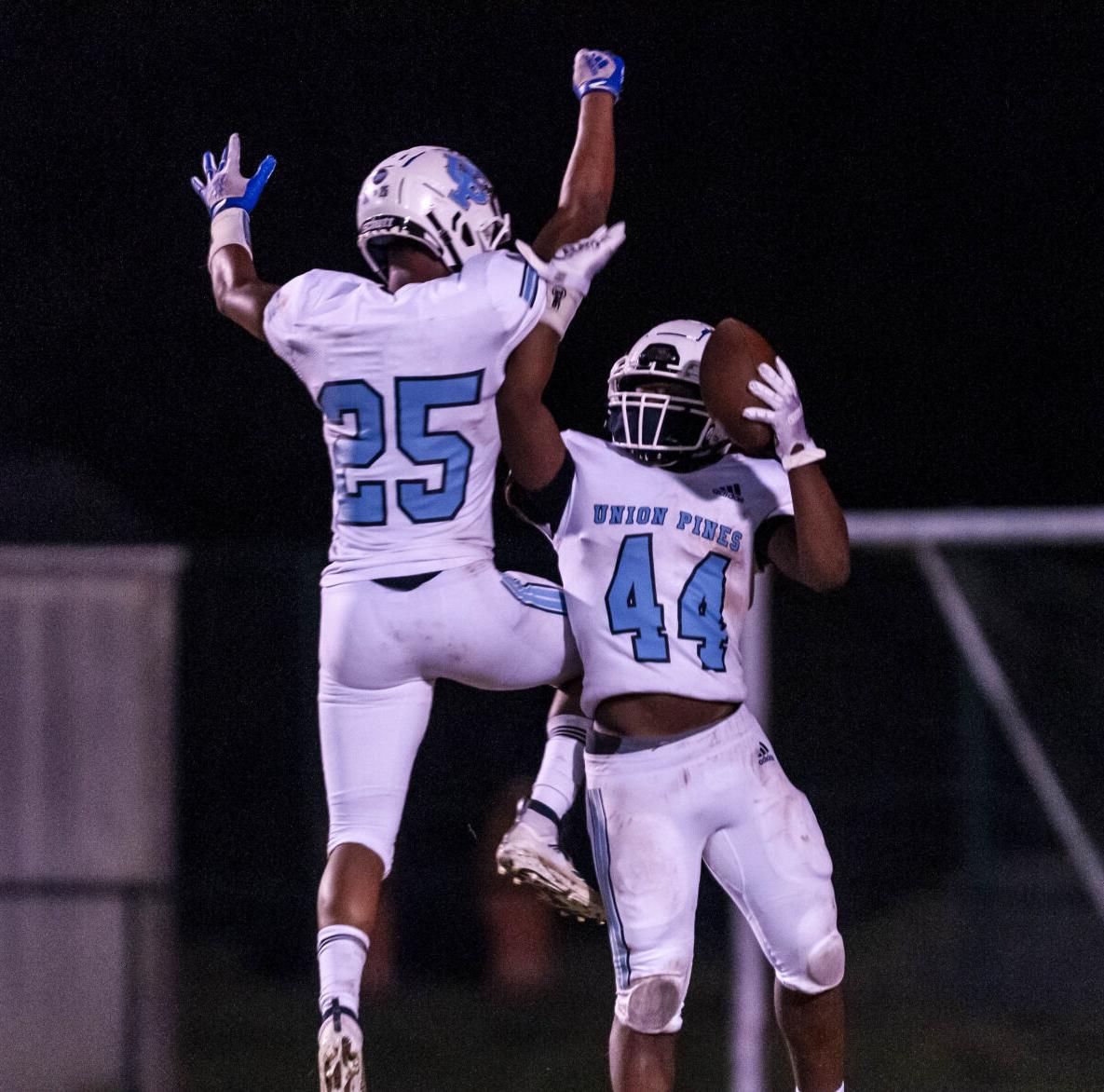 Union Pines' Ahmad Jones (44) celebrates his touchdown with Josh Eberhart (25) against Southern Lee this season. Jones was named special teams player of the tear for the Tri-County Conference, and Eberhart was one of five players from Union Pines named all-conference.

Three Moore County high school football players earned individual awards from their respective conferences for their play this season after the leagues released their all-conference awards.

In total, 24 football players from Moore County were named all-conference this season.

The Patriots advanced to the second round of the 4AA state playoffs this season, and the team had nine players, including Macrae selected all-conference.

Macrae had 95 total tackles, four tackles for loss and recorded the game-winning safety against Hoke County in the season opener this season for the Patriots. He has committed to play football at the University of North Carolina. In five of the seven games he played in this season, Macrae had 12 or more tackles, including 18 in the game against Jack Britt.

Joining him on the all-conference team from the defensive side of the ball were senior lineman Bryson Coe, senior linebacker Nick Garbark and junior defensive back Noah Hartford.

Garbark had 66 tackles and two fumble recoveries, including one for a touchdown this season. Hartford led the Pinecrest secondary with five interceptions, and had a pick six in the first-round playoff game against Apex Friendship. In the trenches, Coe had 22 tackles and one sack.

Pinecrest kicking specialist Jeff Yurk was named all-conference for his abilities at getting the ball between the uprights this season. Yurk had four field goals this season and connected on 20 point-after-touchdown attempts.

Richmond receiver Tremel Jones was named the conference’s offensive player of the year and Jack Britt’s Brian Randolph was named coach of the year.

Dorsett led the Yadkin Valley Conference in touchdowns scored by a wide margin as a junior for the Mustangs. He shared the conference player of the year honors with North Rowan’s Tsion Delaney and North Stanly’s Cooper Hogan. North Moore’s Andrew Carrouth was named the conference’s coach of the year after helping direct the Mustangs to the playoff for the first time since 2016.

Dorsett was one of nine players for the Mustangs honored as all-conference. In his first season with North Moore, he accounted for 16 touchdowns scored, with 11 coming on the ground, three receiving, one on an interception return and one on a kickoff return. He also had a team-high two interceptions on defense.

A majority of Dorsett’s offensive numbers rushing the ball came in his record-setting game against Chatham Central to close out the regular season when he rushed for a state-record tying eight touchdowns with more than 360 yards on the ground.

Joining Dorsett on the offensive side of the ball on the all-conference team were linemen Timmy Freeman, Colin Dunlap and Isaiah Maness. Fellow running backs Isaiah Cassidy and Jaleak Horne were also selected. Cassidy rushed for four touchdowns and more than 350 yards in five games this season behind the trio of lineman, and Horne scored three touchdowns.

Quarterback Dakota Morgan was named to the honorable mention squad.

On defense, the Mustangs were represented on the team by linebacker Trevor Brady, with a team-high 56 tackles, and Javory Wall in the secondary with 19 tackles.

Leading the team with points accounted for and always a threat with the ball in his hands, Jones was a driving force in all three phases for Union Pines this season.

In earning conference special teams player of the year, Jones had one punt returned for a touchdown, a 54-yard return against Western Harnett. He also scored two rushing touchdowns in that season-ending win as well as reeling in a touchdown reception. Jones scored six touchdowns this season, tied for the team lead this season.

The Vikings’ defense was represented on the all-conference team by senior linebacker Josh Birky and senior defensive back Josh Eberhart. Birky led the Vikings with 48 total tackles and added 16 tackles for loss this season. Eberhart was third on the team with 37 total tackles and also had two interceptions and two fumble recoveries, and scored two defensive touchdowns this season.