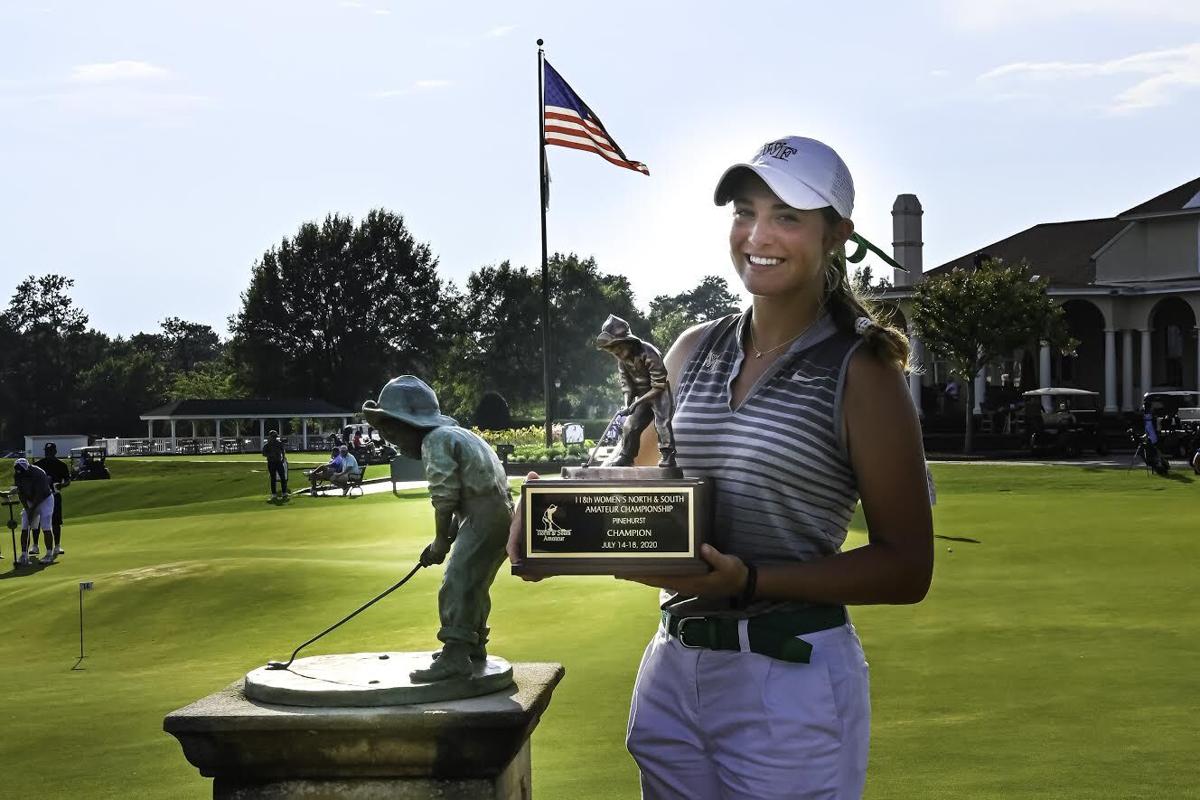 Rachel Kuehn with the Putter Trophy after winning the 118th Women's North & South Amateur at Pinehurst on Saturday. 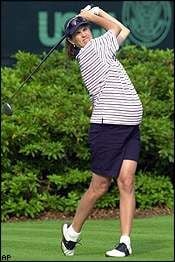 Brenda Corrie Kuehn was eight months pregnant with daughter, Rachel, while playing in the 2001 U.S. Women's Open at Pine Needles in Southern Pines. 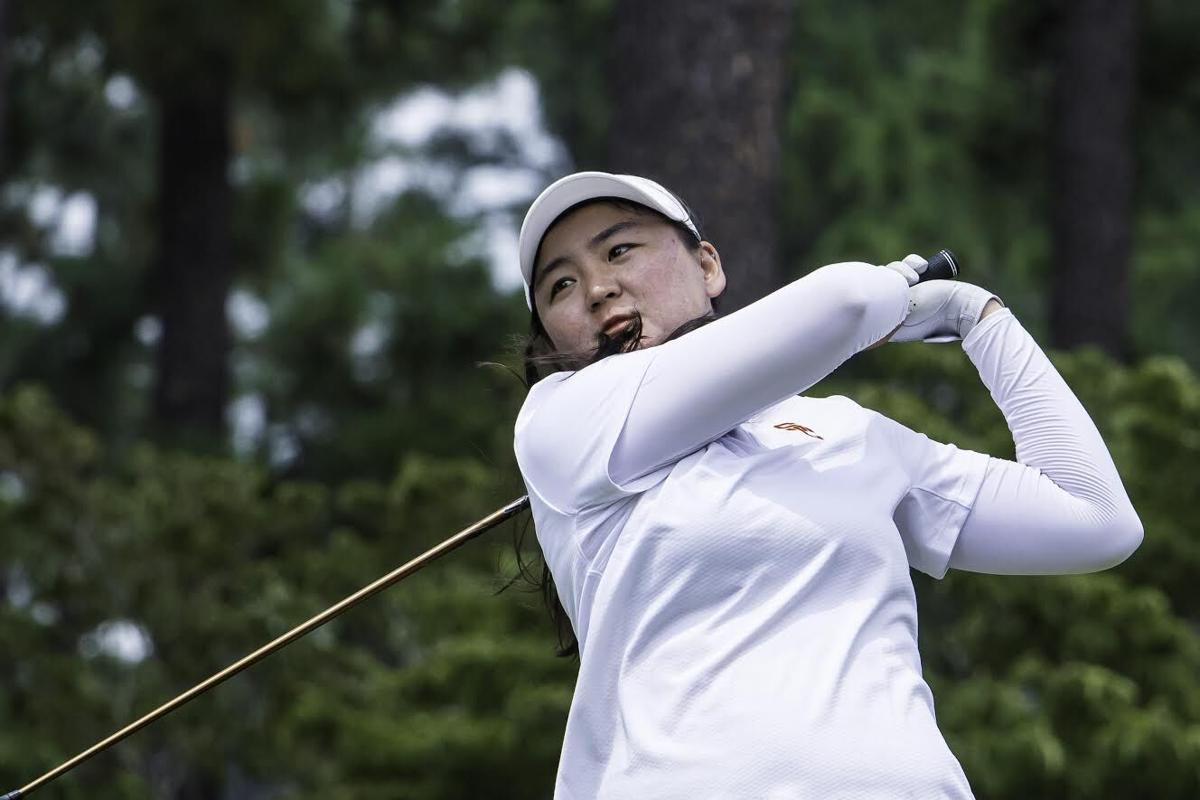 Allisen Corpuz, who plays at Southern Cal, was runner up. 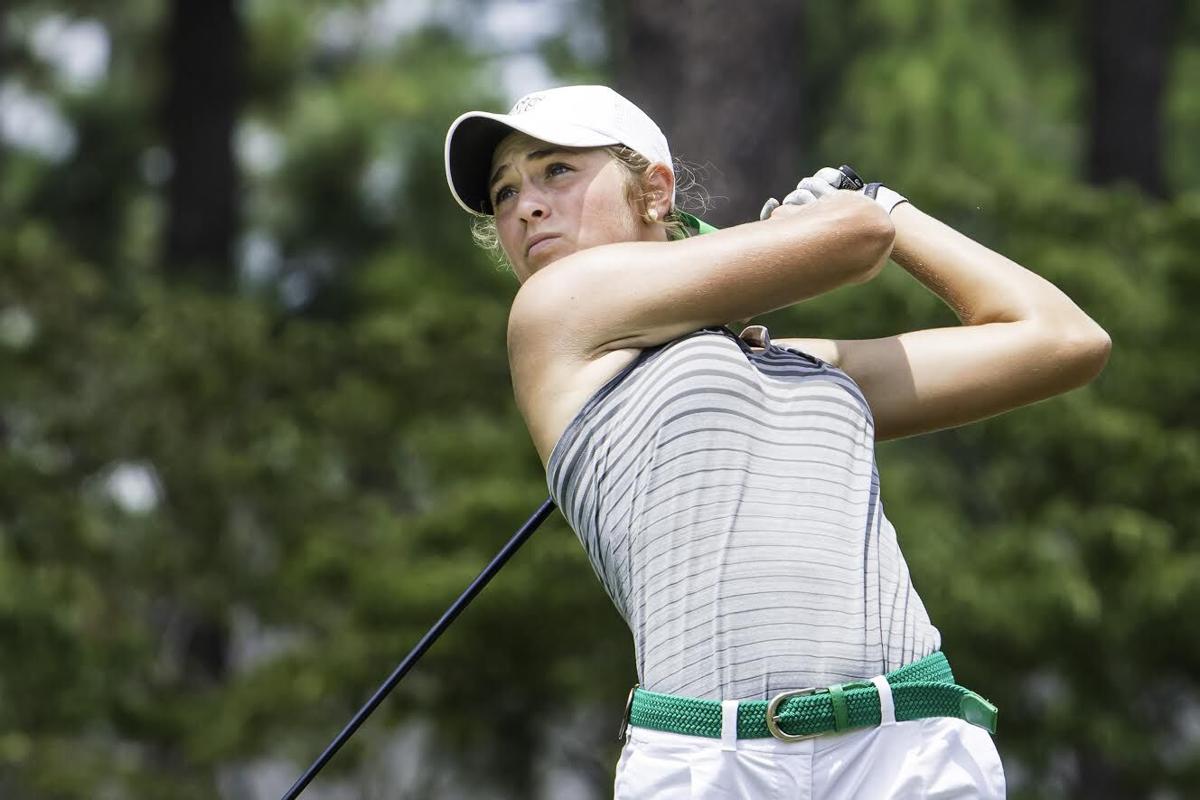 Rachel Kuehn won All-American honors as a freshman at Wake Forest this year. 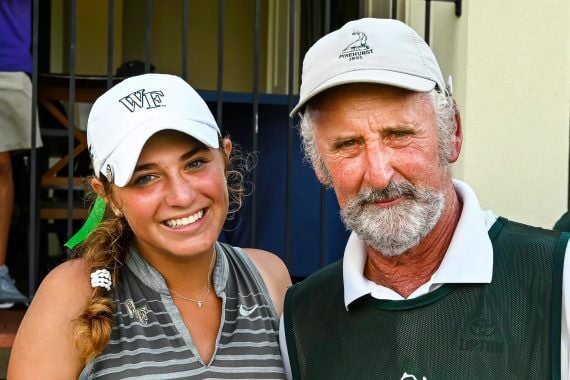 Rachel Kuehn, who won the 118th Women’s North & South Amateur at Pinehurst on Saturday, was involved in championship golf in the Sandhills before she was even born — literally.

Her mom, Brenda Corrie Kuehn, played in the 2001 U.S. Women’s Open at Pine Needles in Southern Pines when she was eight months pregnant with Rachel. She has now one-upped her mom by winning one of the nation’s most prestigious and long-running amateur tournaments.

A par on the first playoff hole – the par-4 1st – gave Kuehn the North & South title and Putter Boy trophy 25 years after her mother, former Wake Forest Hall of Famer, finished just short of the championship in the 1995 event.

“I joke with my mom because she finished (short), and has been holding that over my head,” said Kuehn with a laugh.  “I’m glad I could top her a little bit, but to add my name to the list of winners here is an unbelievable feeling.”

Kuehn followed in her mom’s footsteps attending Wake Forest, where she earned All-American honors last year as a freshman.

“I’m so proud of her play,” said Brenda Corrie Kuehn, who competed in 16 U.S. Amateurs and nine U.S. Opens. “She just never quits. She has a fire in her belly that never ends and you can never count her out because she’ll fight to the last drop,”

Even with her vast golfing experience, Brenda allowed Rachel and her veteran Pinehurst caddie Keith Silva handle matters on the course. Silva was on the bag at Pinehurst last year for William Holcomb V’s run to the U.S. Amateur semifinal and two weeks ago as Holcomb finished as runner-up in the North & South.

“We talked about things that were not golf. This was about (Rachel) and her caddie,” said Brenda. “The two of them made a great team.”

It was only fitting that an extra hole was required Saturday afternoon to decide the 118th Women’s North & South Amateur at Pinehurst No. 2.

With an 80-minute rain delay, Saturday’s play extended nearly 11 hours from the time Corpuz first teed off at 7 a.m.

While Kuehn had to play five fewer holes to reach the final, the tight competition combined with North Carolina Sandhills summer time weather extended the day.

“The Pinehurst heat and more than 36 holes definitely makes it a game of endurance, especially when you’re playing two matches in a day,” said Kuehn, won the prestigious ANNIKA Invitational last September in her first collegiate start.

Twice before Saturday’s weather delay, Kuehn took two-hole leads only to see Corpuz pull square after 11.  After her 21-hole outing in the morning, Corpuz bogeyed the opening two holes of the final round before making five-straight pars – the third of which leveled the match through five.

Kuehn went back in front with a par on the long par-4 eighth; then the Asheville native rolled in a 10-footer on the par-3 ninth for the first birdie by either player of the afternoon.

However, the Wake Forest sophomore left her next two tee shots in the right native area and lost the lead as Corpuz made two straight pars.  On the par-4 12th, Kuehn again left her drive in the right side natural area, but hit the green with her second shot to match Corpuz’ par.

As the golfers approached the 13th tee just after 3 p.m., play was halted as thunderstorms moved through the Sandhills region.

Neither Kuehn nor Corpuz appeared to be affected by the delay as both hit the fairway, then took aim at the elevated green with their second shots on the par-4 13th.  However, Corpuz missed a 3-footer for par to drop the hole.

The Southern Cal senior rallied and closed the round with five straight pars, including a long two-putt on 17.  Kuehn just missed her par putt on the hole and the competitors stepped to the 18th tee all square.  Each hit fairway, green and two-putted to send the match to the playoff.

Corpuz’ drive on her 40th hole of the day found the left native area and her footing was unsure as the native of Kapolei, Hawaii, set up for her second shot.  Corpuz’ hybrid bounced off the back of the green; then her chip was short and rolled off the slope.

Kuehn then two-putted from the front fringe to secure the title.

The delay might have come at an opportune time for Kuehn.

“I actually wasn’t hitting the ball great going into the rain delay, so it gave me a chance to regroup and it kind of turned an 18-hole final match into a six-hole final match.”

Corpuz, the 2019 North & South medalist who advanced to the quarterfinals of the event in the last two years, noted that the delay was “a little annoying to take a break, but it happens and you have to accept it and keep playing.”

Both Corpuz and Kuehn entered the Women’s North & South Amateur as qualifiers for the U.S. Women’s Amateur, which will be played Aug. 3-9 at Woodmont Country Club in Maryland.

Corpuz advanced to the final after making a 12-foot birdie putt on the 21st hole Saturday morning.  After she and Ivy Shepherd both saved par from the native area on the first two playoff holes, Corpuz hit a wedge from 105 yards to 12 feet to set up the deciding birdie on the short par-4 third hole.

Shepherd, the North & South medalist, made the turn Saturday morning 1-up, but the Corpuz tied the match three times on the back nine – the last with short par putt on the par-three 17th.

“I wasn’t hitting the ball really well today; I was just trying to keep it in play and grind it out,” said Shepherd, a sophomore at Clemson. “I just missed a few important putts coming down the road. When it went to extra holes, I missed three really good birdie looks back-to-back-to-back.”

For her second straight match, Kuehn rallied to advance to the North & South final.  On Friday, she trailed Rachel Heck in her quarterfinal by two with four holes to play before squaring the match on the 18th and winning on the 20th hole.  On Saturday morning, Kuehn fell behind by two through five holes to Michigan State’s Haylin Harris before Kuehn won three of the next five.

Kuehn birdied the par-5 eighth and par-3 ninth to take the lead, then won the 12th and 14th to build a three-hole lead with three to play.  Harris conceded after Kuehn knocked her approach on the par-four 16th tight.

The Women’s North & South has drawn the top amateur women from around the country and is the longest consecutively running women’s amateur championship in the country. Its first championship was played in 1903.