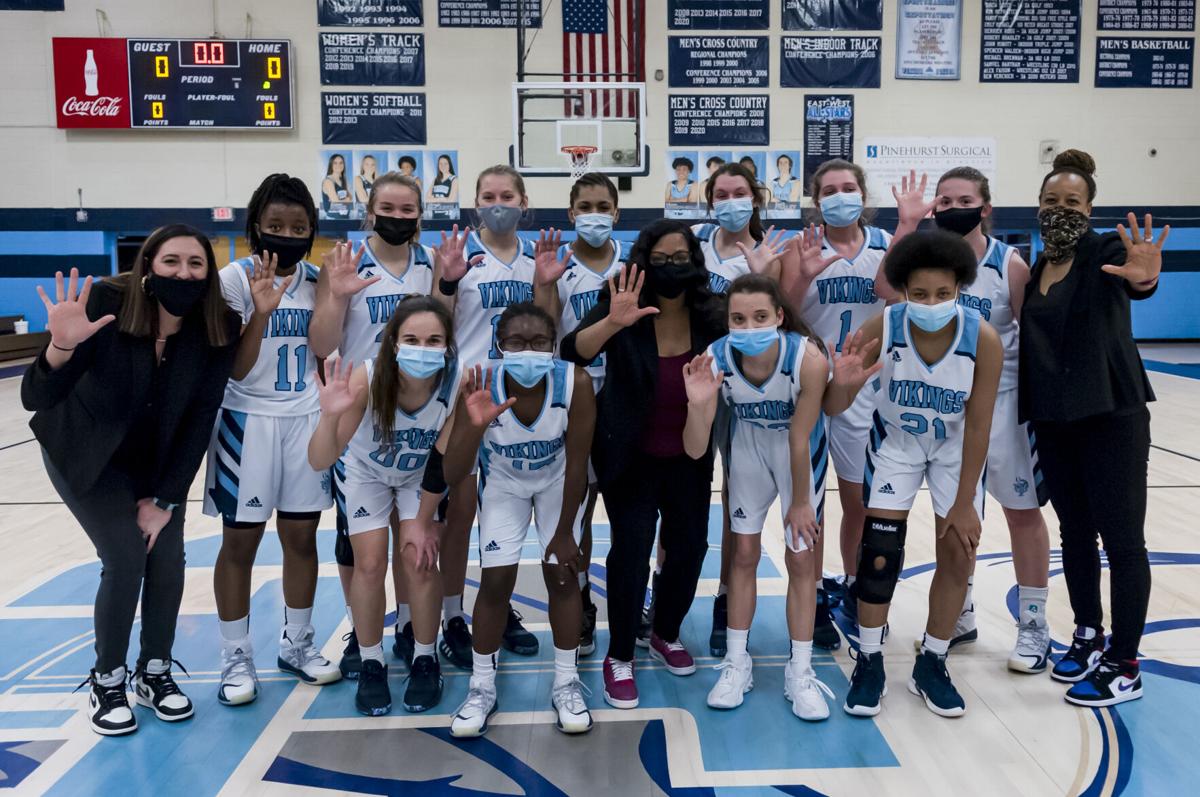 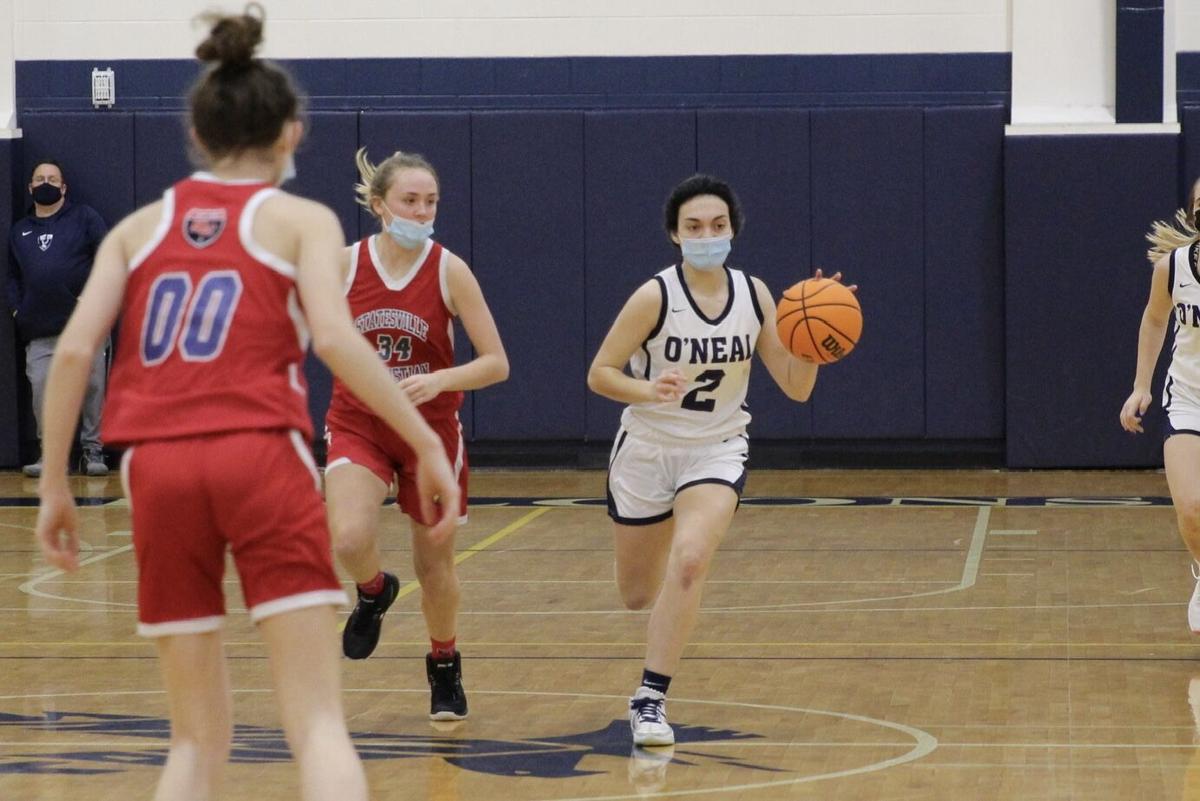 O'Neal's Caelan McHarney dribbles up the court against Statesville Christian on Friday in the second round of the state playoffs. 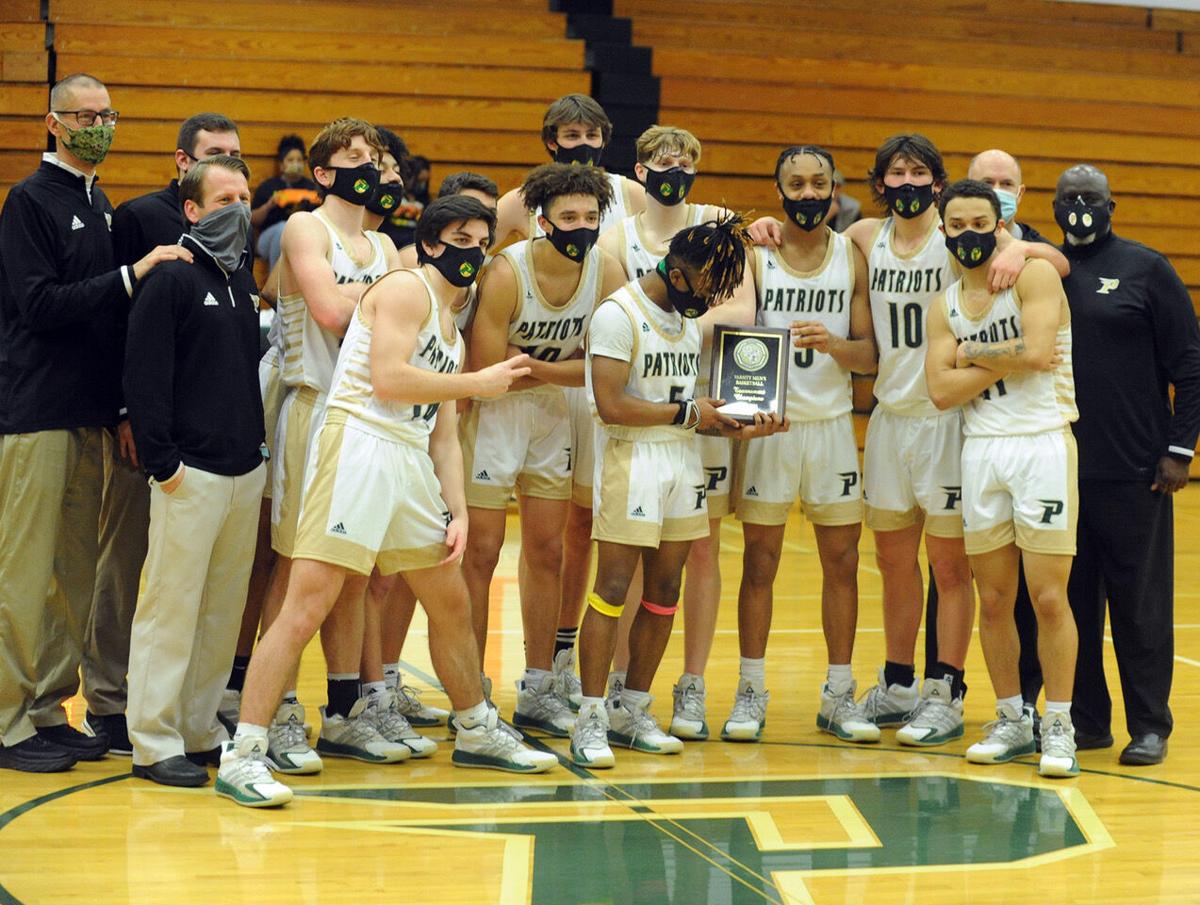 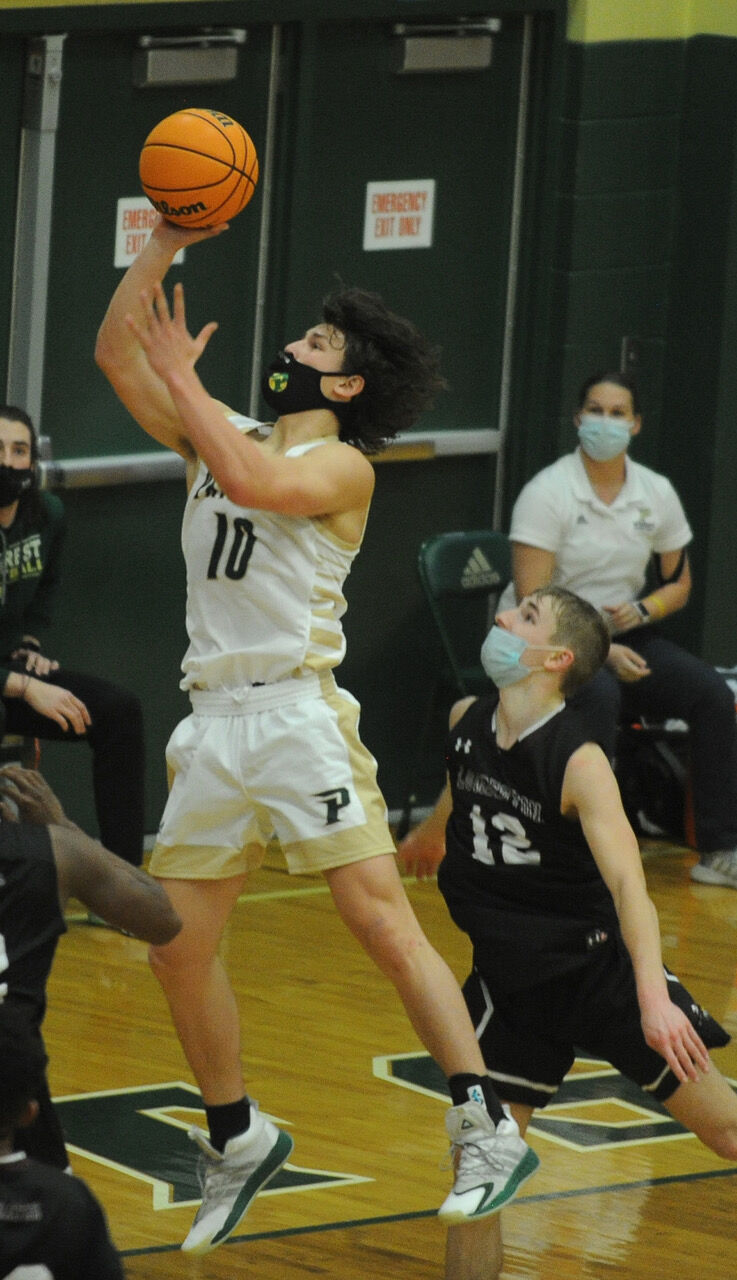 Pinecrest's Colby Wallace goes up for a bucket in the paint against Lumberton Friday in the Sandhills Athletic Conference tournament championship game. 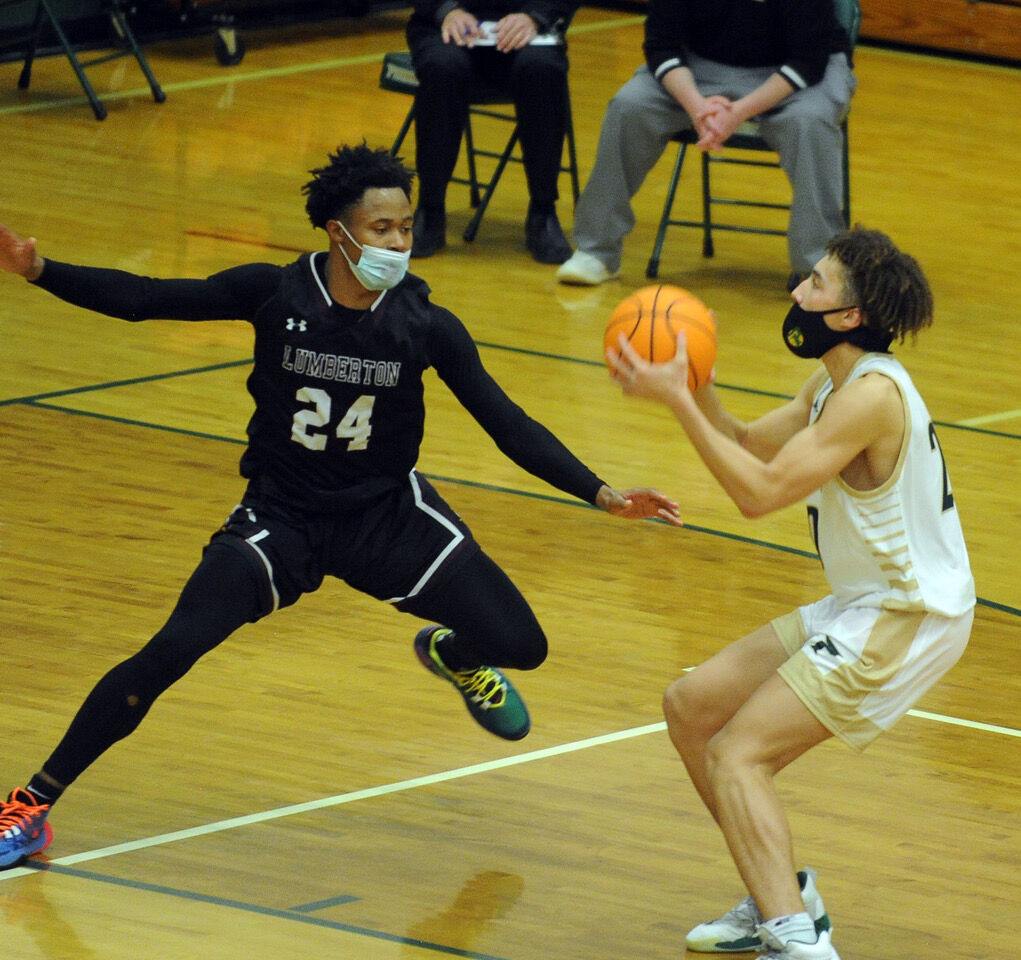 Even with all the changes that has turned the world upside down in the last year, one constant from last February to this February is the Pinecrest boys basketball team finding their stride at the right part of the season.

For the second year in a row, the Patriots claimed both the regular season and tournament titles in the Sandhills Athletic Conference, defeating Lumberton at home on Friday by running away in the final three quarters of the 67-52 victory as the Patriots stock is trending upward on a 10-game winning streak.

“You want to peak at the right time and that’s been a big part of the last two years,” Pinecrest coach Ben Snyder said.

“We just said it up there. We were solid, just all game with the ball knowing when to attack, when to run, when to back off.”

The top-seeded Patriots came into the game without a day of practice on Thursday as Moore County Schools shut down all afterschool activities due to the threat of ice. The last time out, Pinecrest let a 10-point lead in the fourth quarter slip away before pulling out an overtime win over Seventy-First on Wednesday, and the team wanted to get back in the right frame of mind against the Pirates.

“We’re going on a road. Coach says you want to have everything clicking at a good time, and I feel like we are getting better every time we get out here,” senior guard Ian Blue said. Blue finished with 22 points to lead all scorers.

With a defense limiting Lumberton to a poor shooting performance, and an offense staying disciplined against a stout Pirate defense, Pinecrest took the lead for good with six minutes to go in the first quarter and never looked back. Blue and fellow senior Bradlee Haskell combined to score 17 of the 22 points in the first quarter. Seven players scored in the second quarter for Pinecrest as the lead grew to 42-28 at halftime.

With a sizable lead, Pinecrest meticulously ran its offensive sets due to Lumberton’s defense limiting driving lanes and cuts.

“They just make every catch, every drive, everything so difficult,” Snyder said. “We knew that once the ball got into the halfcourt that it would be more of a grind it out type of game.”

Lumberton scored four points in the third quarter to Pinecrest’s seven. It wasn’t until midway in the fourth that Lumberton came out looking to trap and force the issue.

“We execute the plays, if they jump, the slip is open for the layup, and if they take away the slip then the 3 was open. They had to choose,” Haskell said.

“We just made them earn things,” Haskell said of the team’s defensive effort.

Pinecrest has the top seed out of the Sandhills Athletic Conference and will host Southeast Raleigh in the first round of the state playoffs on Tuesday.

The Union Pines girls basketball team clinched its fifth straight conference title with a 65-30 win at home over Western Harnett on Friday.

Union Pines scored 24 points in the first quarter and 17 points in the second quarter of the blowout win to lead 41-14 at halftime.

The Vikings claimed the top seed out of the Tri-County Conference and will host Person in the first round on Tuesday.

In the girls championship game, Pinecrest lost 64-24 on the road to Jack Britt.

Pinecrest was limited on offense, scoring no more than eight points in any quarter during the defeat.

The Pinecrest girls have secured the No. 2 seed out of the conference and hosts South View in the first round of the state playoffs.

O’Neal into NCISAA Girls Third Round

After Statesville Christian mounted a comeback in the third quarter to tie the game entering the final eight minutes, The O’Neal School’s girls basketball team leaned on the playmaking of its standout players on Friday.

Holding the Lions to seven points and closing the game on a late run, the Falcons claimed a 47-42 win at home in the second round of the N.C. Independent School Athletic Association’s 2A state playoffs.

O’Neal used an 8-4 run over the final 3 ½ minutes of the ballgame after Statesville Christian cut the Falcons’ lead to 39-38.

Junior Caelan McHarney hit a layup and senior Kayla Jankins drained a 3-pointer to create separation as the team made late free throws to lock in the win.

McHarney led the team with 14 points, Jenkins had 12 points and eighth-grader Ashanti Fox had 11 points.

Jenkins was saddled with foul trouble, but Brase saw the duo of McHarney and Fox deliver late in the game.

“Those two are a dynamic duo and they complement each other real well,” Brase said. “When they play together, I’d argue they are the best guard duo in the state because they are very complementary to each other and it's fun to watch.”

A late second-quarter run gave O’Neal a nine-point halftime lead it pushed out to 32-20 early in the third quarter.

Statesville Christian rallied to tie the game at 35 heading into the fourth. The Lions were led in scoring by Ansleigh Sherrill with 15 points.

O’Neal also locked in defensively in the post against Stateville Christian’s 6-foot-2 center Grace Cole, by using the trio of Kayla Brown, Brooklyn Adams and Talayah Baldwin to slow her down to nine points.

“Those three all year just do what we ask,” Brase said. “We asked them to front, we asked them to do weird things, and they just battled. We work out in the performance room a couple times a week and that paid dividends. They could explode up and they were stronger, even though their stature was way smaller.”

O’Neal advanced to play at The Burlington School in the third round on Saturday, and the season ended for the Falcons in a 48-36 defeat.