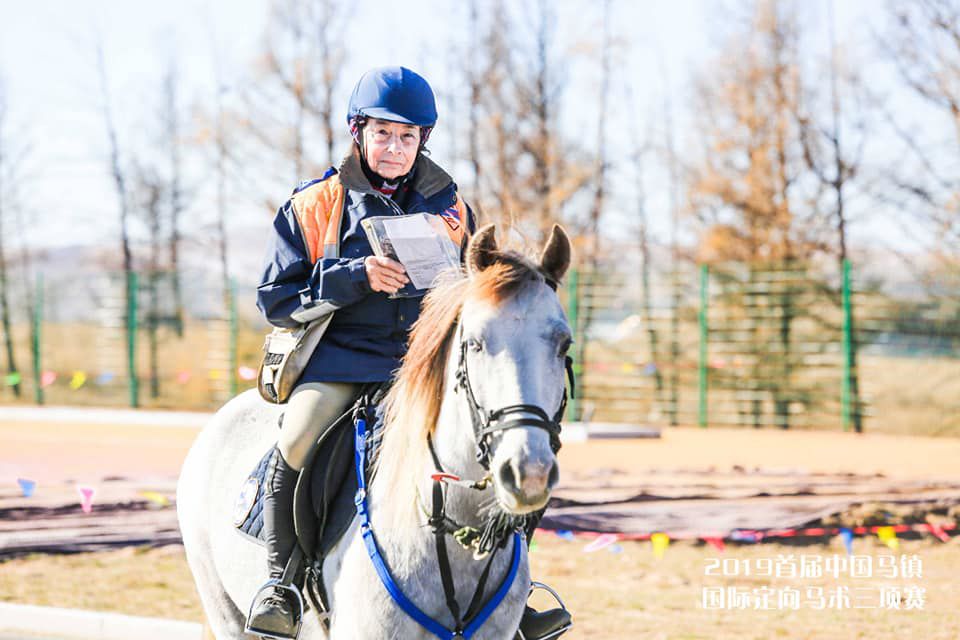 Mary Harcourt rode a borrowed horse that she nicknamed Paintbrush in the TREC China International event in late October. 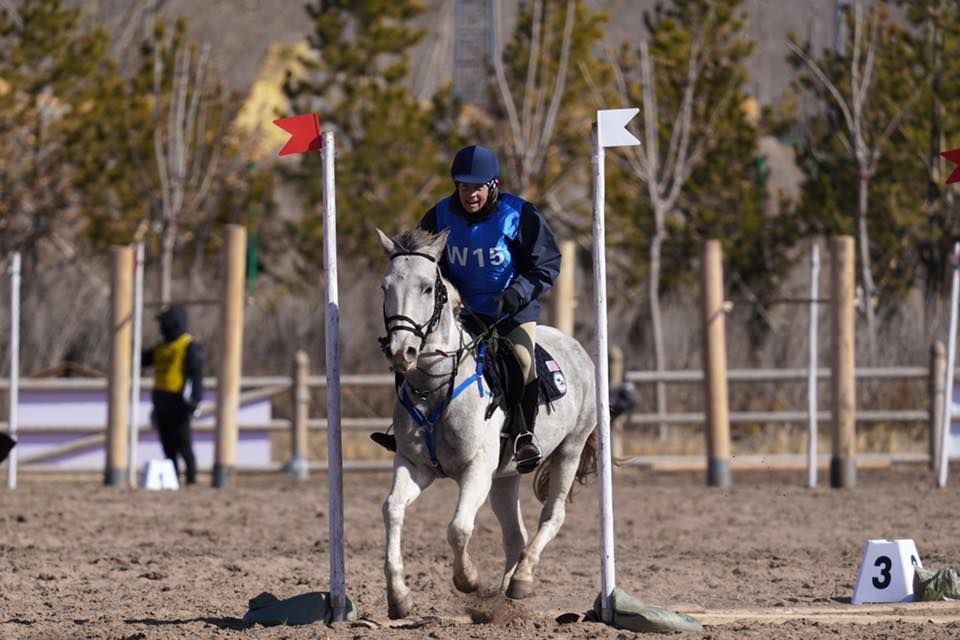 Aberdeen equestrian Mary Harcourt traveled to northern China to ride in a TREC competition this fall.

Mary Harcourt has never been afraid to blaze a new trail.

In the middle of a 25-mile ride through the Eurasian steppe, on a horse of dubious training she’d nicknamed “Paintbrush,” and guided only by a compass and a sketch she’d made from a black-and-white satellite photo, she was still within her comfort zone.

But in 38-degree weather, considering how far to go after the next turn at a dry river bed, she could just see the edge.

Back home in Aberdeen, Harcourt described the moment: “To ride along and be worried about your map and then all of a sudden say: I’m riding in China!”

Harcourt’s journey in late October to Fengning, about 120 miles north of Beijing, really started more than 20 years ago when she was director of the equestrian program at Averett University in Virginia. Thanks to the program’s affiliation with the British Horse Society, she found herself in an international contingent working to plant the seeds of TREC — essentially, sanctioned horse trekking — outside of France.

“They called me and said the French have this new sport and they want to hold a World Championship, but they can’t call it that without the British and the Americans coming,” Harcourt said. “So we all trooped over to France. The idea was to encourage people to get out of the ring, and the French had developed it for about 15 or 20 years at that point.”

TREC combines three phases to test competitors’ aptitude for long-distance trail riding. In an arena, competitors work over a series of obstacles including small jumps, ditches, water, and drop, to demonstrate their ability to navigate natural terrain. In the “control of paces” phase, riders exhibit precise control over their horses’ gaits by walking quickly down a corridor and then maintaining a controlled canter back without breaking stride.

But the main event is mounted orienteering, where courses can range from 6 miles at the novice level to 30 miles in international-level TREC events. Internationally, the sport is sanctioned by the FITE, or international federation for equestrian tourism. More than 25 countries now have affiliates — including, lately, China.

Between ancient mythology and military history that spans the dynasties, horses loom large in the Chinese consciousness — especially considering that more than half of its 1.4 billion residents live in densely-packed cities.

In the last few years, the country has begun hosting international TREC events. More than just competition, the events showcase for foreigners the level of effort China’s Horse Culture, Sports and Tourism Institute has put forward to preserve its historic equestrian culture.

The TREC China International Championship was held on Oct. 26-27 at China Horse Town, or what Harcourt described as a horse person’s Disneyland. Harcourt was one of three American riders to compete, along with representatives from France, Ireland, Austria, Singapore, Russia.

China Horse Town comprises a racetrack, cross country course, show arenas, barns, a Hall of Breeds, an amphitheater for theatrical riding performances and a museum dedicated to the horse in China. It’s close enough to Beijing and other northern coastal cities for weekend trips and aimed at members of China’s burgeoning middle class.

“I did not realize how much the Chinese really revered horses, but it began to dawn on me why this is important to the Chinese and to the Communist Party, for economic reasons along with everything else,” said Harcourt.

Once the international riders arrived in China, staff of the horse tourism institute picked them up in Beijing and drove them the four hours to Fengning. The first order of business was stopping at one of many small local farms and picking up the horses that would be their competition mounts.

Although China Horse Town draws a million tourists over the summer months, by late October high temperatures might reach 40 degrees Fahrenheit on a nice day, and the locals are beginning to hunker down for the winter.

“There are these little tiny villages of Chinese: very humble, very hospitable,” said Harcourt. “The Chinese are beginning to come up and go trail riding on this beautiful terrain and these people have developed it into an industry. Otherwise they are dirt poor and their horsemanship is very bare bones.

“I don’t fault people for the way they have to live … it’s hard under the conditions they’re under to do the kind of horsemanship you would find here.”

Outside of the main horse town complex, there are no luxurious barns with well-appointed stalls. Fenced paddocks are even few and far between. Local farmers typically keep horses tethered to a line and it’s the stores of hay and feed that are kept fenced off.

“They tie them up so they can’t get into their stores, because if they eat everything all at one time they won’t have anything in January and February,” said Harcourt, though she eventually deduced from the tracking collar on a single horse that they’re set free on the steppe to graze periodically.

“Obviously they must turn them loose, track him and he’s the one most of them follow and that’s how they find their horses. There are no pastures. There are corrals in the village, and that’s all. They were doing the best they could. We saw a couple of horses with blankets on so they must have been really special to the family … but other than that, if it came in by a truck, they rode it.”

With all of that in mind, it was with some trepidation that Harcourt and the other competitors drew horses by number from a hat. Once assigned horses, they all mounted and set off for China Horse Town, about six miles away, at a dead gallop by way of familiarization.

“I had no control after a while and I just yelled to my friend ‘Don’t leave me,” because they just galloped. That is evidently what the Chinese who came out of Beijing think of: old cowboy movies,” said Harcourt.

“They weren’t bad horses. There was everything you could haul in on a truck, and some things you rode. We saw some really nice Quarter Horse types, a couple we thought were probably Thoroughbreds, lots of ponies. Mine would gait.”

Competitors had a few hours to put their new mounts through their paces before contesting the obstacle and control of paces phases that afternoon. Fortunately, Harcourt found that her horse suited her.

“We worked with them in the ring for our obstacles and they knew some stuff but they didn’t know a lot,” she said. “My little fellow would step over a low log, but he didn’t know how to jump. On the trail he was steady and he went where I wanted him to, wasn’t upset about being alone, was kind of glad I didn’t ask him to run full-tilt anymore. If I’d had a week I could have taught him a lot more, but I had half an afternoon.”

The next day, Harcourt spent five hours in the saddle negotiating the orienteering course. For her part, she was happy to make it through the finish flags before dark. At 73, Harcourt was the oldest rider in the competition.

“The Chinese interviewed me on TV and asked me two questions: did your family and friends tell you not to come — because you’re so old, they were implying,” she said. “My doctor keeps telling me, just keep riding.”

After the TREC event, competitors played tourist. At China Horse Town’s museum, exhibitions ranged from stirrup irons and swords from 5,000-year-old tombs to a display of a show horse in a blanket and bell boots and posters of various international riding disciplines. The museum also showed films from the 1920s and 1930s scavenged from Russian archives by the head of China’s Horse Culture, Sports and Tourism Institute.

“These videos showed the Chinese doing events, racing, there were women drill teams, just all kinds of interesting things showing how the Chinese participated and enjoyed horses. Then in came Mao and the Communists and it was all wiped away,” said Harcourt.

Riding back to return their rented horses, the international TREC contingent made a detour through Inner Mongolia. Even after two days of competition and with so much to see back in Beijing, and in the face of 50 mile per hour wind gusts, there’s no such thing as too much saddle time.

“We were all riding in the bitter cold for fun and we did another 20-some kilometers. It was so cold I had on several sweaters and I even wore my protective vest, but I had a nice little horse and his gaits were easy and he wasn’t hard to control,” said Harcourt.