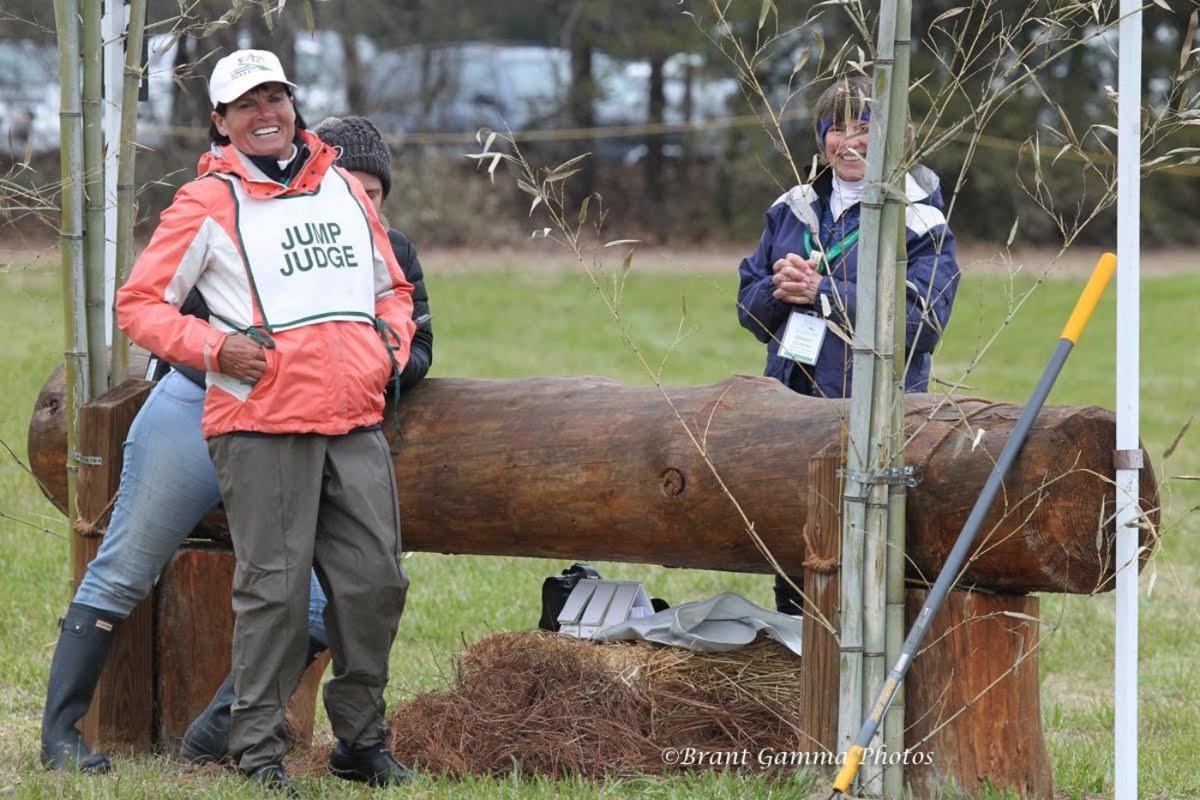 As a Carolina Horse Park volunteer, Vicki Reynolds has been everything from a cross country jump judge to stabling manager for the Carolina International on the way to serving more hours than any other volunteer in 2019. 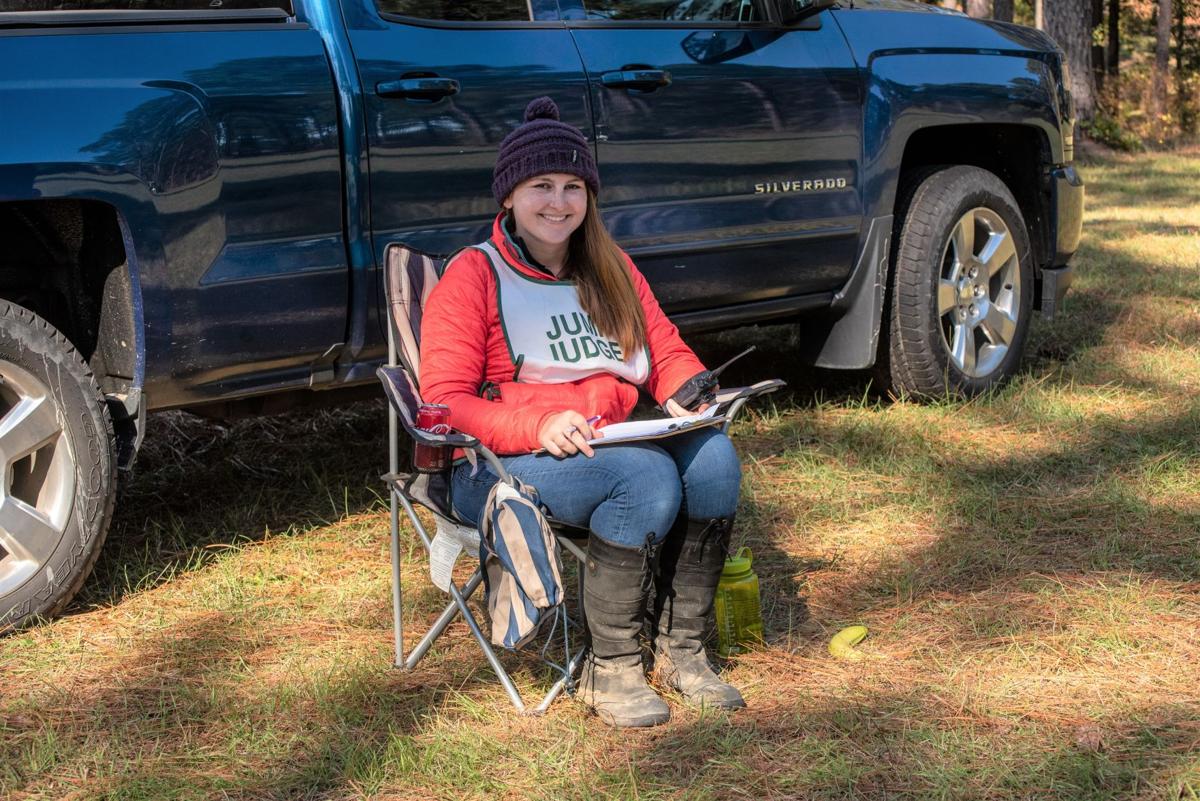 Brooke Hartson notes competitors' efforts over an obstacle from her post on the cross country course at the November War Horse Eventing Championship at the Carolina Horse Park. 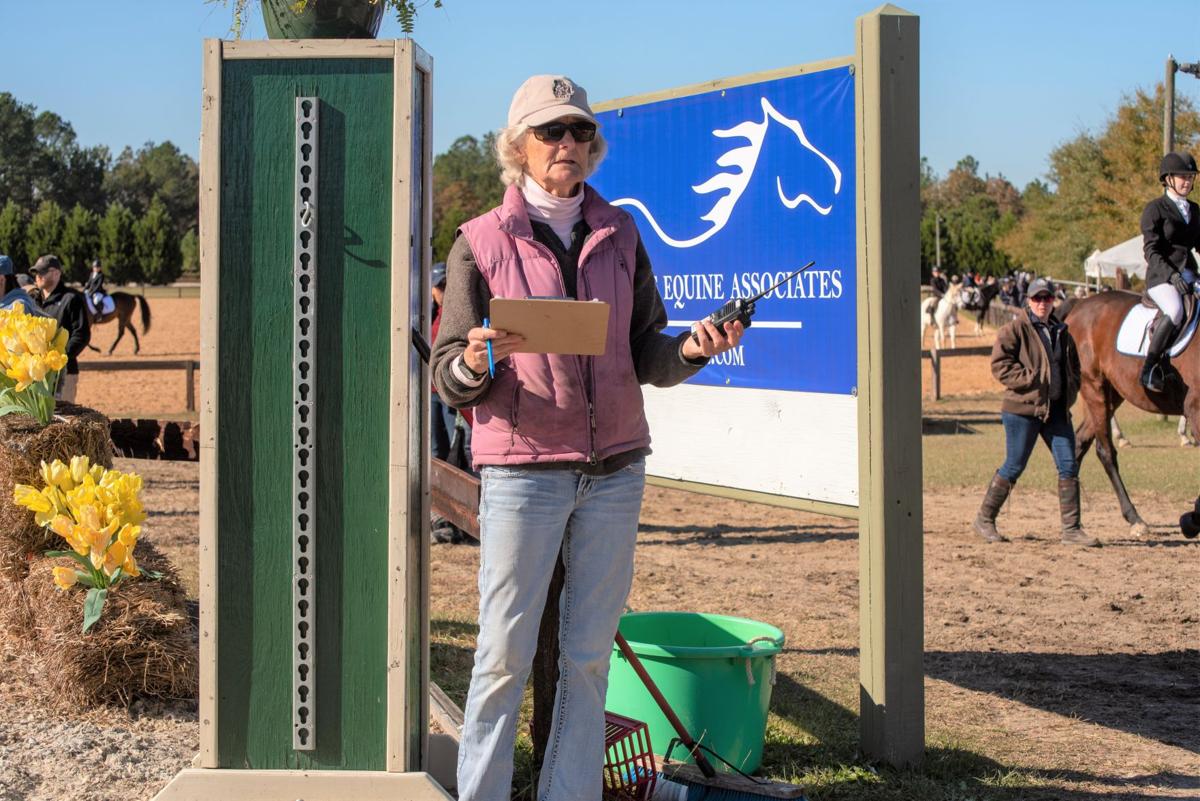 Whether it’s an informal schooling show or an extensively orchestrated multi-day competition, at the Carolina Horse Park there’s a lot that goes on behind the scenes of every event.

Before the starting bells ring and after the final awards have been handed out, there are jump courses to set and decorate, supplies to organize, and grounds to clean up at the end. Then running the competitions themselves demands exponentially greater manpower than the park’s usual staff can supply.

Dozens of jump judges are stationed around the cross country course to record how each competitor negotiates the obstacles, dressage scribes record judges’ scores and comments, and stewards usher riders into the competition arenas on schedule. These jobs and others fall to the park’s corps of tireless volunteers.

In 2019, 255 volunteers devoted more than 7,000 hours to the Carolina Horse Park — averaging more than 27 hours each. Liz McNeill, the horse park’s volunteer coordinator, said that there were volunteers on the ground on 80 days throughout the year.

“Volunteers are the most valuable resource we have, and our volunteers are the best around,” said McNeill. “No matter the event, no matter the weather, they are out in force and ready to make show day a special day for everyone involved. We look forward to a great 2020 season and welcome any and all to come and volunteer.”

At the end of the year, the park recognized its volunteer force with a lunch at Southern Pines Equine Associates, which sponsors the park’s annual War Horse series of six schooling horse trials. Vicki Reynolds, Joan Harper, Randy Crosier, Laurie Rose, Bill Watson, Andrea Wookey, Lei Cluff-Ryan, Janeen Roehr, Angelo Lobsinger and Denise Jones were recognized as the 10 volunteers with the greatest number of hours in 2019. Kara Hiendlmayr was the most active volunteer to get involved for the first time last year.

Logging the greatest number of volunteer hours with more than 390 in 2019, Vicki Reynolds’ flagship role is stabling manager for the Carolina International CCI and Horse Trial at the end of March. One of the premier spring eventing competitions, the Carolina International draws enough competitors that the horse park installs temporary stabling to supplement its eight permanent barns.

For Reynolds, overseeing that process — including addition of electric and water lines — can be a 24-hour job, especially as competitors are arriving from up and down the East Coast at all hours.

“I have to sleep out there, because stuff happens,” she said. “At two in the morning I hear horses clomping by the window. I park so that I can hear trailers coming in.”

Fortunately she’s comfortable camping in her horse trailer, though sometimes she’ll borrow a motor home for the occasion.

“I’ll have a little generator going, a radio and a little fan and some coffee. I’ve got it made,” said Reynolds. “There is so much stuff to get done, and it does get done. It can create a lot of tension, so you have to try to make it fun.”

Reynolds, a retired high school math teacher, grew up riding in Vermont. She took a long hiatus to focus on motocross and rowing, but eventually found her way back to horses and got involved with the Carolina Horse Park in the mid-2000s.

“Then my horse got hurt and had problems, and we’re so lucky to have the horse park. So I would start volunteering because I couldn’t compete,” she said. “I always tell them: put me down for whatever job you need done and if you need to change it, change it.”

“I got to where I really enjoyed working with Marc, and you learn so much: why he puts fences where he does, and the distances, and the type of jumps. It’s fascinating,” Reynolds said.

“Even jump judging on cross country, you get to see one horse after another and it’s amazing because you’ll see it done well and you’ll see it done not so well. It doesn’t matter what you do volunteering, you always learn something from it. “

Reynolds can always be relied upon to showing newcomers the ropes. Most volunteer positions require little to no horse experience, and competitors’ uninitiated family members sometimes find themselves ferrying score sheets from the judges’ stands to the show office throughout the day or bringing a steady stream of snacks to judges on the cross country course.

“Most people are very, very good. One girl came and she stayed with me to learn the ring steward’s job and she was quick. I told the people running the event that she was good to go,” said Reynolds, who as a competitor herself has also mastered the diplomacy needed to keep a show moving on schedule through warm up ring mishaps and some riders’ frayed nerves.

For her dedication to the horse park and willingness to help wherever needed, Reynolds was also named the U.S. Eventing Association’s Volunteer of the Year in 2018.

Now that she’s returned to showing with a new horse, Reynolds has taken on the job of Carolina Horse Park’s unofficial stadium jump rehabilitator. This year, she spent hours — that weren’t counted in her final tally — repairing and repainting dozens of jump standards and filler boxes from the facility’s reject pile. Restoring jumps with decades of use to be fit for prime time challenged her ingenuity and creativity.

”I would go grab a bunch of standards that were broken, put them on the trailer, bring them home and repair them,” she said. “Some of the boxes were in bad shape, so I would take them home and instead of being two feet by six, I’d have to cut off the rotten places and it would turn out as an 18-inch box.

“Since I was competing, it was a way that I could give back to the horse park.”

For information about volunteer positions and incentives at the Carolina Horse Park, visit carolinahorsepark.com/support/volunteer or call McNeill at (910) 875-2074.