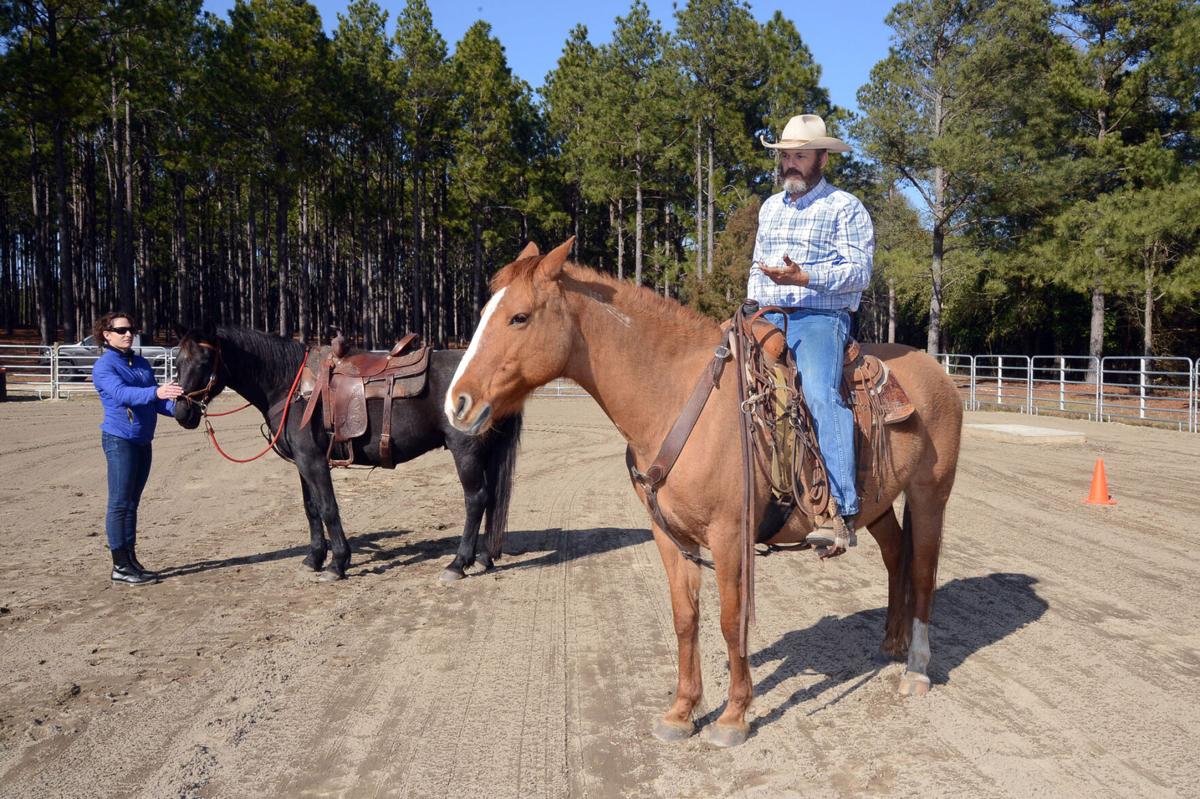 American Mustang School founder Justin Dunn, who advocates for training without the use of bits, whips or spurs, rides one of his formerly wild horses bridleless. Ted Fitzgerald/The Pilot

Last November The Washington Post Magazine featured an article on the plight of the American Mustang: seen by some as a symbol of the American frontier and by others as a parasitic drain on federal resources.

Justin Dunn sees them as something else entirely.

Dunn opened the American Mustang School in Aberdeen just over a year ago. The Navy veteran previously spent over a decade running a trail riding operation in a remote area of Colorado.

He brought nine horses to North Carolina, including five formerly wild Mustangs that he thinks have a unique ability to help heal traumatized and emotionally troubled humans. More than 50 veterans, including some service members still on active duty, have come through Dunn’s program so far.

Equine-assisted therapy isn’t new. Neither are equestrian programs for the benefit of individuals with physical or developmental disabilities.

But Dunn says that Mustangs offer a more sophisticated dimension of horse-human connection. Participants at the American Mustang School can make some of their most important breakthroughs without ever setting boot into a stirrup.

Dunn has trained hundreds of Mustangs both for others and for his own business. Over the years he’s found that he’s learned just as much about himself as he has about training horses.

“If I’m not in control of my thoughts and emotions, that horse is right there to call you on it,” he said.

As previously wild horses, Mustangs retain an undiluted instinct toward self-preservation.Their every sense is fine-tuned to pick up on any stimulus, no matter how small: a person’s shortness of breath, muscle tension, or irregularities in their stride.

Not unlike a psychologist, the horse is constantly taking notes.

“They have the innate ability to read a person’s inner emotion and understand on a much deeper level what that person really needs. When a person opens to presenting themselves to a Mustang, they get true feedback in a nanosecond,” Dunn said.

The American Mustang School’s program takes about 60 hours to complete. About half of that is intensive training over an average of two months, and the second half is a “maintenance” schedule.

“Horsemanship and the therapeutic aspect of what we’re teaching is just as effective away from the horse as it is with them. So what they learn they can implement away from here as well, because it’s in thoughts, emotions, attitude, action, presentation, what you expect,” Dunn said.

“So you can practice with a horse, but you can also practice with your wife or your children, your subordinates or your leadership. They’re all things that can be practiced and implemented.”

Most of the program participants so far have come to the school by word-of-mouth. Donations to the school have covered the hourly rate for about one-third of them, but Dunn said that as long as he can keep the program running no active or veteran service member will ever be turned away.

Groups like the Special Forces Association Chapter 62 in Southern Pines, as well as Hot Rods for Veterans in Aberdeen, have been among the program’s strongest supporters locally.

“We didn’t stand our program up in accordance with the funding; we stood it up to help people. It’s as affordable as we can make it,” said Dunn.

“We’re not going to decrease the level of care in accordance with what someone can fund. We’re going to provide the highest level of care, tailored to that individual.”

With 2020 bringing rising rates of suicide, divorce and alcoholism among service members, due in part to the pandemic, Dunn foresees higher demand for what his Mustangs provide. He dreams of eventually adding four or five staff members and running upwards of 35 sessions per week.

Steven Boutot is a 17-year Army veteran who served in the Special Forces. The American Mustang School is where he found a path away from the antidepressants and chronic pain medication he’d come to rely on after suffering service-related injuries.

“If you were to go to any psychological testing place for therapy, they call it cognitive behavioral therapy, and that’s what this is. It’s really a misnomer when you say ‘equine therapy,’ Boutot said.

“This is not just simply being with an animal and the animal helps calm you down. You’re learning how to center yourself to work with this horse. The horse is going to tell you you’re not ready, you’re over there, and you can’t make me do that because I’m where you should be.”

Boutot grew up around ranching, so he was initially willing to try an unconventional program. Where some service members may be apprehensive given the stigmas still surrounding formal behavioral health treatment, Boutot said that the American Mustang School offers another option.

“I’m at a point in my life now where I want to help people to not do what I did, to not be the person that I was, because it’s just unnecessary pain that you don’t have to go through,” he said. “Guys don’t know that there are alternative options; there are things out there that aren’t going to the psychologist and taking medicine.”

Dunn also shies away from selling his program as “therapy.” He compares those who suffer from post-traumatic stress to Mustangs that no one knows quite what to do with.

As of spring 2020, the Bureau of Land Management estimated that there are 95,000 wild Mustangs living on managed land in 10 western states.

That’s nearly four times the sustainable level, given the demands of other wildlife and privately-owned cattle.

But wild horses have no natural predators, so their numbers have gone up by about 7,000 each year, despite the removal of thousands of horses from the range. Some are placed with trainers or in sanctuaries, but many are left in holding pens.

Dunn hopes that his program, and others like it, can provide a better life for many of those horses — while simultaneously helping people, too.

“The horses that have come through my program for years, they weren’t broken but they got labeled that: untrainable, crazy, trash. They’re fine. They have some underlying issues that’ll arise every once in a while, but we all get that,” he said.

“We’re humans and we’re engaging in upgrading ourselves. We’re taking proactive steps in becoming better people. If that’s therapy, then label it that, but you don’t have to be broken to come to this gate and get an upgrade.”

For more information about The American Mustang School, visit justindunnhorsemanship.com.