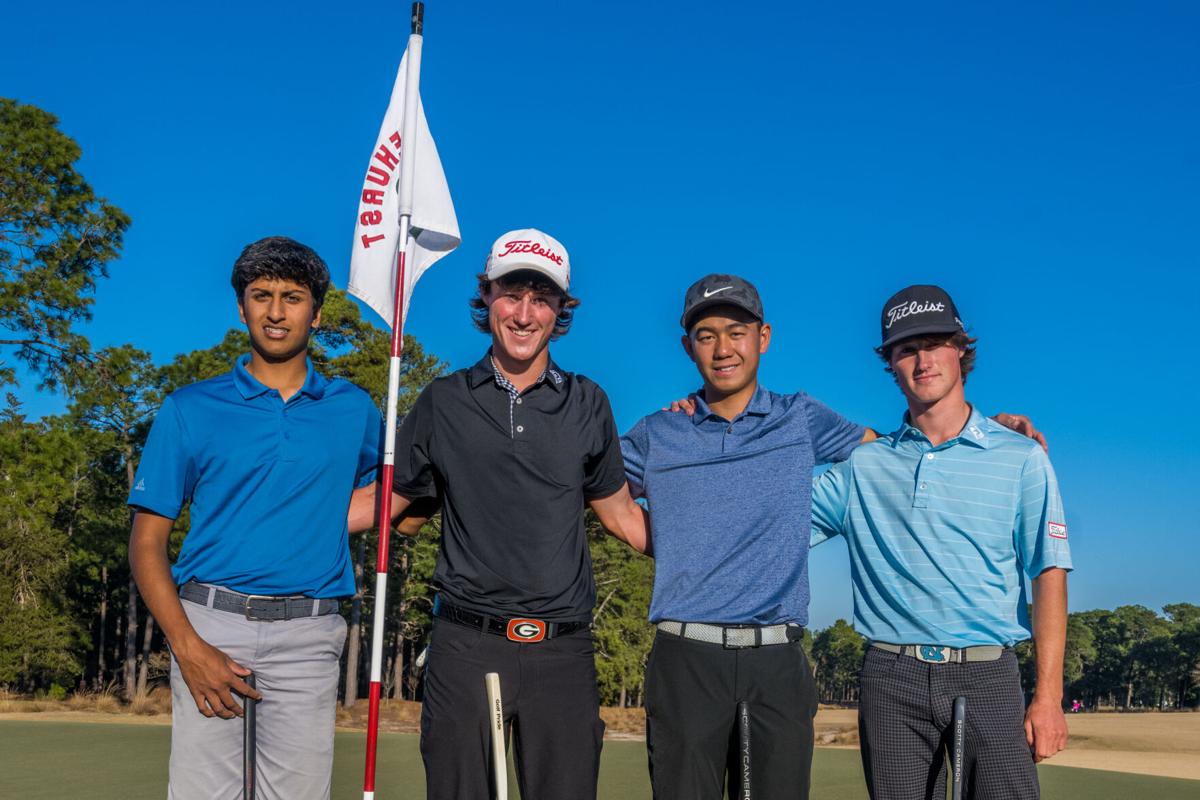 The competitors in the Royal Pine match play event sponsored by Junior Golf Live pose after their round on the 18th green of Pinehurst No. 2. From left, Deven Patel, Maxwell Ford, Kelly Chinn and David Ford. 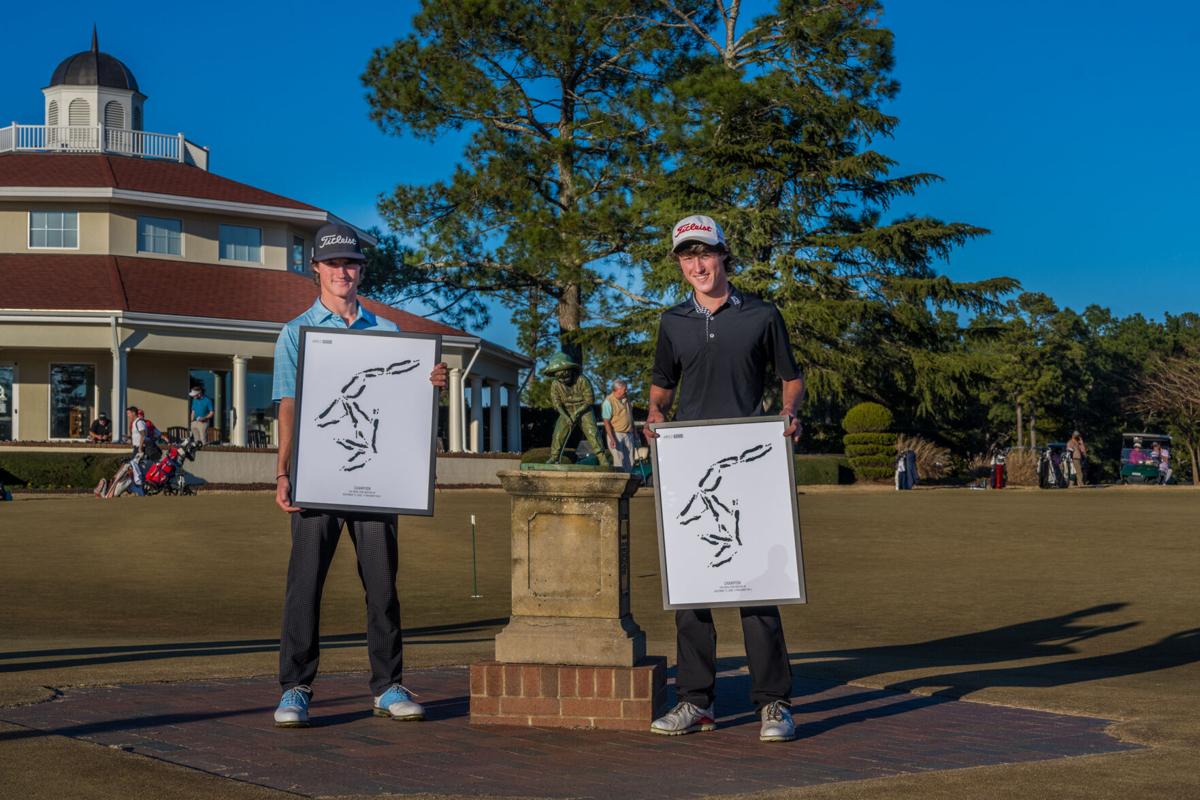 David Ford, left, and Maxwell Ford pose by the Putter Boy statue with their trophies after winning the Royal Pine golf match Sunday on Pinehurst No. 2. 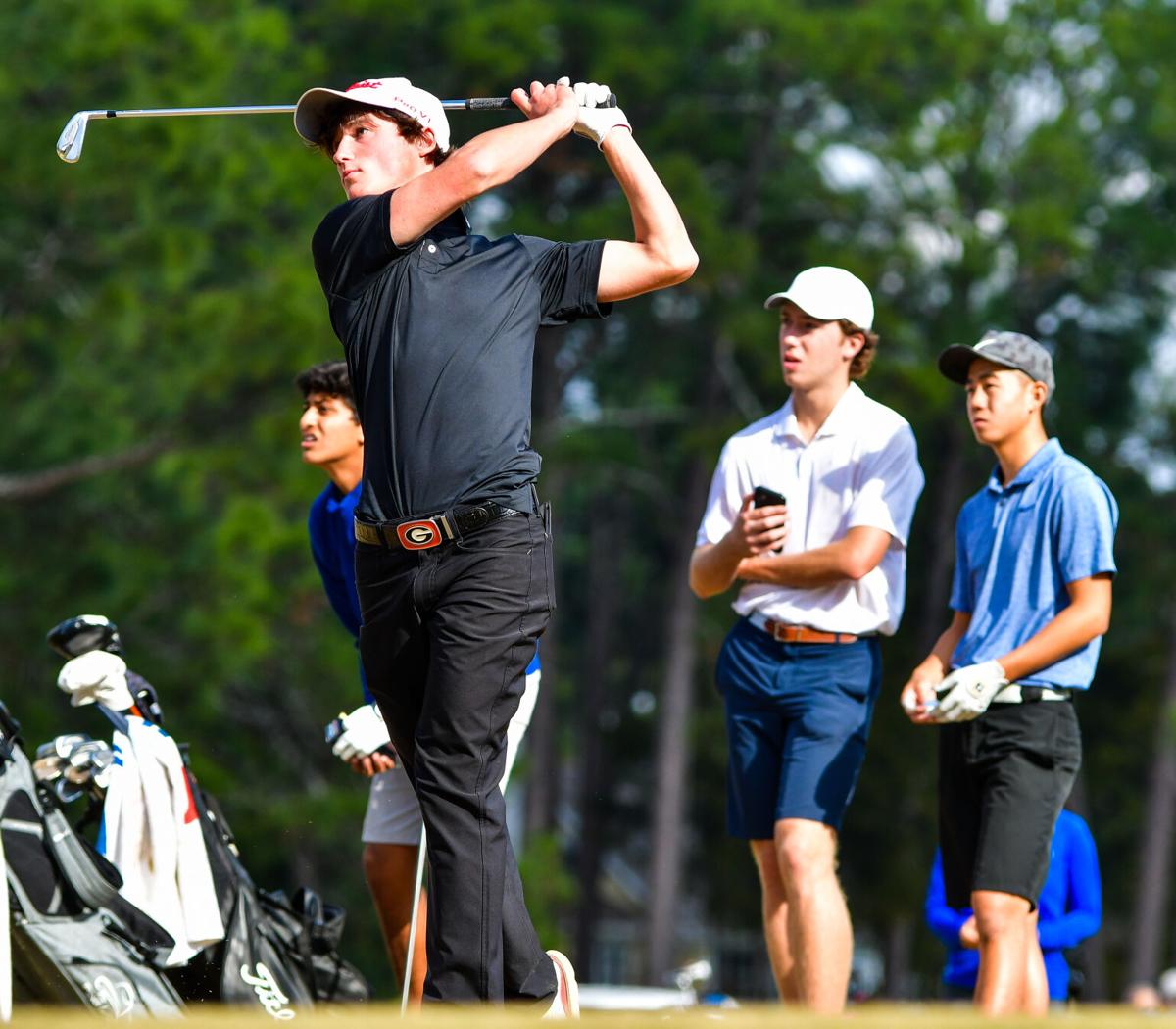 Maxwell Ford watches his tee shot during the inaugural Royal Pine golf match hosted by Junior Golf Live Sunday on Pinehurst No. 2. Watching on in the background, from left to right, is Deven Patel, Jackson Van Paris and Kelly Chinn.

With his team’s lead dwindling on the back nine on Pinehurst No. 2, Maxwell Ford embraced the resistance that came in the inaugural Royal Pine junior golf match play event on Sunday.

Playing alongside his brother David, Maxwell delivered clutch shot after clutch shot over the final four holes as the brother tandem defeated the team of Kelly Chinn and Deven Patel 1 up in the event sponsored and live streamed by Junior Golf Live.

“I wanted to win, but I was kind of excited that it was all square going into 15 because that adds pressure,” Maxwell said. “That’s the best thing for improving my golf game. I was more excited than sad that we lost the lead.”

Maxwell will play next year at the University of Georgia and played the part of the closer for his team after not playing in contention in a major junior event in more than a year as his last AJGA win came in the 2019 Jones Cup Junior event.

“I haven’t really been in contention too much recently and I’m just trying to get in contention so I can use that, which I feel like is my strength,” Maxwell said.

While Sunday’s match was merely an exhibition, going up against a team with two of the top 50 junior golfers in the country that were all close friends provided a competitive push.

After the Ford brothers took a 3 up lead at the turn, the margin shrunk over the next five holes as the match went all square on the 14th hole. During that run, Chinn, a Duke commit and the No. 2 junior golfer in the country, had birdies on No. 11 and 14, while Patel, a Virginia commit, birdied the short par-4 13th hole.

With David teeing off first for the group during the match, pressure was put on Maxwell as he watched his teammate's shots into the green fly long on the 15th and 16th holes. But that’s when Maxwell’s shots found the mark to set up the win.

“I didn’t hit it too great, but the good shots I hit, they seemed to find a way to miss the green and that’s Pinehurst for you,” David said. “My partner had my back and hit a few good ones in there.”

The par-3 15th hole was halved after a pair of pars before the lead went back into Ford's possession with a 3 from Maxwell on the 16th hole. The short putt to win the hole was set up by a well-placed drive and a precise 5-iron from Maxwell to pin high.

“I feel like it changed on 15. I started swinging it better,” Maxwell said. “I think my swing gets better under pressure. I was just trying to hit each shot in front of me and I hit them all well.”

With a chance to close out the match on the 17th hole, Maxwell’s tee shot into the par-3 landed seven feet right of the hole. Also playing up in the clutch moment was Chinn as his tee shot landed inside of Maxwell’s and spun around the back side of hole to nestle close for a conceded birdie putt.

Maxwell kept the advantage at 1 up by pouring in his birdie putt.

To close out the match, all four players missed approach shots into the 18th green, and the short play from all four top junior golfers was showcased one last time with par saves for both teams that was enough to close out the win.

To help build that early advantage, Maxwell recorded back-to-back birdies on the par-3 sixth hole and the par-4 seventh in a stretch where a 1 up advantage from Chinn and Patel was flipped to 2 up in the Fords' favor by winning three straight holes.

David, the top junior golfer in the country and a UNC commit, had a birdie on the par-5 fifth hole to move the match to all square.

Chinn and Patel dropped its fourth hole in a five-hole stretch on the par-3 ninth after both found bunkers short and long of the green, got within six feet for par and had par putts that burnt the edge to set up the large deficit entering the back nine.