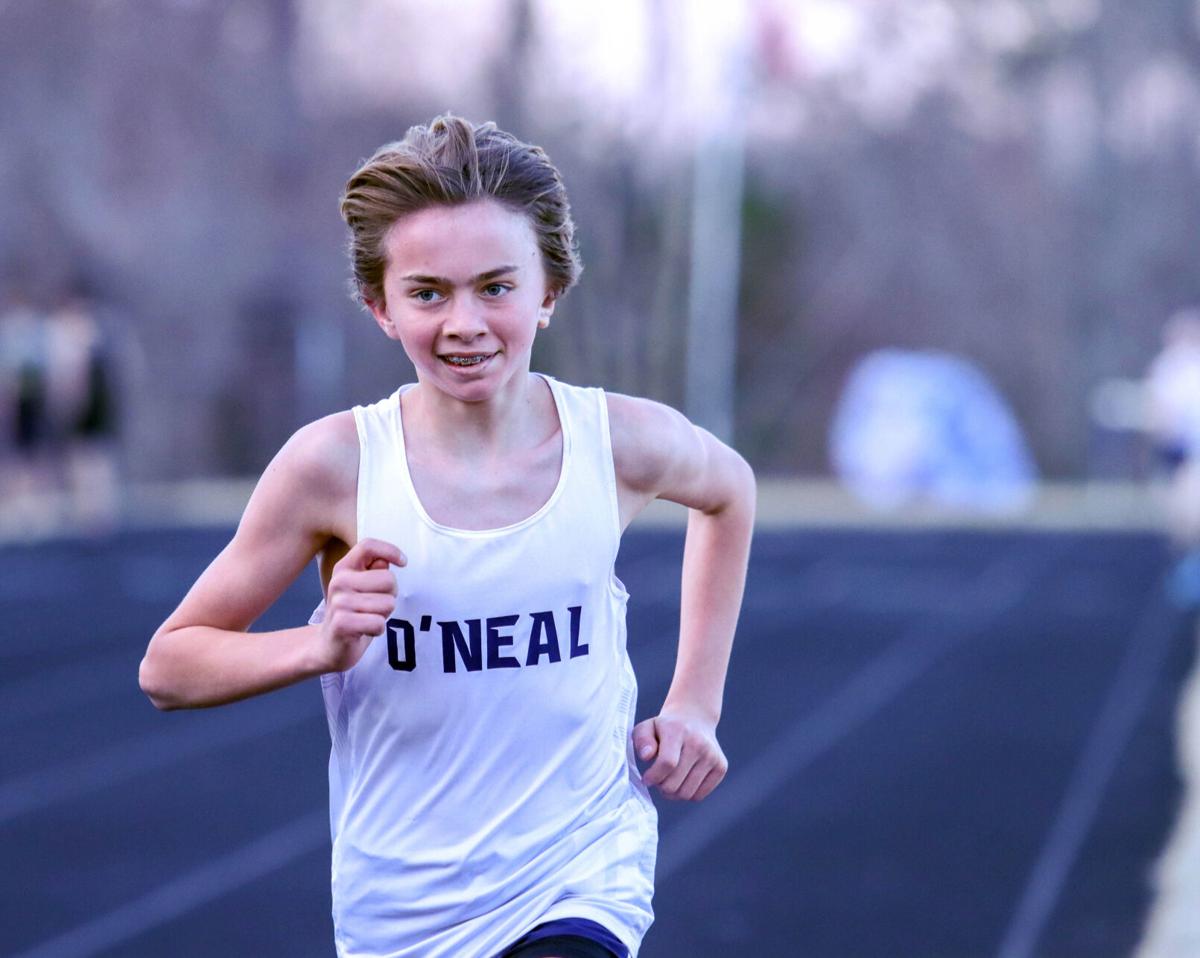 O'Neal's Corbin Weeks runs in an event during a track meet this season. 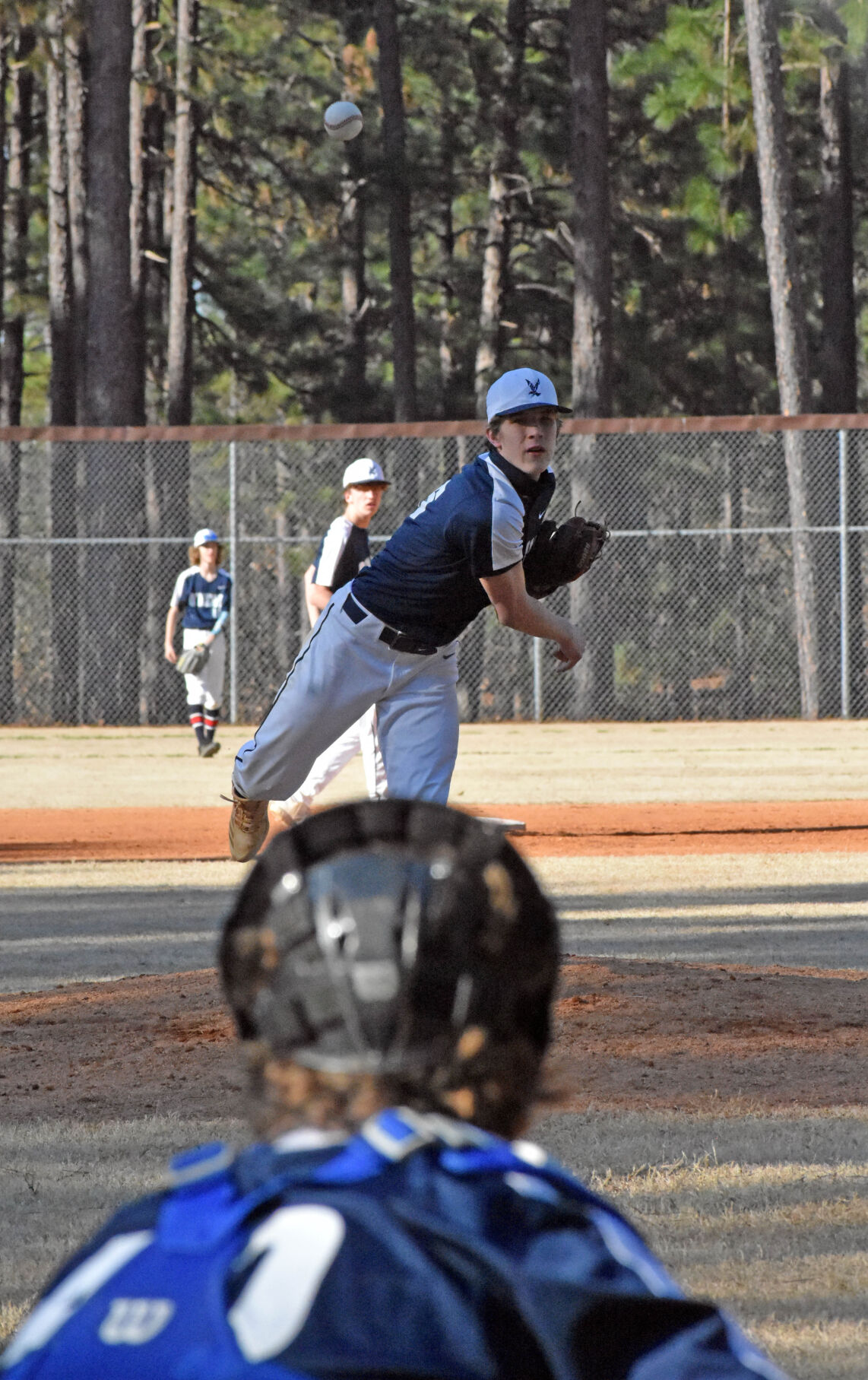 O'Neal pitcher T.J. McGraw delivers to home plate in a game this season for the Flacons.

The boys took first place while missing several of the team's top athletes.

Josh Manning took off from the long jump at top speed and after launching himself into the air was able to eat a sandwich and drink a Gatorade before landing at the tail end of the sand pit. We’re currently in negotiations with our host school to get more sand. Josh needs more sand.

Florian “The Terminator” Steiner, our Austrian international student, performing in his first ever track and field meet ran his competitors down like a man brought back from the future to hunt down much slower American athletes. Wearing black sunglasses, leather jackets, doesn’t say too much but when he does so, speaks with an Austrian accent, and although appears to be human like, allegedly has metal for bones. Dude was amazing to watch today!!!!

The girls took second place with 10 of 13 of our athletes competing.

Three of our female athletes that were able to compete today did so nursing an injury to show grit. This was also the very first meet for four more of those female athletes, and they performed remarkably, placing in the top three of some events.

Team Captain, Caelan McHarney, who is nursing a running injury was “supposed to” not run and just throw some heavy things and did so after about 45 minutes of instruction from Coach McHarney. She took second in the Shot Put. After one of our speed demons nagging injury became too much to overcome, we asked Caelan to step up and run the 4x400 relay. Although our team finished second, they did so with everyone one of our athletes voluntarily stepping out of their comfort zone.

Molly Kuzma, well, Molly doesn’t lose. It’s basically a fight for second and third for any and everyone else.

In order to qualify for state finals in May, athletes must compete in at least two total regular season meets. The following Falcons have already met the performance requirements for state finals after our first meet: Manning in the110-meter Hurdles and Long Jump, Kuzma in the 1600-meter and the 800-meter, Nathan Brianas in the 300-meter Hurdles and Corbin Weeks in the 3,200-meter.

The boys varsity tennis team is off to an even start after their first two matches, losing to Burlington Christian Academy, 5-4, and winning against Cary Christian School, 6-3. On Friday, the boys traveled to Raleigh to play Trinity Academy.

The Varsity Boys Golf team journeyed to Wallace Thursday to test their mettle on the challenging River Course at River Landing Country Club. Blustery winds and slick greens made the conditions difficult, as the team fell a little short, dropping a tough match with Harrell’s Christian Academy and Parrott Academy. Jack Halloran led the team with an 82, finishing with an impressive one-over-par 37 on the back nine.

There will be no rest for the weary, as the Falcons head back out on the road for two matches next week. One in Raleigh and another in Greensboro. Despite the setback this week, the boys are still steadfast in their determination to capture the Tri-TAC Conference championship.

The O'Neal Middle School baseball team notched its First win of the season in its home opener against Fayetteville Christian on Thursday. Joey Wade got the start on the mound for the Falcons. Wade pitched two innings, allowing only two hits while striking out six batters, notching his first win of the season. Taylor Graves entered the game in relief and allowed no hits and while striking out two. Graves, Wade, and Matthew Fisher led the team at the plate with seven combined RBIs on three hits in the 10-run second inning, which sealed the game for the Falcons. Joseph Lucas and Graham Webb also had hits for the Falcons.

The team (1-1) returns to action next week with two away games, Monday at Cape Fear Christian Academy and on Thursday at Liberty Christian School.

The varsity baseball team defeated Northwood Temple 10-0 on Monday to improve to 3-0. T.J. McGraw went 3-for-3 and Aaron Pavlovich went 2-for-3 to lead the Falcons in hitting. McGraw picked up the win on the mound to go 1-0 on the season.

The Falcons played at Trinity Academy on Friday before returning home on Tuesday to face Fayetteville Academy. The varsity Falcons are currently ranked seventh in the state in the N.C. Independent School Association MaxPreps poll.

After a strong three days of practice, the middle school girls team headed to Freedom Christian for their second game of the season. A fast start saw the Falcons jump to a 2-0 lead in the opening minutes of the game behind goals from Allie Webb and Jordin Reed. The remainder of the first half had the Falcons dictating possession of the ball, but just unable to knock home any additional chances. In the second half, the high energy from all team members led to numerous chances on goal and saw Kennedy Moore and Lily Stanley both score their first goals of the season. The Falcons finished strong winning 4-0 in a terrific team effort from start to end.

The Falcons will play next on Wednesday at Village Christian and then host Lee Christian on Thursday for their first home game of the season.

The Varsity Girls’ Soccer Team improved their current win streak to two after a 3-0 victory at Northwood Temple on Tuesday. While the team struggled to move the ball and capitalize on opportunities throughout much of the first half, the second half performance was much better. In fact, improved ball movement and positioning on the field allowed the Falcons to gain multiple second half scoring opportunities and two goals. This vast improvement occurred gradually as the players adapted to a slightly changed formation. Additionally, some players had been placed in new spots on the field and had to learn the positioning and responsibilities of their new role. Despite these challenges, the team rose to the occasion and finished the match with a 3-0 win. In order to prepare for the next game against Trinity Academy, the team will be shifting focuses to defending and better ball control.

Upcoming matches for the team include a home against against Fayetteville Academy on Tuesday at 4 p.m.