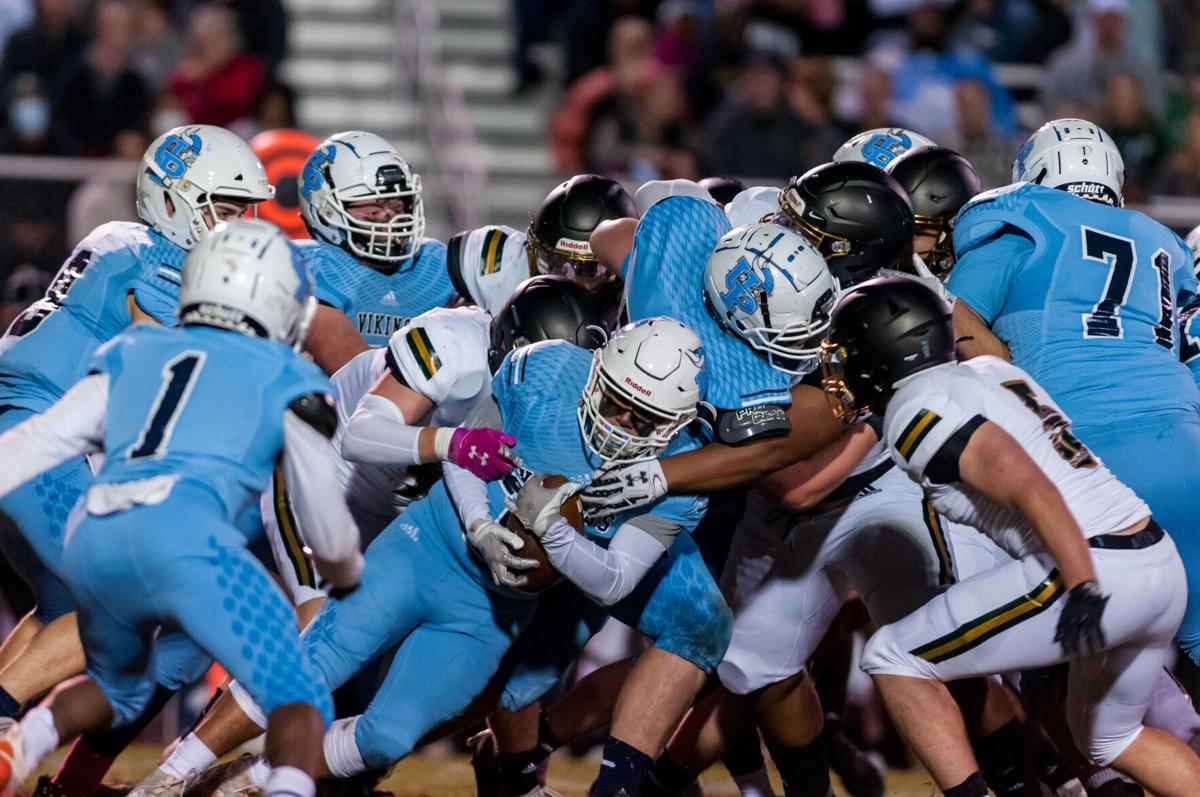 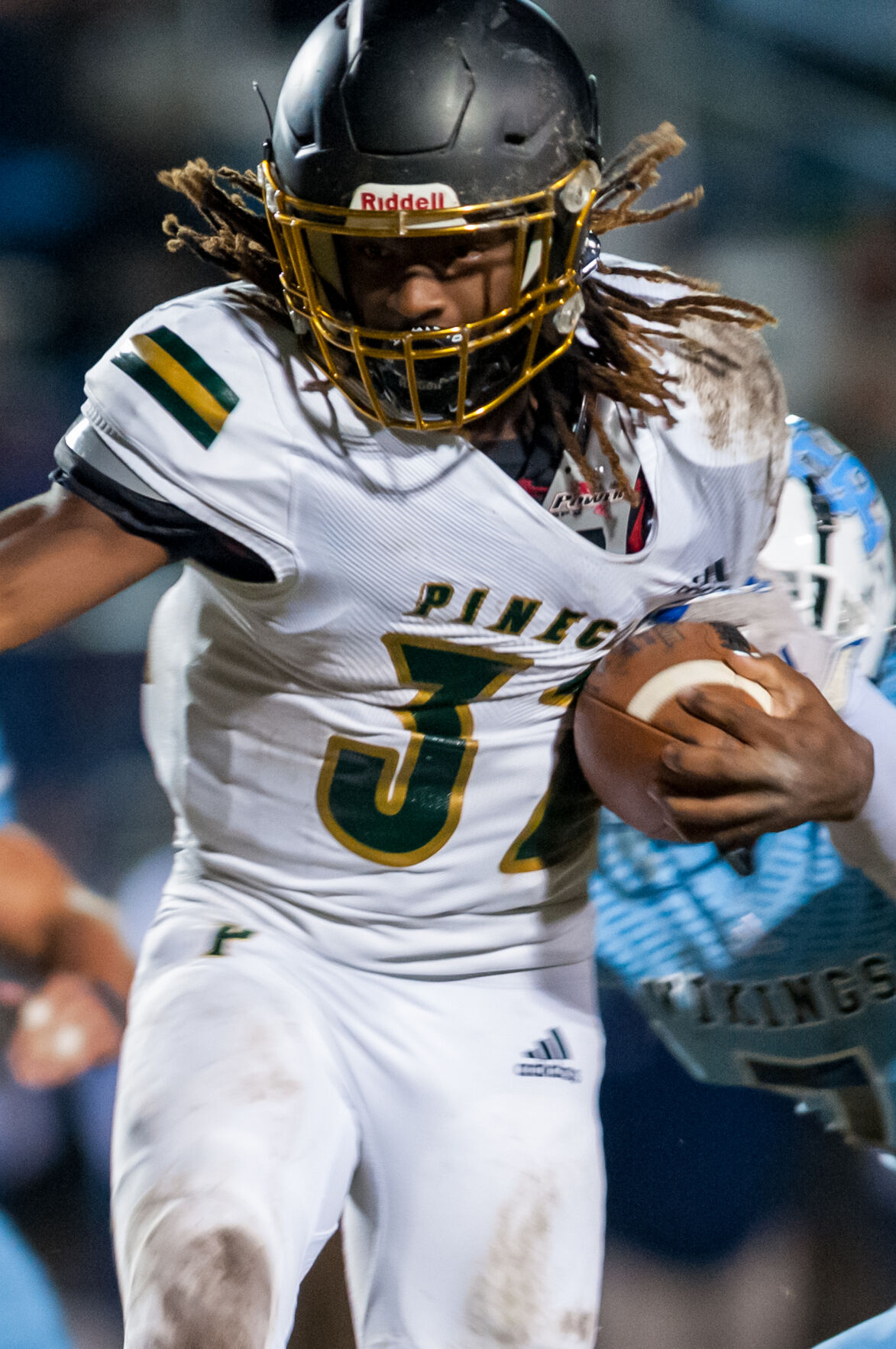 Pinecrest Patriots running back Nahjiir Seagraves (32) runs with the ball against Union Pines. 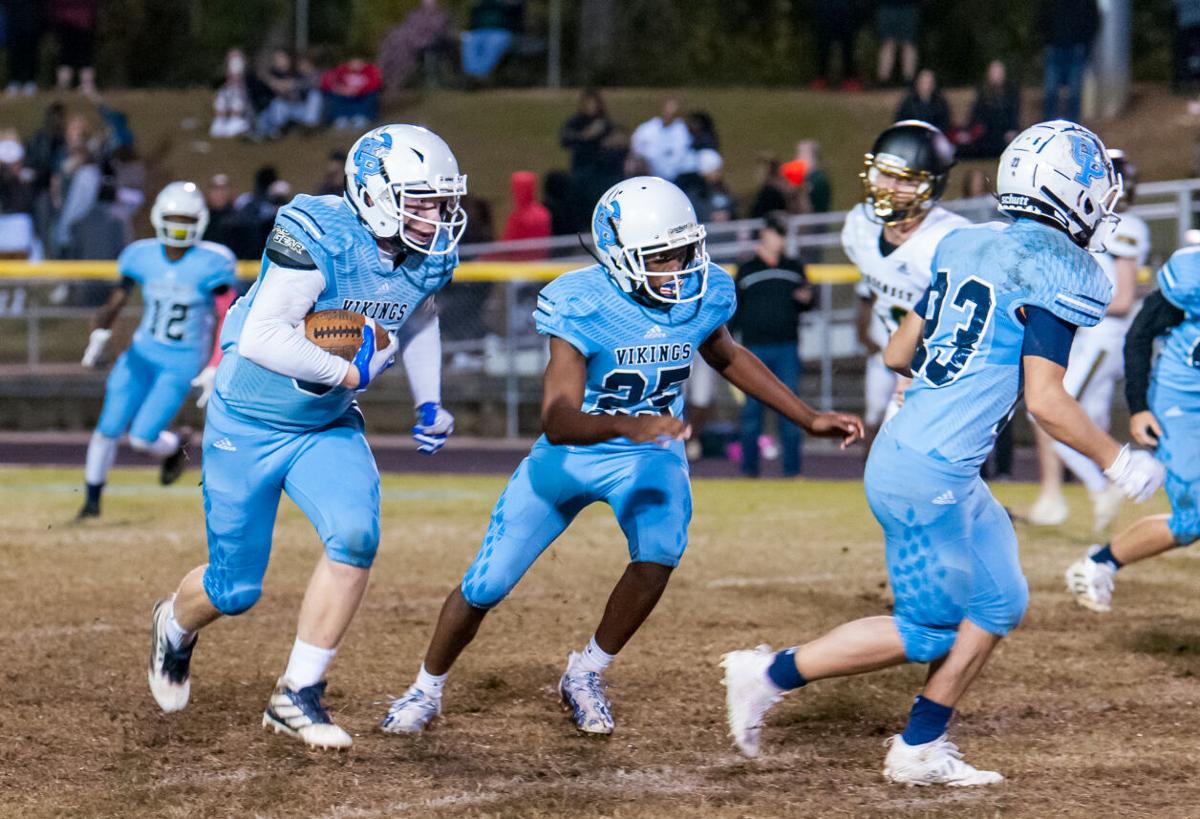 Union Pines senior Josiah Sauls (54) scoops up a fumble and returns it for a touchdown against Pinecrest in his final high school football game at home Friday. 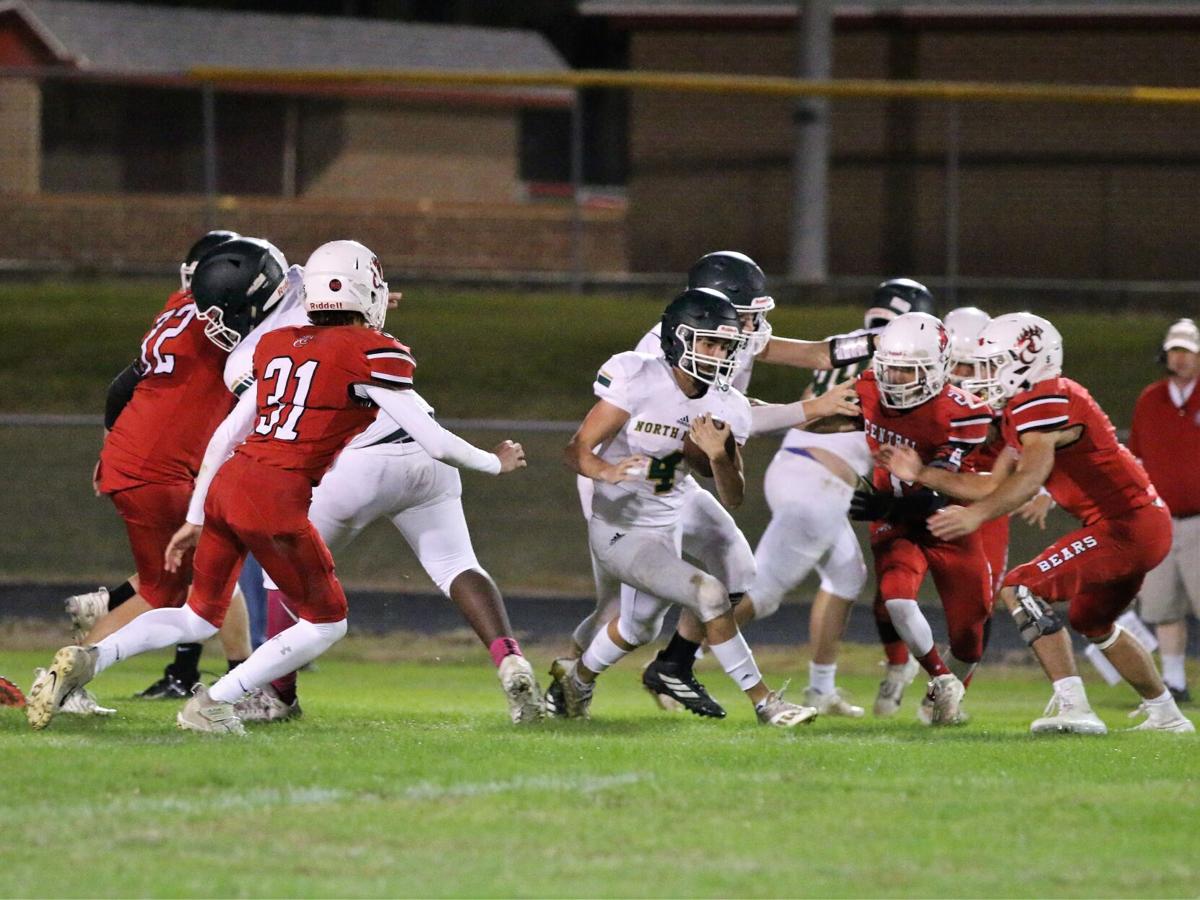 North Moore senior Justis Dorsett (4) carves through the Chatham Central defense on the road Friday in the win to close out the regular season for the Mustangs.

From setting the tone on the opening kickoff, fueled partly by a prank left outside of the Pinecrest fieldhouse overnight, the Pinecrest football team continued its roll to close out the regular season in convincing fashion Friday at rival Union Pines.

The Patriots finished the regular season with a second-place finish in the Sandhills Athletic Conference by scoring with its offense and defense in a wave of points in the first half en route to a 64-6 shellacking of the Vikings.

“We had to stay focused. We weren’t going to let anything that happened to us this morning get to our heads,” senior defensive lineman Will Brock said. “It was probably just the atmosphere and the game made everybody play better it seemed like. We were all pumped up for it.”

A fresh coat of light blue paint on a rock outside the fieldhouse, among other marks left by someone believed to be connected to the Patriots’ cross-county rivals, were there for the team to see first thing Friday. To Pinecrest, it was more outside noise the veterans guided the team to drown out ahead of the season finale.

Holding Union Pines (2-8, 1-4 Sandhills) to less than 100 yards of total offense, the domination coupled with the anticipation of the Pinecrest (8-2, 5-1 Sandhills) defense limited the Vikings all night.

Pinecrest jumped out to a 31-0 lead after the first quarter, with the initial shockwave coming on the opening kickoff. Senior Braden Cole started the kickoff in normal stride before booting the ball to the required 10 yards and his teammates jumped on it to set up the first offensive possession.

“It was just to set the tone, right up front. I don’t think they were ready for it. We just saw something in film where we saw some of their guys jumping quickly,” Pinecrest coach Bob Curtin said. “One of our philosophies is we’re going to do things that people don’t expect us to do. When you come to Pinecrest, be ready for anything and everything.”

Cole had a busy night in the blowout win with nine kickoffs, for an average of 44 yards per kick with five going for touchbacks.

The first quarter featured four Pinecrest touchdowns, three from the offense and one from the defense when Brock jumped in the way of a pitch from Union Pines quarterback Ben Finkelstein. He then scooped up the loose ball and shook off a Viking tackler for a touchdown to make it a 31-0 Pinecrest lead late in the period.

“I saw the ball and just grabbed it and headed to the end zone. It was pretty short and sweet, but I had just one thing on my mind,” Brock said. “That was just getting back there.”

The other three scores in the first quarter came on the ground from Nahjiir Seagraves, Xavier Dowd on his one handoff untouched from 75 yards and J.J. Goins on an end around.

The second quarter continued the offensive onslaught. Sophomore quarterback Mason Konen connected with Cullen Martin for a 43-yard touchdown and Omar Pemberton scored 29 seconds later after the Pinecrest defense forced its third turnover to that point.

A fourth turnover with two seconds left in the first half set up a valuable learning experience for the Patriots. With the ball on the Union Pines 22-yard line, the Patriots quickly set up its field goal unit, and Cole hit a 39-yard field goal as the halftime horn to make it a 50-0 Pinecrest lead.

“I liked that because it was like an end of the game scenario with two seconds on the clock,” Cole said. “It was good to get that feeling so that way when I have to do it in the playoffs, I won’t be in shock.”

Union Pines turned the ball over five times, but even after taking an early shot from the Patriots, coach Jason Trousdale saw his team continue to show the same “no quit” attitude the team had shown throughout the tough 2021 season.

“We haven’t quit all year. Regardless of the score, they just keep fighting. That’s one of the things we talk about, finishing the fight,” Trousdale said. “We just ran into a buzzsaw. That team is as good as there is I think in the state.”

Down 64-0 with less than 3 minutes to go, the Viking defense jogged out on the field following a fifth offensive turnover. Reserves from both sides lined up and an errant snap landed in front of Viking senior linebacker Josiah Sauls. In front of what was possibly the biggest crowd he had played in front of, Sauls savored one of his final high school football moments as he returned the ball 56 yards for a touchdown.

“Just knowing my brothers were behind me, running with me. It was an honor running with them one last time,” Sauls said. “It’s been a true brotherhood.”

The return and the continued fight to the end that Sauls and his teammates showed was a glimpse of what Trousdale had seen from the Vikings this fall.

“It was his first varsity touchdown. It’s his first touchdown ever,” Trousdale said. “At the end of the game, we let the seniors talk. We thought it was important because they said what it meant to them to talk to their underclassmen about what it means to be a Viking.”

Closing out with its fifth win in a row, Pinecrest will now await its playoff fate as it hopes to open next Friday with a home game in the first round of the 4A state playoffs.

“I think we are in a really good place,” Curtin said. “I expect this football team to be really good if they continue to do what they are doing.”

The build up for this season began in the spring when teams across the state played an abbreviated schedule, and what has unfolded in the last 12 months for the North Moore football team is something recently unprecedented for the Mustangs on the gridiron.

Closing out the regular season with a 36-6 win on the road, North Moore defeated Chatham Central to claim the outright 1A title from the Mid-Carolina Conference.

"When you get a chance to wrap up your regular season, and really get a chance to step back and look at it big picture wise, 9-1 is incredible," North Moore coach Andrew Carrouth said. "Our kids have taken it and run with it this year. I'm so proud of them and so excited to see the looks on their faces tonight when we say that, 'We're champs.'"

The Mustangs (9-1, 5-1 Mid-Carolina) scored five touchdowns and came away with a pair of turnovers to down the Bears.

Justis Dorsett, who scored a state-record tying eight touchdowns against Chatham Central in the spring, found the end zone four times and rushed for more than 250 yards in the win.

"He did Justis Dorsett things where he was kind of running around people and running through people and all that," Carrouth said. "It's because he's a special young man. The kid is one of the best football players I've been around and one of the toughest kids I've been around. He's earned every bit of the success he's having now."

Javory Wall scored the other touchdown for the Mustangs. Senior Olajawuan Person had an interception for the defense.

The Mustangs now wait to see who their first-round playoff opponent could be if they are not seeded high enough to receive a first-round bye.

"The ability to know that you're in is huge, but also to know that we are going to be at home is another huge factor. The question mark is whether we're going to have a first-round bye or not," Carrouth said.