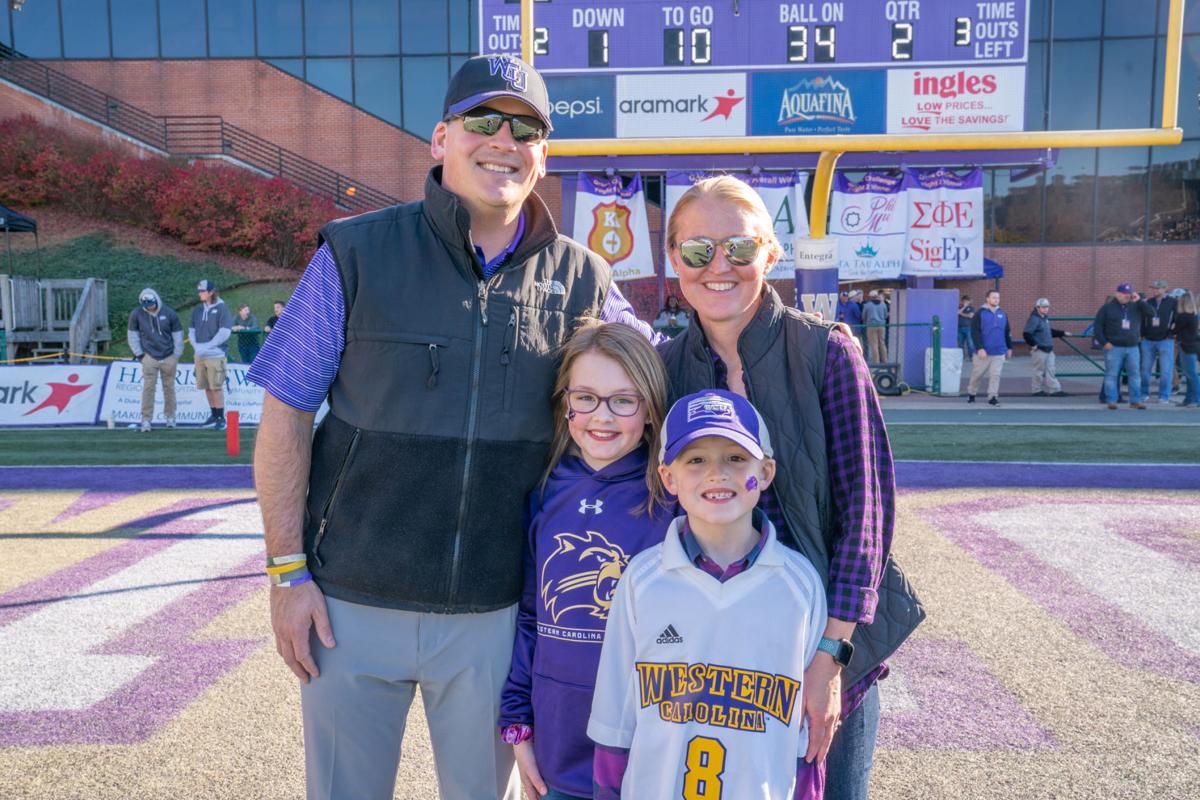 The Dunn family — husband, Andy, daughter, Ryan, son, Drew — joins Jordan Howell Dunn on the field at halftime of a WCU football game during Hall of Fame weekend. Her son Drew is wearing one of her old game jerseys. 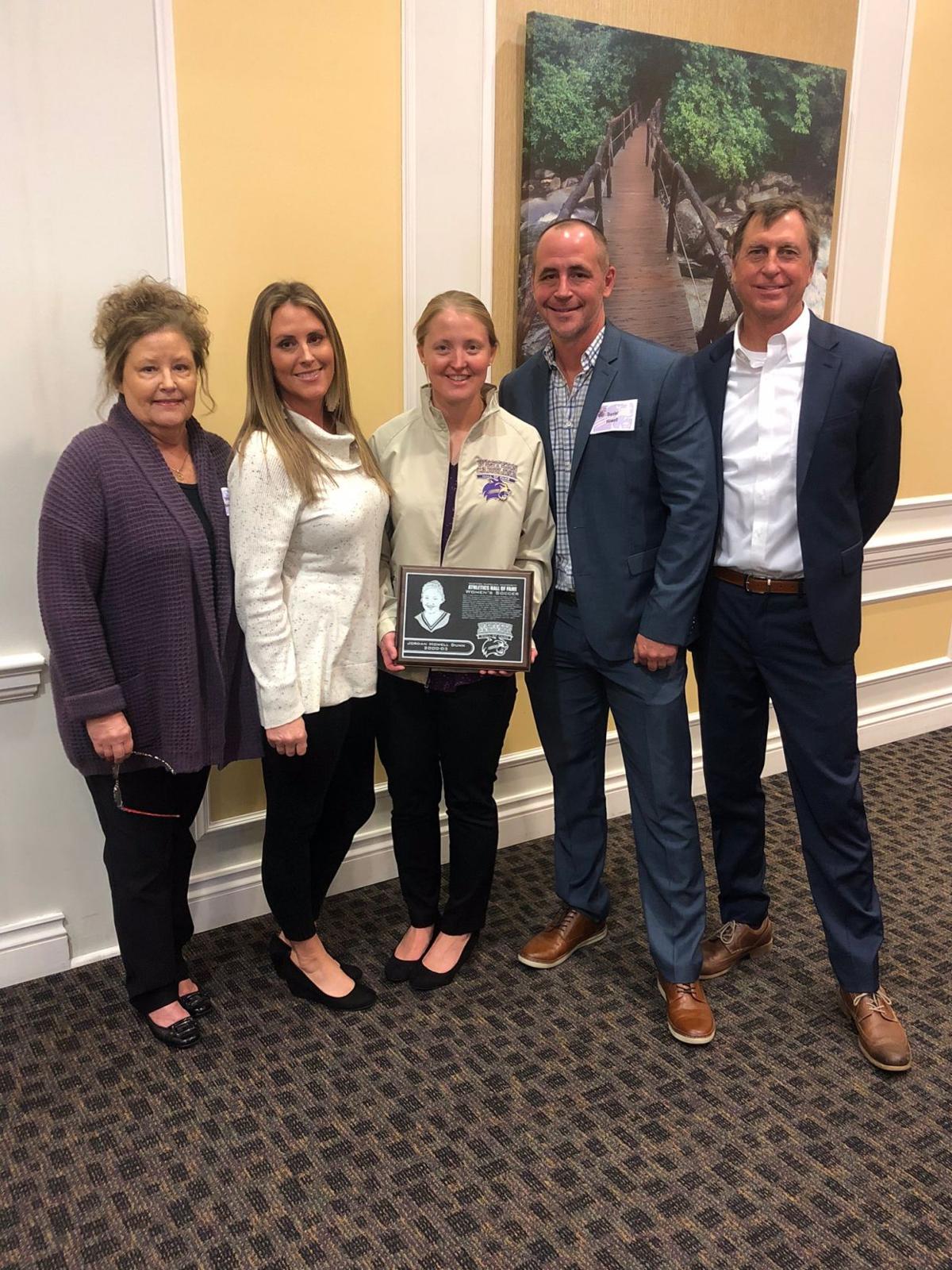 The Dunn family — husband, Andy, daughter, Ryan, son, Drew — joins Jordan Howell Dunn on the field at halftime of a WCU football game during Hall of Fame weekend. Her son Drew is wearing one of her old game jerseys.

From Armory Field to recently being named to the Western Carolina University Sports Hall of Fame, it’s been quite the soccer journey for Jordan Howell Dunn.

Dunn, the daughter of Ken and Deborah Howell of Southern Pines, recalls the ceremonies surrounding her induction into the Hall of Fame as “amazing.”

The event took place the weekend of Nov. 15-16. Saturday morning the induction ceremony was held and then Dunn and her family were introduced during halftime of a football game. She played women’s soccer at WCU from 2000 through 2003.

“I was really taken aback by it,” said Dunn. “It’s a big honor. I wasn’t expecting it when they called and told me I was selected. The whole weekend was amazing — it really hit me that all that hard work in high school and college really paid off.

“It was really cool.”

The genesis of her soccer journey began when she was a young girl and started playing in the Sandhills Youth Soccer League.

“I was like 5 or 6 years old and I remember it was at the Armory Field where I played my first soccer,” Dunn said. “My Dad was my coach. I was always No. 8. I still have those old jerseys with SYSL on the front and Ken Howell Masonry on the back.

“The league was co-ed, so I played with boys at the beginning. I started when I was in kindergarten and played through the sixth grade.”

In seventh grade she went the all-girls’ club travel team route with the Sandhills Spit, where she was again coached by her father. Then she joined a team in Fayetteville and finally a team in Raleigh.

“Back then they didn’t have all the club teams like they do now,” Dunn said.

And then she reached Pinecrest in 1997, where she played four years under the direction of Lorna Martin. Martin was the first coach for the Pinecrest girls’ program.

“It was awesome playing at Pinecrest,” she said. “I wouldn’t trade it for anything — representing my school and building memories.

“We loved Lorna Martin. We felt like we were one big family.”

Dunn said she still keeps up with the program, and was impressed by the girls reaching the final four two years ago and the state 4-A championship match last season.

“I like to think that we helped pave the way for where the program is today,” Dunn said. “We were always so positive.”

She also helped paved the way for the Catamounts’ women’s soccer program. She arrived at Cullowhee in 2000 on scholarship, just the second season the school had women’s soccer. In her four years at the school she proceeded to set several firsts and several records.

Here are the words used by the school’s website in announcing her selection to the Hall of Fame:

“As a first-team, All-Southern Conference soccer player and a second-team Soccer Buzz Magazine All-Southeast Region selection during her playing career, Howell amassed 79 career points, including 33 career goals during her four seasons, both of which continue to rank second in the program’s record books. During the 2001 season, Howell led the SoCon in points (37) and in game-winning goals with seven, which set a WCU single-season record. She also earned Arby’s/Catamount Student-Athlete of the month for August 2001. The sharp-shooting forward scored a program-record 10 game-winning goals, uncorking 216 career shots, which is the most ever by a Western Carolina University soccer player in spite of her playing career being shortened by a pair of knee injuries during both her sophomore and junior years.

Howell holds the distinction of earning WCU’s first-ever weekly honor from the Southern Conference, doing so by collecting Women’s Soccer Player of the Week plaudits on September 25, 2001. The previous week prior to the award, Howell scored five goals including one of her school-record three hat tricks.

An offensive star on WCU’s first-ever — and currently only — regular-season championship squad in 2001, Howell was an integral part of both WCU’s 14-match home winning streak and a run of 17-consecutive matches without suffering a loss that spanned October 3, 2000, through October 13, 2002. The Catamounts amassed a 16-0-1 home record during that two-year span with the 14-match unbeaten streak including overtime victories over Georgia Southern in 2000 and two double-OT wins over Coastal Carolina and perennial SoCon power, UNCG. Among those 14 victories, eight were shutouts.”

After her time at WCU was done, she moved on the next stage of her life, which included getting married and taking a job as a health and physical education teacher at The Lovett School in Atlanta.

She married Andy Dunn, who also was a WCU graduate. They have two children, a daughter, Ryan, and a son, Drew.

She teaches health and physical education at the private school in Atlanta where she is also the head coach for the school’s junior varsity girls’ soccer team.

“I always knew growing up that I loved PE,” Dunn said. “I can remember every PE teacher I ever had, teachers like Mr. (Jef) Moody and Mr. (Nat) Carter, were really big influences on me. It was a given that I was going to be a PE teacher and coach.”

And who knows? Dunn might just pay it forward and help inspire one of her students on an exceptional journey.