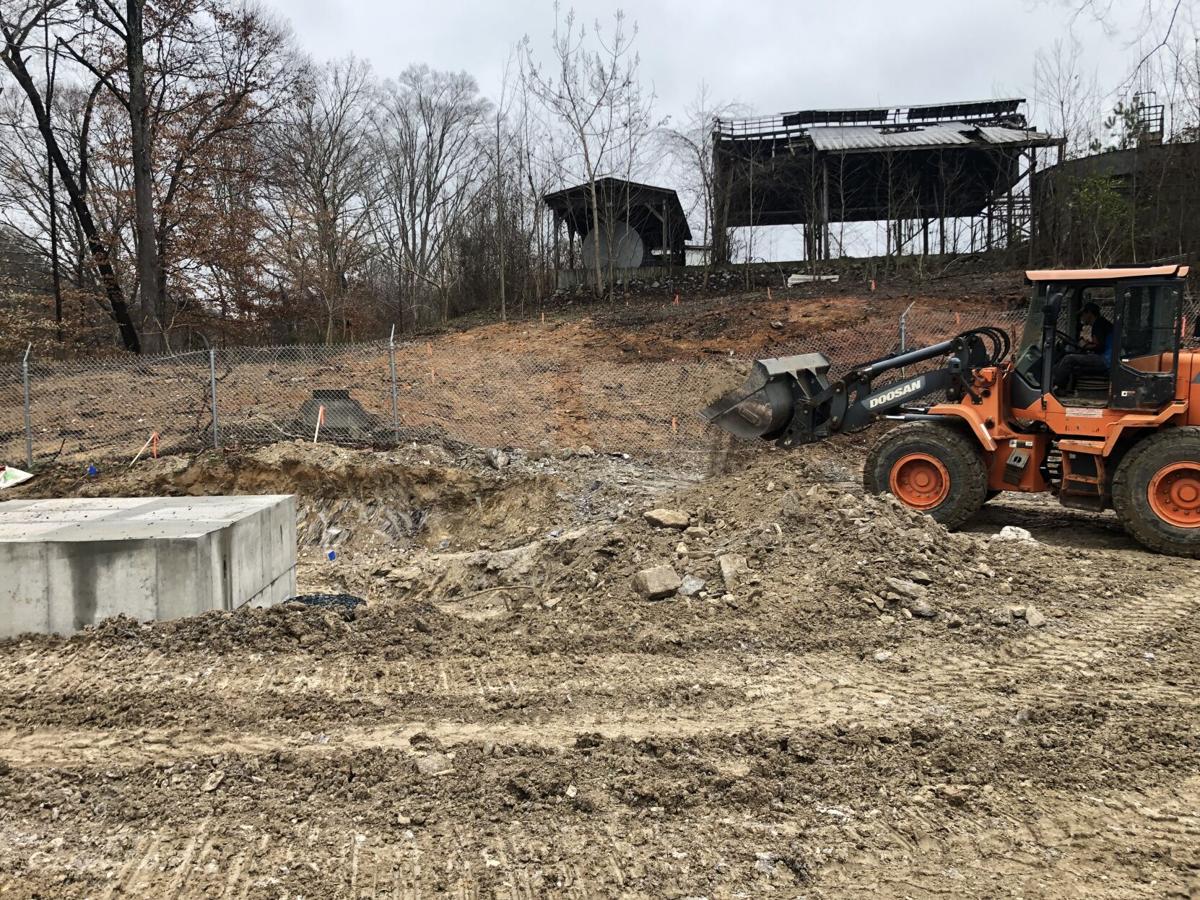 Heavy machinery moves dirty to fill in a whole at the main pump station located on NC 705 beside Bear Creek. 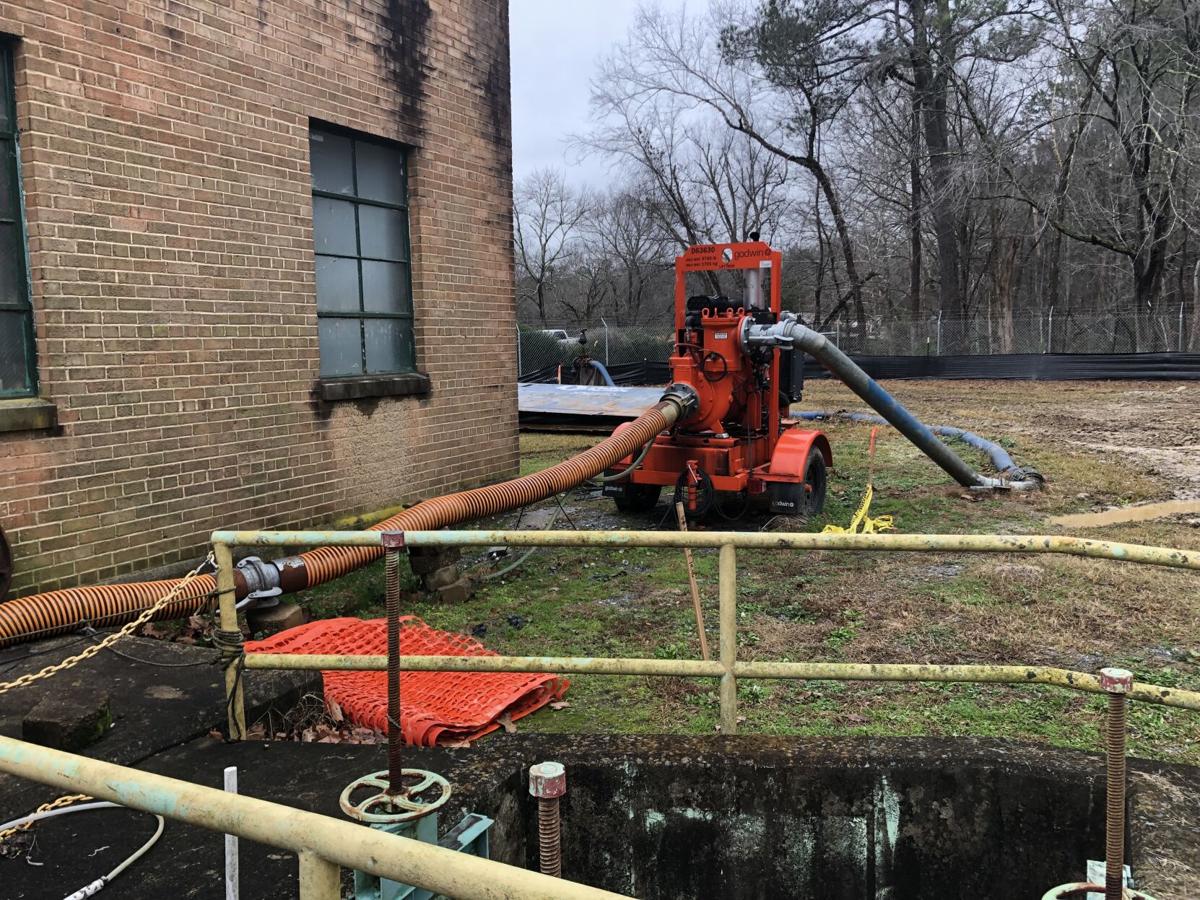 A temporary pump currently helps run the town’s wastewater treatment. When the upgrades are finalized, the output of the main pump station will be a million gallons an hour. 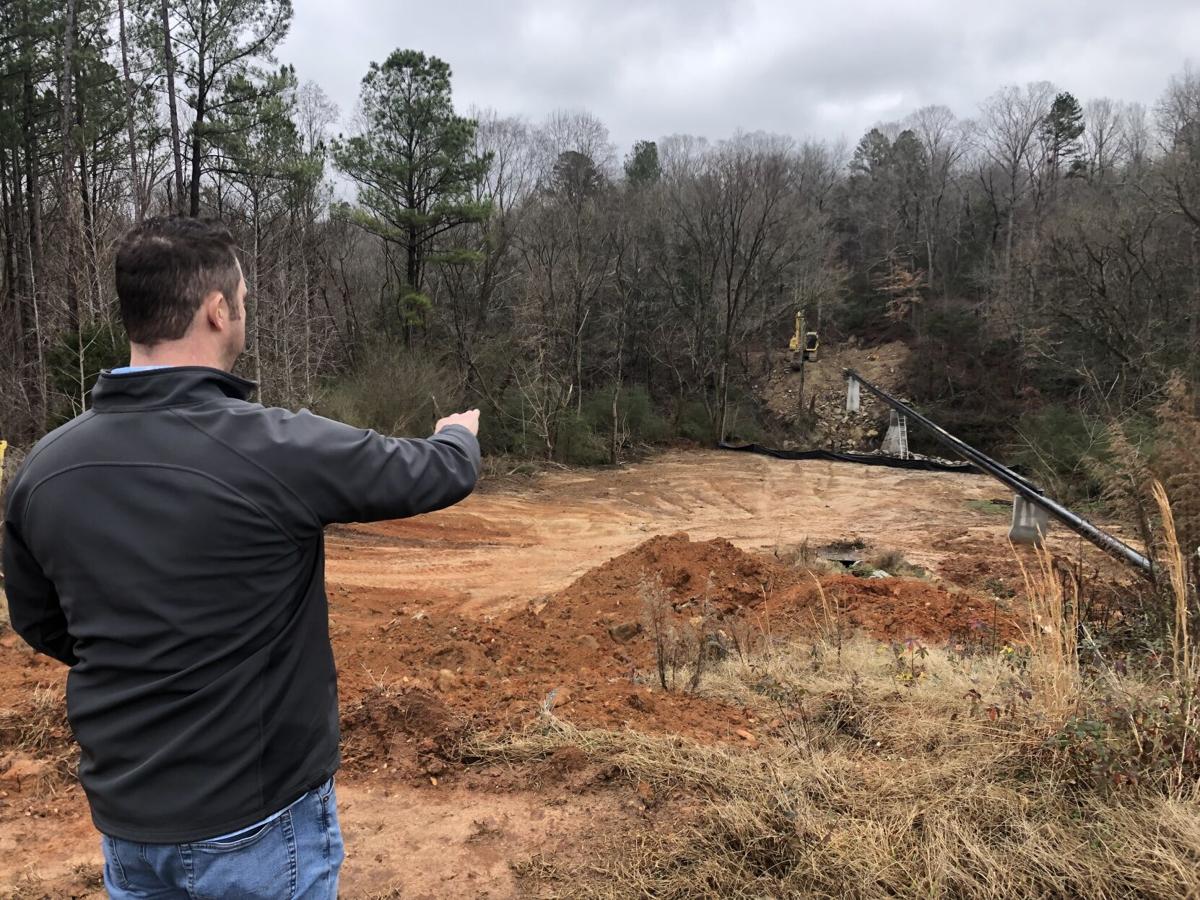 Robbins Town Manager Clint Mack points to the 300-meter-long outflow pipe at the town’s wastewater treatment plant. Work on two FEMA projects, which total $2.2 million, for the treatment plant are underway and have a June 2022 completion date.

Heavy machinery was busy at work moving bucketfuls of dirt at the sight of the main pump station for the town of Robbins’ wastewater treatment plant on the edge of Bear Creek Thursday.

The mild weather for December has allowed the work being done there and across the creek at the main treatment plant to run smoothly into the dead of winter and keep both projects inside of the timeline set by the Federal Emergency Management Agency to restore the town’s wastewater system.

The completion of the two projects, estimated to be covered inside the $2.2 million grant funding for both phases, brings an update to the back end of the town’s wastewater system, which could lead to a reduction of the water rates in the town after the system is put fully online in June 2022.

“June 30th is when our contract will expire with FEMA. We can get an extension, but we have other ideas for federally funded projects that we want to get these closed out on time,” Town Manager Clint Mack said.

Terry’s Plumbing and Utilities out of Asheboro was awarded the bid to repair the main pump station on the town’s side of the river. Work began last month; the contractor nearly missed the window to start work under the agreement the town and FEMA had established with the company. Upgrades at the pump station will send a million gallons a day to the wastewater treatment plant, doubling the facility’s production for the last three years. It has been using a temporary pump put in place after the former pump station was damaged by flood water from Hurricane Florence.

The new pump station’s capabilities will also mean fresher water will be transported to be treated at the plant, and a decrease in the cost for chemicals to make the water dischargeable into local waterways.

New headworks are being constructed for the treatment plant to handle the higher flow of water and crews from the J.S. Haren Co. are overseeing that project. The contractors have already put in an outflow pipe that will take treated water through a 300-meter long pipe that is supported in the air over Bear Creek to join in with an underground pipe on the other side. The treated water is taken through that pipe to Deep River to be released. The town has been granted a seven-year contract through the state Department of Environmental Quality to dispose of the water that way. Currently, the treated water is dumped into Bear Creek, with samples sent regularly to the department for testing.

Mack said the water source is vital to the town.

“When you look around the county, having a viable water source for various reasons, not just drinking water, is becoming a scarce resource,” Mack said. “Your toilet water is just as important.”

J.S. Haren’s representatives on site are also providing the town’s public works department workers with training of the new equipment as it is being put in place.

“We’ve got four public works guys that are basically jack-of-all-trades. If one guy is out there checking levels here half the day, that now will be taken care of, and now we have more time to fill more potholes and fix the road signs,” Mack said. “I’ve looked at ways to task organize for them to see what I can automate and what I can streamline through other avenues without them having their hands on it.”

While work has been going on at the two infrastructure sites, Mack and other town administrators have been reviewing finances to see what is possible to save residents money with the water rates, which are above the average in the county.

“I feel confident with the work being done and this upgrade we can progress into next year really focusing on sewer rates,” Mack said. “Our plant will be more efficient, the chemical price should go down, our labor cost should go down. We’re excited that this project should pass on some savings to our citizens.”

Options for how to possibly go about decreasing rates are being explored.

“Now we are in the process of confirming what rate is acceptable,” Mack said. “That part, the politicians will have to decide but we are definitely on track right now to give them options on rate deductions.”

Currently, Robbins’ water rates are nearly double that of the average in the county, and Mack’s fiscal conservative nature wants to make sure changes are made in a safe way for the town.

“Over the past 10 years, it has felt like they have said, ‘We need more money. Let’s increase (the rate).’ A lot of that had to do with natural disasters,” Mack said. “I feel like we have got that under control now. Our fund balance is healthy.”

Mack said lower rates could stir residential growth in the town for the future.