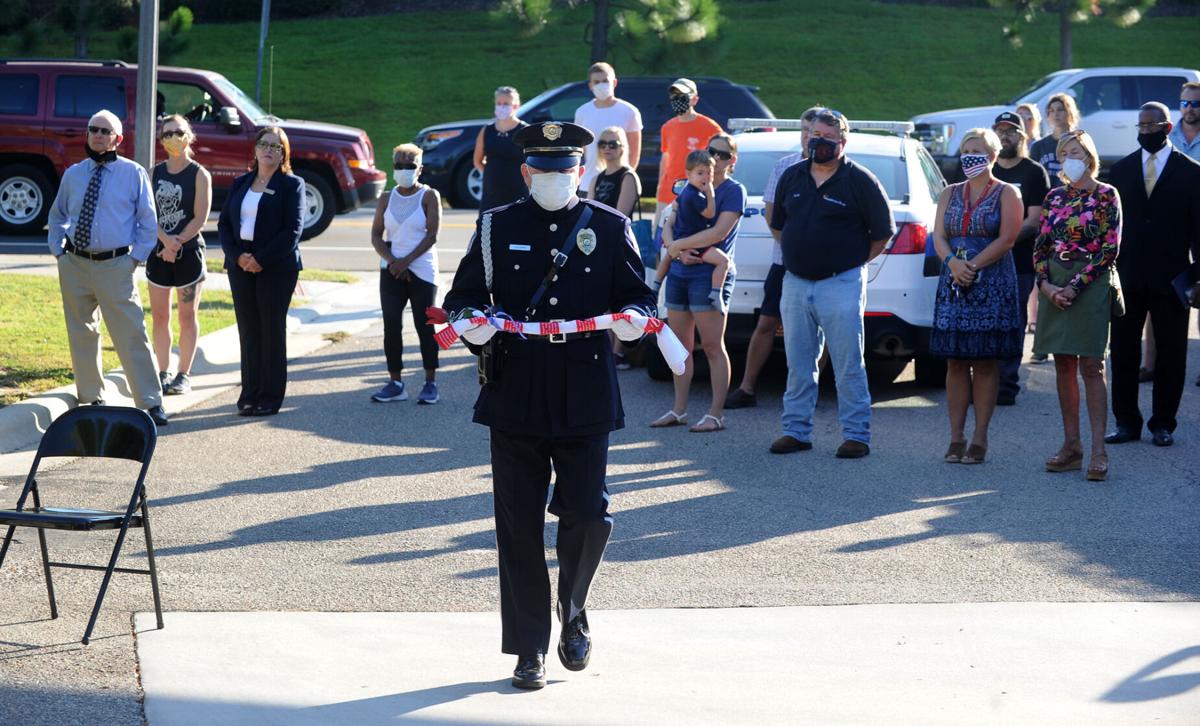 A flag bearing the name of first responders killed in 9/11 is presented for display at the Southern Pines Police Department during a ceremony marking the 19th anniversary of the terror attacks. 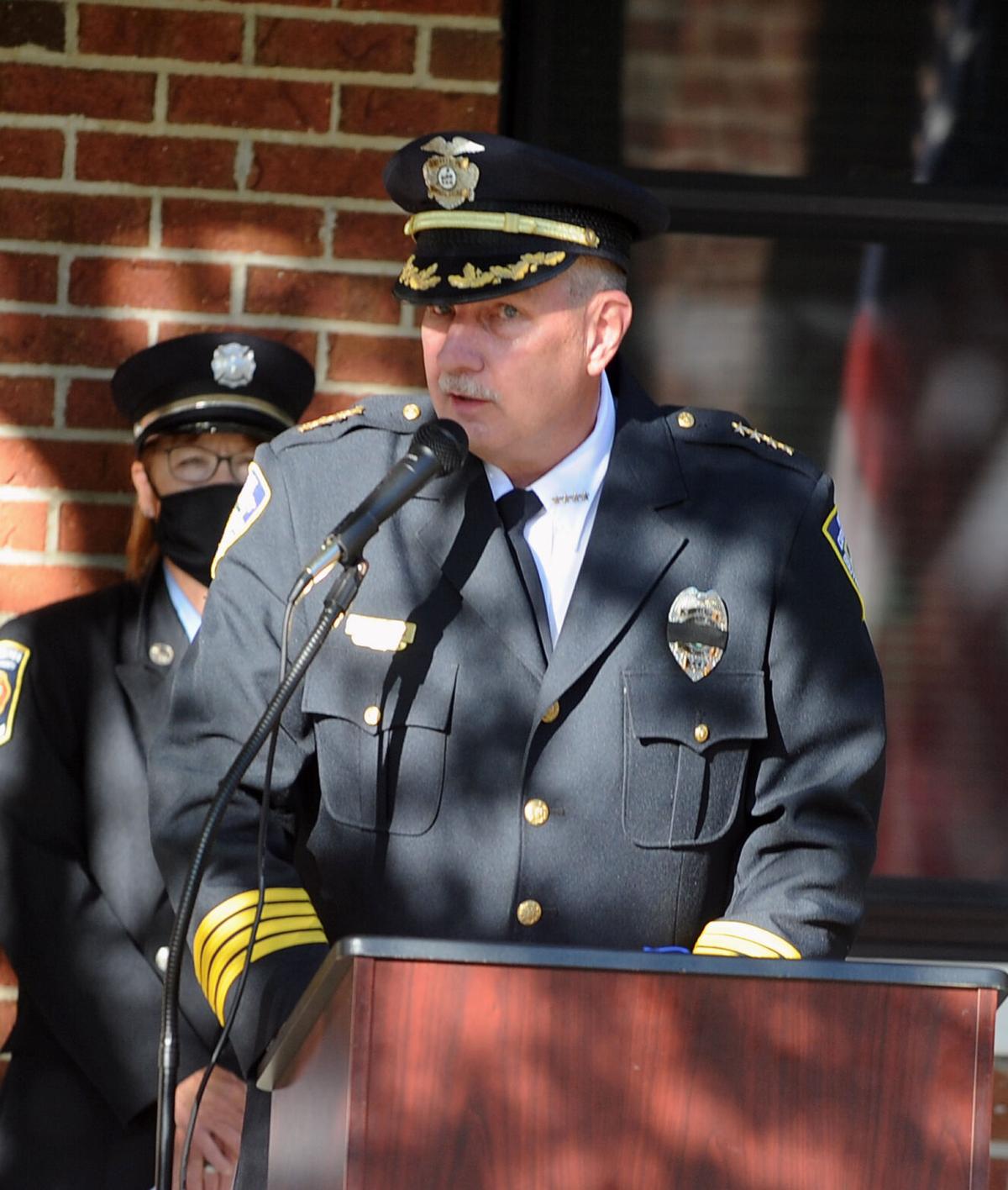 Police Chief Bob Temme speaks during a 9/11 ceremony at the Southern Pines Fire and Rescue Department.

On the 19th anniversary of 9/11, outgoing Southern Pines Police Chief Robert “Bob” Temme warned that the “flame of remembrance is burning out” for the nearly 3,000 people who perished in the terror attacks.

Temme, who is expected to retire on Oct. 1, worked in the rubble of Ground Zero as a first responder. In the eyes of individuals born after the terror attacks, he said 9/11 is “just another history lesson in line with Pearl Harbor, D-Day or the fall of the Soviet Union.

“But the waning of commitment to remember 9/11 and all that it stands for does not fall solely on the new generation,” he said. “Take a look around today and you’ll find American flags still raised to the top of the flagpole in spite of a presidential proclamation of remembrance dictating that the American flag be flown at half-staff.”

He added: “We must gather to teach our children the importance of learning what occurred on September 11th, 2001, how it changed the lives of many and how it changed our country forever.”

At the conclusion of his remarks, Temme presented his soon-to-be successor, Deputy Chief Nick Polidori, with a plaque to be displayed inside the police department following his retirement. The plaque, Temme said, represents a “small token of my commitment to seeing that my brothers and sisters of the Southern Pines Police Department, both present and future, never forget the heroes of 9/11.”

Temme also presented Polidori with a flag bearing the name of every first responder killed on 9/11.

“It is my wish that you will fly this flag in place of the police department flag each September 11th from dawn until dusk as our sign to our community that, yes, we will always remember and never forget — and (we’re) hoping the community will do the same,” he said. 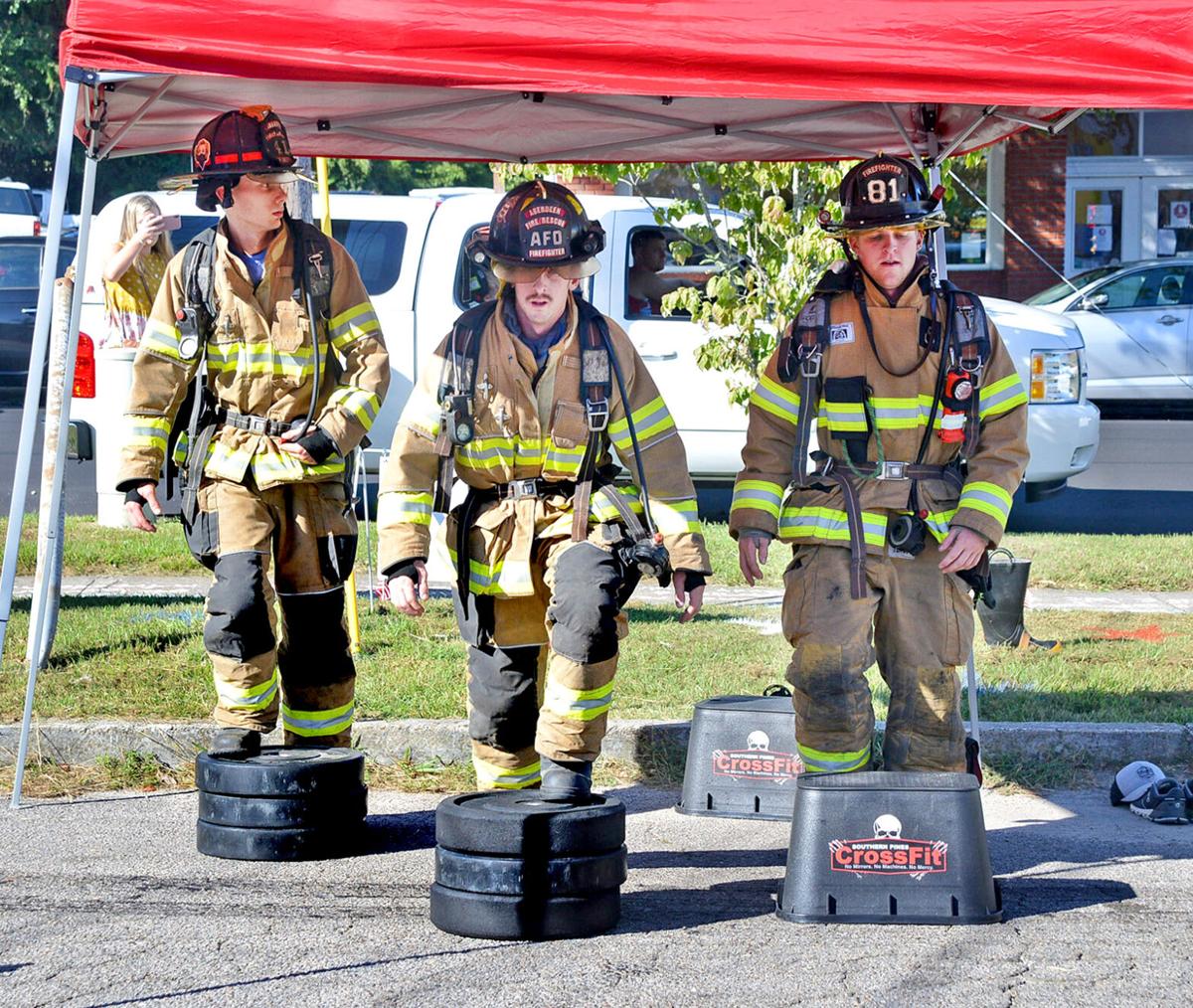 L-r: Zac Sharpe and Matt Horner, both from the Aberdeen Fire Department and Nash Neptune SPFD 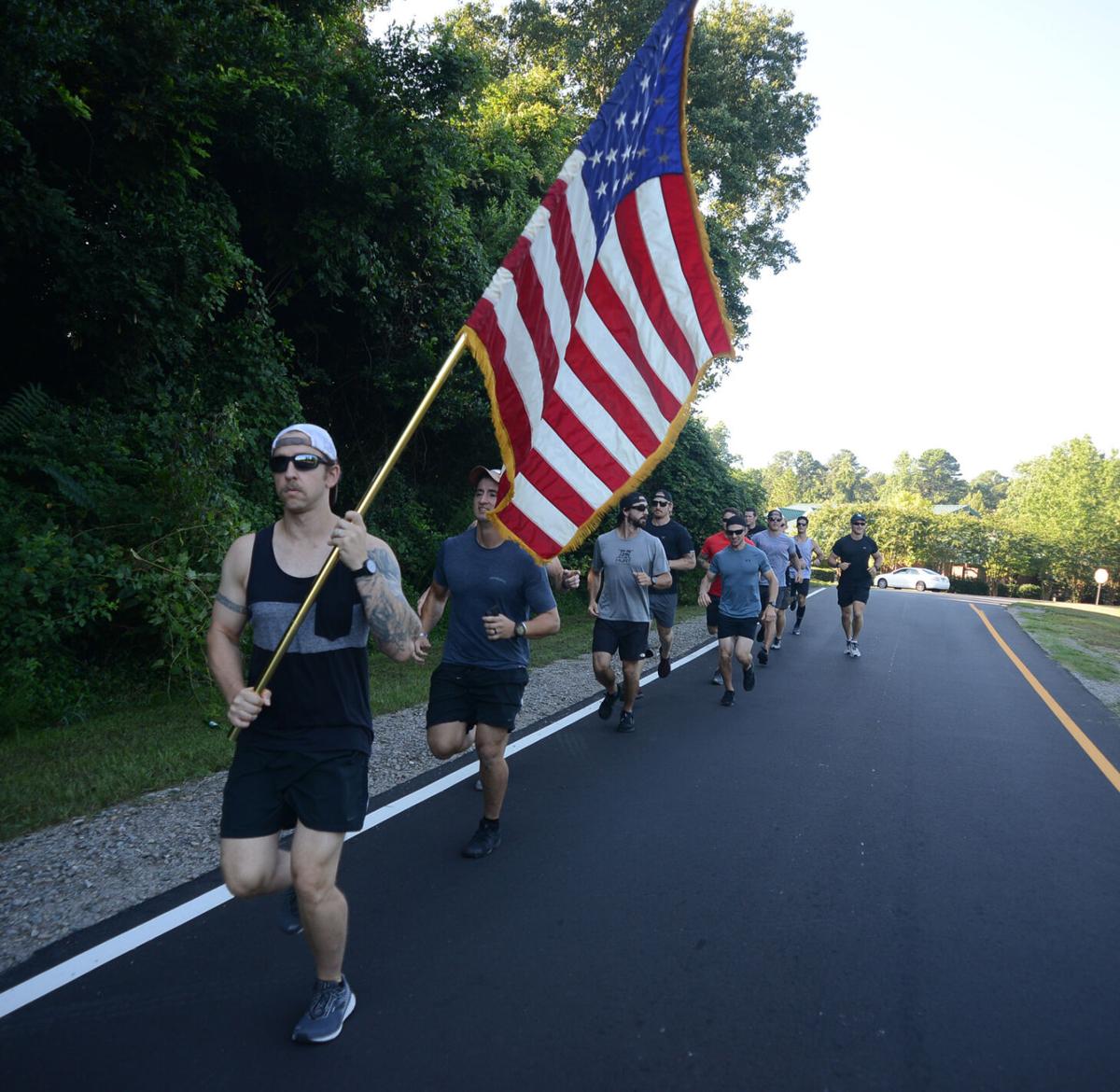 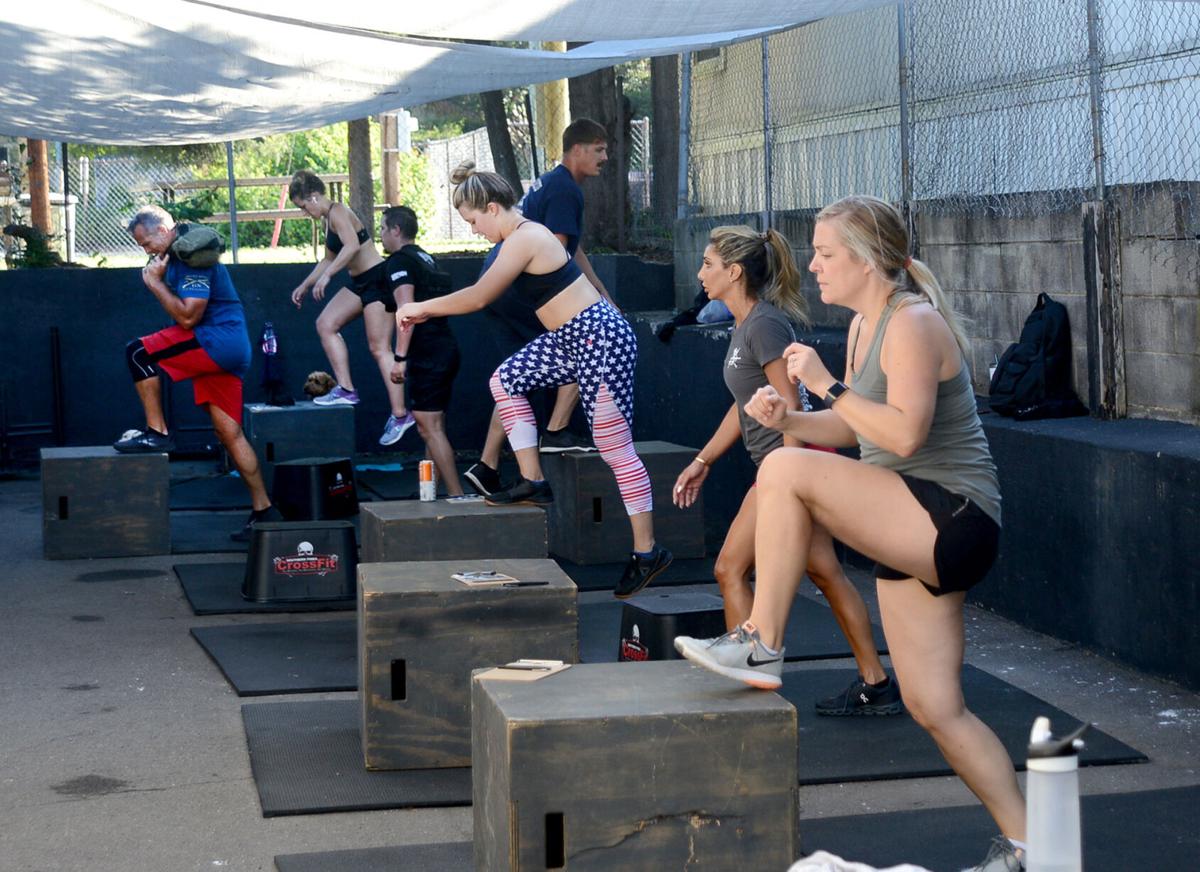 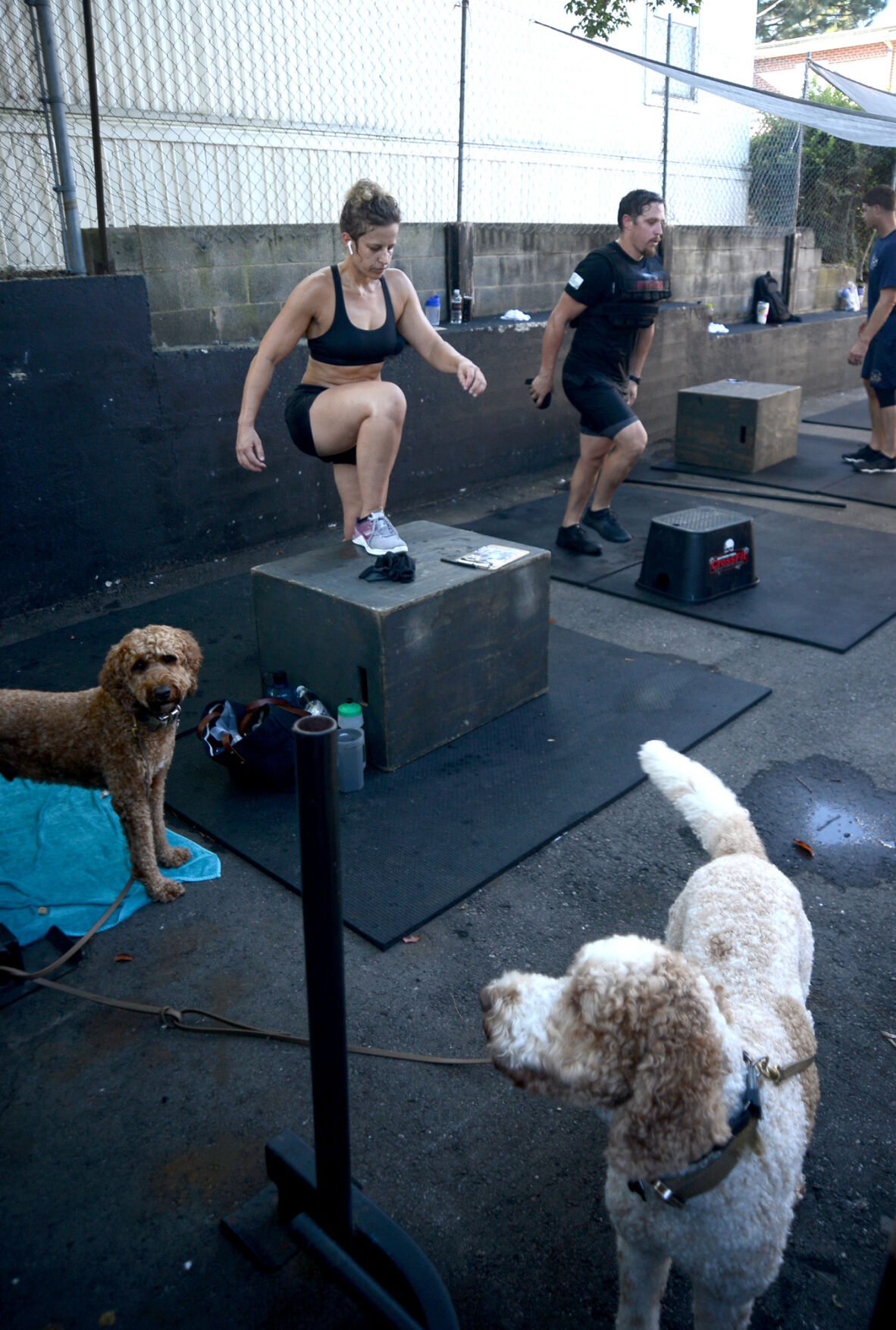 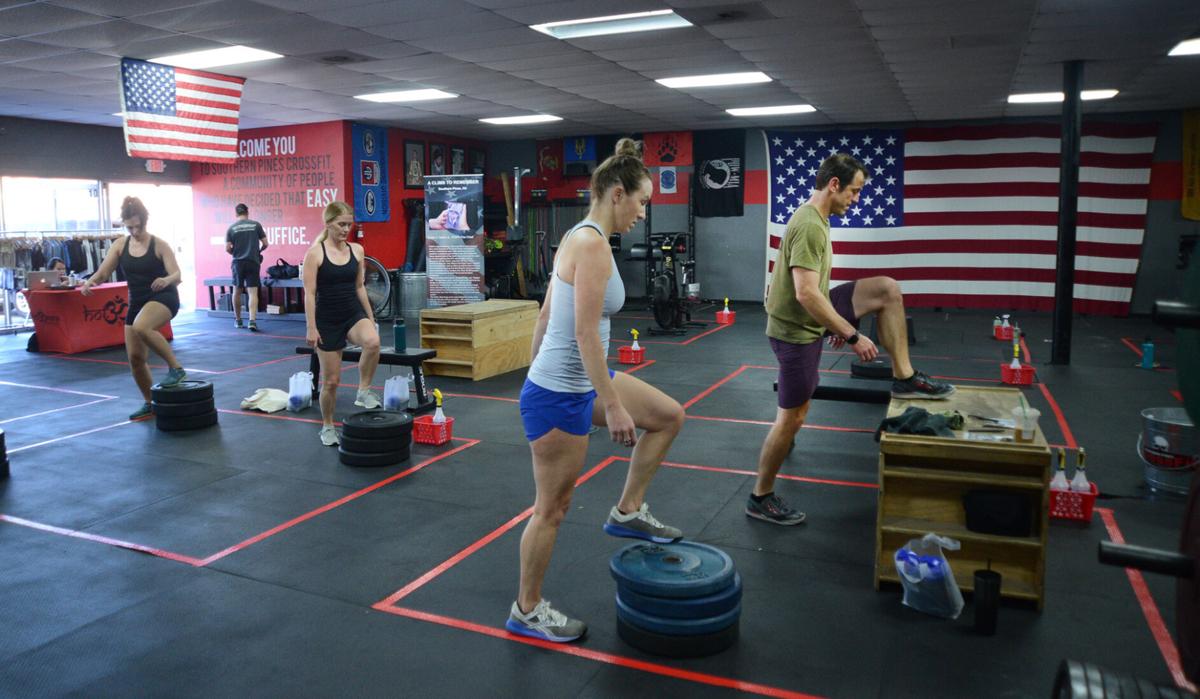 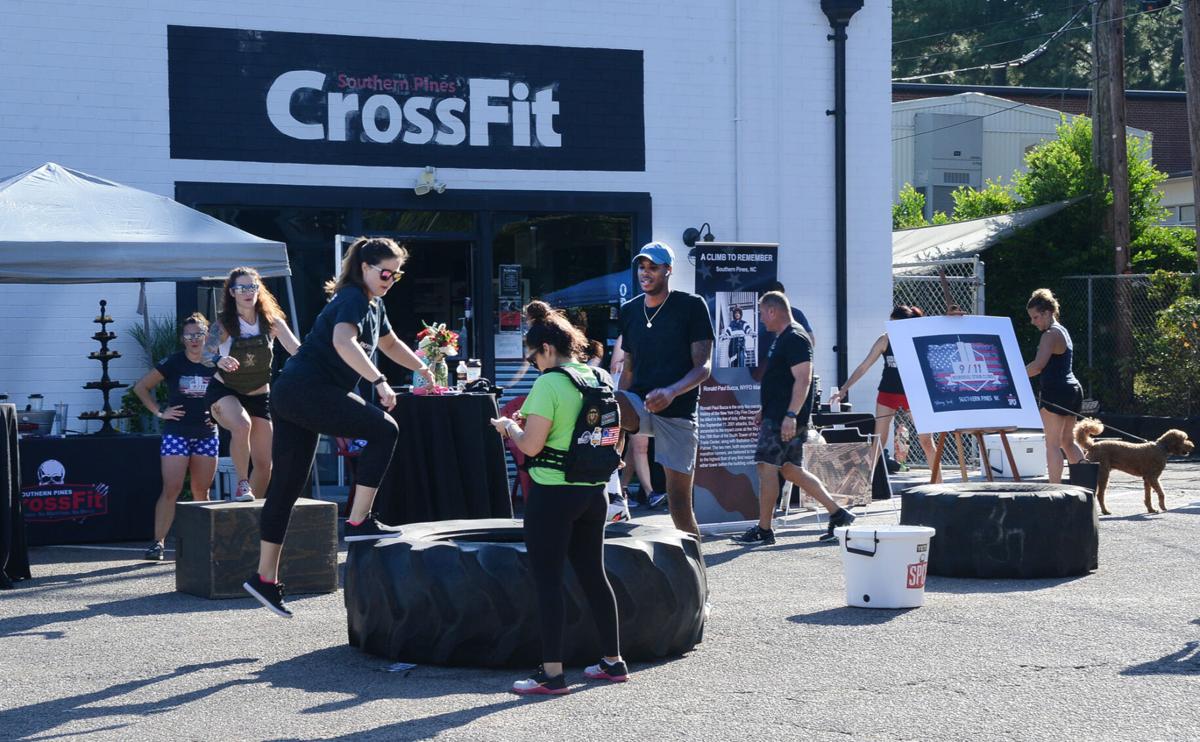 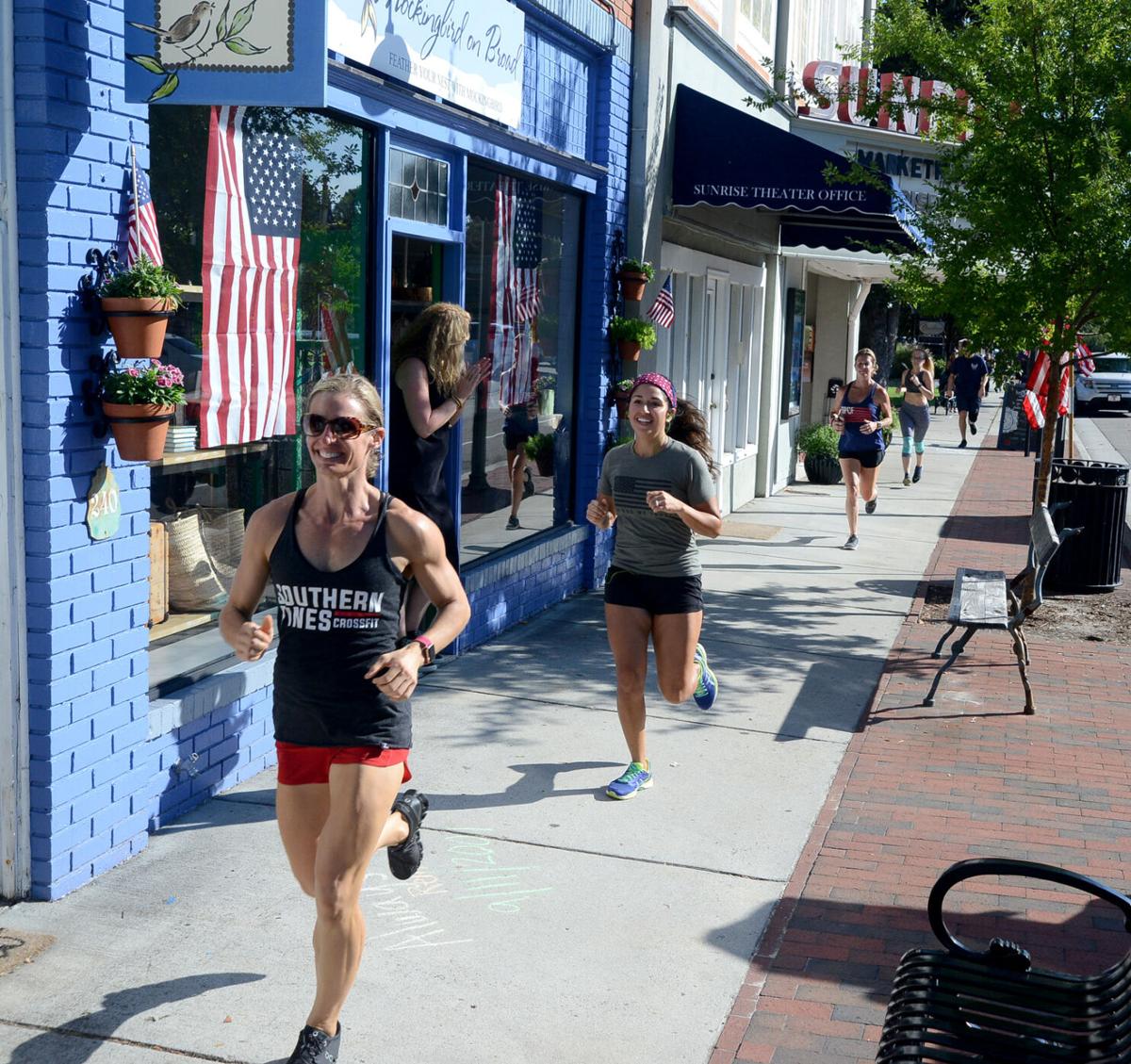 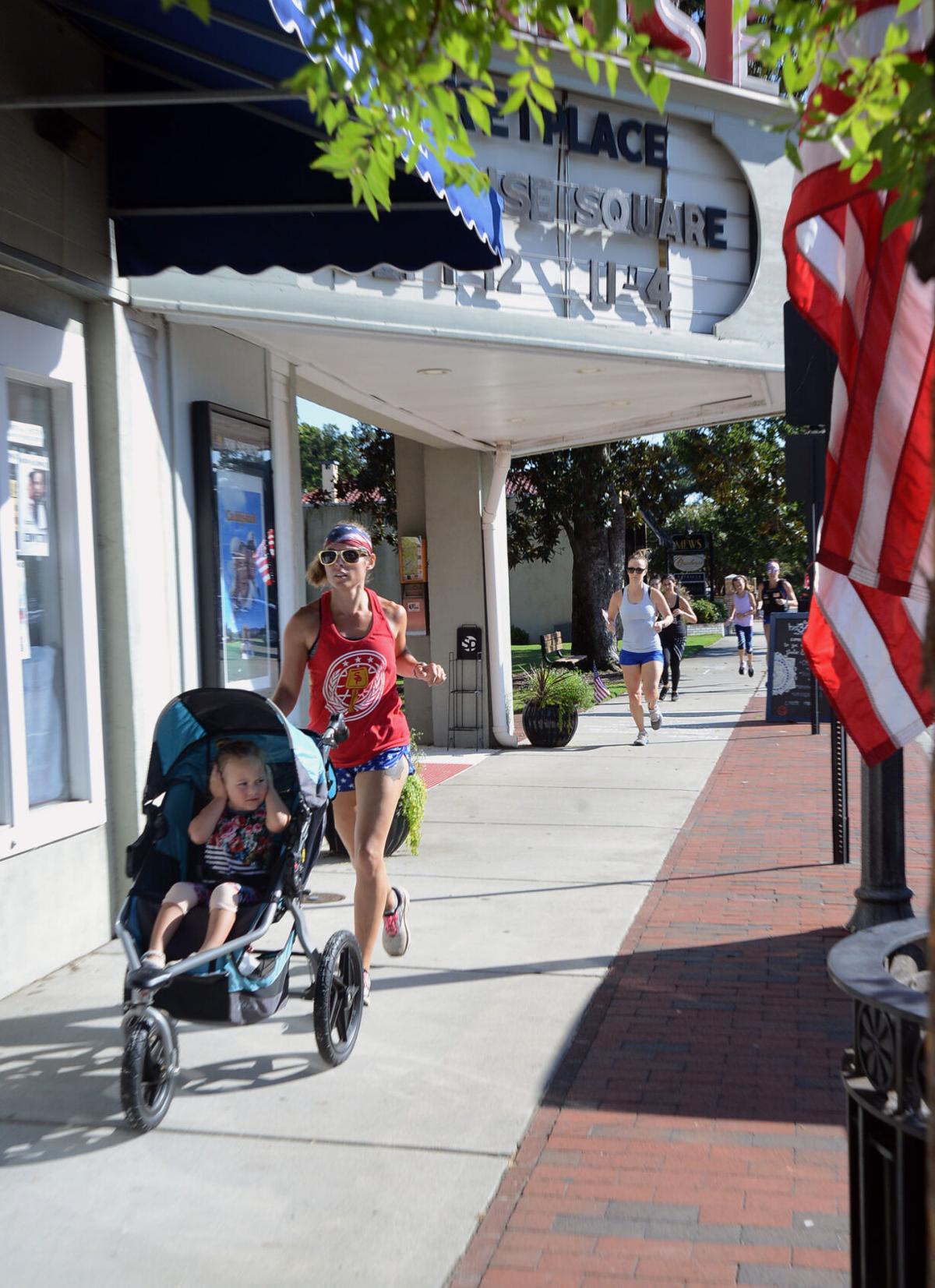 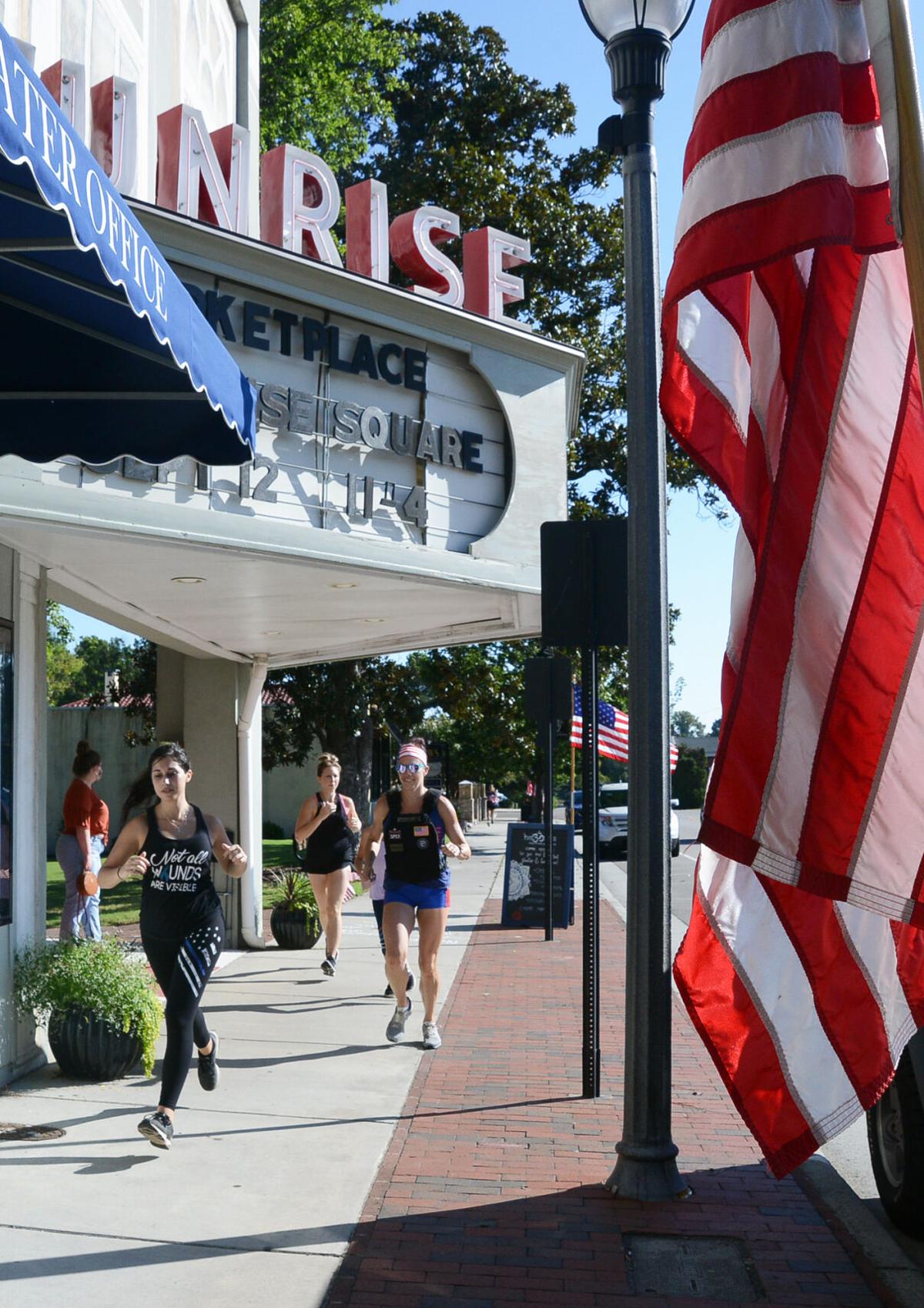 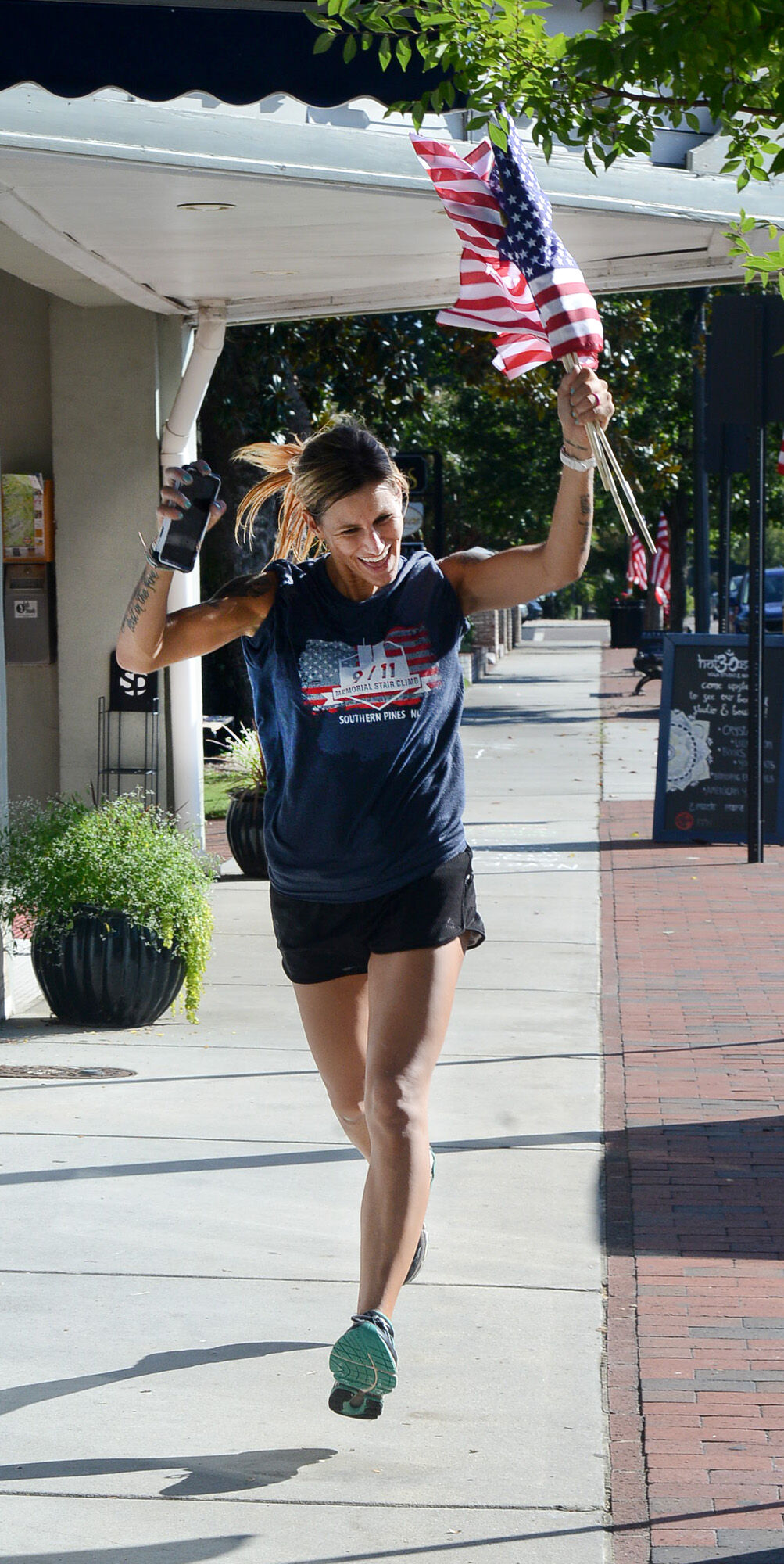 Strong Soul and Southern Pines Crossfit marked the 19th anniversary of 9/11 with a memorial stair-climb on Friday in downtown Southern Pines. Participants did multiple step-up exercises to simulate the experience of climbing the 110 floors of the World Trade Center. The event, which raised money for area fire departments, also included a 1.4-mile memorial run. (Photographs by Ted Fitzgerald/The Pilot)

L-r: Zac Sharpe and Matt Horner, both from the Aberdeen Fire Department and Nash Neptune SPFD

I believe the article was intended to honor those that lost lives, those that attempted to save lives, and the aftermath that ensued.

“We must gather to teach our children the importance of learning what occurred on September 11th, 2001, how it changed the lives of many and how it changed our country forever.” You going to tell them the whole story? How it was mostly Saudis who orchestrated the attack so we destroyed Iraq; not to mention Syria, Afghanistan, and Libya. That there is a lengthy history of the USA, Great Britain, France and others carving up and colonizing the Middle East? How we (the USA) have a history of manipulating and overthrowing democratically elected governments in the area? How our economic sanctions in the area have caused hundreds of thousands of children to suffer and die from malnutrition and disease? Are you going to lay out the development of the myriad police/military entities developed in the USA since 9/11 which curtail our so called constitutional rights? Or are you like G.H.W. Bush: “I’ll never apologize for the the United States of America, never, I don’t care what the facts are.” It is amazing. The USA is like the Emperor with no clothes; We just can’t or won’t see the truth. Or we are just evil. Bush’s statement is the epitome of evil.

You tell 'em Ken. Iraq, Afghanistan, Libya, Syria, and let us not leave out Iran, all democratically elected government rulers. We should use their example for elections. It seems we are headed in that direction, protest, rioting, looting and shooting, nothing more American than shooting a couple cops and then blocking the emergency entrance, shouting " hope you die pig ". Yep, that probably went a long way in resolving our current racial unrest.

Yea - "Let us not leave out Iran": The 1953 Iranian coup d'état, known in Iran as the 28 Mordad coup d'état (Persian: کودتای ۲۸ مرداد‎), was the overthrow of the democratically elected Prime Minister Mohammad Mosaddegh in favour of strengthening the monarchical rule of the Shah, Mohammad Reza Pahlavi on 19 August 1953,[5] orchestrated by the United States (under the name TPAJAX Project) " The Shah had a very suspect human rights record until he was ousted by the Iranian people. Almost finished with Piketty's book. He belabors a point he finds instructive: from 1950 to 1980 people with advance education, in all western countries, voted primarily for republicans (or their equal); from 1990 to 2020 that reversed and the more highly educated voted democratic. Piketty provides extensive research evidence purporting that prior to 1990 voting blocks were based on class divisions in society. Since 1990 he says both the Dem and Repub formed an elite which he calls the Brahmin left and the merchant right. The Brahmin left is an educated class and the merchant right is business/finance class. So really it is not left/right that is the problem, it is an elite center left and center right cabal who combine forces and present you and me with the facade of democratic choice. These elites don't care who wins because they always win. Look at the DNC. They risk running a mentally challenged man who no one wanted just to make sure things don't change. The DNC, without a doubt, would rather have Trump win another four years than run Sanders. Other than this Mark,, I appreciate as always your very astute comment.

Ken, you can forgo the history lesson, but if must, then you could at least get it right. You should read up on Mufti Amin al-Husseini and Otto Skorzeny, and the terrorism that they promoted. All these middle east terrorist groups have some connection to these two individuals still today. The Boston Marathon bombers were part of that culture. As for the " astute " comment, well that's just you being you.