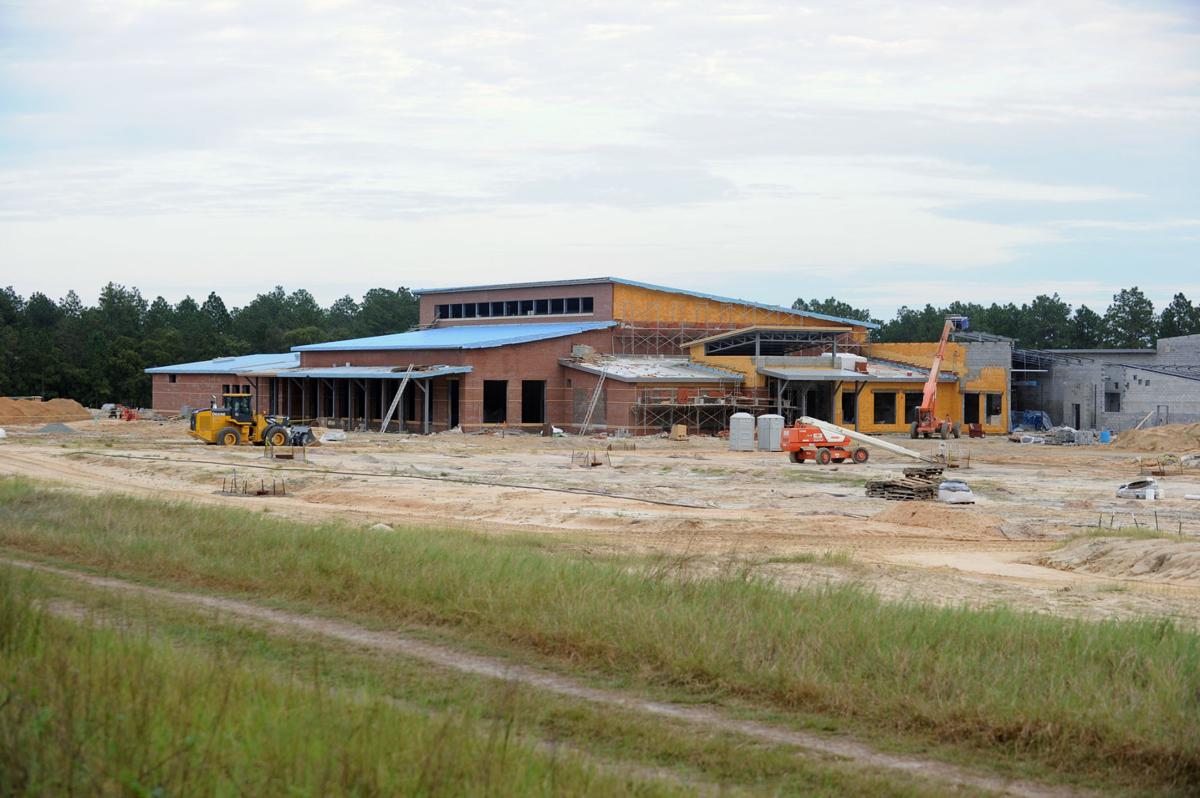 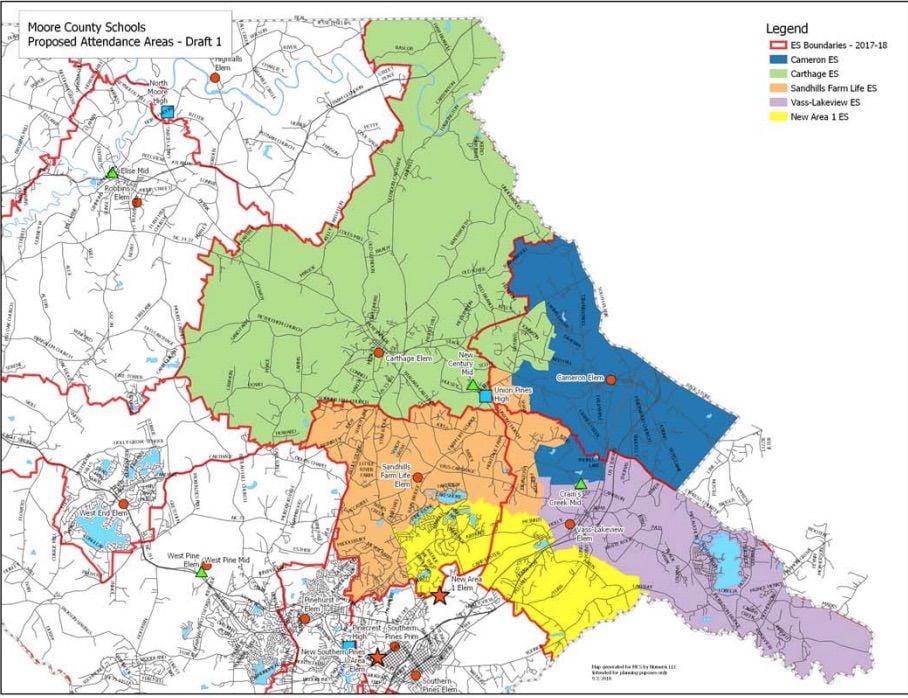 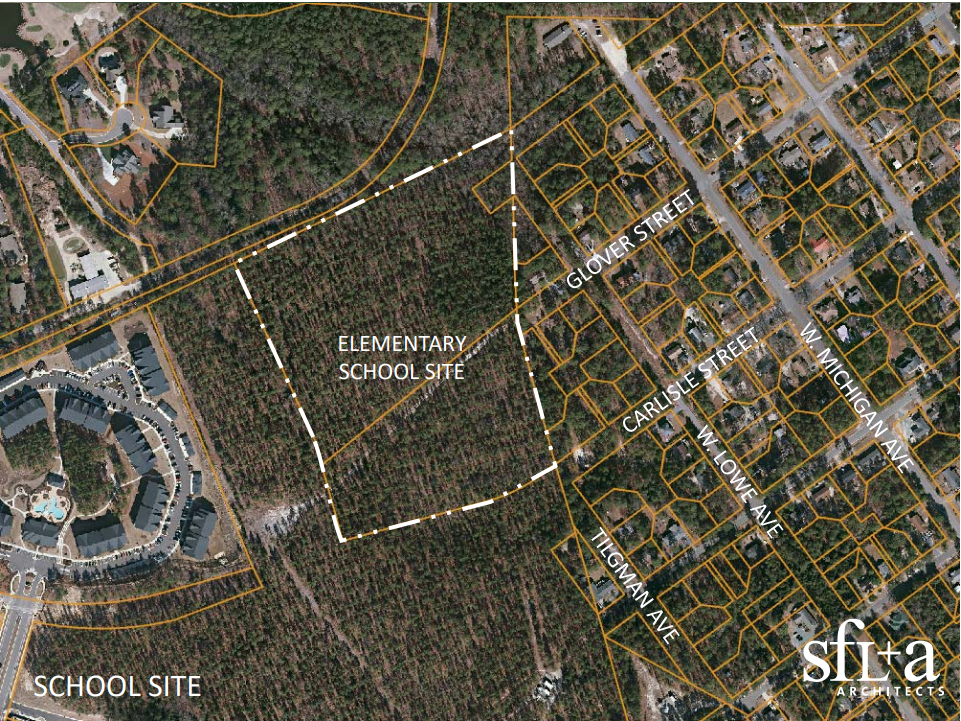 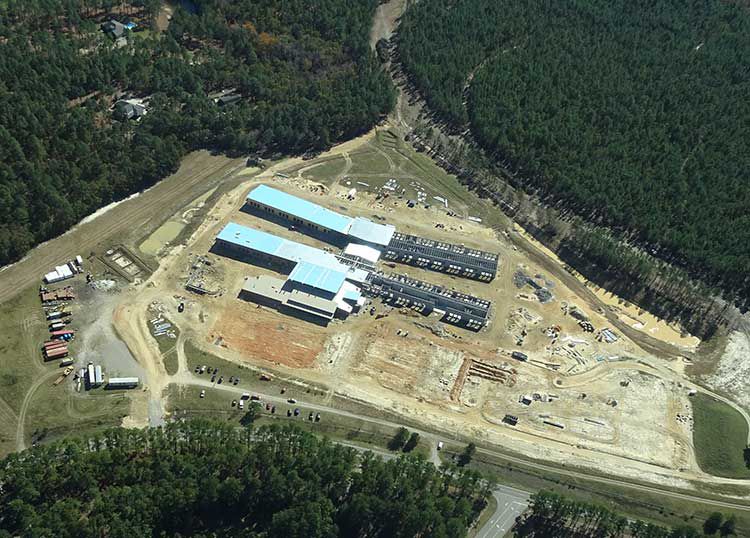 The new elementary school going up on Camp Easter Road in Southern Pines will draw students  from Farm Life and Vass-Lakeview elementary schools next year. Without the new school, both of those schools would struggle to accommodate growing student numbers associated with population growth in central and eastern Moore County.

The Moore County Board of Education is back at full strength and opening a year of weighty decisions about the series of new schools slated to open in the next few years.

The school board started its Monday work session swearing in three returning members, including at-large representatives Ed Dennison and Libby Carter, both incumbents re-elected to the board last month.

Pam Thompson returned to the board after winning the race to represent northern Moore County. Thompson, who previously served on the board from 2006-2010 and 2015-2016, will fill the seat vacated earlier this year with the death of longtime board member Charles Lambert.

Opening the meeting, the seven-member board unanimously re-elected Helena Wallin-Miller as chair and Libby Carter as vice-chair before looking at a series of decisions that remain to be made about the new elementary school Moore County Schools will, six months from now, be preparing to open.

That 800-student school has been under construction since this past spring on Camp Easter Road, where it is positioned to serve a growing population in Whispering Pines, Vass and Southern Pines’ northern outskirts.

Next week, the school board is expected to end the months-long processes of designating that school’s name and attendance area for the 2019-2020 school year.

The board reviewed the public response to a list of five proposed names on Monday. Over the last few months, the schools received 108 suggestions through an online form and narrowed that list down to five: Camp Easter, Fairway, McDeeds Creek, Piney Woods and Pine Meadow.

In another round of input, the district put those five names up for critique online as well. Respondents had the option to indicate support for each name, and offer a comment on each one. More than 450 people responded to that survey.

“The idea was that it was not necessarily a vote, but it was more just to get a sense for what the support was for any of these names and to identify if there was anything that we’ve missed,” said Wallin-Miller.

Of the five, “Camp Easter Elementary” had the highest approval rating with 60 percent of respondents supporting it. The rest received positive responses from less than half of those who took the survey.

The board is scheduled to vote on the school’s new name on Monday, as well as the attendance plan it has been refining since this summer.

As proposed, the Camp Easter Road school would absorb students from the Sandhills Farm Life and Vass-Lakeview schools when it opens in August. Alleviating crowding at those two schools has been the district’s stated goal since well before the new school was even funded.

Throughout the redistricting process, the board has considered tweaking the Carthage and Cameron elementary schools’ attendance zones to pull students there from Farm Life and Vass-Lakeview as well. But after feedback from families who pointed out that those schools will likely have to deal with growth themselves in the longer term, school officials narrowed the focus of the plan for the 2019-2020 school year.

“This process has been very thorough and has included a lot of public input, so I appreciate all the work that you have done to bring transparency to this process,” Wallin-Miller said.

If those numbers hold true, both existing schools will be within their designed capacity: 550 at Farm Life and 600 at Vass-Lakeview.

The new school, which is designed to serve 800 students, will have about 540 next year with projected growth in the area factored in.

Over the next year though, Moore County Schools will continue evaluating attendance lines in that area as the district plans to open new schools in Southern Pines and Aberdeen in 2020. As it stands, some areas now in the Sandhills Farm Life attendance area could ultimately be moved either to the new Southern Pines school or to the one on Camp Easter Road.

“I think the due diligence that has been done to ensure that families and children only move one time has been great,” said Thompson.

In other business Monday, the board reviewed an agreement for improvements to Camp Easter Road near the new school’s campus.

N.C. Department of Transportation studies have indicated that increased traffic associated with the school will necessitate turn lanes on Camp Easter — at the spine road that will lead to the school’s entrance and onto property owned by the Bell Family as Knollwood Partners, LLC, as well as at the intersection with Niagara-Carthage Road and at Fairway Drive and N.C. 22.

With Knollwood planning to build 130 homes on property adjacent to the new school campus, those upgrades escalate to a roundabout where the spine road and the west entrance to St. John Paul II Catholic School meet Camp Easter.

That development is the first phase of extensive plans to develop the 550 acres between Camp Easter Road and U.S. 1. Knollwood donated most — 34 of 39 acres — of the land for the new elementary school to Moore County Schools last year, leaving the schools to pay $200,000 for the other five acres.

“It did not make sense to anybody involved at that time, including DOT, for us to build the turn lanes and within a few months for the developer to tear it all up and build a roundabout,” said John Birath, Moore County Schools’ director of operations.

With a roundabout at Camp Easter Road, the road improvement package is expected to cost $900,000.

Though the county will shoulder the entire cost of that project initially, Knollwood has agreed to reimburse $440,000 of that, which represents the difference between the total cost and the $460,000 cost of the turn lanes necessitated by the school alone.

The school board is expected to approve that agreement on Monday, after which the district will proceed to open bids for contractors to install the roundabout and turn lanes. June 15, 2019 is the target date for completion.

Ultimately, DOT is responsible for the cost of roadway improvements associated with schools.

“Once all the improvements are completed and accepted by DOT, we will receive back the $460,000,” Birath said.