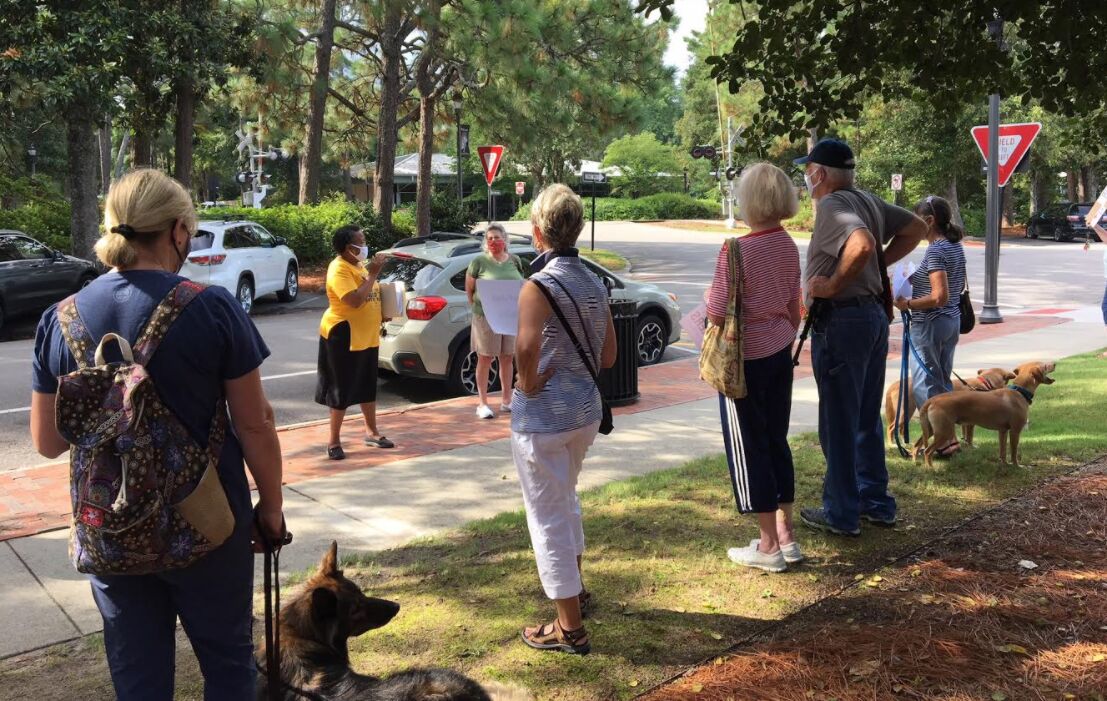 O'Linda Watkins, in yellow shirt, with Moore County NAACP addresses a group of demonstrators during the Save The Post Office rally in downtown Southern Pines on Aug. 22, 2020.  Laura Douglass/The Pilot 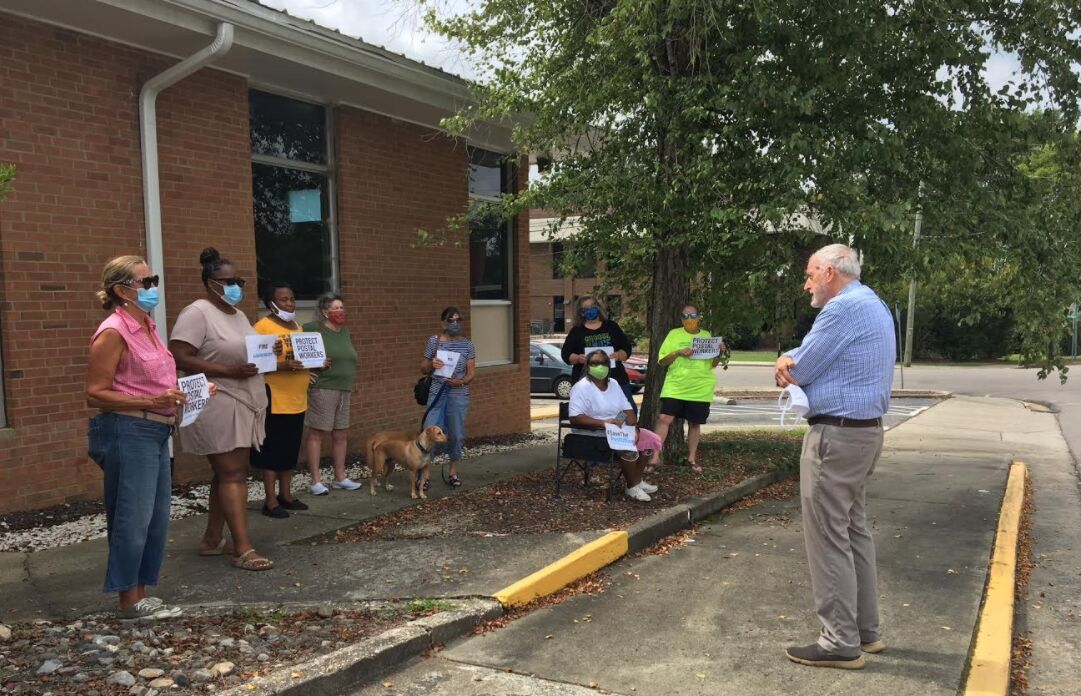 Al McSurely speaks to supporters outside the Carthage Post Office on Saturday during a Save the Post Office rally.  Laura Douglass/The Pilot

Peaceful demonstrations were held in Southern Pines and Carthage on Saturday morning to protest actions by newly appointed Postmaster General Louis DeJoy that could impact the upcoming federal election.

Organized by Moore County NAACP and Indivisible of Moore County as part of a national call to action, the assembled groups derided operational changes, including the dismantling of mail sorting machines, that have caused postal delays.

“We would like a free and fair election and that includes voting by mail,” said Debby McGovern, representing Indivisible of Moore County.

DeJoy, who resides in North Carolina, was appointed to lead the U.S. Postal Service by its Board of Governors earlier this year. Considered a Republican “mega donor,” DeJoy’s financial interests have drawn fire. According to government records, the former CEO of New Breed Logistics, and his wife, Aldona Wos, a former N.C. Secretary of Health and Human Services, may claim up to $75 million in assets from U.S. Postal Service competitors.

Lawsuits have been filed against the U.S.P.S. by attorney generals from at least 20 states, according to a recent Forbes report. In addition, DeJoy was called to testify before the Senate Homeland Security and Government Affairs Committee on Friday and is expected to meet with the House Oversight Committee on Monday.

Last week DeJoy announced an expansion of the current leadership taskforce on election mail "to enhance our ongoing work and partnership with state and local election officials in jurisdictions throughout the country...Because of the unprecedented demands of the 2020 election, this taskforce will help ensure that election officials and voters are well informed and fully supported by the Postal Service."

He noted that some "reforms" would be suspended until after the election to avoid even the appearance of impact on the election; however, DeJoy stopped short of agreeing to return the dismantled sorting machines to use.

“We want full funding of our post offices,” McGovern said. “We want every vote counted.”

O’Linda Watkins of the Moore County NAACP said the operational changes have impacted mail delivery at an especially crucial time because of COVID-19. She noted the NAACP also recently filed suit in the U.S. District Court of Washington, D.C. against the U.S.P.S. changes.

“We need to support a beloved system that every American relies on,” Watkins said. “In this pandemic, mail is how many of us will deliver our democracy.”

Civil rights attorney, Alan McSurely, spoke of Benjamin Franklin, the nation’s first Postmaster General, and the U.S. Constitution that provides for a postal operation “to bind the nation together.”

“Public schools must serve every child. The same is true for the post office. It is there to serve everybody,” McSurely said.

Watkins said voters should decide now how they intend to vote, whether in-person, at an early voting site, or by mail. Absentee ballots may be requested between now and Oct. 27, and will be available starting Sept. 4. Download a request form from the Moore County Board of Elections website at https://www.moorecountync.gov/board-of-elections or call (910) 947-3868.

Absentee ballots must be completed in the presence of a witness. The envelope may be mailed or delivered in person by the voter or a relative of the voter to the county board of elections office or to an early voting site.

“If you plan to vote by mail, you need to request an absentee ballot. And when you receive it, return it as soon as possible,” said Watkins.

If it is unsafe to vote in person, shouldn’t these people have done a mail-in protest?

Thanks to Yankee immigrants in our area we’re getting Yankee-style taxes. These same people want Yankee-style elections - fraudulent. Matt Vespa reports: “NJ Election Invalidated over Rampant Voter Fraud...Which I Was Told Doesn't Happen in the US“

"Moore County NAACP said the operational changes have impacted mail delivery"...does Ms O’Linda Watkins of the Moore County NAACP have data that supports her assertions or is she taking points from NAACP and DNC leadership? The fact is, the USPS has lost billions over the previous 10 years and is another bloated federal bureaucracy that is in need of bottom-up overhaul.

My mailbox remains full of junk mail. Somehow that flood of paperwork always gets through. This is just another fabricated non-crisis. If losses can’t be stopped at the USPS it ought to be shut down. The private sector can already do this far better, see UPS and Fedex. There is no reason to guarantee everyone daily deliver of junk mail to their doorstep. In Ben Franklin’s time this sure wasn’t the case.

Let me get this straight. The NAACP is fine with defunding and denigrating law enforcement, but believes the government should throw even more money at postal services? Brilliant.

It appears that the dogs outnumber the protesters in this picture.

The USPS has lost billions annually for many years. It’s about time that we finally had someone in charge to clean up this mess. We do not elect people by mail. The few recent instances where this has been done has ended in chaos. Democrats are flailing around in their desperate attempts to prevent a fair election and Shutdown Cooper in office. Their useful idiot supporters are always ready to protest and smash windows.

Kent The Pilot/Pinehurst Pinocchio doesn't understand 1) the completely unique accounting system forced on the USPS by Congress, otherwise it would actually run at a positive net, worse, 2) he apparently doesn't know or care about Article I, Section 8, Clause 7 of the U. S. Constitution which empowers Congress to establish post offices as post roads and 3) doesn't know or care that ordinary, bone-weary, underappreciated, working class, middle class Americans are sick and tired of the kind of lies and uninformed unoriginal nonsense he spouts.

So Dan, what is your solution to the postal mess? I really appreciate my local postal workers - they work hard every single day except Sundays. Unfortunately, they are burdened with an unsustainable "people cost" problem, similar to older rust belt industries that have gone bankrupt. I'll clue you in - throwing money at the problem is not the solution.

Dan, you at least make sense. As for Kent, I am a Yankee that has moved down here. I have been here 16years. Most of us who moved down here, didn't like what was going on up north and certainly haven't brought those ideas with us. Shows how simple minded you really are. As for junk mail, those companies pay to send that junk mail. While you sit here spewing your nonsense, people at the post office are obligated to deliver what is sent in the mail whether you like what you get in your mail box or not is immaterial.