The Robbins Board of Commissioners recently adopted an updated noise ordinance that town officials hope will be more enforceable than what was previously on the books.

Approved during the commissioners’ regular meeting on May 14, the modified ordinance contains a subsection forbidding the use of any “automobile, motorcycle or other vehicle so out of repair, altered, maintained or operated in such a manner as to create unreasonably loud, disturbing or unnecessary noise.” The subsection goes on to list several restrictions related to vehicles with loud mufflers.

Violators may receive a written warning, followed by citations with fees ranging from $100 to $500 for subsequent violations reported within the same year. Failure to pay a fine within 10 days “shall subject the offender to an additional $75 delinquency charge,” according to the ordinance.

John Barlow, the interim town manager, said many residents have complained about excessive noise, but the old ordinance left the Robbins Police Department with little recourse.

“It didn’t give law enforcement any leverage to take any action if there was a noise violation,” Barlow said in a phone interview on Tuesday. “It was sort of toothless, so the town commissioners felt they needed to give the police chief a better tool to work with.”

Barlow said the ordinance will not affect events like Farmers Day, the town’s annual outdoor festival. Much of the decree is nearly identical to noise ordinances that have been in place for years in other municipalities across Moore County.

Still, a post on the town’s Facebook page announcing the updated ordinance was met with dozens of disapproving comments from residents, with multiple people criticizing the vehicle-related restrictions and accusing Robbins of trying to emulate larger municipalities like Pinehurst. Barlow said he had not read the comments as of Tuesday afternoon.

Click the image below to read the updated noise ordinance. 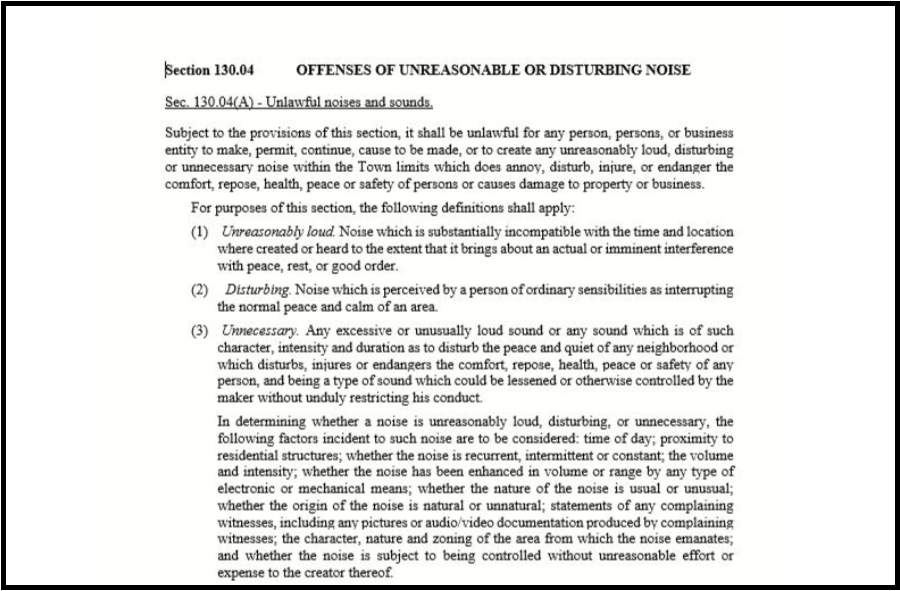 Sounds like another subjective ordinance. It doesn't contain any real measurable criteria other than the LEOs ear or like or dislike for the alleged offender.