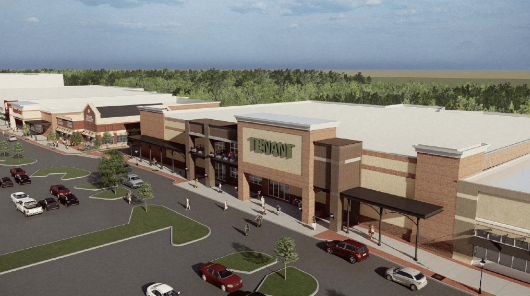 The Florida-based grocer Publix has expanded its footprint broadly in North Carolina, but attempts over the last few years to bag a Moore County location have stayed on the shelf.

That could soon be changing. According to architectural plans reviewed by the Southern Pines Town Council this past week, Publix may now be eyeing space near the proposed Target store in the Morganton Park South development.

Town leaders considered an architectural compliance permit request on Wednesday for a 221,000 square foot “open air” retail development. The 35-acre tract is part of the larger conceptual development plan unanimously approved in September for the 100-acre parcel stretching between U.S. 15-501 and Morganton Road.

He noted the new shopping center in the Morganton Park South development will be “bookended” on both sides by tall clock towers, and incorporate a number of architectural design details “leveraged” from downtown Southern Pines. Numerous outdoor gathering spaces with trellises and water features connect to sidewalks and a greenway path along the proposed four-lane parkway between U.S. 15-501 to encourage pedestrian connectivity.

“In today’s retail, you have to offer more than brick and mortar to compete with online sales. You give people a reason to be here and stay here. It is a lifestyle center,” Kuch said, noting the shopping center incorporates architectural details seen around downtown Southern Pines.

He did not identify Publix by name but said the plaza’s second largest tenant space (adjacent to Target) would likely be a grocery store.

Publix unveiled a new 48,000-square-foot store last year in Tampa that featured a second-floor mezzanine and patio dining area above the entrance. The new layout which also includes a central deli and dedicated area where customers can pick up meal kits has been repeated at a number of new locations opened in 2021.

“At this time we have no information to share,” Jared Glover, a media relations manager for Publix regional offices in Charlotte, said in an email to The Pilot Thursday morning.

Over the last decade, Publix has eyed several potential locations around Moore County. At one point, the company had approached Pinehurst about buying land at Cannon Park on N.C. 211 for a store but was rebuffed.

In 2016, conceptual plans for a shopping center that was purportedly to be anchored by Publix on land between U.S. 15-501 and Morganton Road, near Voit Gilmore Lane drew considerable opposition from neighboring residents in The Country Club of North Carolina community. Eventually those plans were also called off and the same tract of land has since been developed into the 288-unit Eagle Landing apartment complex.

More recently, plans were submitted to Moore County for a proposed shopping center on U.S. 15-501 north of Pinehurst, near the intersection of Juniper Lake Road. The rezoning request for this project was pulled before county leaders could weigh in, but a preliminary sketch reviewed by local officials indicated a Publix store was expected to anchor the proposed development.

Publix: We Don’t Have a Moore Site

Florida-based Publix says it does not have plans for a grocery store in Moore County right now.

Site of Proposed Publix Believed to be on the Market

In a signal that a possible grocer-anchored shopping center might not happen soon, a 31-acre…

Not sure we need another grocery store but we could use a Home Depo to help keep prices reasonable and to give us more choices for appliances and home decorating areas.

They make great subs. Competition is good for the consumer.

isles are stocked with the same names...the only diff is they wear green shirts. They also make the worst choc chip cookie in the world...the worst. I've been in them in Florida and they are dirty, crowded, and slow...cannot imagine that they have anything to offer that is one iota diff than what is here already.

Publix can stay in FL. How about courting a Trader Joe's or a Whole Foods? I'm Celiac and it's a bummer to have to drive so far to find a bigger selection of safe foods. I am sure that there are many others with food restrictions in this area that would benefit from better food choices vs the limited selections available locally.