The $115.7 million general fund budget, which covers most county operations, amounts to a 1.5 percent increase over the current fiscal year. It keeps the property tax rate unchanged at 51 cents for each $100 of value.

The advanced life support tax to support the county's emergency medical system, paid by all county property owners, would remain at 4 cents.

The fire service tax also would remain unchanged for the second year at 9.5 cents. That tax is paid by those living in unincorporated areas.

But there are increases, most notably in landfill fees as well as water and sewer rates.

Vest previewed the budget earlier this month, minus any recommendation on education funding. Tuesday’s budget includes $31.85 million for operating costs, capital projects and digital purchases. The school board had requested $36.1 million, a $3.46 million increase over this year.

The school board sought more money to help cover cost increases such as teacher raises and more K-3 teachers for state-mandated class size reductions. The district also wanted to increase pay for school support staff and hire several additional teachers to bring down student-teacher ratios in fourth and fifth grades.

Vest said the school district can still do all those things; the school board has “full discretion over how to divide up” county funding, he told commissioners. He also noted that the commissioners approved transferring $2.1 million from its capital reserve funds to the schools for capital needs and deferred maintenance projects in March.

Vest said when $17.8 million in debt service for construction projects is factored in, the county is spending $49.66 million on schools.

Vest said more than 90 percent of the county’s $19.7 million debt service payments next year are for the schools and community college.

At the outset, Vest said the county’s guiding budget priorities centered on education, public safety and public health. Combined, they account for more than 77.5 percent of the total general fund budget.

As a result of the coronavirus crisis, the county is expecting to see a $3.2 million reduction in sales tax revenues next year. Even with a projected $1.4 million increase in property tax revenues — based on 2 percent growth in the tax base — the county will still be in the hole by $1.7 million. A penny on the tax rate generates about $1.37 million.

All that comes as the county faces increasing costs of providing various services. Some of those higher costs will be offset by higher fees on services such as disposal of household trash, recyclables, yard debris, and construction and demolition debris at the county landfill.

Commissioners last year voted to increase the property tax rate by 4.5 cents, the first hike in a decade. It came on top of the revaluation in which most people saw their values rise, resulting in higher tax bills.

The proposed budget for next year includes 10 additional detention center officers requested by Sheriff Ronnie Fields as part of a plan to renovate space in the newest section of the old jail. Vest said the county expects to cover most of the costs for the new officers through fees paid by the state to house inmates serving sentences for misdemeanors in county jails rather than prisons, which is less costly.

The budget does not include cost-of-living or merit pay raises for county employees.

In separate budget line items, the county includes $1.25 million for the Convention and Visitors Bureau, which comes from a 3 percent hotel room occupancy tax.

Vest said the budget projects a half-million dollar decrease in revenues for CVB next year as a result of the coronavirus crisis. The bulk of the room tax funds marketing efforts.

Increases in water and sewer rates are intended to cover the increasing cost of providing services as well as some expansion projects. Those are funded solely by rates paid by users, not property tax dollars.

Vest said the $5 million Vass sewer expansion project and a $2.54 million project to extend water service to 111 homes in the Eastwood area are continuing. The county received federal grants and loans to finance the projects.

One of the biggest looming expenses for the county is a new courthouse in Carthage. Vest reported that the Carthage town board on Monday night gave final approval to closing one block of Dowd Street to make more room for a courthouse expansion project, clearing the way for architects to complete the final design.

He said the county has identified a revenue stream to provide $35 million in funding for the new courthouse. The county is building up a capital fund to cover the cost, and the proposed budget transfers another $2.7 million from its capital reserves to the courthouse project fund next year.

Click the image below to read the full proposed budget: 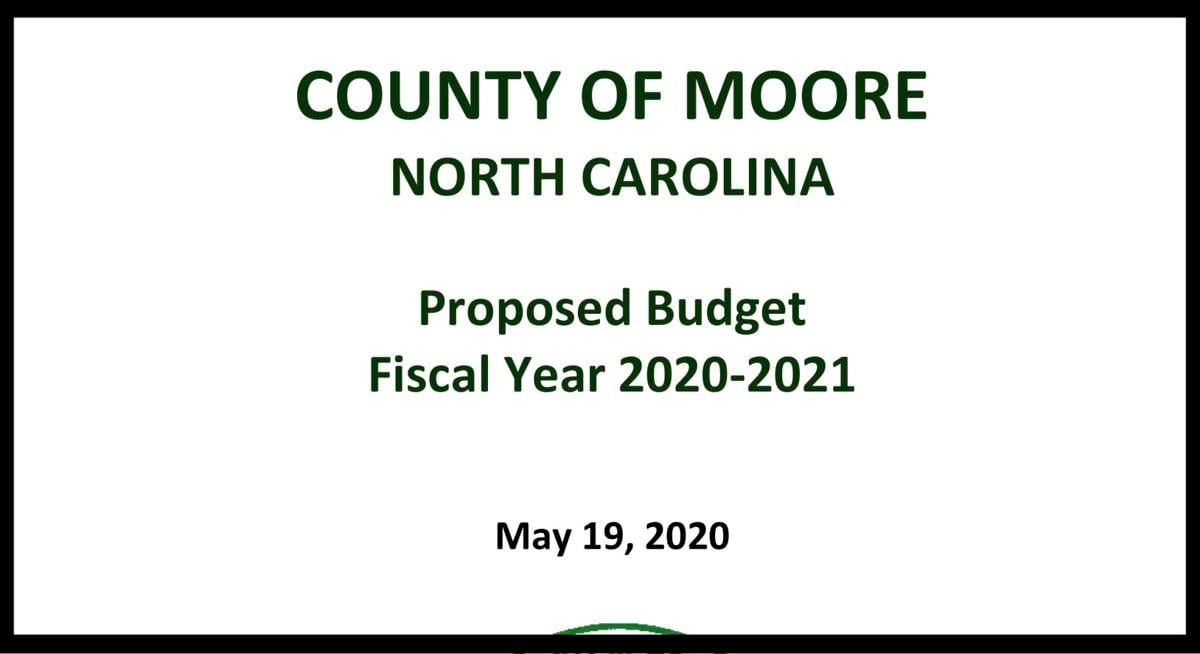 After presenting the budget, Vest said the commissioners can hold additional work sessions. The board voted to hold a public hearing during its June 16 meeting. Under new state law that allows local elected boards to meet remotely and conduct public hearings electronically, they must wait at least 24 hours before voting. The board has until June 30, the end of the fiscal year, to adopt a budget.

Vest said the county will continue to monitor the impacts of the COVID-19 crisis on revenues and expenses going into the next fiscal year.

Commissioner Louis Gregory thanked Vest and the budget team for its “hard work” on the proposal.

“I look forward to hearing from the public now as to their thoughts,” he said, “and when it comes time for our work sessions, if in fact we need to add another work session to hear from all the public as to what they believe that needs to be done with their taxpayer money.”

Also during the meeting, commissioners voted to apply for $1.89 million in Coronavirus Relief Funds through the N.C. Office of Budget and Management. Each county receives a base allocation of $250,000, with the remainder based on population, according to county internal auditor Tami Golden.

Golden said the federal CARES Act (Coronavirus Aid, Relief and Economic Security) passed by Congress on March 27 allocated $4 billion to North Carolina. The initial allocation appropriates $150 million to counties. Another $150 million is being held in reserve with the state until the federal government releases it, she said.

Money from this fund can cover expenses related to this new public health emergency that were not accounted for in the current budget. Such expenses include medical, public health, payroll and other related needs.

In a county with an economy lopsided towards retail and recreation, Commissioners need to expect the worst regarding tax revenue. Not included is the loss of property taxes when businesses close and homeowners are foreclosed on mortgages. This is sure to happen. We need an emergency budget that would require across-the-board cuts in spending and not a penny of new taxes. If anything, taxes should be reduced as this always leads to economic growth and eventually to higher tax revenues. Remember that over 25% of MCS employees are not teachers. Many in the central staff are highly paid but are they really essential in time of a fiscal crisis? I doubt it.

I'd suggest that legislation be enacted that would enable district voters to vote on annual school budgets rather than only 5 Commissioners. John Misiaszek