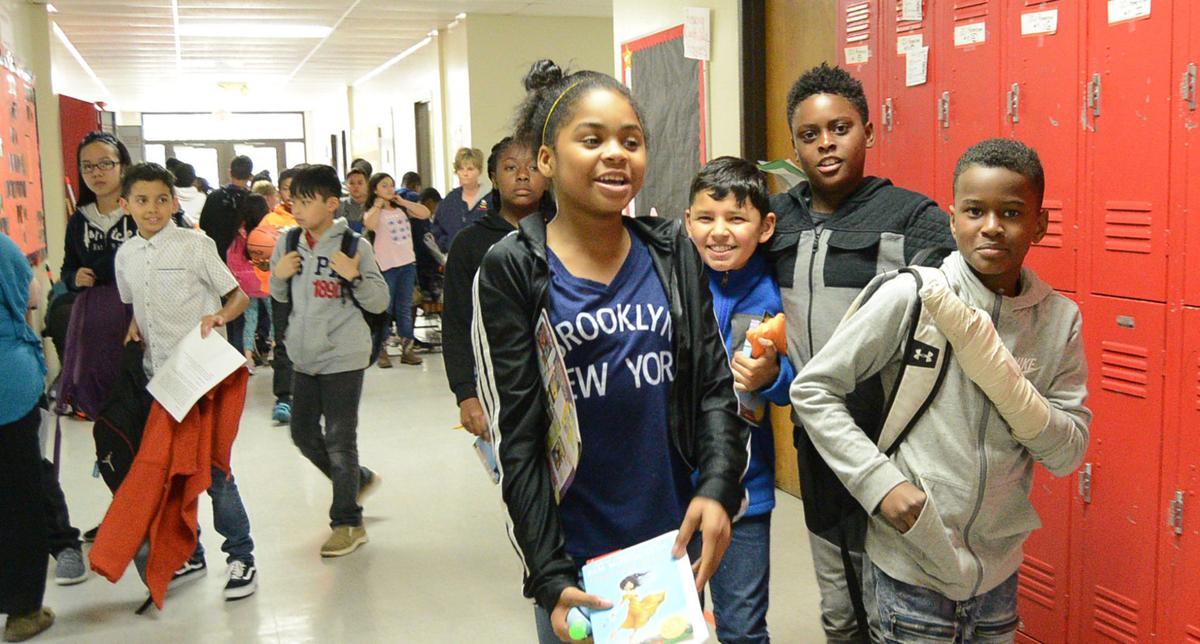 Students at the old Aberdeen Elementary School in 2018. (Photograph by Ted Fitzgerald/The Pilot) 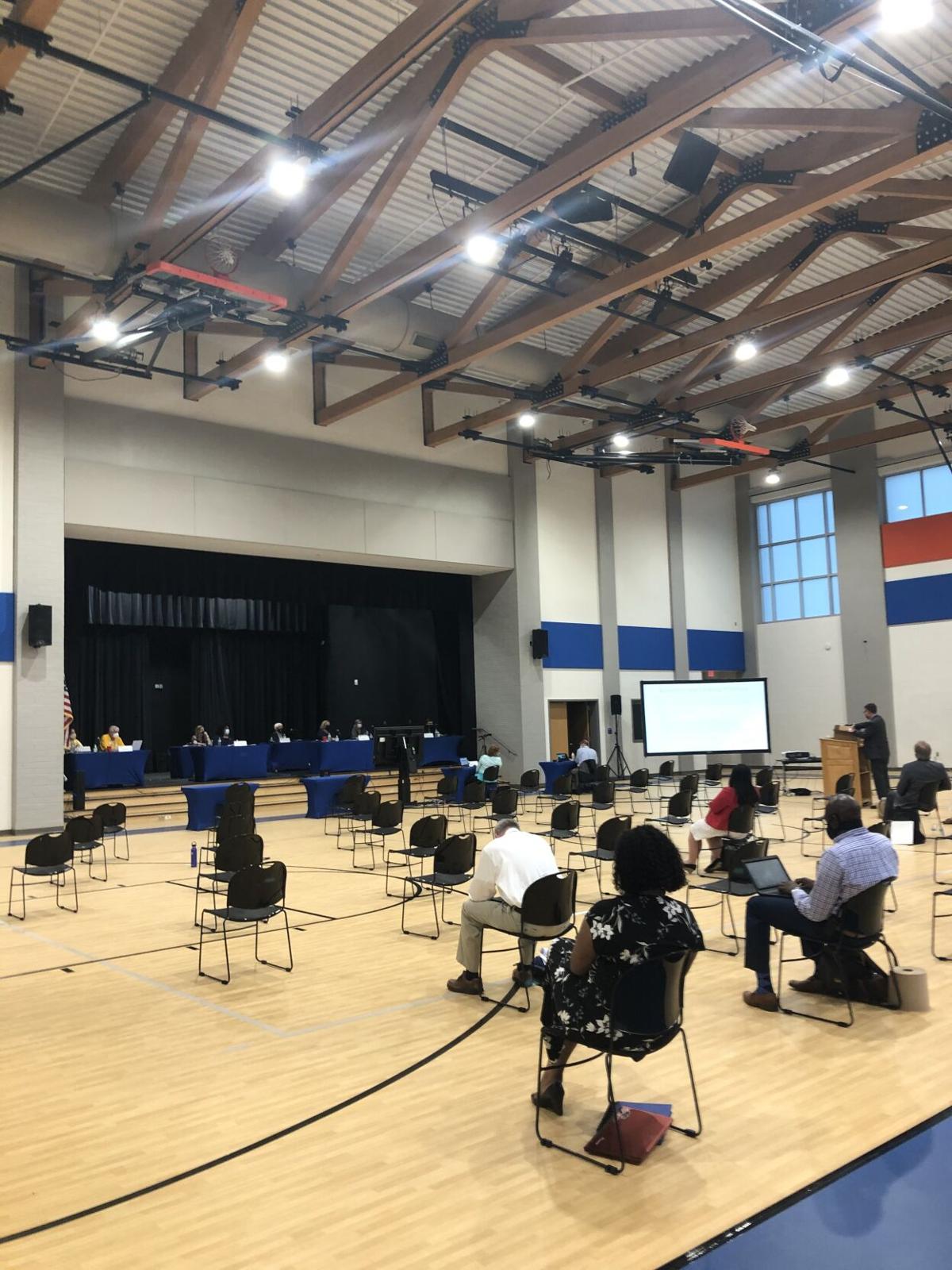 That offer, which could still be upset, was the first topic on the Moore County Board of Education’s agenda on Monday afternoon. It was the board’s first physical meeting since the coronavirus pandemic broke out in March and was held in the gymnasium of the new Aberdeen Elementary, which will open to students in two weeks.

“This is the disposal of the old Aberdeen Elementary School, and it’s gone by that name, ‘old’ for many years, but today we really mean it,” said John Birath, the district’s director for operations. “This is the new school.”

The offer from Pathfinder Investment Management, LLC of Raleigh is greater than the value of the old Aberdeeen campus reflected in the appraisal the school board commissioned last year. Even so, it’s only the first step in the process as the district divests itself of the old campus.

Pathfinder already owns commercial property in Aberdeen: the Town and Country Shopping Center just down the road from the school.

Birath told the board that its $1.5 million offer was the highest the schools had received as of Friday. On Monday, the school board will consider approving that bid and authorizing staff to advertise the next round of bidding.

If the offer is approved, Pathfinder will put down a $75,000 deposit to begin what’s called an upset bid process. That’s the method that the school board decided late last year to use in selling the old Aberdeen Elementary and Aberdeen Primary campuses.

Once the schools reopen bidding, other interested buyers will have 10 days to submit a higher bid. To qualify as upset bids, the next round of offers will have to be a set percentage higher than the current high bid.

In the next round of the process, the minimum “upset” bid that will be considered is $1,575,050. Bidding will conclude once an offer stands for 10 days without being upset.

If Pathfinder emerges as the highest offer once bidding is concluded, sale of the Aberdeen school property would contingent upon an inspection period, and then the town of Aberdeen’s approval of its proposed development plan for the site within 180 days.

Lee and Associates, the district’s agent in selling the Aberdeen schools, is also preparing to begin an upset bid process for the sale of the Aberdeen Primary campus on Keyser Street. Students from both old schools will attend the new Aberdeen Elementary off of N.C. 5 this year.

In other business on Monday, school staff proposed delaying any similar process for the two old Southern Pines campuses until at least December.

Those schools will remain in use through the end of 2020, since the new Southern Pines Elementary School in Morganton Park North won’t open until January.

The board remains in negotiations with the Southern Pines Land and Housing Trust over a potential private sale of the primary school on Carlisle Street. The trust hopes to acquire the site, where a Rosenwald school was originally built, and reinvent it as a West Southern Pines community and Black cultural center.

Last month, the trust offered the district $200,000 for the primary school.

The school board made the price of the school — $630,000 as valued in an appraisal — one of the conditions of such a sale when it first authorized staff to negotiate with the trust earlier this year. But the trust’s leadership has requested an extension that the board will consider granting next week..

The schools are also exploring the possibility of selling the old Southern Pines Elementary campus on May Street to Moore Montessori Community School.

Originally, the board set out to sell that school by upset bid as well, but this past spring leaders of the Montessori charter school asked the schools to consider a direct negotiation with them. State law requires public schools to sell surplus property at no less than market value but also makes provisions for private sales to nonprofit organizations with cultural and historic preservation goals as well as for charter schools.

The school board initially declined the Montessori school’s request to discuss a private sale or lease of the elementary campus, but since then the school’s leaders have said they would be willing to pay the appraised price of just over $1 million.

On Monday, Grimesey said that as the district prepares to reopen during the coronavirus pandemic, and plans for the opening of the new Aberdeen and Southern Pines schools, divesting itself of the old Southern Pines campuses won’t be a priority until later in the year.

“A delay in any final decisions regarding the disposition of Southern Pines Primary and Southern Pines Elementary until at least the December work session and board meeting will help ensure that administration and legal counsel have sufficient time to study the many legal, economic and practical implications of the trust’s and Moore Montessori’s requests,” Grimesey said.

“If we need the Southern Pines buildings through January, frankly any upset bid process doesn’t make sense until we’ve completely utilized the facilities.”

School staff will continue discussions with the Southern Pines Land and Housing Trust and Moore Montessori Community School with the goal of either concluding or abandoning negotiations in December.

Next week, the school board will consider retroactively extending the Aug. 1 deadline it previously set to come to an agreement with the land trust.