Architectural rendering of the proposed mixed use retail center at the corner of U.S. 15-501 and Murray Hill Road in Southern Pines. Image courtesy of MREA Southern Pines, LLC. 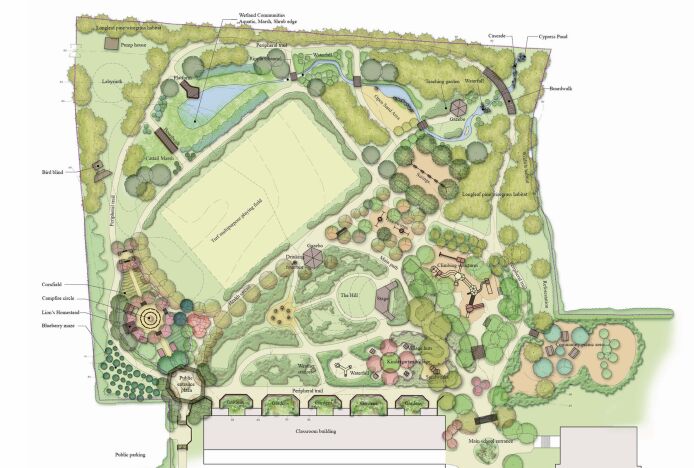 A vacant lot at the corner of U.S. 15-501 and Murray Hill Road could soon be developed into a small, mixed use retail center. William Moseley of MREA Southern Pines, LLC, has submitted plans for an 8,200 square foot mixed use building.

A Chipotle restaurant is clearly identified as a primary tenant according to architectural renderings presented to the Southern Pines Town Council on Wednesday.

"At this point, we do not have a planned location in Southern Pines. But stay patient!" Sally Evans, a Chipotle spokesperson, told The Pilot Friday morning. "We are always looking to bring our food with integrity to great new communities."

Other possible tenants as identified in the plans include a Sleep Number bedding store and a Ruby Wine shop.The location of the proposed development is one of the few vacant parcels in this section of southern Moore County. The tract faces both Murray Hill Road and U.S. 15-501 , near Lowe’s Hardware and Kickback Jack’s Sports Bar. The proposed site plan shows vehicle access points from both of these roadways.

Town leaders also reviewed architectural plans for the new Target store and shopping center that will be developed as phase one of Morganton Park South. The four proposed commercial buildings total 221,000 square feet and are designed as an “open air” retail development.

Bill Mees, director of development for Midland Atlantic Properties, noted there were no significant changes to the architectural design since the project’s conceptual and preliminary plans were reviewed and approved by the town in October. “From day one, we’ve said that the renderings we show are the renderings we need to deliver.”

Courtney Kuch of RSP Architects said the plans call for a number of public gathering spaces which include decorative overhead trellises and water features. In addition the shopping center is “bookended” on both sides by tall clock towers. These amenities provide a geographic frame of reference for visitors to the site and also encourage pedestrian connectivity. The retail area has sidewalks and a crosswalk that also connect to the historic Black family cemetery that will be protected, and a greenway that parallels the proposed four-way parkway that will be constructed between U.S. 15-501 and Morganton Road as part of the first phase of development.

Midland Atlantic Properties has developed 11 projects in North Carolina, notably Southpoint, an award-winning 325-acre project in Durham, and works frequently with other corporate partners, including Kroger, Publix and Harris Teeter grocery chains, in addition to Target.

“In today’s retail, you have to offer more than brick and mortar to compete with online sales. You give people a reason to be here and stay here. It is a lifestyle center,” Kuch said, noting that many of the architectural details were “leveraged” from existing features seen in downtown Southern Pines. These include overhead canopies that mimic the train station and a variety of brick colors and textures.

Though he did not identify the tenant by name, he said the second largest tenant space (adjacent to Target) would likely be a grocery store. Kuch said the building follows the style design the unnamed tenant has adopted which incorporates a second floor outdoor patio facing the parking lot.

The overall shopping center design also includes several other spaces with outdoor patio areas that have been set aside for potential restaurant tenants.

In other discussion Wednesday, the Southern Pines Town Council:

Scheduled a public input session to hear from community members on a proposed 99-year lease agreement with the Southern Pines Land & Housing Trust for the town’s use and operation of the Blanchie Carter Discovery Park. The recreational property is part of the 16-acre former Southern Pines Primary School campus the land trust is acquiring from the Moore County Board of Education.

Called a public hearing on Tuesday, Nov. 9, to consider a conceptual development plan for a three-story, mixed use building proposed at 470 NW Broad Street. Located three blocks from downtown Southern Pines, the 0.6-acre site is currently zoned for office services. A turn-of-the-century house affiliated with C.T. Patch, an early Southern Pines business owner, is still located on the subject property. It was later converted to commercial use, including a barber shop and dog grooming salon, and would be demolished according to the plans presented to the town’s Planning Board in August.

Called a public hearing on Tuesday, Nov. 9, to consider a voluntary annexation request for an 8-acre property located at 295 N. Bethesda Road.

Reviewed a list of proposed updates to the town’s code to comply with Senate Bill 300, which includes various requirements to decriminalize certain local ordinances. The town will retain criminal authority for violations for specifically identified ordinances while several others will be deleted. The recommendations were based on staff review with assistance from Police Chief Nick Polidori.

I hate to see another mattress store. We have our very own Dreams 4 All, and its foundation that has done so much for this community, even to investing in the equipment to refurbish old mattresses to give away. I guess you can't control what business opens in a strip mall, but I have trouble featuring what the congestion is going to look like with people entering and exiting both Lowes and the gasoline station. Murray Hill is a small two lane road and traffic already backs up on it badly.