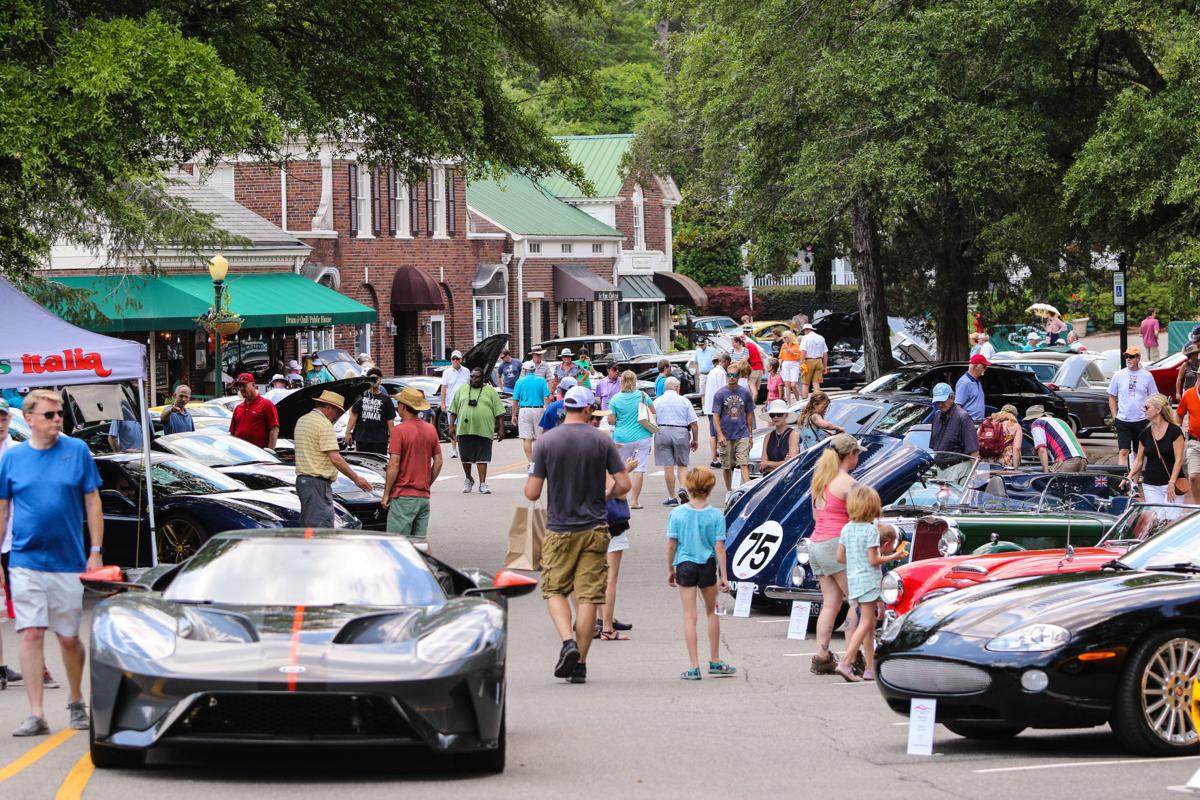 Spectators check out cars on display in downtown Pinerhust during last year's festival. 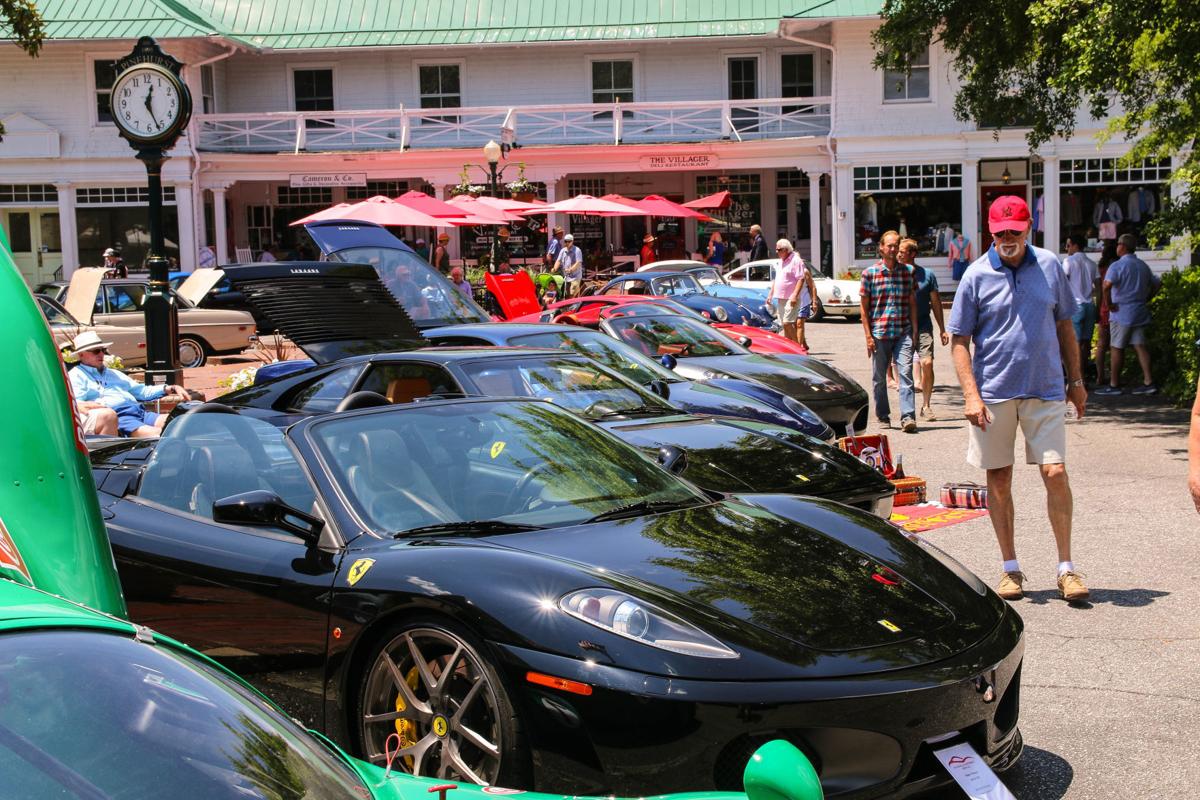 Cars on display in front of the Pinehurst Department Store building, 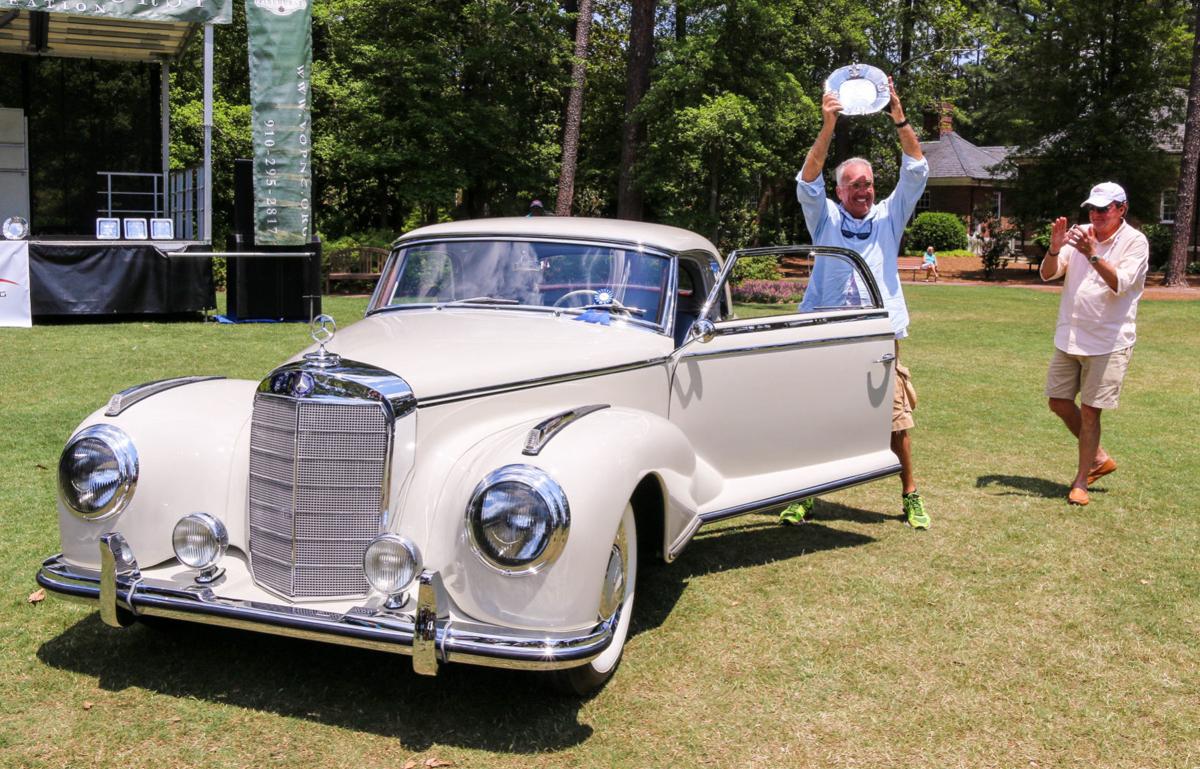 Guy Lewis celebrates winning the Best in Show-Touring award for his 1953 Mercedes-Benz 300S Coupe during the 2019 Sandhills Motoring Festival.

Organizers of the Sandhills Motoring Festival are “forging” ahead with plans for the third annual event over Labor Day weekend in Pinehurst.

“The only thing that has changed is the date,” festival president Marvin Waters said, with the previous two taking place Memorial Day weekend. “The run of events is all the same. We’re simply trying to put on a world-class event for anyone that is in town that week.”

The coronavirus pandemic forced moving the event from a holiday weekend that traditionally kicks off the summer season to one that marks its end.

“We’re going to drop some serious car culture in the village of Pinehurst for the better part of four days,” Waters said. “If you are a car person and you are in town, we want you to come over … see the cars and talk to the owners and enjoy what is going on. We are delivering 7,000 demographically suited people to what goes on in Pinehurst.”

Proceeds from the festival benefit the automotive program at Sandhills Community College.

Waters, a Porsche Club of America member, and Mercedes-Benz Club of America members Steve Redwine and Bill Faison founded the Sandhills Motoring Festival in 2018. They were looking to fill the void after the Pinehurst Concours d’Elegance ended its successful run in 2017. It featured rare and vintage automobiles in a judged competition.

The first event was primarily based at the Little River Resort, though it did feature a display of cars at Tufts Park in the Village Green as part of the weekend events.

Last year, organizers struck a sponsorship deal with the village of Pinehurst to stage its cars on the streets in the historic downtown for the first “Concours in the Village” on the Sunday of Memorial Day weekend. Despite the heat, the event drew rave reviews from participants, spectators and local businesses.

“That really took us to the next level,” Waters said.

Under the sponsorship agreement, the village closed the streets in the downtown, provided the use of Tufts Parks and the mobile stage for the awards ceremony.

This year, the event will be centered in Pinehurst, with the Pine Crest Inn and Homewood Suites serving as the host hotels, Waters said.

The only thing not taking place in the village will be a private Hangar Party at the Moore County Airport that Saturday night, according to Waters.

Because of the pandemic, the festival is instituting a number of measures to ensure the safety of spectators and car owners. Masks will be provided for those who need them, and hand sanitizer stations will be set up throughout the village.

“We are encouraging everyone to be respectful of others and social distance,'' Waters said, noting that all of the events take place outside. “The thing I want everyone to know is that we are thinking, acting and reacting in their best interest.”

Waters said another new development this year is partnership with the newly formed Pinehurst Motor Club, which will also be one of the sponsors.

“We are extremely happy to have them involved in that weekend,” Waters said. “We feel like there is a lot of synergy there for us and them.”

Redwine noted that additional sponsorships are still available. More information can be found on the organization’s website at www.sandhillsmotoringfestival.com.

Things kick off the Friday night of Labor Day weekend, Sept. 4. Cars will be on display on the property across the street from the Pinehurst Brewery on Magnolia Road.Waters aid Dogwood Road, which runs in front of the Pine Crest Inn, will be closed that Friday night, and there will be a live band.

“This is all for locals,” he said. “This should be a great evening.”

Saturday will feature the traditional road rally around Moore County, beginning and ending at the Pine Crest Inn. It has an added twist: Participants will be given 25 questions to answer to help guide the tour, Lewis said.

“You find the answers as you ride through the county,” he said.

The private Hangar Party will take place that Saturday evening.Waters said a number of Ferraris, including new models and race cars, will be on display. In addition, Jet It, which partners with the Ferrari Challenge race series, will have some jets on display that people can walk through, Lewis said.

The main event will be the second Concours in the Village in downtown Pinehurst. Cars will be in place by 8 a.m., and the show is open to the public free of charge.

More than 125 automobiles in 14 classes will take part in the judged competition, and other beautiful luxury automobiles will be showcased.

This year, the vendor village will be Tufts Park, where some cars will also be on display. The Market Place food truck and Pine Scones will also be there, he said.

In addition, the Car Club Showcase, featuring about 80 automobiles from car clubs around the state, will be staged on the property across from the Pinehurst Brewery.

The awards ceremony that afternoon will take place at the traffic island, where four streets come together. Miss North Carolina Alexandra Badgett will be on hand to help present the awards, Waters said. Those include Best in Class, and a number of special awards including a couple of new ones: car you would most like to drive across country, and the car you would most like to take to the race track.

Miami attorney Guy Lewis’ 1953 Mercedes-Benz 300S Coupe won Best in Show in the touring category as well as the top award from Mercedes-Benz last year. He will be returning with another famous automobile that will be on display – one that might be familiar to local residents.

Lewis also happens to be a former U.S. attorney for the Southern District of Florida. From 1989 to 1994, he was co-counsel in the landmark trial against former Panamanian leader Gen. Manuel Antonio Noriega. He later served as the director of the executive office for United States Attorneys in Washington, D.C., providing guidance and oversight for all 93 U.S. attorneys.

The other top award — Best in Show in the sporting category — went to a 1960 Lotus Elite owned by Bill Timmons of Pinehurst. He said he bought the car new.

Waters said after last year’s event that it was a success by nearly every measure. He said it was sold-out in terms of the entries, and estimated that 3,500 to 4,000 spectators came out during the day, despite the 90-plus-degree heat.

This year’s event is also sold out.

Redwine said the village provides the “perfect setting” for the Sunday event.

“The merchants were extremely happy last year,” said Redwine, who is vice president of marketing for the event.

He and Chris Smith, vice president of operations, met with leaders of Pinehurst Business Partners.

“They were overjoyed at the amount of foot traffic coming into their businesses,” he said. “All of the restaurants were slam-packed.”

Lewis added that many said it was on-par with crowds for a U.S. Open.

Waters said organizers envisioned an event that would be similar to the Concours on the Avenue in Carmel by the Sea. The event in the California beach town serves as the traditional kickoff for Monterey Car Week in August, though it has been canceled this year because of the pandemic.

Wilbur Strickland of Hilton Head Island, S.C., who serves as the chief judge for the Motoring Festival, said he does a lot of these kinds of events.

“This one is so special,” he said. “I always think about what the spectator experience is. … This is really an extraordinary venue. I think that is what makes it so attractive for people.”

Strickland said throughout the day last year, spectators would go into the shops and restaurants.

The Sandhills Motoring Festival will donate all of its proceeds to the Sandhills Community College Foundation to fund scholarships for students in the automotive program. The inaugural event raised $5,000 and last year, they presented a check for $7,500, according to Lewis. He said the goal this year is to raise $10,000.

Waters said they want this to become a permanent event in Pinehurst.

“We are here to stay,” he said. “We are going to continue to grow the event. It will not get larger footprint-wise. It will just get better, and bringing it all into the village has really helped us.”

'Concours in the Village'

The first ever "Concours in the Village" took place Sunday on the streets in downtown Pinehurst. It was part of the weekend Sandhills Motoring…