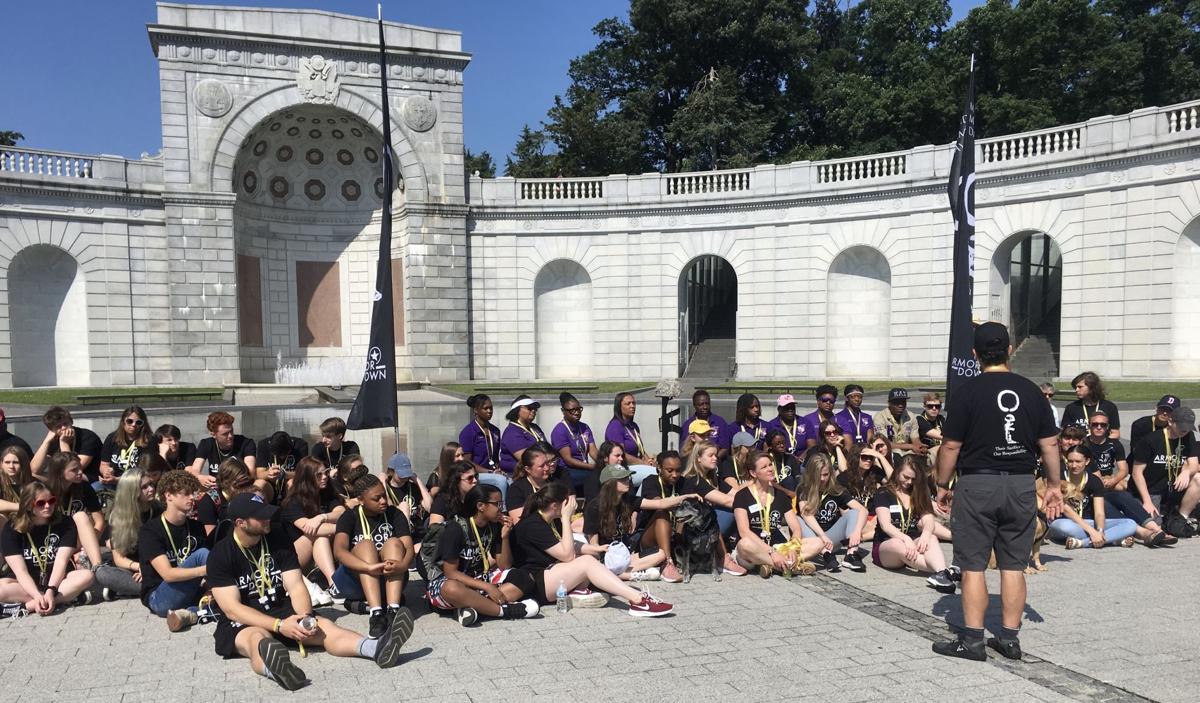 Pinecrest students listen to Armor Down with Mindfulness founder, Ben King, as he explains their role in the Mindful Memorial Day at Arlington National Cemetery 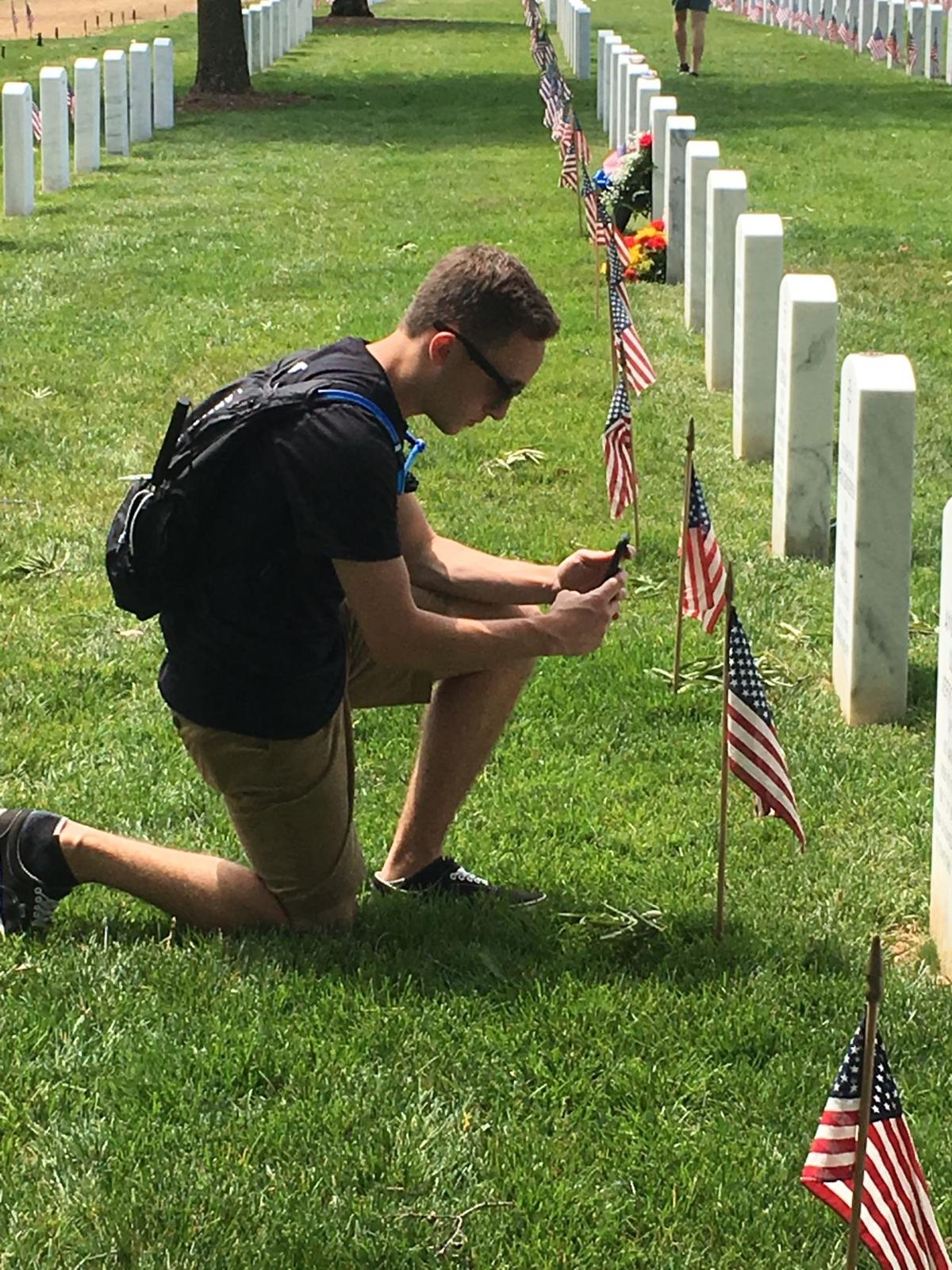 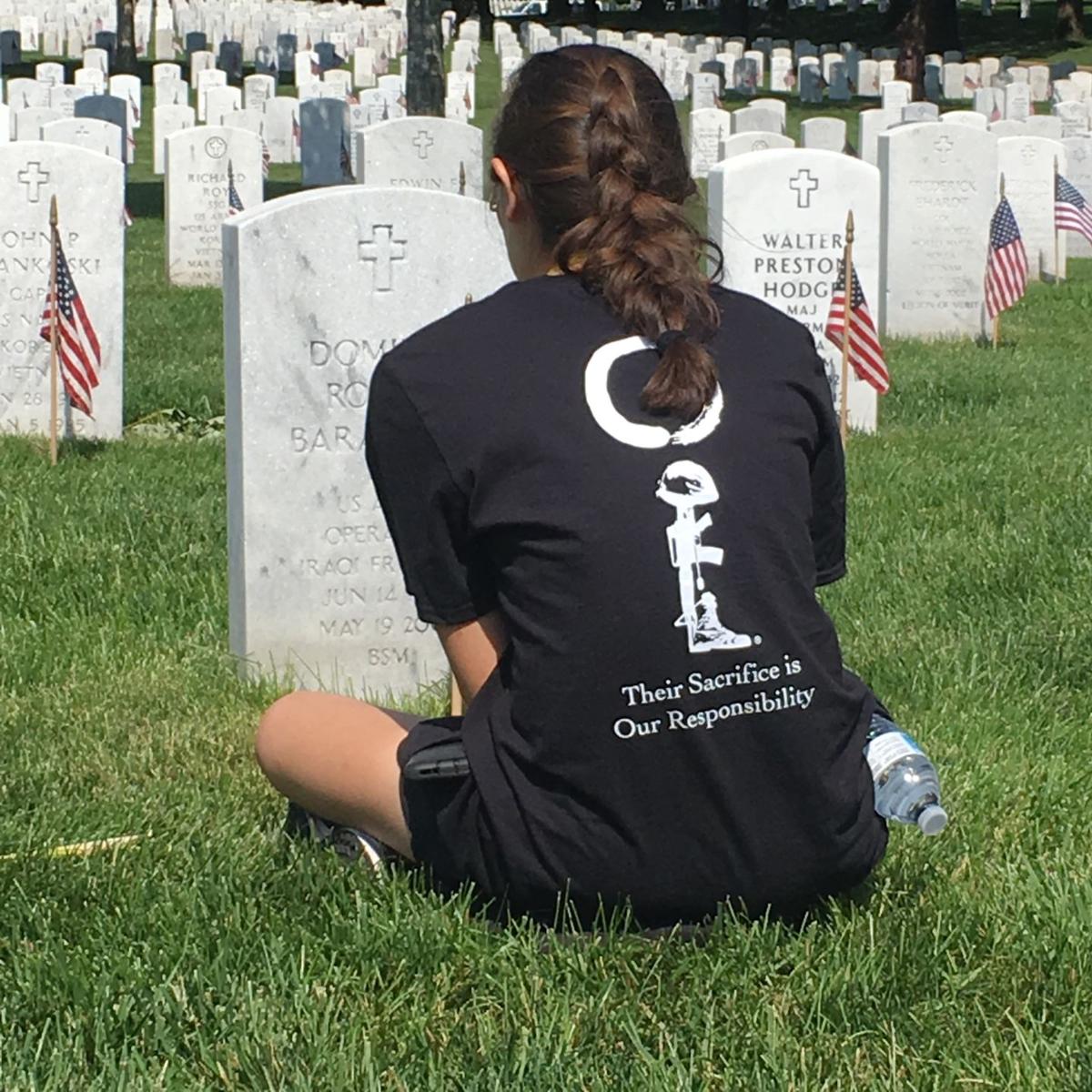 While many people relaxed on the three-day Memorial Day weekend, 49 Pinecrest High School students and five teachers traveled to Arlington National Cemetery to pay their respects to fallen soldiers.

“My brother is in the Special Forces and is a combat veteran, and I am a big supporter of anything that honors our veterans, alive and fallen,” said Samkin.

Ben King, the founder of non-profit Armor Down with Mindfulness, who organizes the Mindful Memorial Day, met with the students at the Women in Military Service for America Memorial to share the purpose of the

The Mindful Memorial Day observance was created in 2014 by Armor Down to honor Post-9/11 fallen service members, and to increase awareness of the healing capabilities of mindfulness. More than 6,912 service members have died in theater since Sept. 11, 2001, according to Armor Down. The organization believes that by devoting their fullest attention to the sacrifice of the warriors, the students could begin to appreciate their importance to the citizens and institutions they died to protect.

The students were each given a yellow ribbon with a fallen soldier’s name, rank, home city, theater, date of death and location of tombstone. They were also given a “mindfulness cushion.” The students then walked to the tombstone of their soldier, and while seated on their cushion, they prayed or focused their thoughts on the fallen soldiers.

After their meditation at the tombstone, the students wrote their thoughts on the cushions, along with the name of the fallen soldier. These cushions will be given to veterans who are participating in Armor Down’s mindfulness support programs.

Samkin had been participating in the Mindful Memorial Day for the past three years. When she approached by King to bring students to volunteer, she jumped at the opportunity.

“Ben is an incredible guy, and I was moved by the idea of honoring the fallen since 9/11,” said Samkin.

She organized the trip with help from four other Pinecrest teachers: Nicole Matthews, Amy Hatcher, Joseph Vrnak and Frankie Keller. These teachers also participated as chaperones for the trip.

Samkin identified students who either had a military connection, showed leadership qualities at school and/or had a strong interest in service to their community. Almost all of the students that were invited were able to participate, motivated by the mission and by the reasonable cost of $300. The trip included commercial bus transportation, lodging, most meals, the Mindfulness Memorial Day and several sight-seeing opportunities.

“Keeping the cost manageable was critical to ensure that students could participate,” added Samkin, “We also had several donations, did some fundraising, and tried to find activities that were free. And we were able to provide nine students with sponsorships for the trip.”

In addition to the Mindfulness Memorial Day, the students also enjoyed a night tour of the Lincoln Memorial. And they visited numerous historic sights including the Tomb of the Unknown Soldier, the JFK Eternal Flame, the National Archives, the MLK Memorial, the FDR Memorial, the Jefferson Memorial and the Holocaust Museum. They wrapped up the trip with a stop at Mount Vernon to tour the home of President Washington.

Senior Madelaine Bradley hopes the trip is offered again next year for other students.

“I think it is important to remember that Memorial Day is a time to honor our service members, and this trip allowed us to honor men and women who died serving their country,” explained Bradley, “I have visited Washington DC before but participating in the Mindful Memorial Day event makes this trip very special.”

What a great way to show respect for those who served and continue to serve.