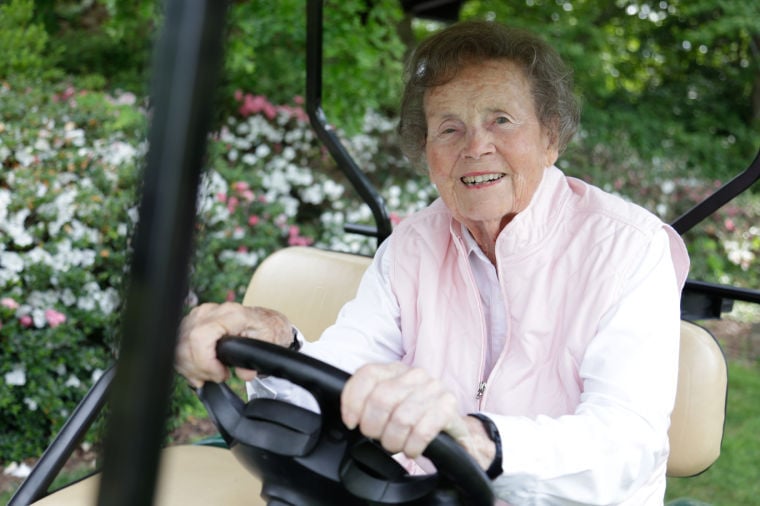 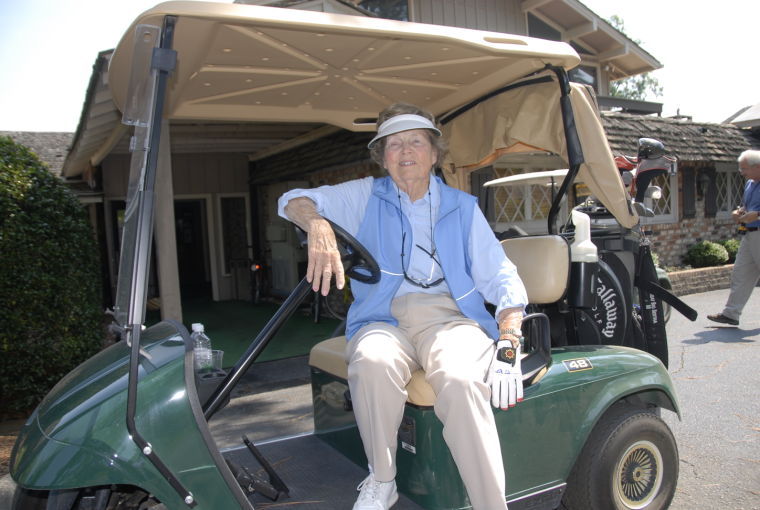 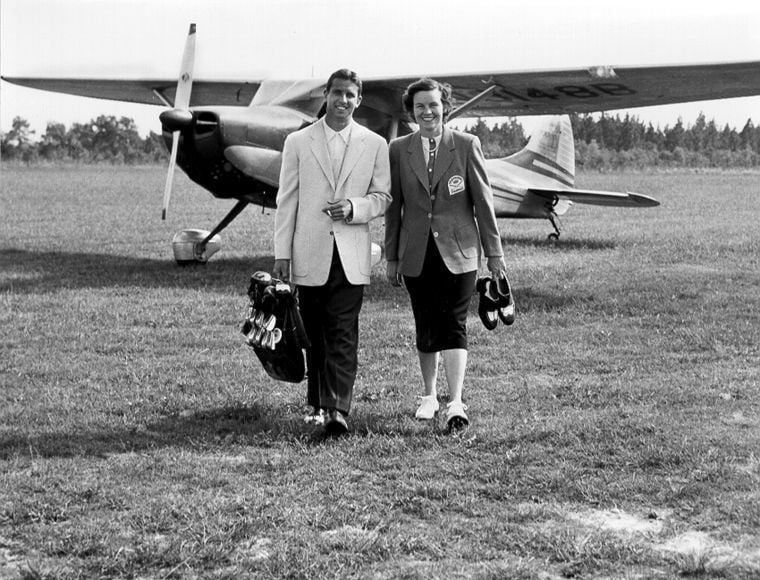 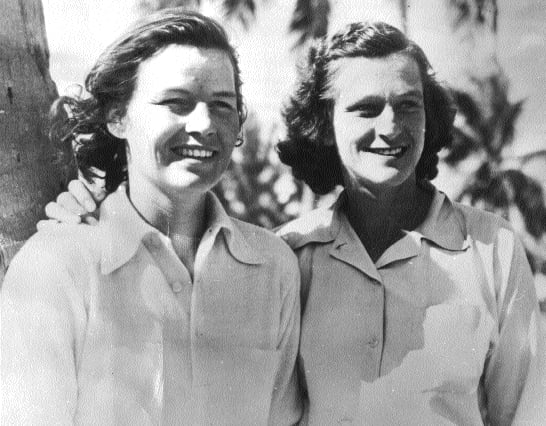 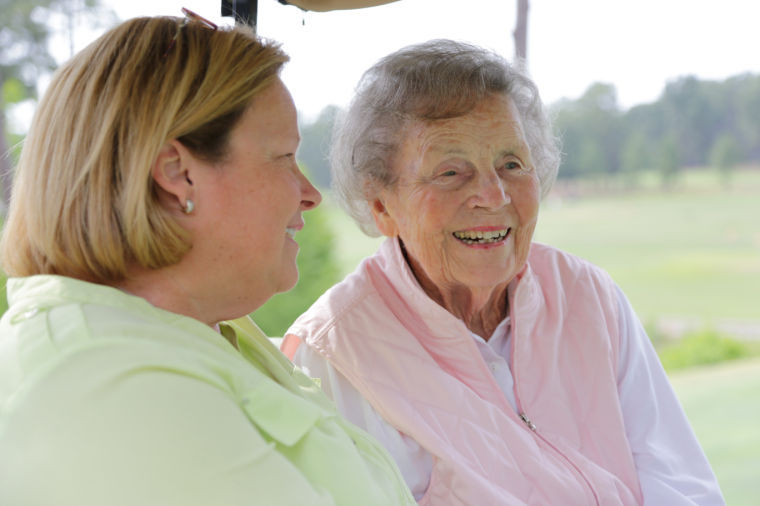 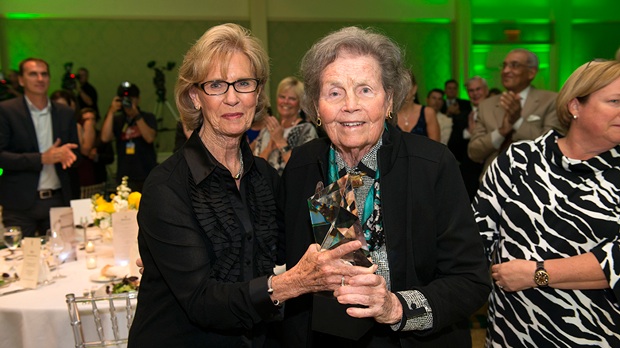 Bing Crosby serenaded her in the Pine Needles bar. Perry Como played her course. Jimmy Carter stayed at the lodge during the National Governors’ Convention. Rudy Vallee was a guest and she played with Jackie Gleason, Michael Jordan and Supreme Court Justice Sandra Day O’Connor.

Peggy Kirk Bell, the grande dame of women’s professional golf who led two of Moore County’s signature golf properties for years and was an inspirational figure to thousands, died peacefully Wednesday night at her home. She was 95.

In a statement to Pine Needles and Mid Pines members, club president and Mrs. Bell’s son-in-law, Kelly Miller said, “She was a great lady and loved seeing and being around each and every one of you.

“Mr. & Mrs. Bell literally built the Pine Needles Lodges and most of the facilities here that you and others enjoy today. Her spirit continues today thru each of you, for which the entire family is very thankful for. I know many of you who knew Mrs. Bell have a great “Ma Bell” story. Thank you for providing her so much joy, so much laughter, and so much love.”

Bell’s son, Kirk, said Friday morning, “What a great honor it has been for me to be part of such a wonderful woman’s life, a golf pioneer. She was a good and decent woman, and a wonderful mother.” Bell said he was “fortunate to watch her from the vantage point I had.”

“I got to sit on the front row,” he said. “I consider it a great fortune.”

Bell said he will always remember her “remarkable energy and her amazing wit and humor. … her love of people and her love of golf.”

“She was still accomplishing things late into her life,” he said. “She really loved this community and she loved her neighbors.”

He said the family has received condolences from all over the world.

“It is an honor that so many people loved and cared for her,” he said. “It is tough to lose an icon. The goal now is to keep her and dad’s legacy going and to keep her memory alive.”

Jim Dodson, editor of PineStraw Magazine and one of the foremost writers on golf in America, called Mrs. Bell the female Arnold Palmer for her impact both as a competitor and teacher. She was at the vanguard of women’s golf whose career predated the LPGA. Together with her husband Warren, the Bells bought the Donald Ross-designed Pine Needles Resort and Golf Course. Together they raised a family amid its lush-green grounds and comfortable familiar environs that today still draws thousands of golfers each year, including hundreds of women who regularly attend the “Golfaris” that Bell started and continued to participate in up until a couple years ago.

“We are saddened to hear of the passing of Peggy Kirk Bell,” said Bob Dedman, Pinehurst Resort and Country Club owner and president. “A true pioneer in golf, Mrs. Bell’s infectious charm, wit, joy and expertise helped foster the growth of the game we love. Her influence on Pinehurst stands with those of the Village’s founders, and her genial spirit embodies the best of golf and a life well lived.

“We offer our sincere condolences to Mrs. Bell’s family and to everyone at Pine Needles Lodge & Golf Club.”

LPGA Commissioner Michael Wahn said on Twitter late Thursday night that Mrs. Bell was “one of the women that truly set the standard that we have tried to follow for 66 yrs.”

The LPGA said on Twitter that it “mourns the loss of LPGA Pioneer Peggy Kirk Bell, a woman who dedicated her life to growing the game of golf.”

Annika Sorenstam, who won the U.S. Women’s Open championship at Pine Needles in 1996 — the first of three times it has been held there — said on her Twitter account, “So sad to hear the passing of Peggy Kirk Bell. She was an extraordinary lady, passionate golf instructor & caring friend.”

Christie Kerr, who won the 2007 U.S Women's Open championship at Pine Needles, tweeted Wednesday, “RIP Peggy Kirk Bell. A legend in the game. You were a very special person in my life. You will he missed.”

“She solidified Southern Pines as a golfing destination,” McNeill said in a statement to The Pilot. “Golfers from around the world return each year to Pine Needles and Mid Pines because Mrs. Bell treated everyone like royalty and made golf fun.”

He added that Bell was a “fine lady who would light up a room when she walked in.” He said her presence will be missed.

Mrs. Bell was known for her strong Christian faith, her salty political opinions, a thrifty nature and a love of gambling — mostly craps — and football. She also loved cars, owning many over the years including two 1928 Ford A-Models and a 1972 Austin London Taxie. Her favorites were convertibles. Bell owned a 1964 Lincoln and a 1966 Ford Mustang.

Born Margaret Anne Kirk, her family called her Peg. A native of Findlay, Ohio, Mrs. Bell was a natural athlete. She excelled at sports but, in that day and age, there were limited options even at the intramural level. At 12, she decided she wanted to become a physical education teacher. At 17, she decided to give golf a try because her mother told her she was too old for camp and there wasn’t much else to do in Findlay.

“I found it more of a challenge than any sport I’d tried. You simply couldn’t haul off and slam the ball like you would a softball,” shel said in “The Gift of Golf,” a biography written with noted golf writer and regular PineStraw contributor Lee Pace. “It took dexterity, but you had to apply it properly. Power was nothing without timing in golf.”

Mrs. Bell attended Rollins College in Florida — enticed by the warm weather and green golf courses — and there built what the Ladies Professional Golf Association described as “one of the best amateur records ever compiled.”

She won the Ohio State Championship three consecutive years in 1947, 1948, and 1949. That same year, she also won the Titleholders Championship and the North and South Amateur Championship. Other major titles were the Eastern Amateur and the Augusta Titleholders. Along with Babe Zaharias, she became a charter member of the LPGA.

As an amateur in 1947, she teamed with Babe Zaharias to win the International Four Ball Championship. She was a member of the USGA’s Curtis Cup team in 1950 and turned professional the same year. She signed a promotional contract with Spalding Sporting Goods Co. and played on the first professional Weathervane Team in 1952.

Her first date with Warren “Bullet” Bell, a former professional basketball player, was on a golf course. She later said golf “was always a constant in our lives. It was the center of our business and it was our escape — we loved to sneak out for a friendly match.”

One day in 1953, she and Bullet — by then her fiancee — met the operators of the Mid Pines resort. They suggested the couple become partners with them in owning the Pine Needles course. The course, they said, needed some tender loving care.

The couple purchased the course and a small lodge that same year for the bargain price of $50,000.

Their first Moore County home was a converted chicken coop, where they lived until moving to an apartment on May Street, and then finally a kit house delivered by truck and assembled in two days. Eventually the growing Bell family purchased the Pine Needles golf pro’s home and moved their belongs the one block trip in a dump truck.

The Bells raised their three children — Bonnie, Kirk and Peggy — in the gracious Tudor overlooking Pine Needles 18th hole. During the winter months, Peggy would teach and then, in her younger years during the summer, she would take the children out on tour with her.

An ambassador for the game of golf for generations of women, she was an acclaimed teacher using the Golfaris method — which emphasizes learning and fun.

Her more notable achievements include being honored as the LPGA Teacher of the Year, Golf Digest’s “One of the Six Best Women Teachers in the World,” winner of the first LPGA Senior Championship, 1990 LPGA’s Ellen Griffin Rolex Award, 2004 inductee into Golf Magazine’s World Golf Teacher Hall of Fame and she was a 1950 USGA Curtis Cup team member. She also was honored by the USGA with the Bobby Jones Award, among others. She was also honored by the LPGA with the Patty Berg Award. She also served as chairwoman of the largest tours for young women — the Peggy Kirk Bell Girls Golf Tour.

In 2014, Mrs. Bell was the first woman to be inducted into the Carolinas PGA Hall of Fame.

A glass case in the lobby of Pine Needles Lodge & Golf Club in Southern Pines pays tribute to a lifetime’s worth of excellence. Trophies, plaques, scorecards and other mementoes show the impact she had on the game, but there is nothing in the display that can possibly capture Bell’s dedication to the sport.

Arnold Palmer himself had this to say once about Mrs. Bell: “Peggy is a tribute to the game of golf. She has tirelessly given of herself to the game and her contributions have helped make it great.”

Mrs. Bell was preceded in death by her husband Warren “Bullet” Bell in 1984. She is survived by daughters Bonnie McGowan and her husband Pat, a former touring pro; Peggy Ann and her husband Kelly Miller, the president of Pine Needles and Mid Pines; and son Kirk.

She was the proud grandmother of eight: Michael and Scotti McGowan; Blair, and Kellyann Miller, Melody Miller McClelland; and Walker, Charles and Gracie Bell.

A memorial service will be held on Tuesday, Nov. 29 at 2 p.m. at Brownson Memorial Presbyterian Church. Visitation will be held at Boles Funeral Home in Southern Pines on Monday, Nov. 28 from 6-8 p.m.

In lieu of flowers, memorials may be made to The Fellowship of Christian Athletes or the Peggy Kirk Bell Girls Golf Tour (PKBGT) in Greensboro, NC.

A Requiem for Ma Bell

A pioneer of American golf has died at the age of 95.

Peggy Kirk Bell Remembered for Her Wit, Talent but Mostly Her Faith

A bagpiper stepped out of Brownson Memorial Presbyterian Church on Tuesday afternoon, leading the family of Peggy Kirk Bell into a drizzle of …

The venerable and historic Pine Needles Lodge and Golf Club in Southern Pines will host its fourth U.S. Women’s Open in 2022, the U.S. Golf As…