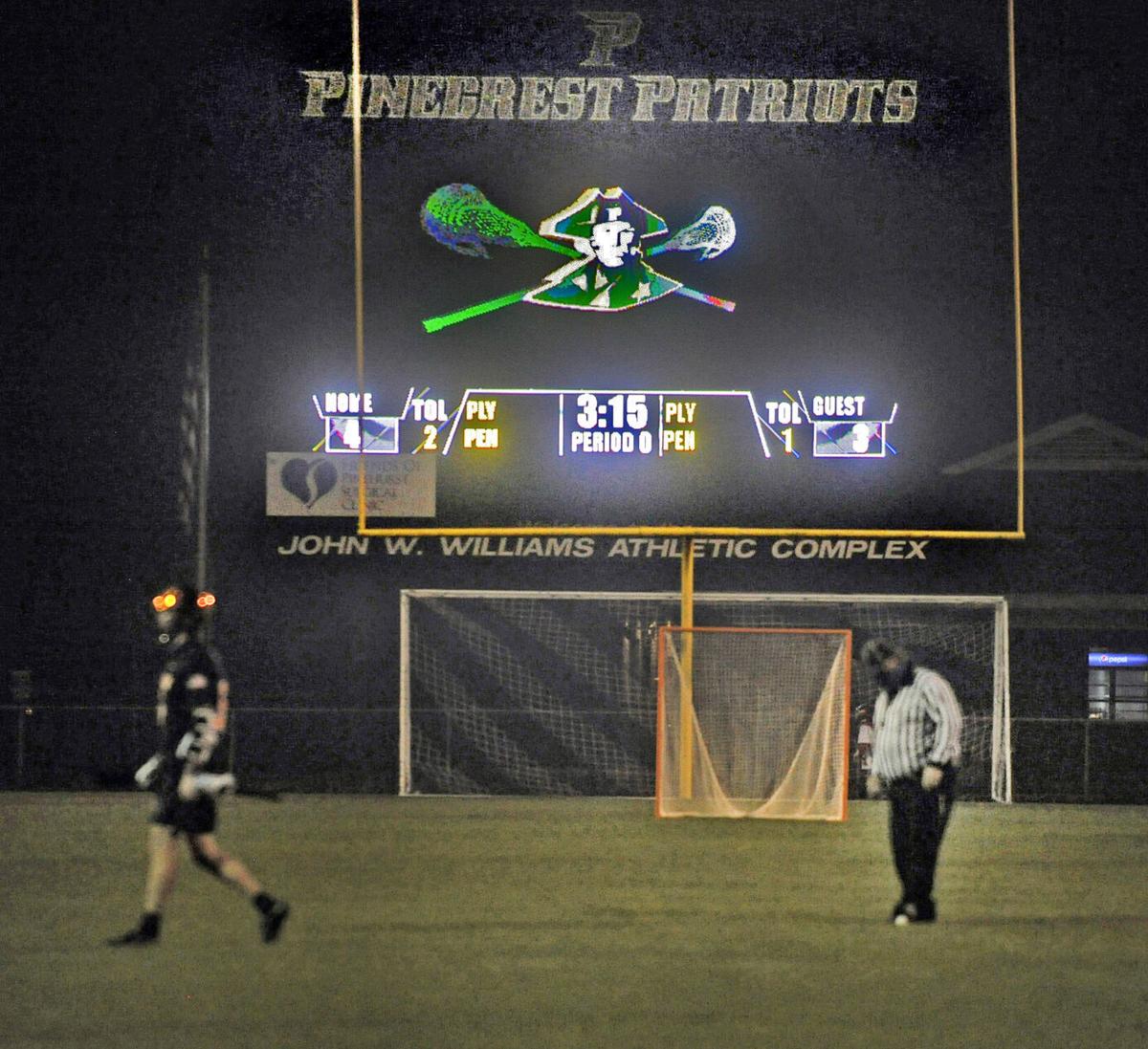 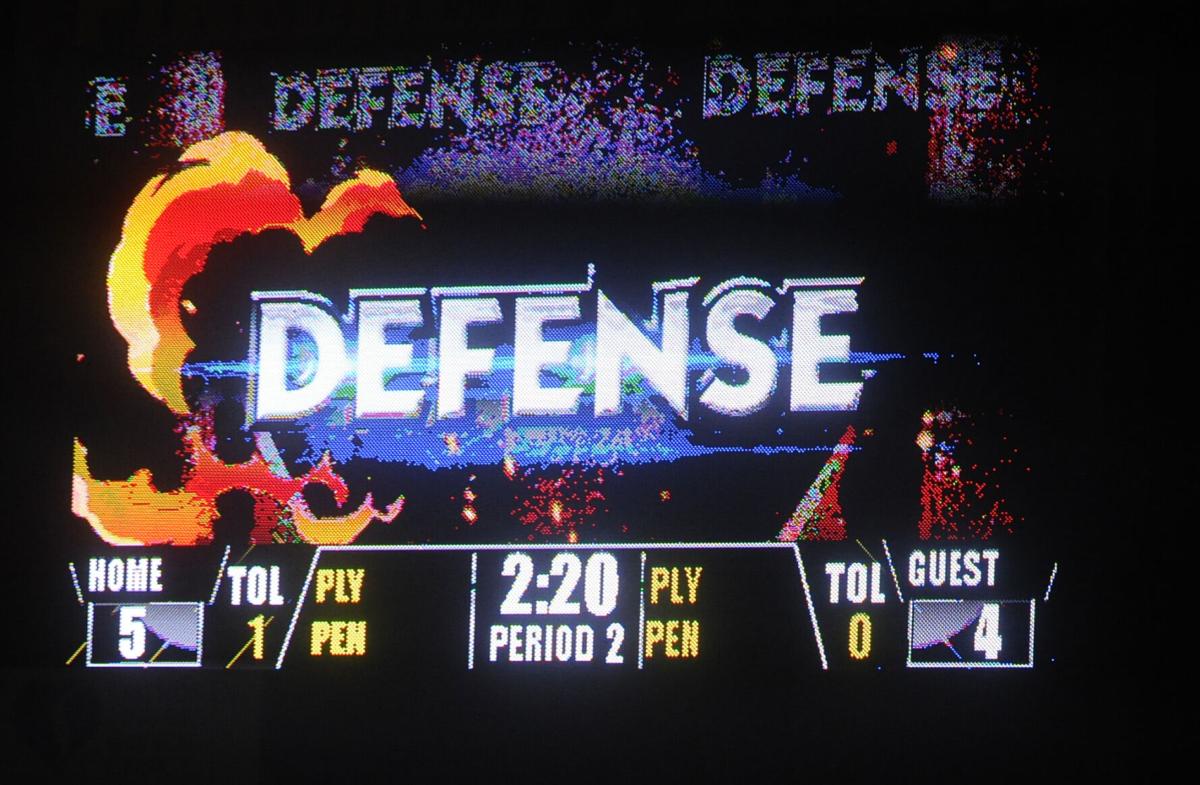 "Defense" graphics flash on the Jumbotron scoreboard at Pinecrest. 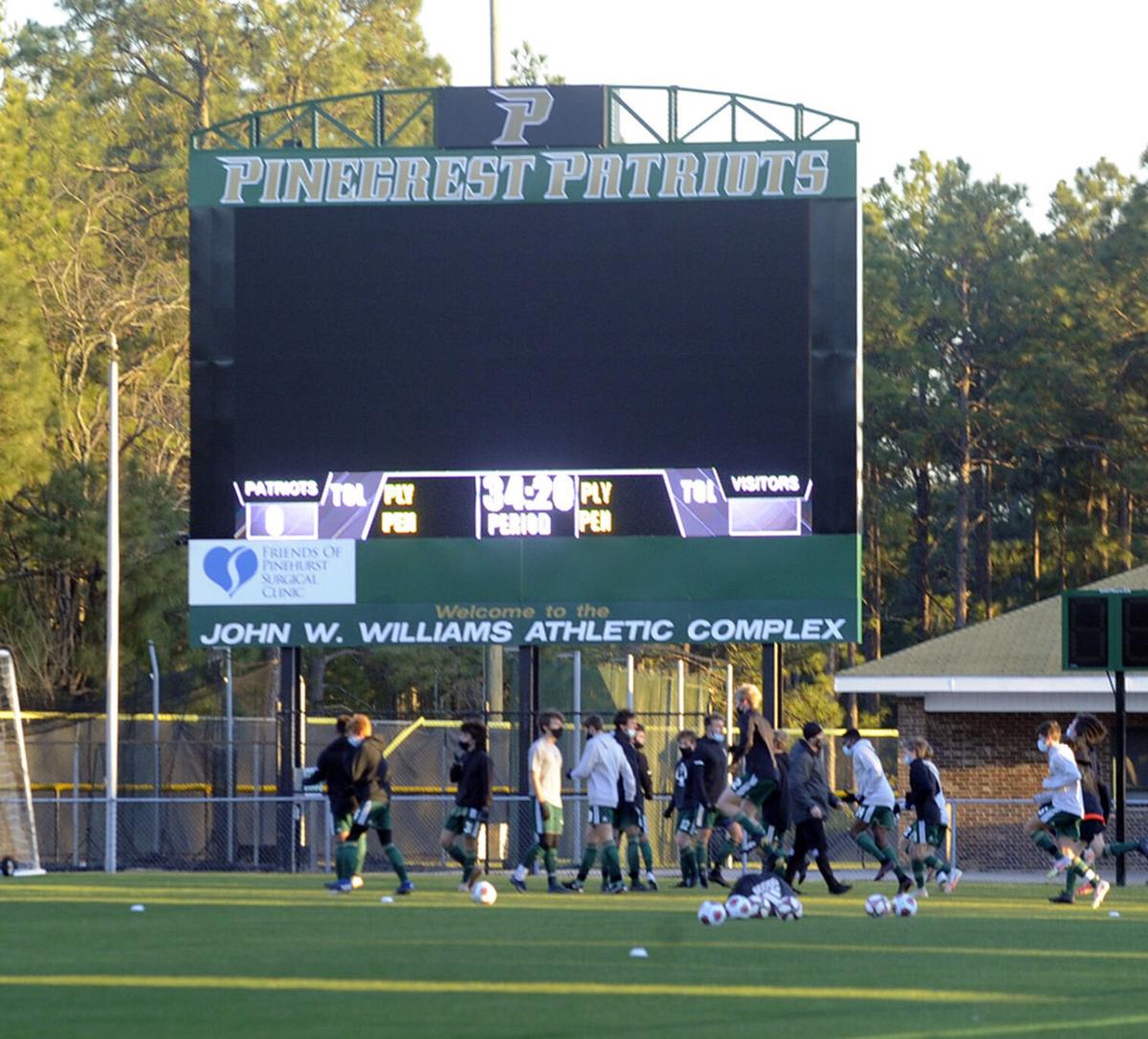 Players for the Pinecrest boys soccer team stretch in front of the new scoreboard at Pinecrest High School. The new addition to the John W. Williams Athletic Complex is expected to bring more corporate sponsorships to the athletic department.

Towering over the playing surface at John W. Williams Athletic Complex at Pinecrest High School, the new Jumbotron scoreboard is hard to miss.

Standing more than 40-feet tall with a nearly 20-foot-wide LED screen and an updated sound system, the behemoth of a scoreboard cost approximately $300,000. The purchase and installation was funded through private donations by the Football Booster Club donor organization. No public dollars were used; more than 2,400 donors covered the cost of the new scoreboard.

“We have been very fortunate that this entire project has been made possible by very generous local donors,” Pinecrest athletic director Jeff Hewitt said. “During this time of COVID, this is a great asset to our campus and community, as it will serve not only our athletes but all our student body through graduation yearly.”

While the new scoreboard is expected to liven up the game atmosphere, it could also light up some additional fundraising. When the donation was presented to the Board of Education, it was projected that additional corporate sponsorships could nearly double to an estimated $40,000 a year.

Through this extra funding, the school’s athletic department is looking to fund upgrades to the John Williams Athletic Complex in the future.

Through the first few games of soccer and lacrosse season, advertisers have been posted on the screen during the game, and video advertisements have been played during breaks in the action.

“During our first week, the Jumbotron has made our atmosphere at men’s and women’s lacrosse and soccer games electric with the ability to add to a great home field advantage,” Hewitt said. “We look forward to packed stands in the future where the Jumbotron will add life to Patriot Nation and our surrounding community.”

After two weeks of playing home games in the shadow of the new Jumbotron, coaches have already commented on the changes to the atmosphere at games, even though attendance has been restricted to 100 fans due to COVID-19 protocols set by the N.C. High School Athletic Association.

“It makes them feel like they’re big time,” boys’ lacrosse coach Brad Thomson said. “We’re trying to put a lot of effort into fundraising, and getting the program to where it needed to be, and getting them the best equipment so they feel good when they step on the field.

“It’s a look good, feel good kind of mentality, and that’s been fantastic.”

Before the season opener against Fuquay-Varina last Tuesday, all eyes from the boys’ lacrosse team were set on the scoreboard as video introductions of the starters were made, and a hype video featuring the team.

Boys’ soccer coach Jeremy Blake said that each team is responsible for graphics and other presentations on the screen for their games, and he expects to have more for the Jumbotron as the season goes along.

“They’re excited about it,” Blake said. “As we get a little more comfortable with it, we can get players’ names up and flash it when they score and stuff like that.”

Jumbotron scoreboards have become popular locally after Scotland High School unveiled its video scoreboard in the 2015 season. Hoke County High School finished installing its Jumbotron in September, and Pinecrest’s addition makes three of the eight Sandhills Athletic Conference schools with the oversized screens that will look over football fields this season that starts later this month.

Pinecrest football coach Chris Metzger said that the addition is a sign of the progress that is coming across high school sports at the state level.

“It’s not keeping up with the Joneses, but more moving with the times,” he said. “We have a lot of sports to showcase on that field, and it all works together.”

With limited fans expected for this football season that begins on Feb. 26, Metzger is longing for the Friday nights in the future that will bring thousands of fans to the stands to gaze at the new addition to the athletic complex.

“Next year we are going to have those kinds of home games where there will be 5,000 to 6,000 people in the stands to see the Jumbotron and all the advertisers on it,” Metzger said.

Shout out to all the teachers who are working their second jobs this weekend to make ends meet. Check out this new awesome video board. Sweet.