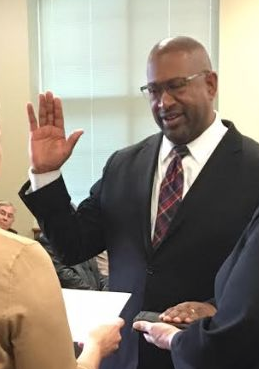 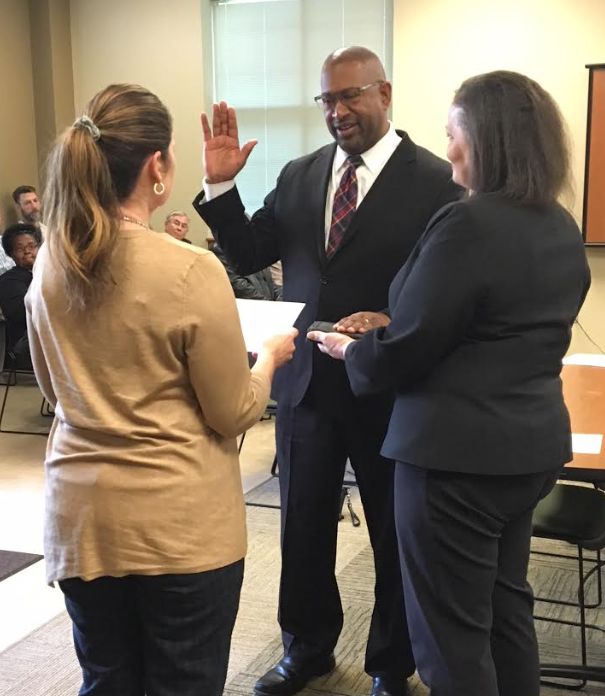 Newly appointed Southern Pines Town Councilman Paul Murphy took the oath of office on Monday, before a roomful of family, friends and neighbors.

“I am grateful to God and all of you for the opportunity to serve this beautiful town,” he said. “To the mayor, the town manager, and my fellow councilmembers, I am just grateful to be a part of this group.”

The Rev. Dr. Paul Murphy was appointed to fill the seat left vacant by the death of longtime Councilman Fred Walden. He was selected by unanimous vote from a pool of eight candidates.

“We are delighted that you accepted our decision to join the council and we look forward to working with you,” said Mayor David McNeill. “Now, we need to put you to work.”

Later in the meeting, McNeill also recommended two new volunteer task forces be created to address issues and concerns that had come up during the candidate interview process. Specifically, one task force will focus on economic development in West Southern Pines and the other will work with military interests.

In other town business Monday:

Southern Pines water customers were notified of a report of lead found in the town’s public system earlier this month. The contamination was found during routine monitoring efforts and a preliminary investigation indicated the elevated levels were caused by improper sample collection methods.

“We had eight samples show elevated numbers,” McKew said. “Any houses with a positive result were told within 48 hours.”

Upon a closer examination of those results and discussion with property owners, he discovered that five of the eight “positive” samples had been collected improperly.

“The number of samples sites is based on population and is conducted twice a year. In sampling protocol, we deliver sample bottles to the homeowner to collect a first-draw sample,” McKew said.

Identified property owners are instructed to allow water to stand motionless in their home’s pipes for six hours, then collect the water as it is first drawn out of the tap. For consistency in results, the test should be conducted from the primary drinking water tap — typically the kitchen sink. In the case of the erroneous testing, McKew said the samples were drawn from hall bathroom sinks where the water may have been held in the pipes for longer than the recommended sample methodology.

“If water is in the pipes longer than six hours, it can impact results. In the cases where we went back and resampled (correctly), we got back a non-detect result,” he said.

Samples are collected from houses identified as being at risk due to their age, and if the homes have copper plumbing.

McKew said retesting will be conducted at 60 samples sites in January, and those results will be reported in February.

“We want sampling to be uniform and indicative of what is truly going on,” he said.

“We are doing our part on how to educate homeowners on how they can lessen their chance of exposure, but we don’t have jurisdiction over how they fit their plumbing,” he said.

O’Linda Watkins, president of Moore County NAACP, recommended the town needs to engage in a more robust public education program on how to prevent lead exposure from water.

“Not everyone has been notified. Some people don’t have internet and people who live in apartments may not be getting the information mailings in water bills,” she said. “If the water bill is paid as part of their rent, how will they know there is a concern about lead in the water?”

Istre said it is at the discretion of apartment building managers to alert their tenants of potential risk, but the town is distributing fliers to schools, apartment complexes, and medical clinics in addition to direct mailings to property owners.

Importantly, he noted, there is a distinction between the water discoloration issue that some residents have experienced this fall, and the more recent lead reports.

“The lead concern is not a municipal system issue. Our role is to educate citizens about lead,” he said. “But the water discoloration issue does have to do with the town’s water treatment and distribution system.”

The water discoloration problem has vexed some residents since October, when heavy rainfall brought on by hurricanes Florence and Michael pushed higher levels of iron into Drowning Creek, the town’s sole source for water.

Resident John Winfield said there were more than 50 complaints about discolored water shared on a community website last month. Many of these complaints originated in the Pinehurst National community.

“People have green water, discolored water, and the information we’ve been getting back from the town has not passed what I call the smell test,” he said. “We are being told our water is safe, but now less than 60 days later we have reports of lead. We don’t know what way to turn.”

Barbara Latin also addressed town leaders, noting she too has continued to experience discolored water with visible sediment at her home in Pinehurst National.

Both expressed concern about staining on their plumbing fixtures, and potential damage to clothing washed in the tinted water.

“The discoloration is not normal, it is a problem associated with a seasonal event,” McKew said. “But there are no concerns with anything other than color.”

Istre said he has received sporadic reports of the problem, and they have been handled on a case-by-case basis by flushing out the water lines using the town hydrants within those communities.

“We are chasing them down as we find out about them,” he said. “Ideally the layout of a water system would be a loop. National is unique because there is only one access point, from U.S. 15-501. Once water goes into National, it circles around and ends, so we have to flush the entire system.

“Other areas in town have at least two areas where we can flush. National requires dedicated flushing.”

For more information on reducing lead exposure around your home/building and the health effects of lead, visit EPA’s Web site at http://www.epa.gov/lead or contact your health care provider.