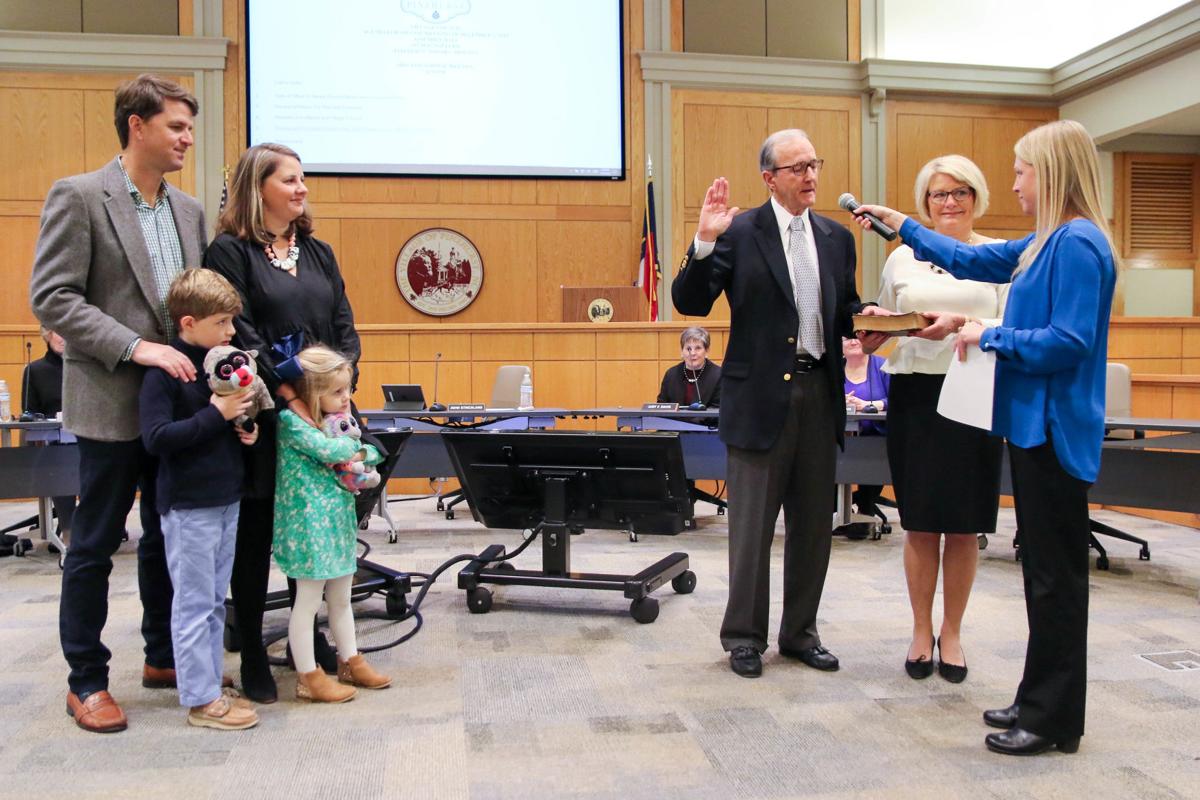 John Strickland is sworn in by Village Clerk Beth Dunn. His wife, Cynthia, holds the Bible, as their son-in-law and daughter, Bill and Amanda Berg, and their children, Harry, 7, and Emma, 5, look on. 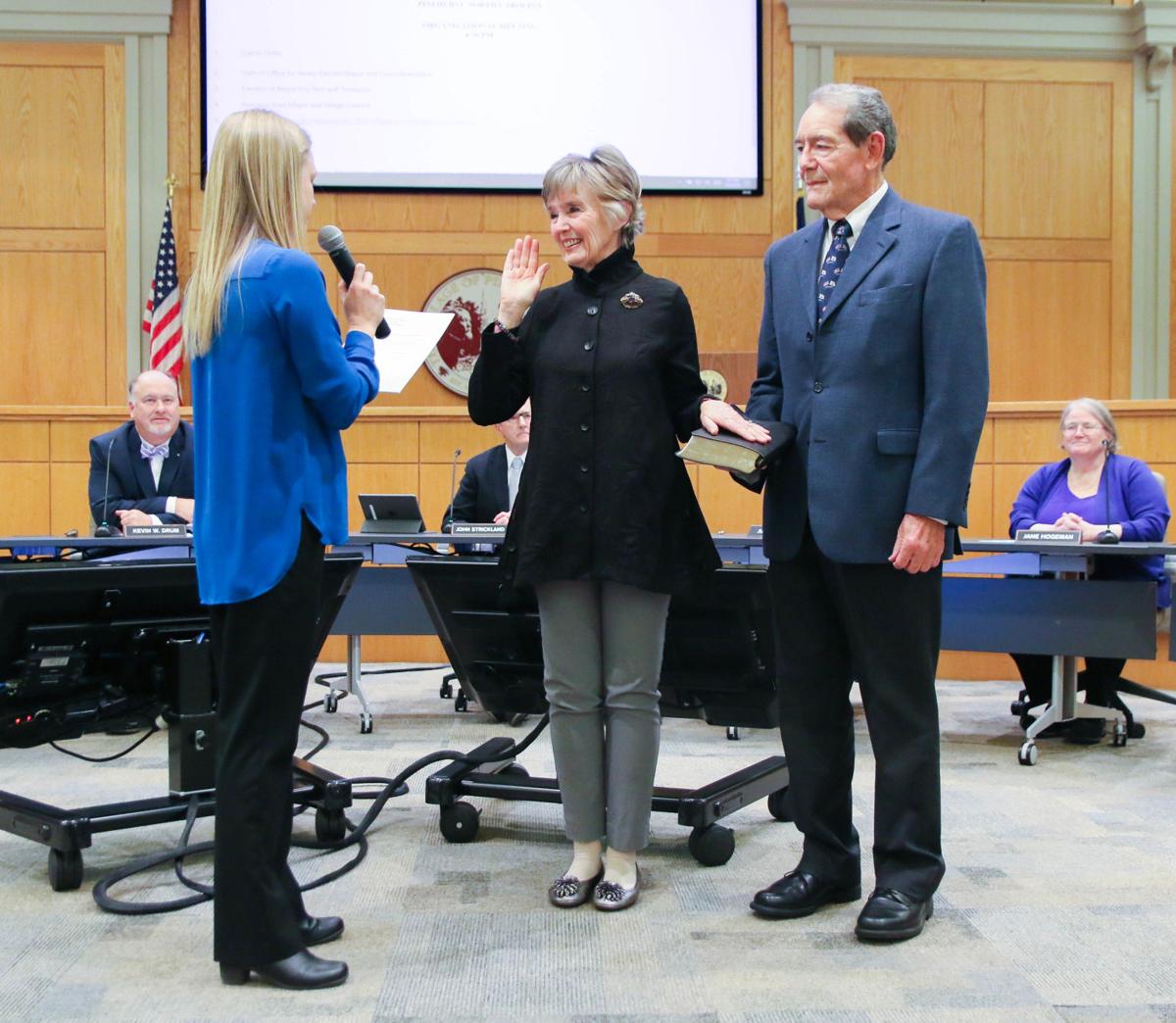 Lydia Boesch is sworn in by Village Clerk Beth Dunn as her husband, John, holds the Bible. 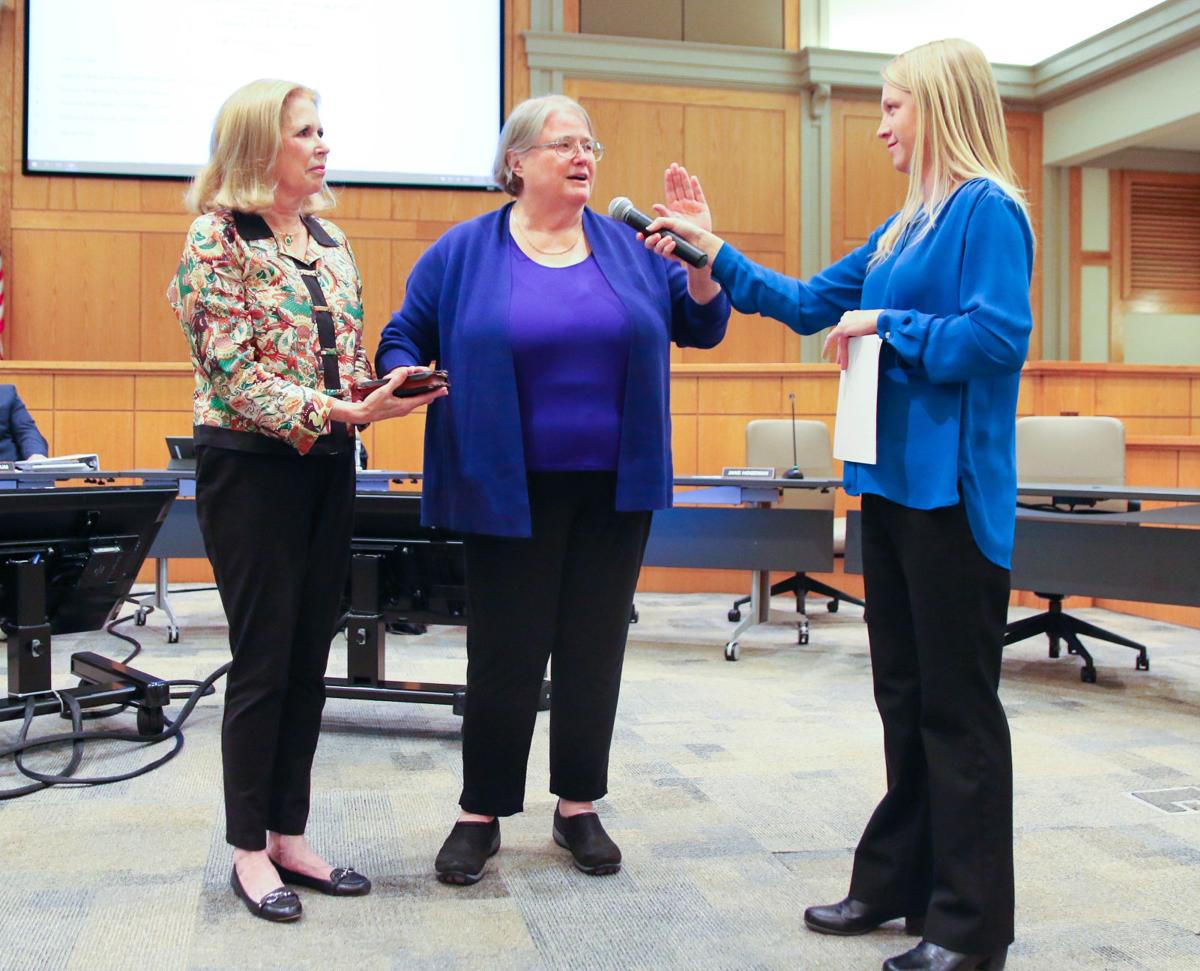 Jane Hogeman takes the oath of office from Village Clerk Beth Dunn as her friend Sue Colmer holds the Bible. It is Hogeman's dad's Bible from World War II.

John Strickland is sworn in by Village Clerk Beth Dunn. His wife, Cynthia, holds the Bible, as their son-in-law and daughter, Bill and Amanda Berg, and their children, Harry, 7, and Emma, 5, look on.

Lydia Boesch is sworn in by Village Clerk Beth Dunn as her husband, John, holds the Bible.

Jane Hogeman takes the oath of office from Village Clerk Beth Dunn as her friend Sue Colmer holds the Bible. It is Hogeman's dad's Bible from World War II.

The village of Pinehurst saw a changing of the guard Monday as three new council members took office.

Mayor John Strickland and council members Lydia Boesch and Jane Hogeman were sworn-in, with family members looking on, and much to the delight of a large crowd of friends and supporters who attended the mostly ceremonial organizational meeting.

After taking their oaths, the new council unanimously selected Judy Davis, one of the two holdovers from the previous council, as the new mayor pro tem. Boesch nominated her for the post.

Hogeman then nominated Boesch to serve as treasurer. Strickland seconded both of their nominations.

Each of the new members then had the opportunity to make some opening remarks.

Strickland quickly touched on growth, which was one of the dominant issues in the recent election campaigns and over the last few years in the village.

“During my campaign I promised to preserve, protect and enhance a variety of what I call ‘Pinehurst values,’” he said. “These values include the quality of our neighborhoods, our independent retailers, our core village, the longleaf pine ecosystem in which we live, our historic legacy and fiscal responsibility.

“The growth we have experienced has challenged some of these values, so the job of this new council will be to create opportunities to maintain these values and resolve the challenges that threaten them. I look forward to working with my council colleagues and building a consensus as we me make decisions.”

Strickland thanked each of the council members, as well as the previous council, including former mayor Nancy Fiorillo.

“I thank them for their service to Pinehurst,” he said. “I hope they will continue to give us their advice and counsel as they see fit.”

Strickland also expressed his gratitude to the large crowd in attendance and urged them to continue coming to meetings.

“I think I might regret what I am about to say,” he quipped. “Judy and Kevin (Drum) might shiver. But I hope we will see many of you back here for our regular meetings … I hope you won’t be strangers to this room.

Strickland, who served one term on the council from 2011 to 2015, defeated former council member Claire Berggren in November in his second bid for mayor. He lost to Nancy Fiorillo four years ago. She did not seek re-election to a third term.

Boesch said she was “absolutely thrilled” to be elected to the council.

“To my fellow council members, I really look forward to working with all of you and the staff,” she said. “This entire staff is an amazing staff.”

Boesch said she also looks forward to working with all of the residents. She joked that she might “follow in the tradition” of Bouldry and make the Roast Office coffee shop her satellite office.

“I want to hear from you guys,” she said. “Let me hear your concerns, how you think we are doing. Come to meetings, like John said. We really want you to be a part of what we’re doing for the next few years.”

Hogeman has been a fixture at council meetings, frequently speaking during the public comment periods, and she has been outspoken on the new comprehensive long-range plan adopted by the previous council.

“I am enormously honored to have the opportunity to serve the people of Pinehurst,” she said. “I want to thank so many people who supported and sustained me during my campaign, and those who set me straight many times.

“I look forward to doing my very best. Thank you for your confidence in me, and that will be returned.”

The only other item of business during the short meeting was the approval of the meeting schedule for the coming year.

The council will continue to meet at 4:30 p.m. on the second and fourth Tuesdays of the month, with the exceptions of August, November and December when only one regular meeting is conducted.

As was the practice this past year, a work session could be held after each meeting, though not every time.

While the vote to adopt the schedule was unanimous, Drum registered the same concern he has in past years that having a work session following a regular meeting “devalues it.” He said the work sessions are intended to offer a chance for the council “to have a dialogue with the public present, and talk things out.”

“I think there is value to work sessions,” he said. “It’s an after thought. I bring this up every year. I don’t know what the solution is.”

Village Manager Jeff Sanborn acknowledged that the staff could do a better job of bringing potential issues to the council for discussion well in advance of any action being required to allow more time for discussion, which has not always been the case in the past.

“We have struggled with that … at least as long as I have been here,” Sanborn said. “We’ll never find a solution that is perfect.

Davis said she was fine with the schedule as it is, with work sessions to follow the regular meeting when needed.

“Work sessions are lightly attended,” she said. “I don’t think they are short-changed.”

Council members agreed to go ahead and adopt the schedule for now and have more discussion at its upcoming strategic planning retreat Dec. 11-12.

The lone regular business meeting of the month will be held Dec. 10.