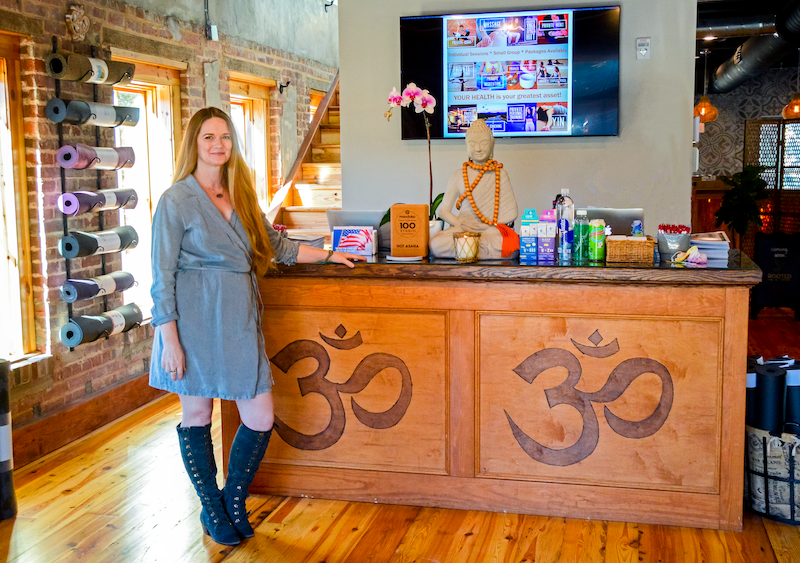 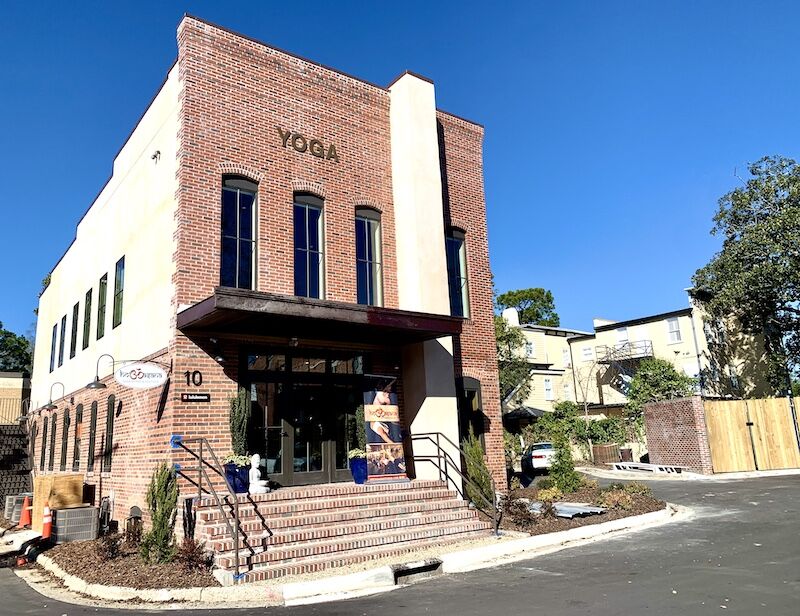 When Virginia Gallagher opened the first Hot Asana yoga studio in 2010, she had three rooms to work with. Nestled above the Sunrise Theater in downtown Southern Pines, the small but mighty studio attracted novice and acclaimed yogis alike — eventually budding into a mini zen empire with locations across the state and country.

Gallagher knew it was only a matter of time before more space would be necessary for the future of Hot Asana. After nearly two years of planning and a little more than a year of construction, she traded those three rooms for three stories and brought her vision to life with the opening of Hot Asana’s yoga headquarters.

Although the downstairs studio, cafe and rooftop aren’t completed just yet, the upstairs studio and fully-stocked retail boutique are in action.

Getting the new space renovated, up and running was nothing short of a challenge. The building, which Gallagher purchased in 2017, was once home to the Jefferson Inn’s laundry services. After sitting vacant and abandoned for nearly 50 years, it needed a great deal of work.

“Pretty much all that was left was the brick,” Gallagher said. “There weren’t even any floors.”

Construction kicked off in November 2019. What was left of the shell of an exterior was salvaged. Among many things, the windows were replaced and the wooden beams of the ceiling were replaced with metal ones to meet fire codes. And as for the floor situation —

“These hardwood floors are made from the original beams,” Gallagher said. “We took them to a wood mill, had them cut and brought them right back here.”

But the building’s history isn’t the only homage paid within the walls of the new HQ. The ashes of Gallagher’s late son, Kevin, are mixed in with the concrete of the building’s foundation.

Progressing During a Pandemic

Construction was well underway when COVID struck in March. Like many things this year, it threw a wrench in Gallagher’s plans. Statewide mandates put a halt on fitness classes in general, and labor and materials became more expensive and harder to find.

“In March, I just took a pause and what I came to was ‘this building will either save me or it will end me,'” Gallagher said. “And then I thought — we’re going to go with ‘save me’ because we have such an amazing yoga community here.”

Designing the space during COVID allowed for additional safety amenities to be put into place. Touch-free toilets and sinks and push doors with a foot pedal were built in, and Lennox Pure Air systems are installed on each floor.

The downstairs studio, the rooftop and the private session room won’t be complete for a few more weeks. However, the plant-based restaurant, Rooted Cafe and Market is set to open in January.

Also in the works are teacher training classes. The training aspect, Gallagher said, was one of her primary professional motivations for building the headquarters.

“People travel from all over the country to train with our teachers,” she said. “I know this area is primarily known for golf, but one of my goals on a professional level is that this will be a hub for training.”

And as for her personal motivation behind starting this new chapter?

For more information, contact mackenzie@thepilot.com. The Hot Asana yoga headquarters can be reached by phone at 910-692-9642.