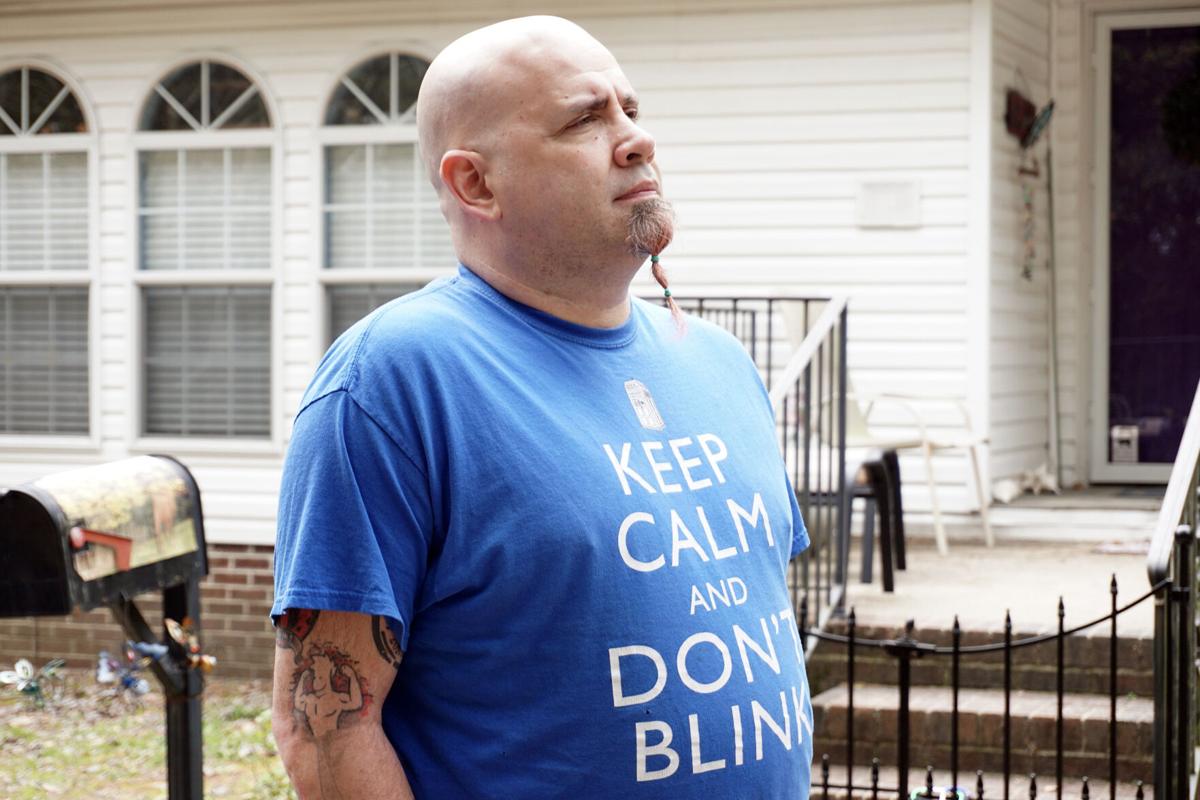 Ronald Rushing Sr. at his home in Southern Pines. He has suffered for months from what is sometimes called Long Covid. 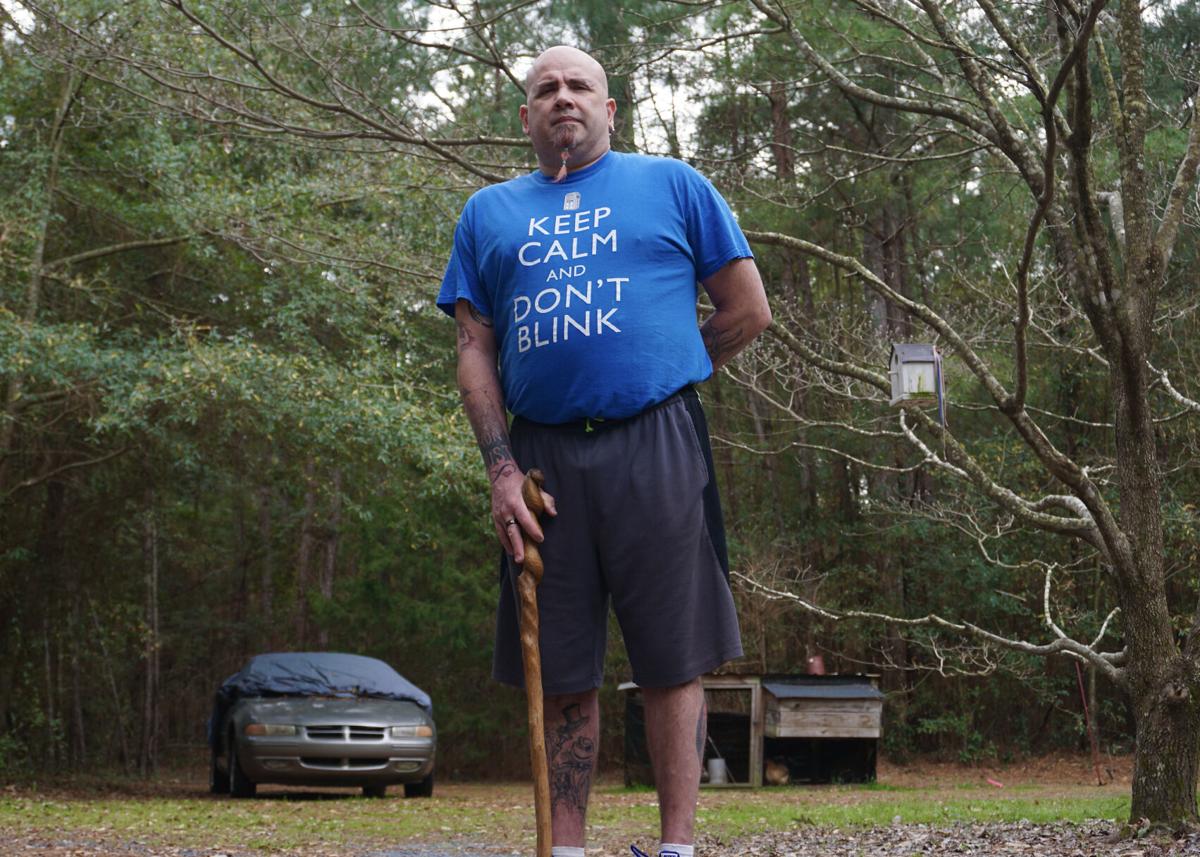 Ronald Rushing Sr. said would run seven miles a week before he was diagnosed with COVID-19 in July. He now uses a cane to walk because he has difficulty maintaining balance. 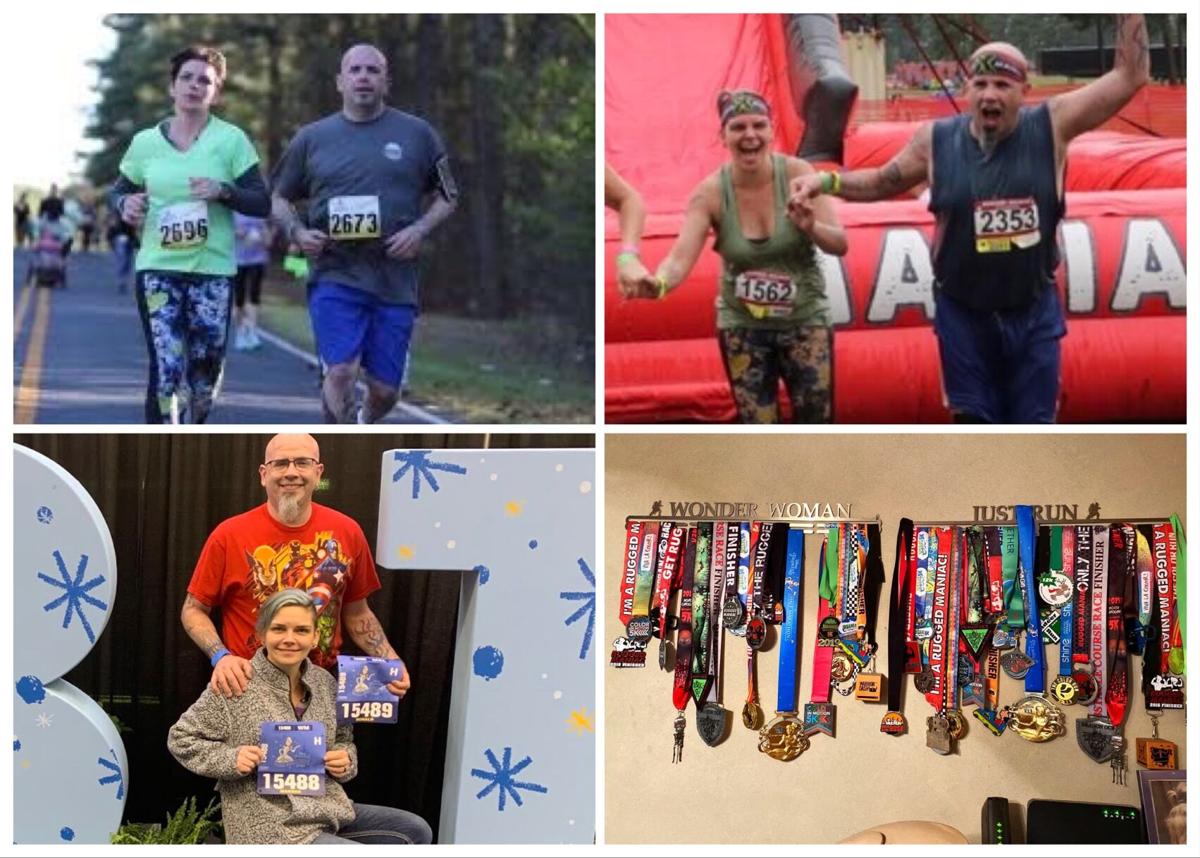 Before he fell ill, Ronald Rushing Sr. regularly ran marathons with his wife.

Over the course of a few months, Ronald Rushing Sr. went from running marathons with his wife to struggling to walk the length of his driveway in Southern Pines.

Rushing, 47, said he was in the “best shape of my life” before testing positive for COVID-19 in July. He now suffers from incapacitating fatigue, unrelenting head pain and a host of other lingering symptoms, with no finish line in sight.

“My brain is on fire from the time I wake up in the morning until I go to bed at night,” Rushing said in a recent interview. “It’s a burning, sharp pain that runs from ear-to-ear all day long.”

Like other people living with what is sometimes called “Long COVID,” Rushing’s issues began after his infection ended. He experienced only minor symptoms in the weeks immediately following his diagnosis, he said.

“When I tested positive, I had a cough and a sore throat, some fatigue and a headache,” he said. “It started out very mild.”

Rushing’s condition worsened while he was waiting for medical clearance to return to his job at Aldi, where he works as a store manager. His intermittent headache turned into a continuous “burning sensation,” he said, and light activity would cause his heart rate to quicken.

“I couldn’t take the dogs out to use the bathroom or roll the garbage to the curb without feeling like I was dying,” said Rushing, who now uses a cane to walk because he has difficulty maintaining his balance.

His symptoms persisted even after he tested negative for COVID-19 in September. He grew forgetful and sometimes spoke with a stutter.

“I started smelling cigarette smoke throughout the day and it constantly felt like there was smoke in my eyes, but nobody in the house smokes,” he said. “I don’t really leave the house anymore because I can’t figure out what I’m doing most of the time.”

When Rushing does go out, it’s often for testing. He has undergone a CT scan, an EEG, a spinal tap and three M.R.I.s in search of answers.“Everything comes back negative,” he said. “You feel kind of alone and lost in the world because everybody thinks you’re fine since you’re no longer infected. You can’t look at me and know my brain is on fire, so you wouldn’t know that I’m sick per se.”

Researchers are only beginning to understand the constellation of post-infection symptoms associated with some cases of COVID-19.

“Most people who get COVID get completely better, but not everybody,” said Dr. Gretchen Arnoczy, an infectious diseases physician with FirstHealth of the Carolinas. “There’s other infections where people have persisting symptoms or changes in function after the infection. And like everything else with COVID, we’re definitely learning (about long-term symptoms) in real time.”

On Tuesday, the journal Annals of Clinical and Translational Neurology published a peer-reviewed study that involved 100 so-called long haulers from across the United States. About 85 percent of participants reported having multiple neurological symptoms that lingered for months.

But the cause of the symptoms remains a mystery.

“It’s really not yet clear if post-COVID symptoms are due to the persistence of the virus or the virus tripping off something in the immune system, or damage from the virus itself,” Arnoczy said. “Some people have scar tissue in their lungs after COVID, and their symptoms are not due to the virus but the damage that the virus did, even though the virus is gone.”

While there is no approved treatment at this time for Long COVID, preliminary findings from a small observational study conducted by British researchers suggest that vaccination may alleviate some persistent symptoms. The study, which has not been certified by peer review, focused on older patients who were hospitalized with COVID-19.

Rushing has only visited the hospital once during his eight-month ordeal. It was Jan. 6, and he was eating dinner at home with his wife and their young children.

“All of a sudden, I felt like I was drowning,” he said. “I felt like there was liquid shifting back and forth in my brain. It was the most afraid I’ve ever been in my life.”

The doctors, Rushing said, “chalked it up to an unknown neurological episode.”

Five months before he tested positive for COVID-19, Rushing ran a marathon with his wife at Walt Disney World Resort in Florida. A wall of the couple’s home is festooned with medals and ribbons from the many races they’ve competed in together.

“He went from being extremely active to just laying in bed because he can’t do anything else,” Marsha Rushing said of her husband’s condition. “He’s basically in constant pain now. He’s not able to do family stuff like we used to without him being in excruciating pain.

“If he goes out to the store with us just to get groceries, he’s in bed for the rest of the day because it’s too debilitating. He can’t even sit at the table and eat dinner at night without being in pain.”

“They said my symptoms shouldn’t interfere with my work,” he said, adding that he is in the process of appealing Cigna’s decision.

Rushing will undergo another round of testing next week. He hopes to receive a referral from his primary care physician to participate in a clinic for long haulers that was recently launched by the University of North Carolina at Chapel Hill.

“I would jump on one foot naked in a pond for answers at this point," he said.

Mr. Kuhn, the voice of reason is like fresh air. Thank you.

Best wishes to you. Hopefully, total recovery and respite from suffering are in your near future.

Mr. Rushing, my heart goes out to you sir. I don't like to see anyone suffering and in pain like you are on a daily basis. I hope that they can find a solution for you really soon. My thoughts and prayers are with you and your family at this time.

Thank you for sharing this story. This is a heath crisis that will linger beyond the pandemic. People who “aren’t afraid” of Covid or think it’s okay to avoid vaccination should read this carefully. It can happen to you.

Ritt, As a doctor you should not be promoting fear. I am not afraid, as that is no way to live. And I will not be subjected to an experimental vaccine. What ever “happens” to me or you is God’s will. Wake up.

Your willful promotion of disinformation is what causes fear. The vaccine is not “experimental”. mRNA vaccines have been around for decades, and the J&J vaccine is a traditional adenovirus delivery design. I’ve taken years of training in immunology, microbiology, histology, pathology, human anatomy, and organic chemistry. I am by no means an expert on vaccines, but I am certainly more well-versed than the sources of disinformation and pundits who are promoting lies and ignoring facts. The vaccine has been proven safe and effective. The data supports this, it’s not a debate. These are facts.

As far as the article, my wife is a Covid long hauler, I know what I am talking about. There is no way to know who will suffer these long-term effects and who will suffer mild disease with no lasting health problems. Trust me, you don’t want to be in their shoes. If you choose to avoid vaccination, you are increasing the likelihood of you (however inadvertently) causing someone else’s infection.

It is like slowing down your car when you see someone trying to cross the road with their pet. You would do everything you can to be cautious around someone who may be more vulnerable than you. I have seen you comment publicly on those who did not show you courtesy and consideration when trying to cross the road near your house. It has been a few years since then, maybe your attitude towards respect and decency have changed. I know you are a generous man, I just don’t understand the disconnect. As for God-I’m no religious scholar, but I’m pretty sure I know what Jesus would have do. (He’d take the vaccine.)

My advice to you personally, because you hate the masks so much, is to take the vaccine. It is the ticket out of this mess. We have devolved as a country and a civilization and have politicized a public health triumph. We are acting like a petulant child who refuses to take the medicine that’s being offered to him.