Twenty-two counties in North Carolina have a different economic “tier” designation going into 2021, but Moore County isn’t among them.

The roots of the state’s three-level tier system date back to the 1980s. It is used to determine each area’s relative prosperity or distress, calculated annually. That calculation includes a county’s average unemployment rate, median household income, percentage growth in population (for the most recent 36 months), and adjusted property tax base per capita.

Moore County consistently ranks in Tier 3, meaning it qualifies for little, if any, assistance from the state for a variety of programs. 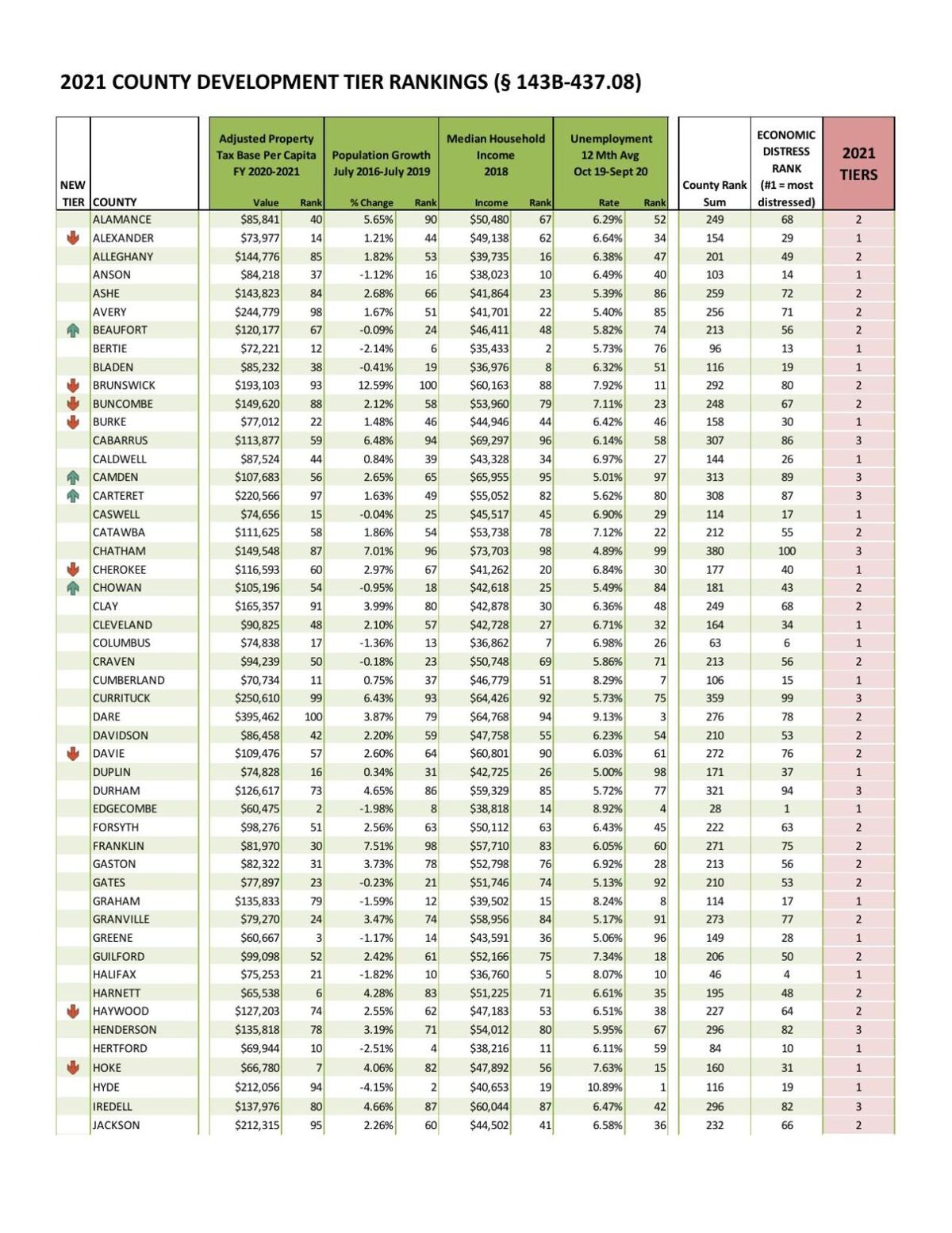 By contrast, all of Moore’s neighboring counties along its southern border are ranked Tier 1, including Richmond, Scotland, Hoke and Cumberland counties. Directly east and west of Moore, Montgomery, Lee and Harnett counties are ranked Tier 2.

Only Chatham County to the north is also ranked Tier 3. Moore and Chatham are similar in that their counties experience “split prosperity.” Chatham’s northern stretch, which borders Chapel Hill, accounts for its Tier 3 status, while Moore’s southern communities of Pinehurst, Southern Pines and Aberdeen account for its economic strength.

“The current method is archaic and no longer reflects reality,” said Pat Corso, executive director of Partners in Progress, the county’s economic development arm. “The bottom line is distress does not respect county lines and the system treats each county like it is an island unto itself.”

There are seven or eight counties like Moore and Chatham, where economic prosperity is in one concentrated area while other parts of the same county may be highly impoverished.

“The system is what it is because it’s easy to say you have 40, 40 and 20. And the way the tier works, it applies to so many programs. If you reform it, you’re not just reforming one aspect of economic development. You have to reform the whole thing,” said Corso. “It’s not like this hasn’t been studied to death. The challenge is that there is very little appetite in the General Assembly for reform.”

There was a push for legislation last year to grant rural Tier 3 counties access to some assistance for projects in distressed areas. This would have meant potential funding for infrastructure improvements only, like roads or sewer lines, but the legislation didn’t advance.

“We complain about the tier system,” Corso said, “but there has not been an extraordinary effort to address its inequalities: its unfairness. Distress is all around us.”

A better model, in his view, would be a restructuring of the tier system to allocate resources where they can be most beneficial on a regional level.

Southern Moore County, specifically the Aberdeen, Pinehurst and Southern Pines “micropolitan” has an economic impact that extends far beyond its boundaries. In fact, for the third consecutive year Moore County has ranked as the top micropolitan in North Carolina and in the top 10 percent nationally in terms of economic strength for a small economy.

Corso said a better tier system would recognize the interdependence between counties, pictured as a hub-and-spoke economy.

Moore County is an example of such a hub, with approximately 15-16,000 people commuting both in-and-out of the area daily for work.

“Companies are looking for areas with interstate access and infrastructure like natural gas lines. You start looking at the economic development checklist and most rural counties get dismissed fairly quickly,” he said. “But if you could look one county over (from the distressed area), they might meet the company’s criteria.”

“Our strength is in how we really do work and that is in clusters.”

Welfare in all its forms steals from the successful and enslaves its recipients. The decay of the nuclear family and once-vibrant inner cities as a result of welfare prove this. The best solution is no welfare, no redistribution of wealth, and a return to private charities as the the best means to help the truly needy. Poverty used to be one of most powerful incentives to self-improvement.

Well, if the religious infrastructure that gets a tax-free ride was functional and working with the community there would be less welfare and more support for single mothers. Supporting birth control and offering child care so mothers can go back to school and become working members of society would go a long way to eliminating the numbers on welfare.  Taking on the adoption business making it a positive move for pregnant women to put their unwanted children up for adoption would also support people to keep off of welfare and decrease the number of abortions.  Where are the religious institutions that already have the infrastructure in place in our communities stepping up to make a difference?

As I recall, The Pilot took Jamie Boles to task for voting for keeping Moore County in Tier 3. It took him to task for several things, but still continued to endorse him.

The trio of two cities and a village are the only areas of prosperity in Moore County. The tier system deprives the county as a whole which is clearly unfair.

I am not sure how this issue can be politicized. As the article states "Southern Moore County, specifically the Aberdeen, Pinehurst and Southern Pines “micropolitan” has an economic impact that extends far beyond its boundaries. In fact, for the third consecutive year Moore County has ranked as the top micropolitan in North Carolina and in the top 10 percent nationally in terms of economic strength for a small economy. It looks like many that come to work in Moore County live in a Tier 1 or Tier 2 and will get their assistance.

The tier system has been a problem since its implementation in the 80s. And, can likely be addressed by any DEM representative who can take on that project. I think we all need to rethink why Moore County is a place where people come to live. Many move to Moore County because of weather, leaving a high tax base and to live in a safe community. The public schools? Not so much. Americans need to join together instead of choosing a party to identify alongside. Stop politicizing everything and join alongside ALL Americans to keep progressive, socialist and communist ideals at bay. We are going to have a very challenging 4 years ahead in respect to that nonsense.

I believe the tier system clearly transfers wealth from richer locales to poorer locales. I'm not going to say it's wrong but that is socialism.

It does seem like the tier system is used to push state taxes paid by the wealthier citizens to the poor ones. And, as for socialism, the next four years America will definitely be headed in that direction, for sure. The DEMS have said it, majority of Americans voted for it, so here it is. The tier system in NC will be nothing compared to what we are going to see in the future of America. The new VP is one of the most progressive and socialist senators of our time. It will be interesting to see where Bernie Sanders ends up serving in Biden's cabinet. Once he's inaugurated we will find out. Gotta keep that one under wraps until it's a sealed deal.

It's the hypocrisy that drives me nuts. Republicans drummed up the "Socialist" label to scare voters away from the Democratic Party. It worked. However the Republican led NCGA continues to support this massive redistribution of wealth called the Tier System. I wouldn't mind it if they weren't so dishonest about it. Call it what it is - Socialism in the purest sense of the word. So, if we can agree that Republicans actually support some Socialist ideals we can have reasonable conversation.

Kathy, you will certainly be criticized for your honesty, but it will come from those you would never go to for advice to begin with. What DEMS politicians have in mind, is putting the key of others financial success , into their own pocket , used to finance their own agenda, think, Hitler's " the peoples car ", Stalin's " the five year plan ". The Democrats victory may very well be what was needed, it will wake up a population of voters, those who had been too young to understand the consequences of their vote this election. Now themselves, joining the workforce, an income statement often is a wakeup call for those who watch their earnings being confiscated, distributed by politicians that have access to those funds. Parting ways with a particular political affiliation is much easier than parting with ones money.

Reading what people claim to know as truth is getting comical around here.

Barbara, this article is about receiving state assistance for poorer areas of our state, not taking wealth away from the rich to pay for the poor.

I believe the tier system clearly transfers wealth from the people to the rich in the form of tax breaks, TARP, and interest free loans. I'm going to say it's wrong, but that is socialism for the rich.

What are the "progressive, socialist and communist ideals" that you fear Kathy? Could you expand on this statement? What does being a "socialist" mean to you? What does being a "communist" mean to you? What does being a "progressive" mean to you? As you list the three ideologies separately you must understand the nuances inherent in the labels. Or are you just parroting learned propaganda? One little fact for you: During the 1960s there was a "socialist" movement in Indonesia through a political party called the PKI. They had no guns and no intention to do anything other than improve the living standards of the people. Sukarno was planning on nationalizing the oil in the country so the people would benefit. The USA (think CIA) invested a great deal of money and effort to thwart the movement of farmers and workers by arming and training factions in the military ( Think kill squads-a common USA tactic). It is a little more complicated, but the result is that because of the USA effort millions of Indonesian women, children, and men were murdered for the crime of making their country a little more "progressive." The ant-communists representatives of the USA government raped, murdered, tortured, and imprisoned millions of people so our capitalist system could blossom in the blood bath. What exactly are your "ideals?" I can recommend a book.

This tier system would seem to indicate that Lowell.