The school board unveiled a second draft of a districtwide overhaul of Moore County Schools’ attendance areas on Monday that more closely resembles the schools’ current attendance lines than its initial redistricting proposal last month.

Last year, the district began the process of reevaluating attendance lines to incorporate the four new elementary schools opening in the next two years. The school board designated sections of the current Vass-Lakeview and Sandhills Farm Life attendance areas as the 2019-2020 attendance area for the new McDeeds Creek Elementary on Camp Easter Road.

While the broader plan has the same ultimate goal – to shift students from crowded schools to others where space is available – it will have significant effects at almost every school in the district.

What the schools’ consultants presented on Monday as “Draft 2” of the reassignment plan factored in parent feedback from a pair of community meetings last month at New Century and Southern Middle as well as online forums. 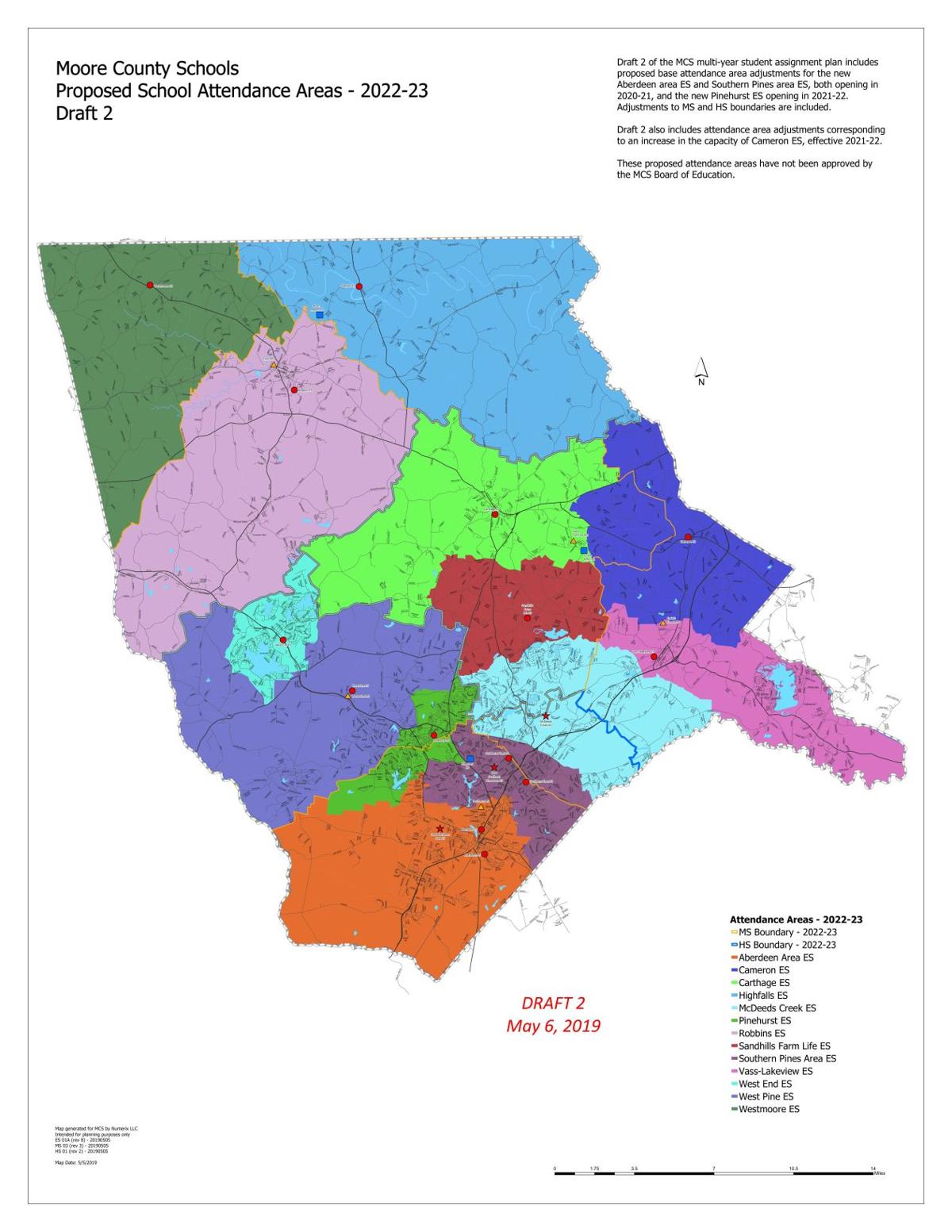 Traffic involved along the route to and from their children’s schools was chief among their concerns, as were divisions of residential neighborhoods like Lake Pinehurst. Others sought the option to request transfers either before redistricting takes effect or to delay it for students in their final year of elementary, middle or high school.

More adjustments may come before the schools finalize a redistricting plan this fall. Laura Evans with Numerix, the consulting firm the school board hired last year to formulate potential redistricting plans, said when presenting the second draft that the proposal attempts to strike a balance between the school board’s priorities. Such competing goals include utilizing all schools evenly, operating efficient bus routes and minimizing students’ travel times, and keeping neighborhoods together.

The updated redistricting proposal involves half a dozen significant changes to the first proposal for elementary attendance lines. Of those, four represent reversions to the current attendance areas.

Like the first draft of the plan, the second proposal would redistribute the district’s enrollment more evenly across its schools so that in 2022-2023 – the target year for the schools’ enrollment projections and when the plan would be fully implemented – no elementary school serves more students than it was designed for.

Broadly, that means drawing students north – shifting them from crowded elementary schools like West End, West Pine and Vass-Lakeview and moving students into Westmoore, Highfalls and Robbins where the population is now dwindling.

The area west of West End between N.C. 211 and N.C. 73 would be in the West Pine Elememtary district in an effort to control growth at West End.

Where Pinehurst Elementary is concerned, the revised version of the redistricting plan is less ambitious when it comes to controlling enrollment.

The new proposal would bring more of the Lake Pinehurst neighborhood into the Pinehurst Elementary attendance area. Where the initial proposal divided it between Pinehurst and West Pine, the second draft moves the boundary between those two schools to Linden Road.

In 2022, the new 800-student Pinehurst Elementary building on Dundee Road is slated to enroll about 631 students if attendance lines are left as they are. Both drafts of the redistricting plan would effectively move students there if the schools’ enrollment projections hold true. Under the second draft of the plan, Pinehurst will be close to capacity with 780 students the year after it opens.

At the new Southern Pines area elementary school, its boundaries would extend to the Pinehurst traffic circle along U.S. 15-501, moving Pinehurst National into its attendance area.

Between the Southern Pines and McDeeds attendance areas, the boundary has shifted from the first draft.

McDeeds will grow significantly in 2020 from the initial attendance area the school board carved out last year, which puts less than 500 students there for this fall.

In the new proposal, the line between Southern Pines and McDeeds shifts north to Midland Road. Southeast of U.S. 1, the line will continue along Yadkin Road.

The new Southern Pines and Aberdeen area elementary schools are slated to open next year in Morganton Park North and off of N.C. 5 respectively. As 800-student schools, they will each combine the populations of the separate K-2 and 3-5 schools now serving each town.

“We’re in a rural community. We don’t have the luxury to have small schools in every corner,” said Chair Helena Wallin-Miller. “That’s just not feasible in this environment, to be able to have small neighborhood schools. As nice as it would be, I think we really have to be good stewards of the finances that we have and with these larger schools we’re going to be able to staff them appropriately.”

Under the newest proposal for redistricting, the feeder elementary schools in the Pinecrest area would enroll about 3,000 students in 2022. That’s 180 less than those schools are projected to serve if attendance lines are left as they are.

Southern Middle and West Pine, the two middle schools that now feed into Pinecrest, were both built to serve 700 students. Southern is currently at capacity while West Pine is about 130 students over.

“The four middle schools in the southern and eastern portion of the county are sitting at about 100 percent (enrollment) between all four of them, so there’s not a lot of wiggle room,” said Michael Miller with Numerix.

By 2022, West Pine is projected to grow to more than 930 students. By that point, Southern is expected to enroll 300 fewer than that. Like the initial proposal, the second draft would move about 130 middle school students out of those two schools. They would both still be crowded, but more evenly so with 782 students at Southern and 708 at West Pine.

Crains Creek and New Century, which now serve Union Pines, would gain about 50 students between them. The North Moore-area middle schools would gain 80.

The revised proposal streamlines student feeder patterns from elementary to middle and then into high school from what was originally presented last month. However, it still leaves four elementary schools feeding into two middle schools.

One of them is McDeeds Creek, where an unconventional feeder pattern has long been suggested as a possibility.

“It is a new school so it’s the place where you end up accommodating a lot of the shortcomings of your current assignments,” said Superintendent Bob Grimesey. “As the new school, it’s right there on the fault line between Crains Creek and Southern Middle School, Union Pines and Pinecrest.”

McDeeds students living on the northern outskirts of Southern Pines would go from Crains Creek to Pinecrest. All students at New Century would attend Union Pines, as would Lakeview area students.

From Pinehurst Elementary, students living north of the line placed along Linden Road and N.C. 2 would attend West Pine Middle while students south of it would go to Southern Middle.

The Southern Pines area elementary school would send students to Crains Creek and Southern. Pennsylvania Avenue, and Connecticut Avenue on the east side of May Street, are proposed as the determining line there.

As it does now, Cameron Elementary will continue to send students to New Century and Crains Creek.

In the revised proposal, attendance lines in central Moore put all of Carthage and Sandhills Farm Life elementary schools at New Century Middle rather than splitting off small areas to attend the West Pine schools and Pinecrest as the initial draft did.

“As much as I hate to see middle schools having to split and go to different high schools, and even elementary schools splitting to go to different middle schools, that’s the future for us,” said Vice-Chair Libby Carter. “As we get larger and larger it’s going to happen more and more, and until we can build additional schools – which will just increase the number of splits – it’s something our children truly will benefit from because they’ll have a much broader circle of friends.”

Looks great as long as the elite pinehurst children don’t have to mix with “those children” from southern pines and Aberdeen. Can we guarantee that a least until high school?