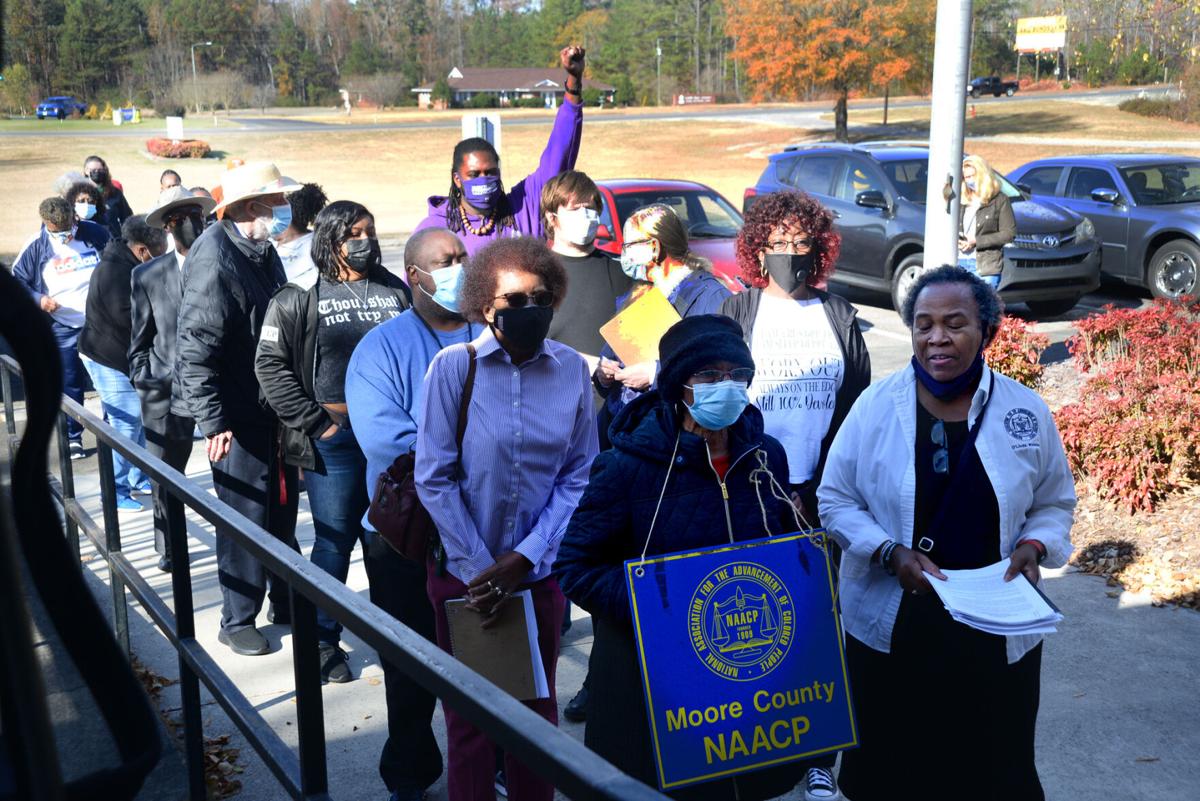 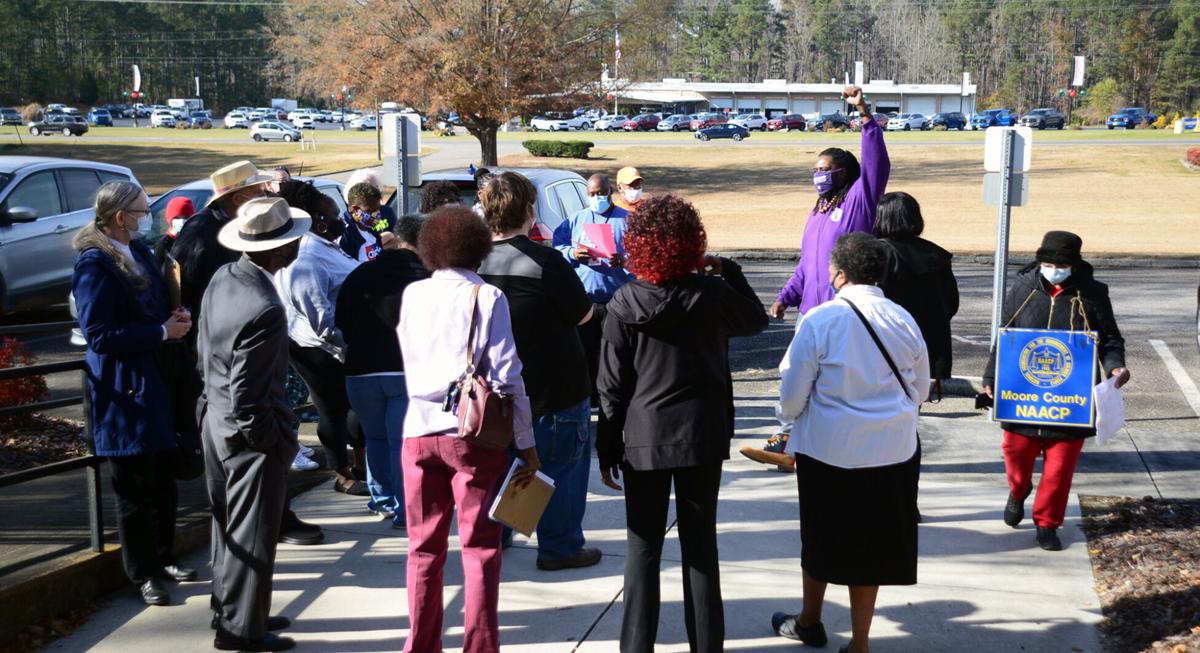 Members of the Moore County NAACP members gather outside the Moore County Schools Central Office on Thursday after dropping off petitions that ask for better working conditions for bus drivers, custodians and support staff. 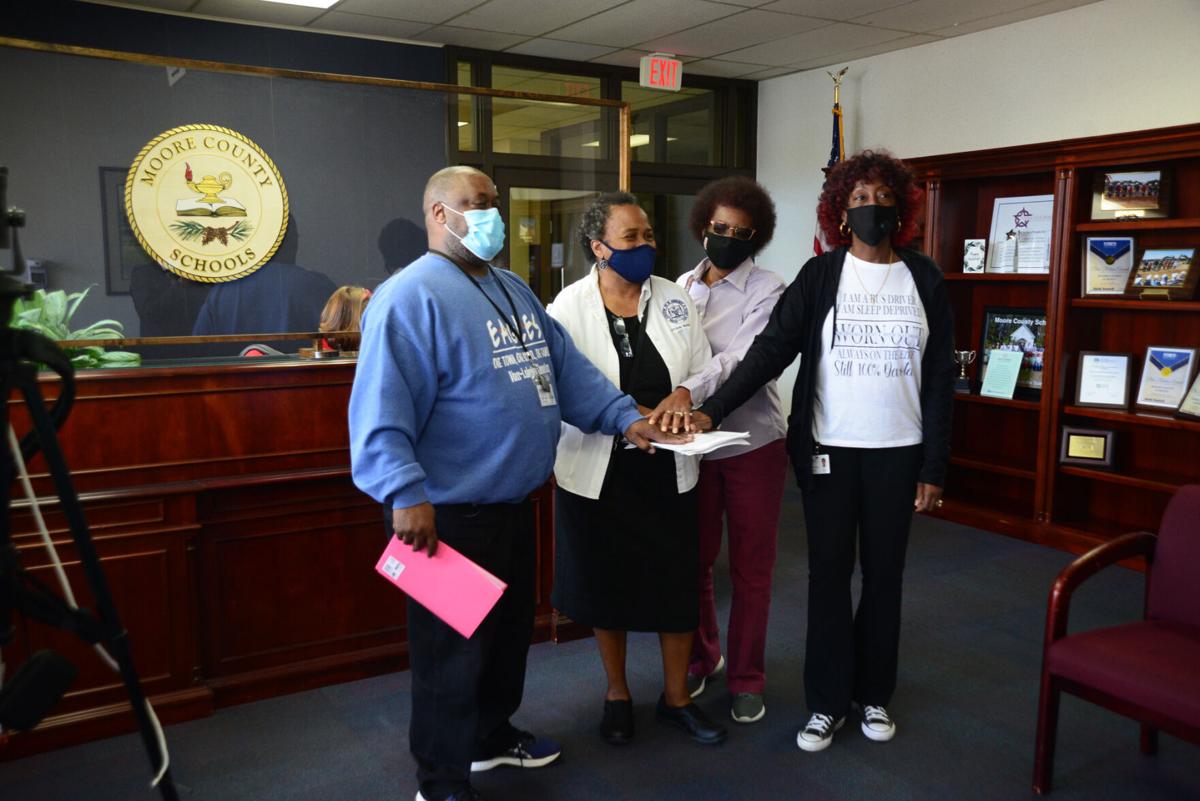 Moore County Schools’ struggles to recruit enough teachers and bus drivers to keep up with its growing enrollment predate COVID-19; the pandemic has only exacerbated the situation. Districts essentially compete with each other to attract staff, and sometimes keep the employees they have.

Over the past few months, districts around the state have approved hefty employee bonuses. In some cases those bonuses have been prompted by scores of bus drivers and cafeteria workers who have coordinated sickouts in protest of their working conditions.

That money isn’t only going to teachers: many school systems are paying out the same bonus across the board to custodians, teacher assistants, bus drivers and office staff alike.

Wake County Schools will pay all full-time employees $5,000 in bonuses over the next two years.

But it’s not just large urban school districts. Randolph County Schools paid that same amount in a lump sum last month to all established full-time employees, regardless of their job description. Even closer to Moore, Lee County School paid a $2,000 bonus to all full-time staff in November. Cumberland County Schools issued a $1,000 bonus in October and plans to pay out two more in December and May.

In Moore County, it’s been almost a year since the school board used money from the initial CARES Act stimulus to provide a $200 year-end bonus to support staff only, not including bus drivers. That omission is among a list of grievances that members of Moore County Schools’ transportation staff relayed to the school board during its November meeting.

On Thursday, bus drivers joined with the Moore County NAACP to reiterate their position. A group of about 25 people, including other school support staff, gathered outside the district’s central office while chapter president O’Linda Watkins-McSurely presented their petition to Anita Alpenfels, the district’s executive officer for human resources.

The newly formed Moore County Schools Service Employees’ Association represents those who work in any “classified” position in the schools that does not require licensure. The group is asking Moore County Schools to offer those employees an end-of-year bonus payment from unspent COVID-19 relief funds.

The petition also outlines demands for:

• A joint employee-human resources task force to codify “the rights and responsibilities of the classified employees who interact with students and teachers;”

• A more timely and effective response to student disciplinary issues on bus routes;

• Driver input to be considered by the school board and administration on transportation issues; and

• Monthly meetings of all transportation staff as well as meetings with other classified employees.

While employees of different races are represented in all positions within the district, most of the district’s Black employees fill supporting positions. About 16 percent of Moore County Schools 1,700 employees are Black, but only 5 percent of its teachers are.

“Although some of us are white, we are all trapped in historic lower pay grades set during Jim Crow as ‘n-word’ and ‘Black’ jobs,” driver Beverly Davis read from the petition.

Davis took up bus driving while still in high school herself, and returned to the wheel after a 25-year career in mental health. She said that she and the other drivers who addressed the school board last month declined invitations from Moore County Schools to meet one-on-one.

“We decided not to meet individually, that we’re going to do this collectively. Unified, as a group,” she said.

Teachers also see in the stimulus funding an opportunity for the district to compensate them after the volatility of the last two years.

Federal guidelines for the use of COVID-19 relief funding allow the money to be used for employee recruitment and retention. Such bonuses aren’t part of Moore County Schools’ plans to allocate its $25 million in federal stimulus funding.

The spending plans approved by the Moore County Board of Education cover additional teacher assistants and summer learning programs to help counter learning lost when schools shifted to a virtual format.

That money is also going to cover expanded technology and to maintain locally paid staff that would otherwise be lost as the county’s operational funding to the schools remains fixed while expenses increase. About $11 million of relief funding has been designated for building improvements that qualify as eligible expenses: those that deal with air quality and facilitating outdoor activities.

Luke Arno, an elementary school music teacher and president of the Moore County Association of Educators, is surveying teachers to determine what level of retention bonus they’d rally behind. He’s also asking whether or not teachers would support the addition of a “wellness” or “mental health” day, offset by extra hours worked into the calendar above the state’s minimum, in place of a normal school day in the calendar this year.

About 20 other North Carolina school systems either canceled school on Nov. 12 — the day after the holiday set for Veterans Day — or extended the Thanksgiving break. Moore County Schools has held off on that, since it would put families in the position of finding childcare and hourly employees out of pay for that day.

Arno encouraged a group of about 20 teachers who attended a virtual meeting last month to speak during the school board’s Dec. 13 meeting if they support either measure.

“Teachers used to come to Moore County from across the state. Unfortunately right now I know of several teachers who are leaving Moore County, who are going to other districts, who are retiring early, who are just feeling they want to pursue a different calling,” he said.

"About 20 other North Carolina school systems either canceled school on Nov. 12 — the day after the holiday set for Veterans Day — or extended the Thanksgiving break. Moore County Schools has held off on that, since it would put families in the position of finding childcare and hourly employees out of pay for that day." Thus perpetuating the idea that school is a babysitting job not an educational one. Teachers and students need breaks from the stressful situation we have all faced this year. Your focus needs to be on the needs of the staff and students. The parents are responsible for their own child care.

That the employees had to form a group because their individual requests were not being met puts Moore County under a microscope. The support staff are not volunteers but it seems that's the way they are treated. It's time the county paid their entire staff what they are due.

Contact our Commissioners. Other than advocating for funding allocations for services provided by the district,the School Board and the school district administration has nothing to do with the amount of funding they are allocated from County tax revenues. Our 5 Commissioners make all local school funding decisions.

Many of you may have read my comments before about our County Commissioners eliminating at least $2,000,000 from District budget requests in each of the last 2 years. Support staff increases were not implemented as a result. County employees, on the other hand, did get increases. Why? Obviously, our Commissioners are "reluctant" to increase property taxes by any amount, even to satisfy the pressing need to financially support those essential individuals who work in our schools and provide others the opportunity to go to work to earn their sustenance.

That may be true but it doesn't account for the over $600,000.00 f3om the cares act money the county received that the BOE decided to put away in a account instead of using it to take care of the support staff. Oh yeah they gave everyone but the bus drivers a measly $250!!! Time to stop making excuses

I'm with you. We need to properly compensate all school district employees, not using just Cares money on a one time basis, but every year.