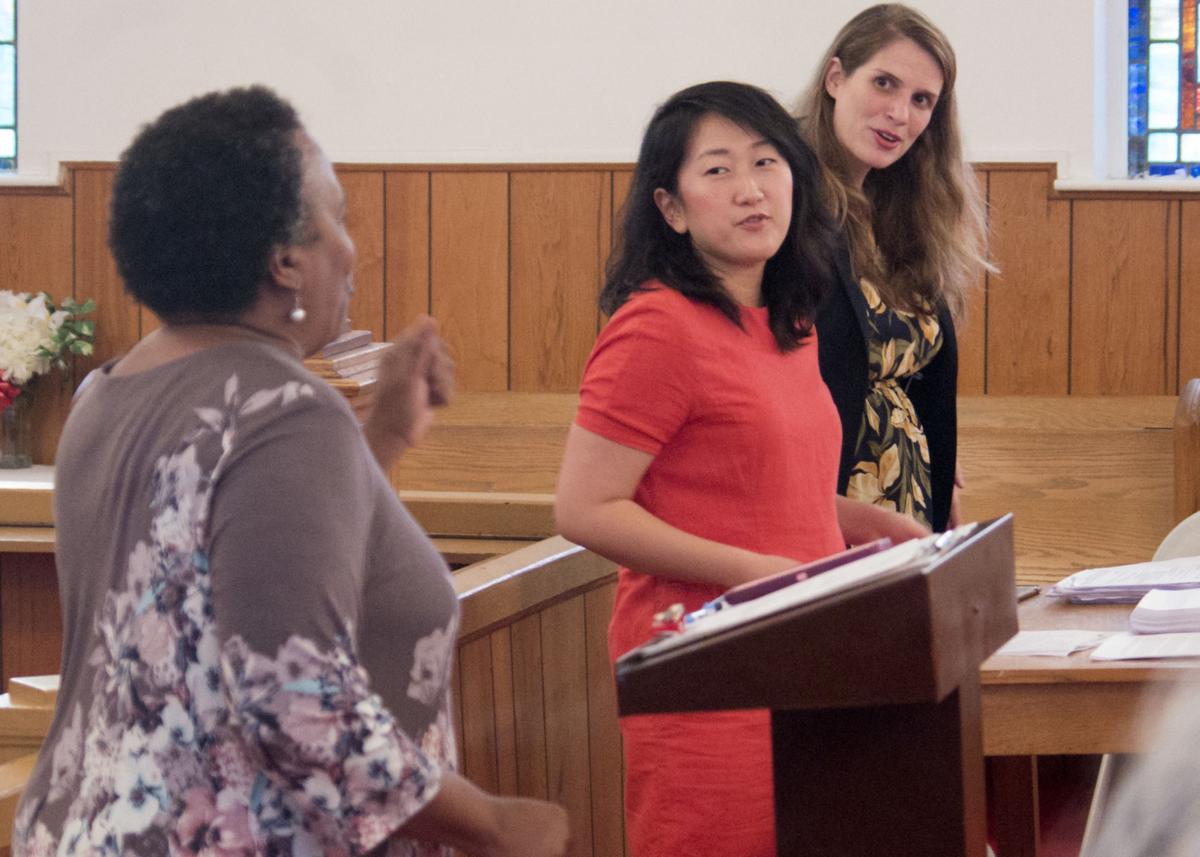 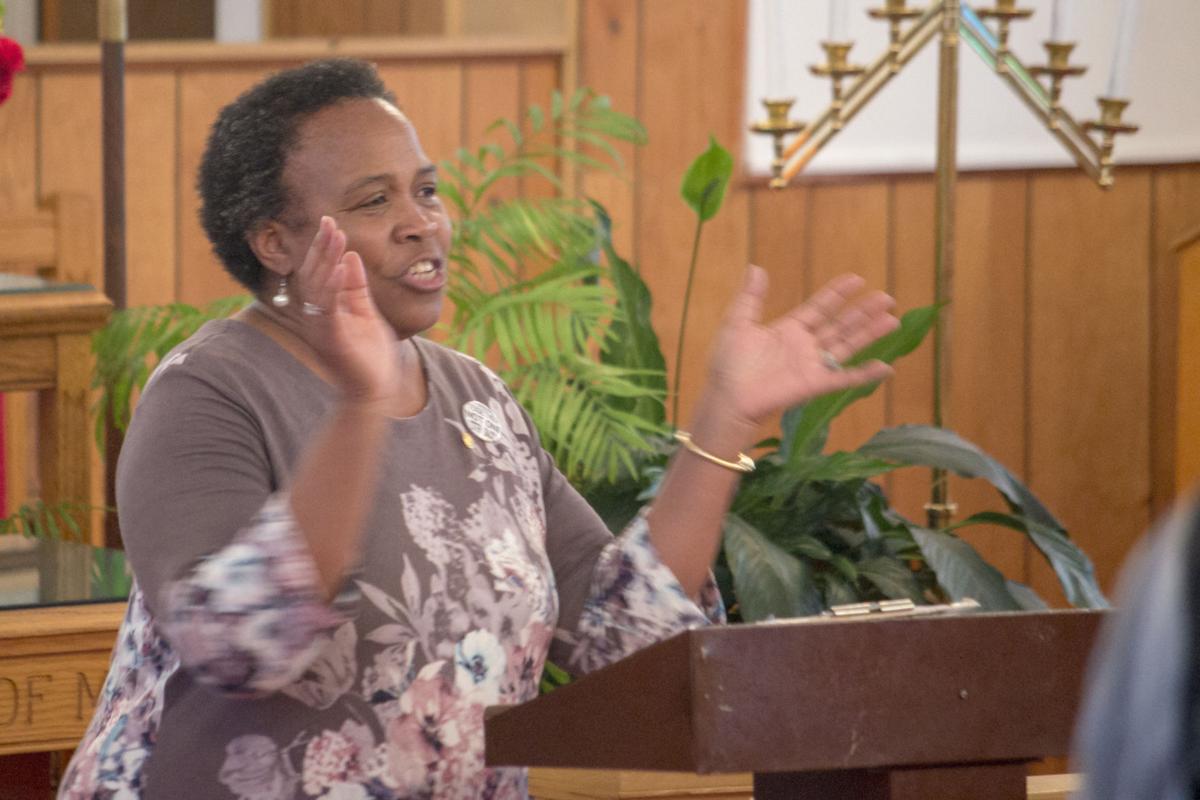 O’Linda Watkins-McSurely, president of the Moore County branch of the NAACP. 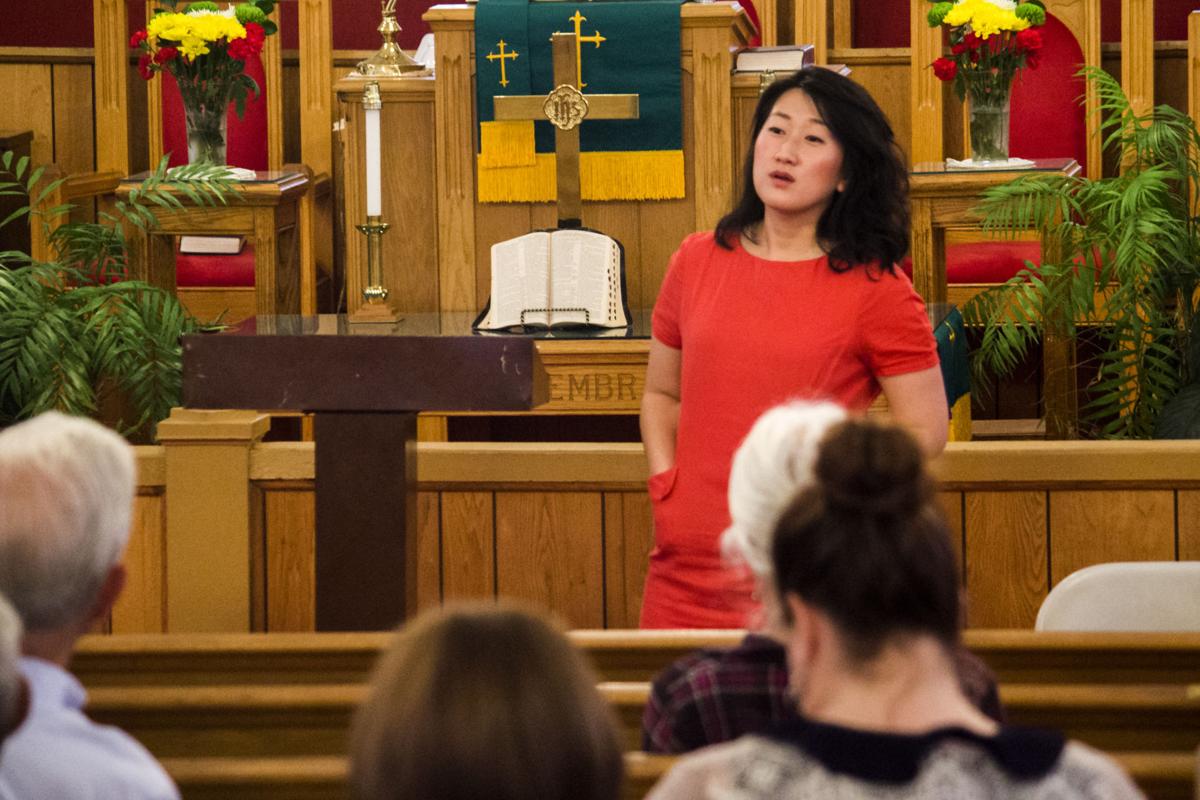 Leah Kang, an attorney for Forward Progress, speaks during a Moore County NAACP meeting on Aug. 27, 2018.

Lawyers are crediting the Moore County branch of the NAACP as the driving force behind a recent federal court decision that prevents voters from being purged from the rolls because of undeliverable postcards.

Leah Kang, a civil rights attorney from Durham, said the case “bubbled up” from work done by the Moore County NAACP ahead of the 2016 general election. Members of the Moore County NAACP found that nearly 500 local voters had been expunged from the rolls by the county Board of Elections after postcards sent to the voters’ home addresses were returned as undelivered mail.

Similar purges, it was later found, were happening in Cumberland and Beaufort counties. A lawsuit was brought against the State Board of Elections and against the Board of Elections offices in Moore, Cumberland and Beaufort counties, with the plaintiffs arguing that the postcard-based purges were a violation of the National Voter Registration Act.

“It was an absolute violation of federal law,” said Kang, who represented the Moore County NAACP in the lawsuit. “Federal law tries to protect voters from being removed for something as stupid, really, as a returned postcard.”

An emergency injunction was granted to ensure the residency challenges would not prevent voters from casting ballots in the 2016 election. Earlier this month, Judge Loretta Biggs issued an order to extend the injunction permanently.

“The uncontested facts show that the Moore County Board violated the NVRA’s prohibition on removing a voter from the rolls during a federal election cycle on change-of-residency grounds (…),” Biggs wrote in the order, which was signed on Aug. 8.

Speaking during the monthly meeting of the Moore County NAACP on Monday in Southern Pines, Kang called the decision a “victory over illegal purging.”

“Because of your legal victory, no county boards from here on forward are permitted to hear and make challenges based on residency,” Kang said. “In many ways, this is the first case of its kind on this particular issue. Its impact will be huge, not just in this case but elsewhere.”

Kang is an attorney for Forward Progress, a civil rights law firm in Durham. She was assisted in the case by Caitlin Swain-McSurely, a lawyer and the stepdaughter of Moore County NAACP president O’Linda Watkins-McSurely.

“My gut feeling was that something was not right about what was going on,” Watkins-McSurely said during the meeting. “We’re celebrating this victory.”

In November 2016, The Pilot reported that the postcard-based residency challenges brought in Moore County included 365 white voters, 92 black voters and seven American Indian voters. Of the challenged voters, 154 were registered as Democrats, 136 were Republicans, 195 were unaffiliated and 10 were Libertarian.

According to a statement from the North Carolina NAACP, the racial breakdown of voters purged in Beaufort County was “disproportionately African American.” In the statement, the Rev. T. Anthony Spearman, president of the association, said it was “fitting” that the recent court order arrived “on the week of the 53rd anniversary of the Voting Rights Act.”

“The odious practice of using mass mailings and undelivered mail to suppress and intimidate voters of color has a long and shameful history in North Carolina,” Spearman said. “(The) federal court decision will ensure that voters are not wrongly disenfranchised on the basis of returned mail.” 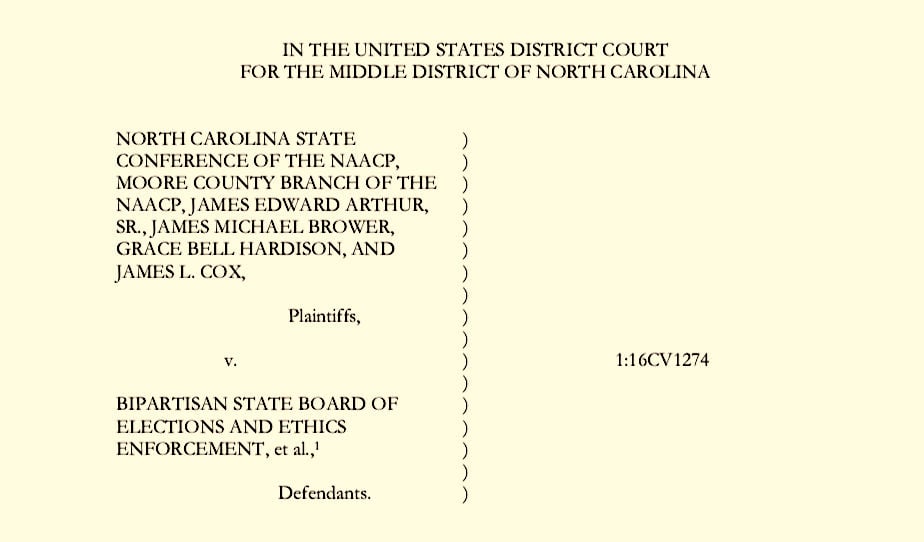 Did the lawyers suggest an alternative means to remove voters from the rolls who have moved to another county or who are deceased? It only takes one vote to decide an election. Voters must be US citizens residing in the county where they are registered - it’s pretty simple really. You’d think that if this were a real problem the NAACP would have received support from the ACLU, NCGOP, Moore Tea, League of Liberal Women Voters, etc. There are many who try very hard to perpetuate the myth of voter suppression in the South. One has to wonder what they hope to gain.